St. LOUIS • The airport terminal hummed with the happy tension of 4,000 giddy people. Homemade signs bobbed above the crowd. It seemed that everyone, and everything, was festooned in yellow.

The Ozark Air Lines charter jet circled Lambert-St. Louis International Airport so its passengers could see a bright ribbon on the control tower. The DC-9 touched down at 1:35 p.m. on Jan. 28, 1981.

Marine Corps Sgt. Rodney "Rocky" Sickmann, one of 52 Americans held hostage in Iran for 444 wrenching days, was back in Missouri.

"Freedom is everything, and we have it," Sickmann, 23, shouted heartily. The band from Washington (Mo.) High School, Sickmann's alma mater, belted the theme to the movie "Rocky" and the Marine Corps Hymn. Well-wishers chanted "U-S-A." 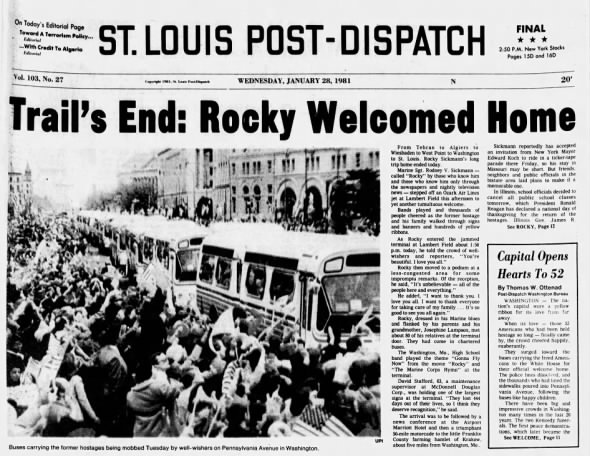 Sickmann grew up in Krakow, a community south of Washington, Mo., and was captain of his high school football team. He joined the Marines after graduation. In a letter to his parents dated Oct. 12, 1979, he said guard duty at the U.S. embassy in Tehran, Iran, was a pleasant gig.

Sickmann's parents, Virgil and Toni, waited nervously by the phone and prayed quietly at St. Gertrude, their parish church. "You learn to live with it after a while," Mrs. Sickmann said bravely.

For most Americans, the low point was April 24, 1980, when an aviation accident in the Iranian desert killed eight members of an aborted military rescue mission.

Carter lost the election that November to Ronald Reagan. The Sickmann family went into seclusion as negotiations suddenly picked up. Iran didn't release the hostages until Jan. 20, 1981, Reagan's inauguration day.

Then it was a swirl of happy times. The Sickmanns met their son at West Point, N.Y., on Jan. 25. Jill Ditch, his hometown sweetheart, rushed him with a hug in Washington two days later. They all flew home on Ozark.

From Lambert to Krakow, cheering strangers waved from bridges. Trucks from Valley Material Co., where Rocky's dad worked, parked on the highway shoulder in salute.

Utility poles were bound in yellow. More than 400 people waited at the house, ringed by yet another giant ribbon. Even his dog, Luke, sported the color.

"Is this Krakow?" he asked, thrilled to be there.

Rocky and Jill were married eight months later.  Rocky later directed military sales for Anheuser-Busch InBev. Both of his parents died in 2010.

A look back at the Congressman who made Missouri the show-me state, or so the tale goes

A congressman's quip during a social gathering in Philadelphia gives life to the show-me boast, although others claim first utterance.