ST. LOUIS • Darren Boutette is an ordinary Canadian IT professional who last month got pulled into a quest more than 36 years in the making—and it led him all the way to Forest Park.

Boutette is one of hundreds who have become enamored with a mystery embedded in a 1982 fantasy book, “The Secret: A Treasure Hunt.” To promote the book, publisher Byron Preiss buried 12 ceramic “casques” encased in Plexiglas about 3½ feet deep in city parks throughout North America.

Each held a key that could be exchanged for a jewel worth about $1,000. Readers could find clues leading to the troves through a series of illustrations and cryptic verses in “The Secret.”

Boutette heard about the hunt through a TV special and was hooked.

He spent hours puzzling out the clues, eventually creating a 22-page document explaining his theory that one of the long-hidden treasures is buried in a quiet corner of Forest Park here.

He wanted to claim the prize and called the St. Louis parks department to ask permission to dig — only to find he was far from the first.

“We get at least a call a month from a different person about digging for the treasure,” said Parks Commissioner Kim Haegele. “It’s been happening for years.”

Haegele said each caller is confident they’ve finally cracked one of Preiss’ riddles. They all say somewhere in the 1,300 acres of Forest Park lies the key.

“Of course they all think it’s in wildly different spots,” she said. “If they even tell us where it is, some people won’t because I guess they think we might go dig it up ourselves.”

The callers are all part of an unlikely cult following for “The Secret.”

To this day, two casques have been found: One was dug up a year after the book was published by three enterprising teenagers in Chicago. The other was found by a lawyer in Cleveland in 2004.

Deciphering Preiss’ elaborate clues requires knowledge of history, local landmarks and mathematics. Some have rented ground-penetrating radar, scoured historic records and exchanged more than 35,000 discussion posts on the web forum quest4treasure.co.uk that can get so complicated they need 20-minute YouTube videos to explain.

The hunt even has its own documentary, directed by James Renner.

Park staffers across the country are well-aware of “The Secret.” Some cities banned the hunters after finding mysterious 3½-foot-deep holes. San Francisco’s Golden Gate Park created a special permit application for all the people asking to dig.

Unfortunately for people such as Boutette, St. Louis isn’t quite so accommodating when it comes to its premier park.

Boutette was disappointed that all his research may go to waste, so he decided to email a Post-Dispatch reporter about his quest.

“I’m 95% confident I can narrow the search down to about a six-foot square of grass in the park,” he wrote. “I’d be willing to share my research with you along with the exact location in confidence and I’m sure you would agree that it’s compelling.”

The email seemed far-fetched at first, another among many unusual messages that arrive in a newsroom. Eventually, this reporter fell down the rabbit hole that is “The Secret,” considering internet treatises, researching Forest Park and looking for clues everywhere.

“The Secret” book was part of a niche literary genre known as “armchair treasure hunts” that began in 1979 with the surprise hit “Masquerade” by Kit Williams, which promised a golden rabbit figurine to any reader who could find it from clues in the text.

Preiss published “The Secret” a few years later, and the first puzzle was solved within a year by Eric Gasiorowski, Rob Wrobel and David James in Chicago.

Playing out like some sort of nerdy 1980s teen movie, the three were able to identify one of the illustrations as Chicago after noticing it included a rough outline of Illinois and a building similar to the Chicago Water Tower.

One of the verses mentioned Congress, a street near Grant Park near where “L sits,” referring to a statue of Abraham Lincoln nearby. The rest of the verse served like a map leading them to the spot where they found the container after months of digging.

Preiss sent them an emerald in the mail.

Then came 21 years of silence, until New Jersey lawyer Brian Zinn revisited his childhood fascination with “The Secret.”

In 2004, Zinn located a casque in Cleveland from a verse that mentioned Socrates, Pindar and Apelles. With the added benefit of the internet, Zinn searched the names and found they were etched into a pylon at the Cleveland Cultural Gardens. He traveled to the garden and, after four hours of digging, found the casque buried along a wall. He won a jewel.

Preiss died in car crash the next year at age 52. He never told anyone where he buried the 10 remaining casques, but his widow, Sandi Mendelson, says she will award jewels to those who solve his puzzles.

Boutette said he was willing to travel from Canada to St. Louis to try for the prize, but he won’t go without the park’s blessing.

“I’m a natural rule-follower,” he said.

Like most prospective solutions for “The Secret” — even the right ones — there are connections that are immediately convincing while others you need to tilt your head and squint a bit to make them fit.

Boutette’s theory is no different.

A couple of months ago, he began to study the book’s “Image 9,” a portrait of a man in a checkered hat reminiscent of a Rembrandt self-portrait.

Boutette focused on that image first because many hunters believe it leads to Montreal — making it the closest to where Boutette lives. An image of a hoof coming out of a dog’s mouth in the man’s collar matches a lamp in the city.

But Boutette was not convinced. The symbol, known as the leg-eater, was originally an Italian image and was likely in many other cities, he thought.

He studied Image 9 and noticed what appeared to be a musical note in the man’s collar, just like the symbol for the St. Louis Blues hockey team.

The man also wears a checkered hat roughly the shape of the old Checkerdome where the Blues once played. Team symbols were included in the Chicago puzzle, so Boutette thought he might be on to something.

The rest of Boutette’s theory is complex. He matched the illustration with one of the book’s verses he believes leads to the Korean War Memorial in Forest Park.

“At stone wall’s door / The air smells sweet,” the verse reads. Boutette says this makes reference to the Vandeventer Place Gates, a stone wall that was once the entrance to a grand St. Louis home placed in the park in the 1940s.

The gates are near the Korean War Memorial, which is today a large sundial. When the casques were buried, however, the memorial was a large floral clock that would “smell sweet.” The clock was replaced in the late ’80s after it fell into disrepair. 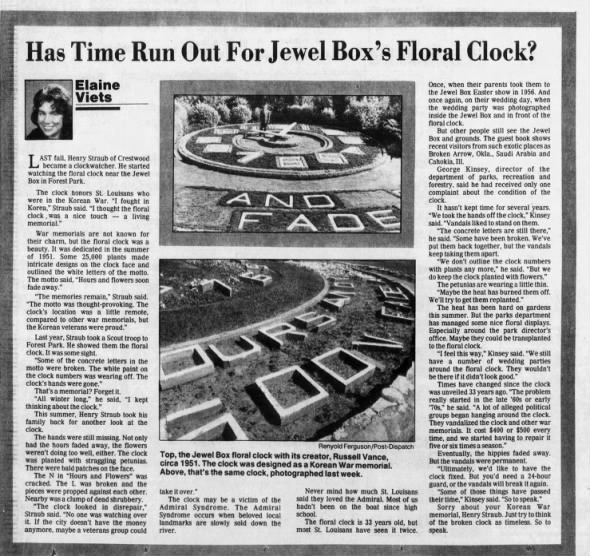 The verse continues: “Not far away / High posts are three / Education and Justice …” Boutette believes “Education” references the nearby golf “course” while “Justice” is the tennis “court.”

There are also lines directing the reader, “in jewel’s direction,” which Boutette thinks refers to the nearby Jewel Box.

The verse then refers to “an item of Twain’s attention.”

Boutette believes the reference to Twain is significant because the author was born in Missouri and guesses the clue might direct the hunter to the floral clock.

Twain did write about a broken watch in a short essay, but he was so prolific that many theories have emerged about what an “item of his attention” might be.

In the end, Boutette believes the casque lies in a spot where an old flagpole once stood based on the ending of the verse: “Giant pole / Giant step / To the place / The casque is kept.” 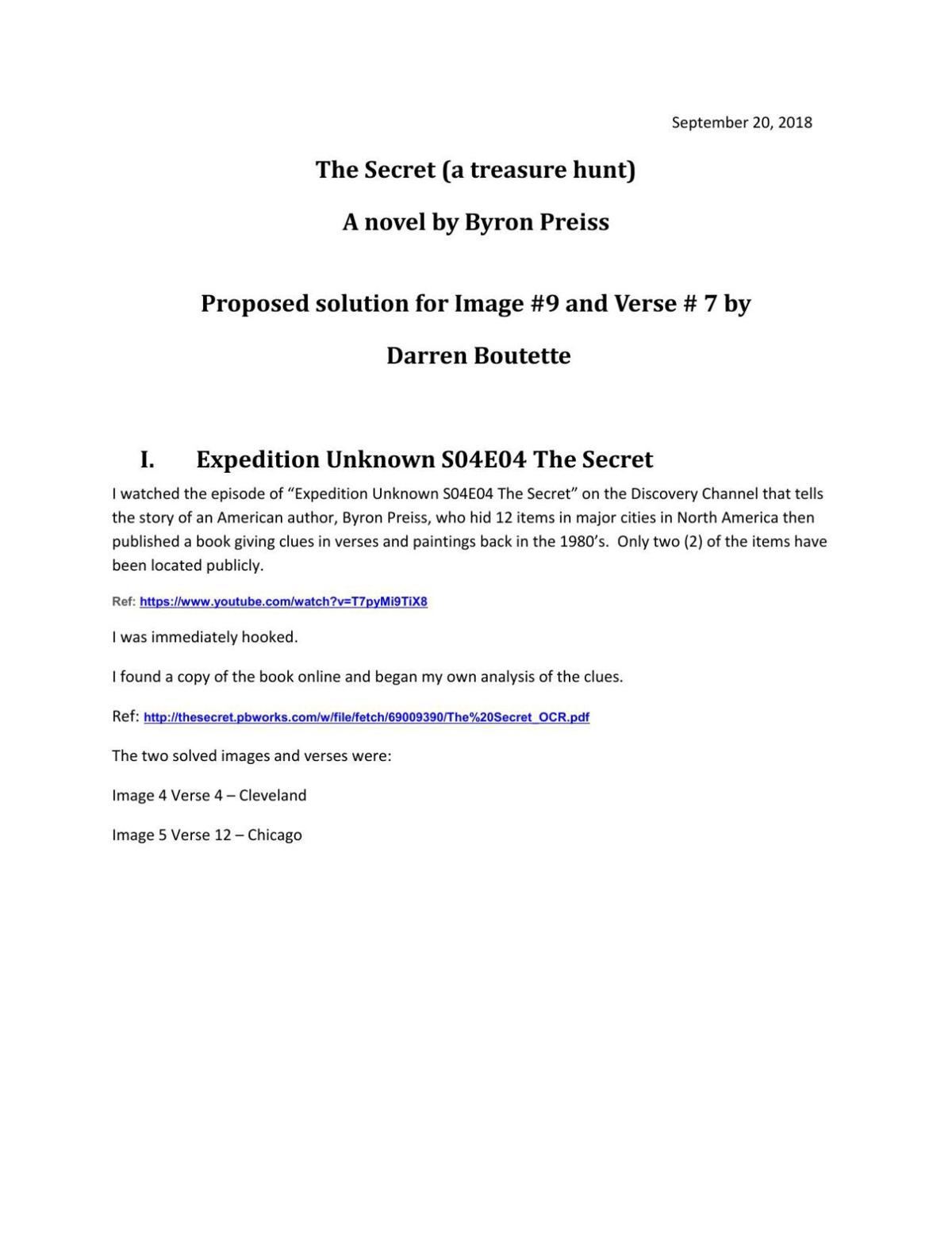 ‘The place the casque is kept’

Close inspection of the area around the Korean War Memorial today shows no sign of the mysterious leg-eater symbol. No other clues emerged.

It’s clear the landscape has changed since the unconventional book publisher buried his casques. Even if one is buried here, it may never be found.

But the peaceful spot, less visited than other Forest Park attractions such as the Muny or the zoo, suddenly becomes imbued with possibility when you know about the theory. Could any tree, stone or nearby landmark hold a clue?

That may have been Preiss’ goal, according to the documentary filmmaker who has studied “The Secret.”

“Byron did this because he wanted kids to go out and see the places where they are from,” Renner said. “It’s not about the buried treasure — it’s about the world around you.”

For some, it’s also about the pride of the hunt.

“I did want the jewel. That would’ve been nice,” said Boutette. “But I’m just glad my theory is getting out there.” 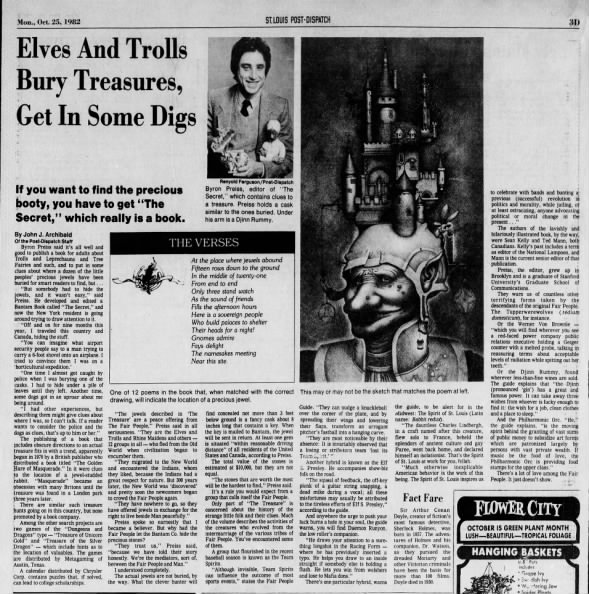 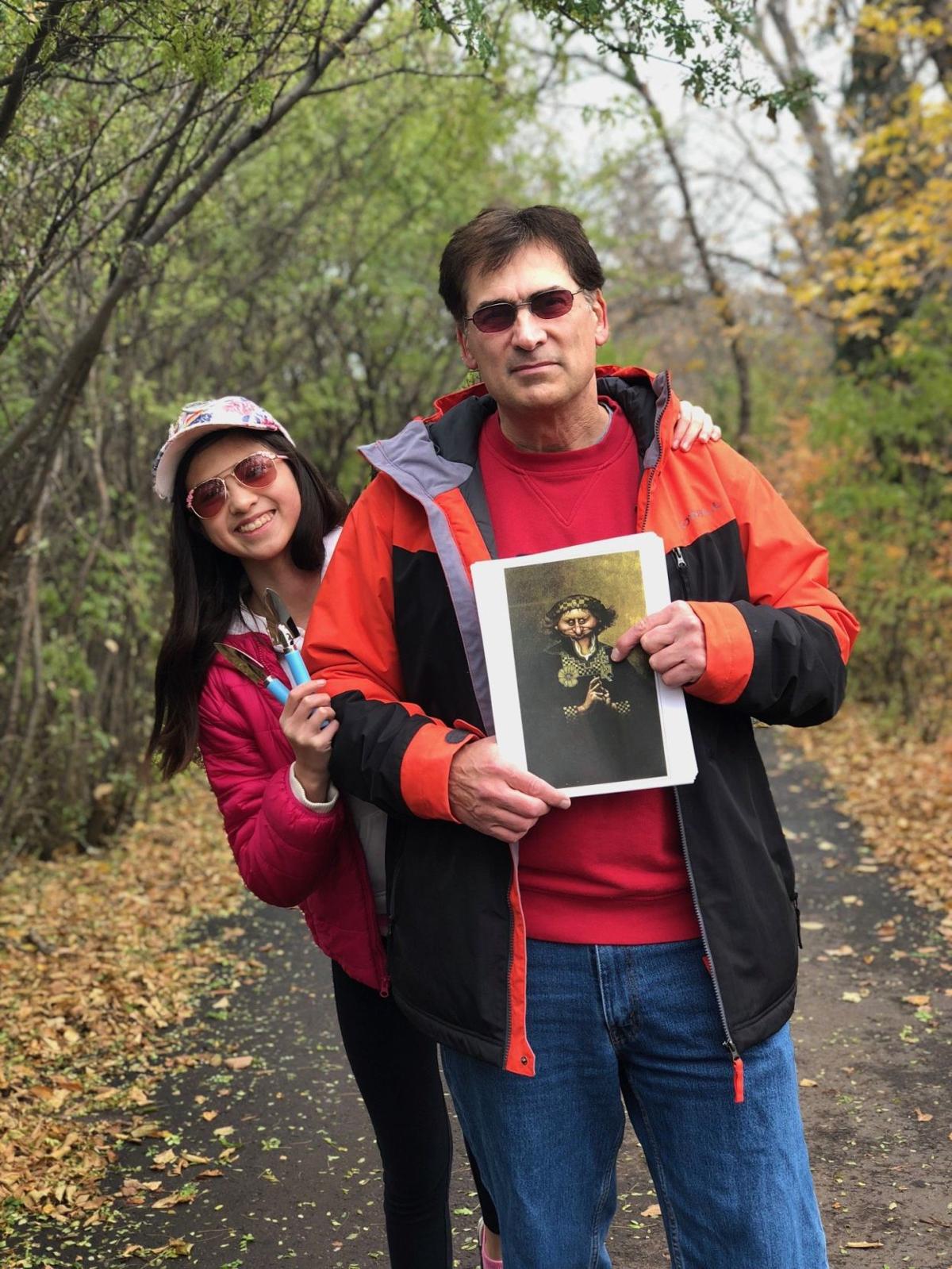 Treasure hunter Darren Boutette and his 13-year-old daughter Katie pose in September 2018 with a drawing from "The Secret: A Treasure Hunt" which he believes leads to a buried treasure in St. Louis' Forest Park. Photo courtesy of Darren Boutette. 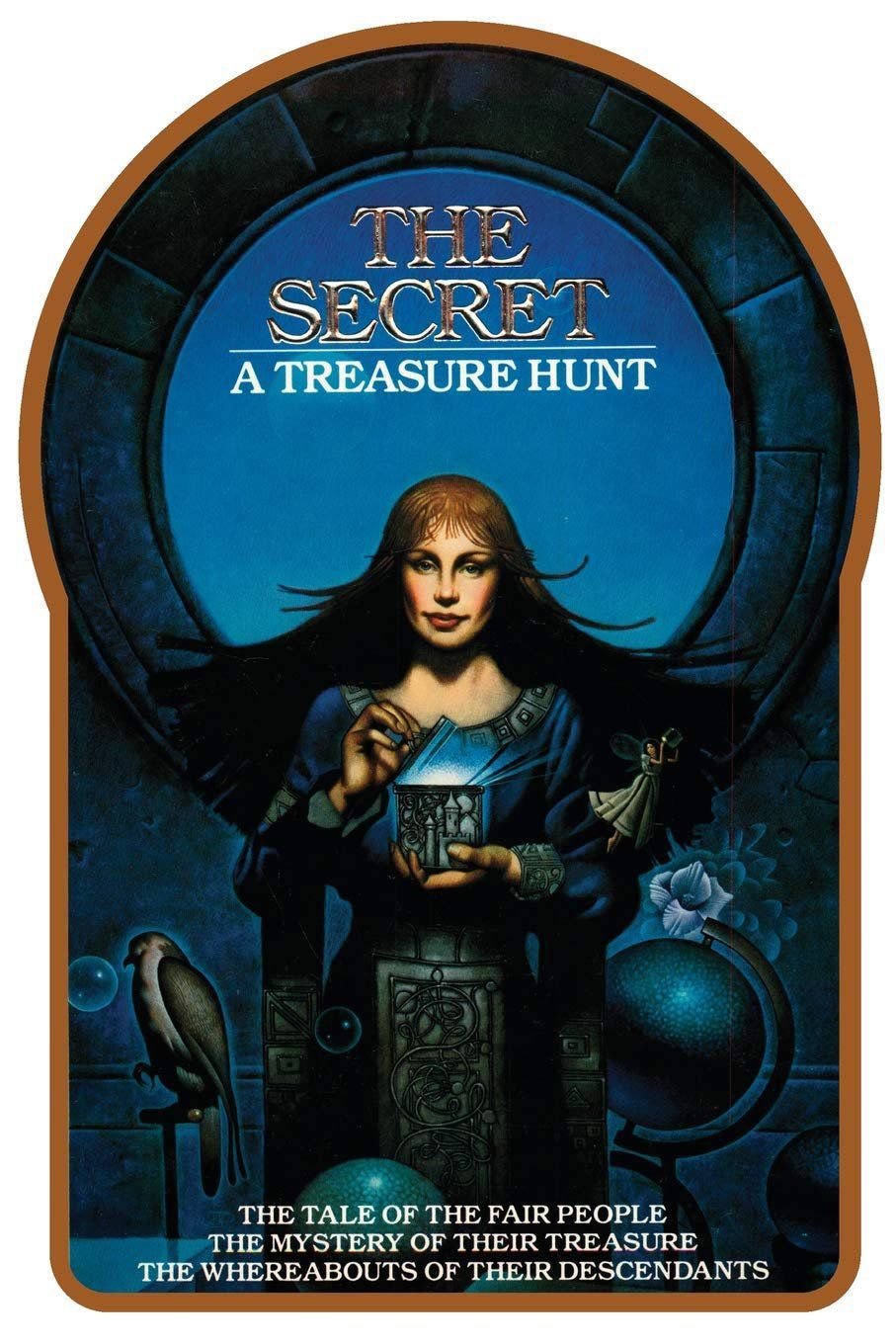 "The Secret: A Treasure Hunt" was originally published in 1982 by Byron Preiss during a trend of "armchair treasure hunts." The book set off a hunt for 12 ceramic casques hidden in 12 North American parks that has lasted 36 years, though only two have been found so far. Each holds a key that can be exchanged for a jewel worth about $1,000. Photo courtesy of iBooks. 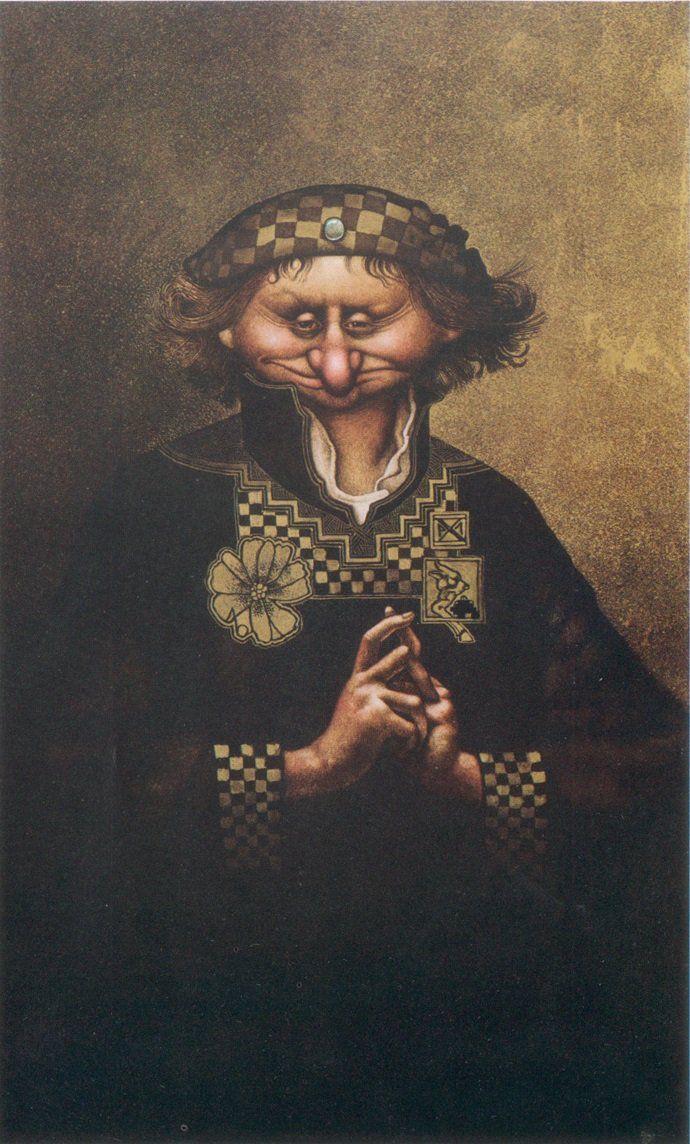 This illustration from "The Secret: A Treasure Hunt" published by iBooks may offer clues to a buried treasure in St. Louis, according to some treasure hunters. Others say it leads to Montreal, Canada. Clues in the image that indicate St. Louis include the checkered hat, possibly referencing the old Checkerdome and a music note similar to the St. Louis Blues symbol. Some versions of the image also include a Fleur-de-Lis which is featured on the St. Louis flag. Photo courtesy of iBooks.