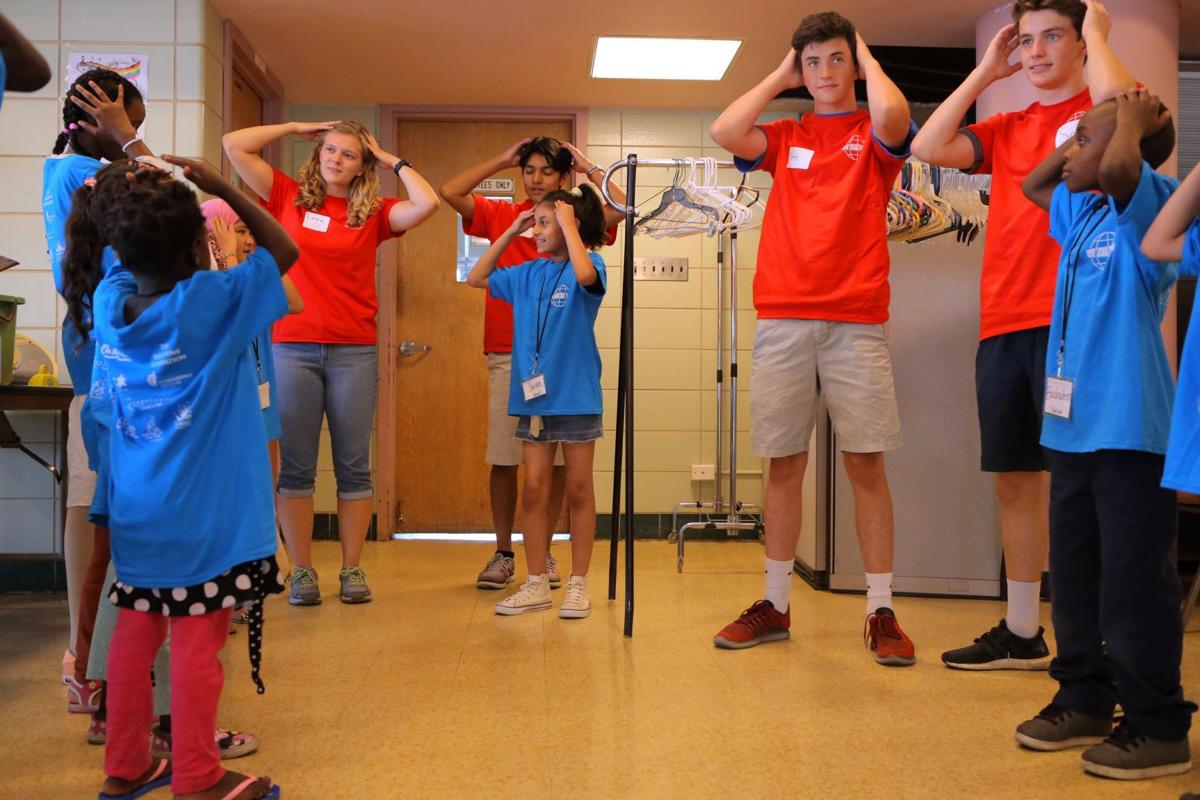 Children and counselors play a game of "Head, Shoulders, Knees and Toes" at a new summer camp for refugee children held at the International Institute of St. Louis, 3401 Arsenal Street, on Monday, July 10, 2017. Photo by Cristina M. Fletes, cfletes@post-dispatch.com. 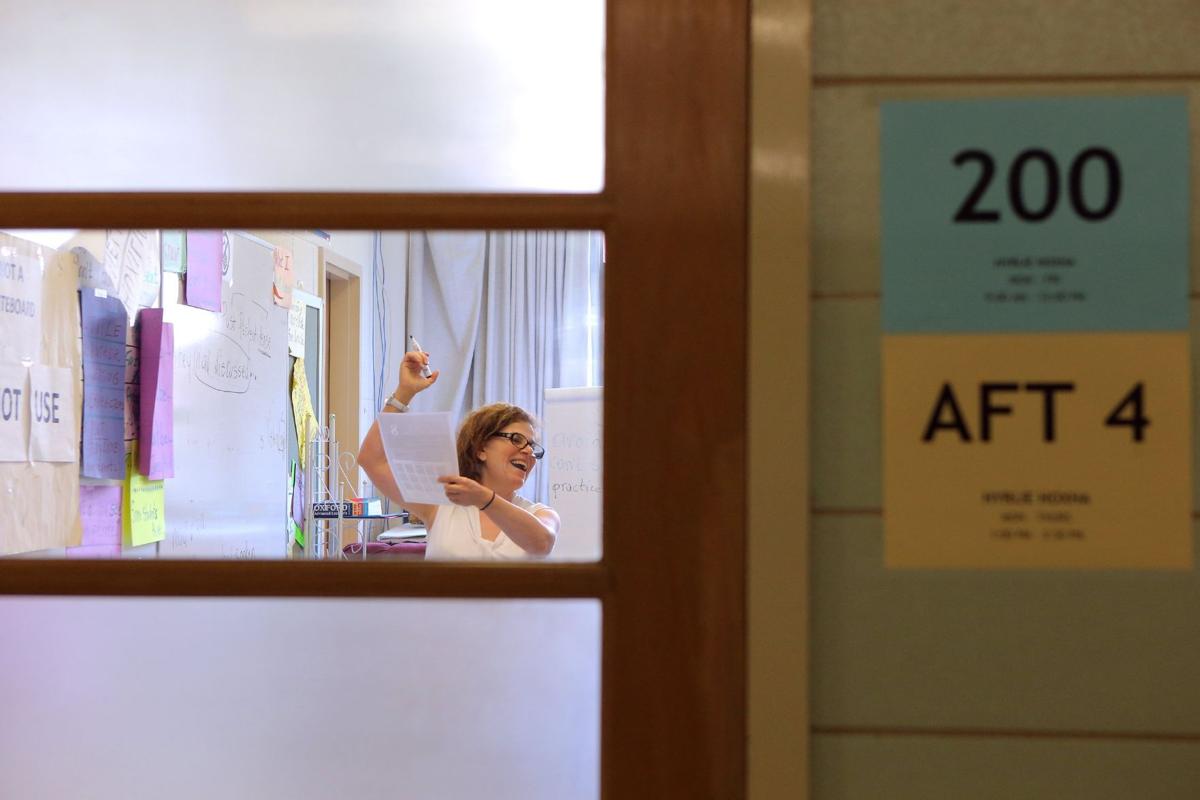 Hyrije Hoxha, an English as a second language teacher, instructs a group of parents while their children attend a new summer camp for refugee children held at the International Institute of St. Louis, 3401 Arsenal Street, on Monday, July 10, 2017. Photo by Cristina M. Fletes, cfletes@post-dispatch.com.

ST. LOUIS • Dr. Gary Sherman fitted the 11-year-old Sudanese boy with a stethoscope and demonstrated how to use it.

“What do you hear?” Sherman asked the young refugee, who tentatively studied the medical device, moving the round metal chest piece under his shirt.

He paused, looked up and pointed to his heart.

The boy was in an anatomy class during the first day of summer camp at the International Institute of St. Louis, a new addition to the agency’s services to help refugee families settle here.

“This has always been a gap in our services,” said Anita Barker, director of education. Attendance for adults enrolled in English classes at the institute historically drops during the summer because the parents have no organized activity for their children. Certainly not one they can afford.

“This is a chance for family to be in a safe learning environment together where the parents don’t have to worry about their children and can focus on their English,” Barker said.

The free camp, which began Monday and runs for four weeks, is held on the lower level of the institute; a floor above, the parents take English classes, one of the requirements to coming through the U.S. refugee resettlement program.

Among the counselors at the camp is Stan Shanker.

Like many Americans, Shanker was moved by the plight of Syrian refugees, watching news reports of families risking their lives as they fled to Europe. But it was not until he heard a sermon by his rabbi during the High Holidays in 2015 regarding the civil war that has killed at least 300,000 and displaced 11 million that Shanker decided he had to get involved in some way. He attended a volunteer orientation offered by the institute and then became involved with the agency’s refugee home visit program.

The more time he spent with families, the more he realized they could use help getting acclimated. He shared his experiences with other members of Shaare Emeth and met with the temple’s tzedek (justice) committee.

“This is where we need to be,” Shanker told the committee — in the community helping new Americans.

With the temple leaders on board, the number of congregation volunteers grew to more than 60, working pot luck lunches, a winter carnival and a free day at the Magic House for 110 refugees.

“The Jewish community overwhelmed the International Institute with ‘how can we help?’” said Alyssa Banford, program and engagement associate with the Jewish Community Relations Council. The institute mentioned the need for a summer camp that had always seemed out of reach because of funding and staffing challenges. The council gathered volunteers and funding and made the wish a reality.

As well, the Jewish organization has created a New Americans committee that will continue looking at ways to support St. Louis refugees and immigrants.

“This is just part of our DNA,” Bram said. “We’re commanded to welcome strangers.”

Bram’s grandparents were from Russia and Germany, her parents first-generation Americans.

The first week of summer camp is focusing on people of the community, which included Monday’s visit from Dr. Sherman, a retired pediatrician. Other expected visitors this week include a police officer, dentist and firefighters.

The curriculum is designed to mirror what the parents are being taught in English classes so the family can go over together at home what they have learned at the institute, Banford said. Upcoming weeks will focus on animals and colors, with a petting zoo and bubble truck as highlights.

The last week of camp is titled: “I Am an American.” The children will learn about the U.S. flag and what it represents. They will make red, white and blue bracelets and patriotic hats and parade around the agency’s campus in Tower Grove East.

An ice cream truck and game of whiffle ball also are on tap.

Barker said she explained to refugee parents that summer camp is an American tradition but almost always comes with a cost and the anxiety of vying for an open slot.

“I tell them: ‘This is a gift to your family,’” Barker said.

On their first day, the 40 children ages 5 to 12 learned the Hokey Pokey and how to play chess, checkers and bingo.

Two girls from Afghanistan, ages 10 and 12, giggled as they traced each other on pieces of butcher paper. The purple crayon outlines were then colored in with faces, arms and clothing, ready to show off to their parents.

Rhonda Banford, a speech pathologist, and her husband, Dave, a retired electrical engineer, are among the 100 volunteers who have signed up to help during the four-week camp.

“I’d venture to say we are all immigrants, and the thought of putting limits on immigrants …,” Banford said, referring to a ban on refugees from some Muslim-majority countries.

“We should all be doing our part to make sure our immigrants are well taken care of.”

Stan Shanker, founder of a camp for refugee children, speaks about the activities the children will be doing during the camp.

Children and counselors play a game of "Head, Shoulders, Knees and Toes" at a new summer camp for refugee children held at the International Institute of St. Louis, 3401 Arsenal Street, on Monday, July 10, 2017. Photo by Cristina M. Fletes, cfletes@post-dispatch.com.

Hyrije Hoxha, an English as a second language teacher, instructs a group of parents while their children attend a new summer camp for refugee children held at the International Institute of St. Louis, 3401 Arsenal Street, on Monday, July 10, 2017. Photo by Cristina M. Fletes, cfletes@post-dispatch.com.