CREVE COEUR — Members of Congregation Temple Israel light up when they tell the remarkable story of how they came to serve hundreds of Thanksgiving dinners each year for people without a place to go on the holiday.

Now in its 34th year at the Creve Coeur temple, the dinner this time around will be reimagined from its typical 450-person buffet as the coronavirus pandemic requires a new approach.

But first, some history.

The dinner has its roots back 85 years in another time of global upheaval before World War II.

In 1935, Ernest Wolf, a German gentile student attending Washington University in St. Louis, received a letter informing him he was conscripted to serve in the German military. Wolf did not want to enlist under the Nazis and planned to seek asylum in Mexico, according to the story passed down by Temple Israel leaders to today’s rabbi, Amy Feder.

Without the money to get to Mexico, a desperate Wolf went door-to-door at religious houses along Kingshighway in St. Louis until he reached Congregation Temple Israel, then located in the city. There, Rabbi Ferdinand Isserman agreed to give him the $300 he needed to evade the Nazis. Wolf was able to stay safely in Mexico through the war.

Some 50 years later, the rabbi’s act of kindness was repaid.

In 1986, Wolf sent Temple Israel a check for $50,000 with a note explaining the story and asking the temple to “do good” with the funds. The head of the temple at the time, Rabbi Alvan Rubin, wanted to use the windfall to create an event that could help both his congregants and people outside the faith and landed on creating a meal for those in need or isolated on Thanksgiving.

Through more donations and the work of hundreds of volunteers, the event grew to serve nearly 500 people each year, the type of large gathering that now seems surreal during the ongoing pandemic.

Still, Rabbi Feder and a team of volunteers led by Melissa Susman and Mark Biernacki was determined to have the tradition continue in 2020.

Feder said it’s the one event of the year where people in the congregation compete for volunteer spots.

“It’s a highlight of the year here,” Feder said. “There might be 150 volunteers but we usually have to close the sign-up because so many people want to help with it.”

The event is also a mainstay for people served by St. Louis-area social service agencies like women’s shelters, the homeless, recent immigrants and seniors.

In a typical year, buses bring the attendees to Temple Israel’s event hall where they eat a full Thanksgiving meal on china sets and tablecloths while they are entertained by string music performed by Ladue Horton Watkins High School students.

When the pandemic overtook daily life this spring, the congregation decided instead to deliver more than 350 pre-packaged meals to those who normally attend.

“It’s hard because you begin to recognize some people year after year, and so this year we won’t see them,” Feder said. “But our main priority was to make sure our guests still feel our love and have a delicious meal.”

Usually it’s a task for dozens of volunteers, but Jennings limited the effort to her paid staff of five who worked in masks to reduce the number of people in close contact this year. The staff of six packaged up each meal individually and added in masks handmade this year by a volunteer for the kids getting dinners.

“It’s a lot of work, even when you have all the volunteers” Jenning said. “I go home so tired everything hurts, but it doesn’t matter, it really doesn’t. When COVID hit I knew we had to find a way to do this.”

She added, “This is that special. It’s one of the biggest ‘pay it forwards’ I’ve ever heard of so we’re not going to let a pandemic stop it.”

The St. Louis region's four major hospital systems now have systems for residents to sign up for COVID-19 vaccines.

Experts generally now say the virus will spread, in lower numbers, for years to come.

St. Louis County officer, his life on the streets behind him, gives aid to the homeless

Officer Thomas Crees was homeless himself in 2014, sleeping in his Jeep or sometimes in a public park before finding his way to law enforcement.

The proposal, backed by the powerful firefighters union, comes as many aldermen face reelection and the mayoral campaign heats up.

The expansion brings the total of Mercy pharmacies to 34 in the St. Louis region and 48 across Mercy’s four states.

The crash happened on Highway PP and Highway 30. 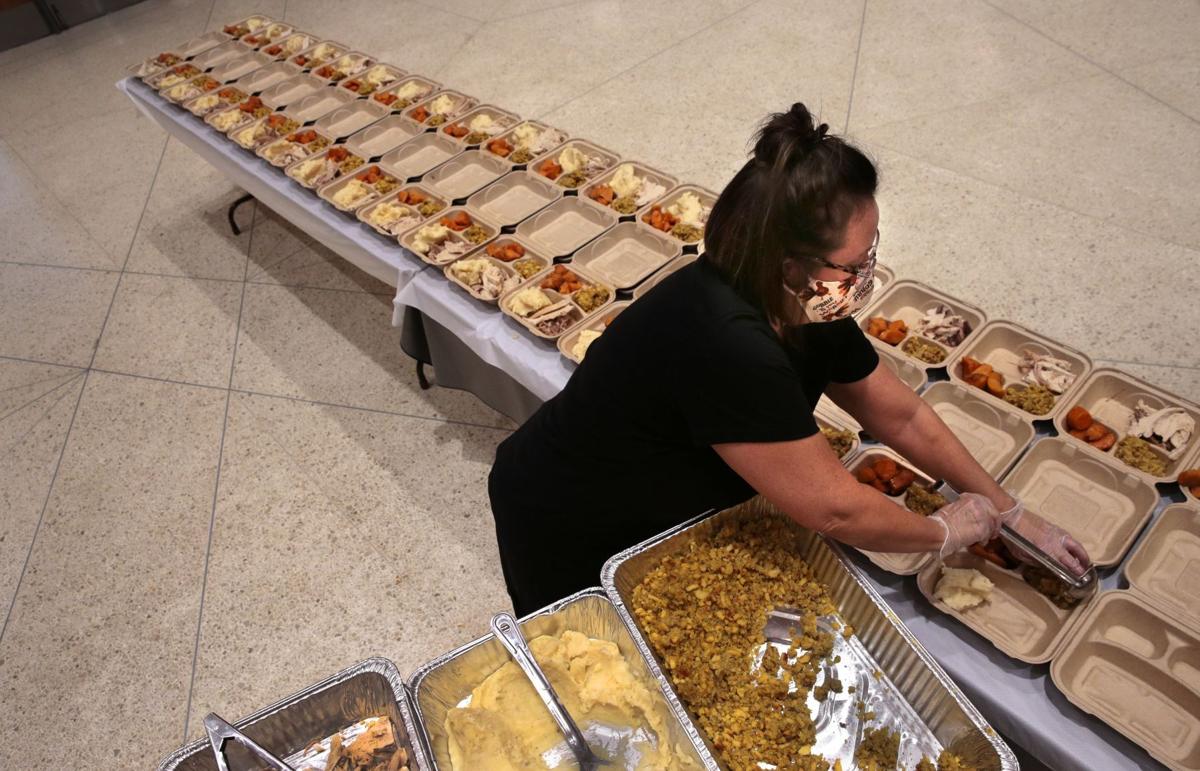 Catering staff member Christy Riffel packages 125 Thanksgiving for the hungry at Congregation Temple Israel in Creve Coeur on Tuesday, Nov. 24, 2020. Traditionally 100 volunteers would work at the temple to serve a sit-down meal to more than 350 people for Thanksgiving, but this year coronavirus limitations have them shipping meals off to various groups. "The downside is you don't get to see the joy on everyones faces," said Riffel. Photo by Robert Cohen, rcohen@post-dispatch.com 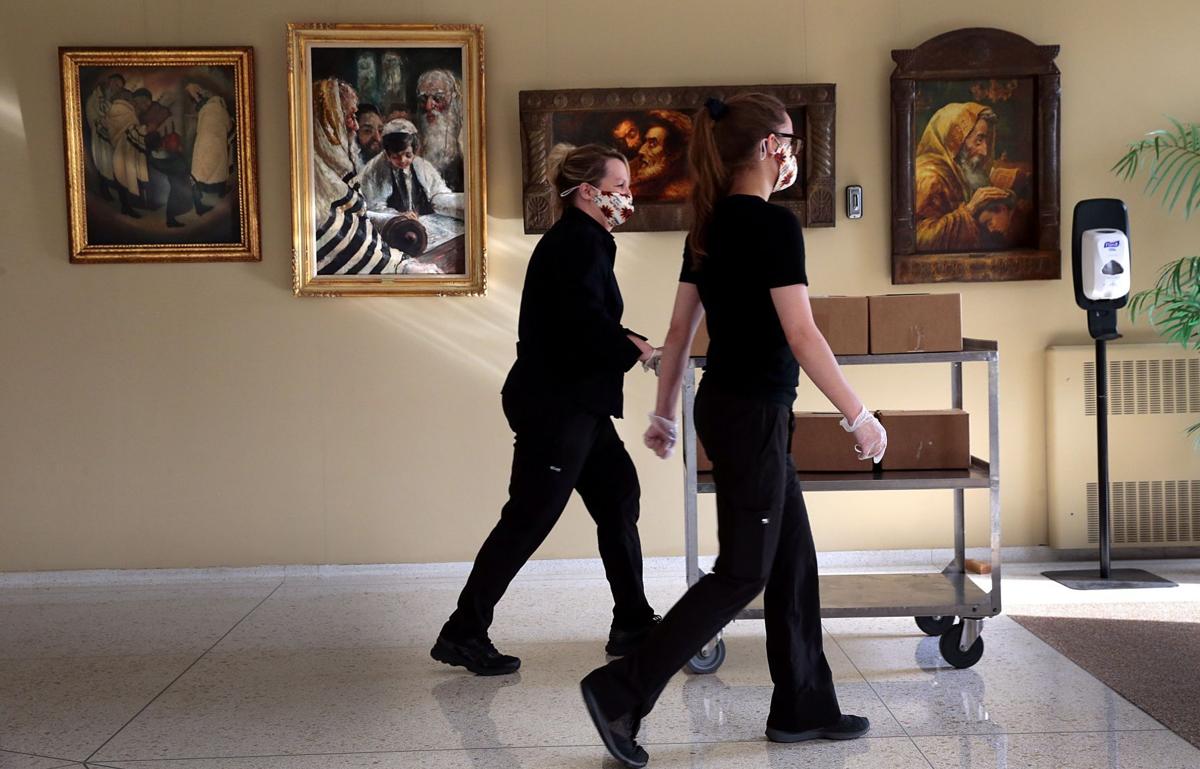 Catering manager Debbie Jennings, center and staff member Morgan Berry wheel packaged Thanksgiving meals to transportation after preparing 125 meals for the hungry at Congregation Temple Israel in Creve Coeur on Tuesday, Nov. 24, 2020. The temple traditionally has about 100 volunteers preparing and serving a sit-down meal to more than 350 people in need, that are bussed to the synagogue, but with coronavirus limitations only certified kitchen staff are cooking and packaging the meals for various groups to eat. Photo by Robert Cohen, rcohen@post-dispatch.com 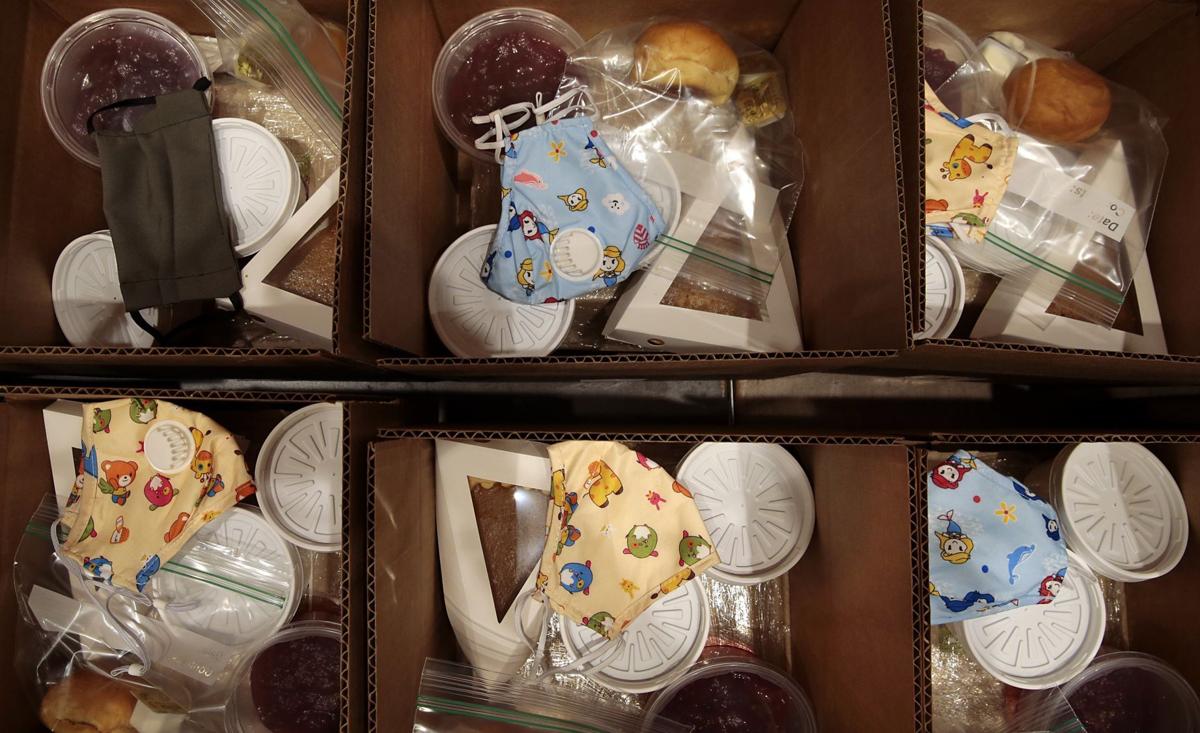 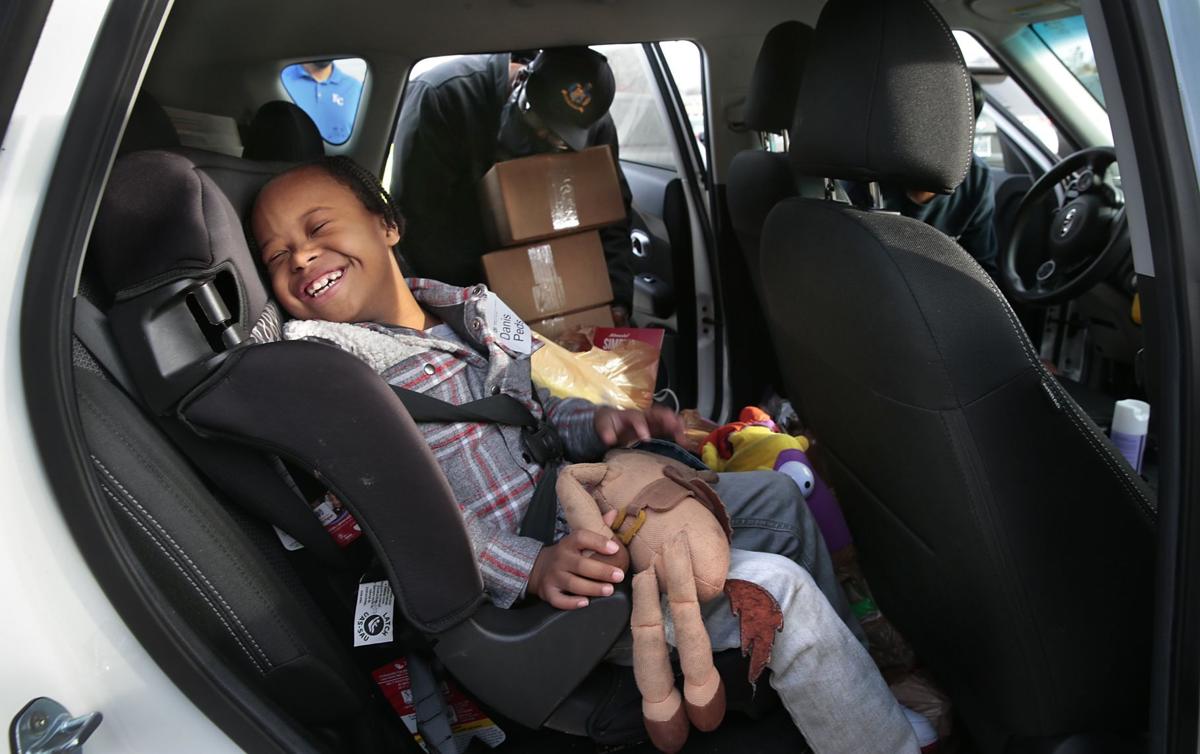 Jordan Darby smiles as Derrick Bryant loads boxes of Thanksgiving meals for Jordan's mother Leila Burgess and her family at Stix Early Childhood Center on Tuesday, Nov. 24, 2020. Bryant is facilities supervisor at Congregation Temple Israel in Creve Coeur where the catering staff made 125 Thanksgiving meals to feed Stix families. For 30 years the temple has used 100 volunteers to feed more than 350 people a sit-down meal for Thanksgiving, but coronavirus restrictions shifted that effort to packaged meals. Photo by Robert Cohen, rcohen@post-dispatch.com 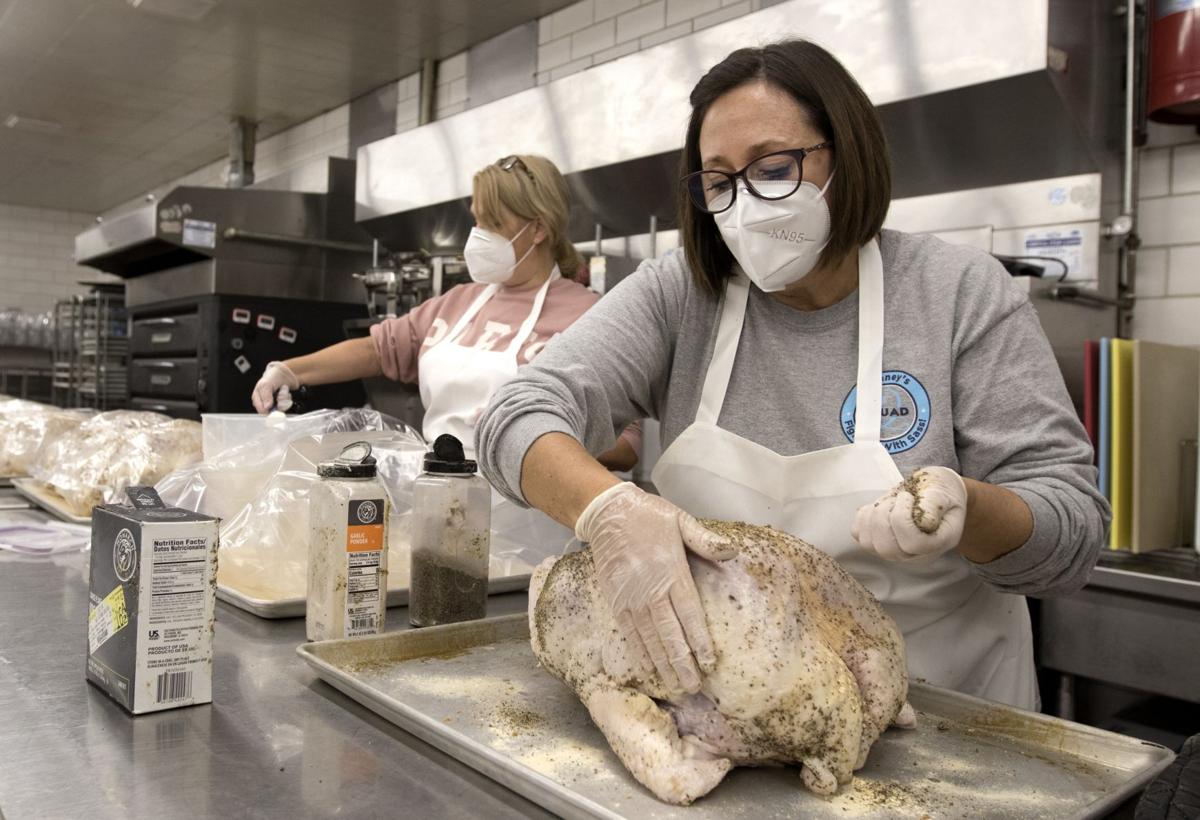 Christy Riffel, front, and Kelly Henroid, back, work to season turkeys before they are cooked at the Congregation Temple Israel in preparation for the annual Thanksgiving Dinner for Those in Need event on Sunday, Nov. 22, 2020. The 34th annual event that usually brings families together to eat is changing this year because of COVID-19 restrictions. Instead, the dinners are being packaged and delivered. Riffel and Henroid spent around 12 hours cooking 18 turkeys for the families. Photo by Christine Tannous, ctannous@post-dispatch.com