CLAYTON — After a long-delayed update to St. Louis County’s building codes late last year, environmental groups and the home building industry are lining up behind different candidates in the August primary election that will determine the balance of power in St. Louis County.

The Home Builders Association is putting big money behind its endorsements, contributing $250,000 to the Change STL political action committee supporting Mantovani — a sum that dwarfs the amounts the group typically contributes to candidates. The HBA also contributed $25,000 to the Accountability Matters PAC supporting Glantz, an architect who is a member of the association.

On the other side, the Missouri chapter of the Sierra Club has endorsed St. Louis County Executive Sam Page along with County Councilwoman Kelli Dunaway in the 2nd District Democratic primary, in part for their support of updated energy efficiency requirements in the new building codes that took effect Wednesday. The Sierra Club’s PAC has not yet made any donations to those candidates.

Mantovani and the HBA say they never discussed the building code issue. But Dunaway and the Sierra Club say their push for updated energy efficiency requirements — and the Page administration’s tacit approval of their involvement — has drawn the ire of an interest group not used to having to negotiate with environmentalists.

The issue arose late last year when Dunaway, elected in August to fill Page’s seat after he became county executive, sought to advance the 2018 version of building codes. That version was the most current released by the International Code Council, which updates the codes every three years.

St. Louis County was still working from the 2009 codes. A version of the 2015 codes, amended by the St. Louis County commissions that review the International Code Council updates, was never enacted despite being sent to former St. Louis County Executive Steve Stenger in 2017.

St. Louis County’s size means the code it adopts influences other local governments in the region. While the region’s dozens of municipalities can adopt their own building codes, many follow St. Louis County’s code because they contract with it for building inspections and other services.

It’s the portion dedicated to energy efficiency in new construction, the International Energy Conservation Code, that tends to generate the most debate.

In the past, those energy efficiency requirements have drawn opposition from local home builder groups because they add upfront expenses that may make new homes too costly for some buyers. Environmental groups meanwhile lobby for the energy efficiency codes as the international council writes them. Many jurisdictions do adopt the codes with few amendments, including Illinois, which has adopted the 2018 codes statewide, and the Sierra Club points out some St. Louis area builders operate on both sides of the Mississippi River.

After Dunaway introduced a bill in November to adopt the 2018 codes, St. Louis County Councilman Mark Harder, R-7th District, introduced legislation to pass the amended 2015 codes that had been sitting on the shelf. But the effort by Harder, who is in the housing industry himself, failed on a 3-3 party-line vote.

For the Page administration, there was some urgency to adopt some sort of building code update in order to keep the county’s insurance rating from getting dinged for outdated codes.

Dunaway pushed for a compromise and brought the Sierra Club into negotiations with the HBA to hash out a deal for an amended 2015 code. It was approved by the council unanimously in December. Though the new codes are expected to add several thousand dollars — estimates vary — to the cost of a new home, the Sierra Club says the new code is 15% more energy efficient​ and new homebuyers will save an estimated $250 annually on utility bills.

Waddell Barwick said the Sierra Club made concessions in areas such as wall insulation, but “we were happy to make this concession with the understanding that we’d come to the table again” for local adoption of the 2021 version of the international codes, expected to be released late this year.

Dunaway, who said she adopted the issue to be a “champion for the environment,” believed the compromise was a good one because “nobody got everything they wanted.”

“That was the end of it, I thought, until I saw how much money was going to my opponent’s PAC,” she said. “I was truly surprised and continue to be surprised by such virulent special interest opposition to an issue that I thought was pretty mainstream.”

She and Waddell Barwick said the Page administration, while supportive of their positions, stayed mostly on the sidelines through the negotiations. Page’s spokesman said in an email that the county executive supported the December building code deal and also supports beginning a review of the 2021 codes when they are released.

Glantz, though, said the building code review process was “hijacked” when Dunaway got involved last year. He sits on the St. Louis County Building Commission, one of the committees that reviews the codes, and he supported the stalled 2015 code update back in 2017.

“Building codes, when they’re adopted, go through a pretty lengthy process of review,” Glantz said. “I think when that process of checks and balances is violated, which I believe was the case late last year, it begins to politicize building codes, which I think is wrong.”

He noted that his city, Creve Coeur, adopted the 2018 building codes without amendments despite his personal concerns. But, he said, it went through the proper review.

“While I disagree with aspects in the code, I accept the fact that it went through a process and was not hijacked like it was in St. Louis County,” Glantz said.

In a statement, HBA Executive Vice President Celeste Rueter said the association is focused on helping members comply with the new codes that took effect  Wednesday in St. Louis County.

“While we are always concerned about legislation which does not take into account the economic impact it will have on St. Louis County residents, the HBA and its members have moved on from the legislative process related to codes,” she said.

The HBA called Glantz, the only Democratic challenger in the District 2 primary, a “proven leader” and said Mantovani’s experience as a “job creator” and his “innovation and leadership” are demanded at a time when St. Louis County is at a “critical juncture.”

Mantovani said he doesn’t have any position on the December deal or beginning a review of the 2021 codes should he win. He does believe homebuyers should be able to “within some reason, decide what they want to pay for and what they don’t,” but he hopes to be able to find common ground between builders and environmental groups.

As for the size of the Home Builders’ donation to the PAC supporting him, he said his message about economic growth resonated with the group, because the strength of the homebuilding industry is largely a product of a region’s broader economy.

“Homebuilding starts in St. Louis County have been declining, population in St. Louis County has been declining,” Mantovani said in an interview. “One of the fundamental principles of my campaign is we have to create more economic growth in the region. And I think that message resonated with the Home Builders, who believe that a growing economic engine and a growing population base is crucial for their business prospects.”

Mantovani and Page aren’t the only Democrats running for county executive.

Asked about his position on energy efficiency in construction codes, St. Louis County Assessor Jake Zimmerman, who bills himself as “the only progressive Democrat” in the race, said “both of my opponents seem to be more interested in currying favor with special interests than doing the right thing when it comes to development in St. Louis County.”

“My approach to the building code will be the same as my approach to COVID relief: following the facts and the science, not marching to a tune called by donors and dark money,” Zimmerman said in a statement.

A fourth candidate, doctoral student Jamie Tolliver, said she is a member of the Sierra Club and backs its position on energy efficient building codes. 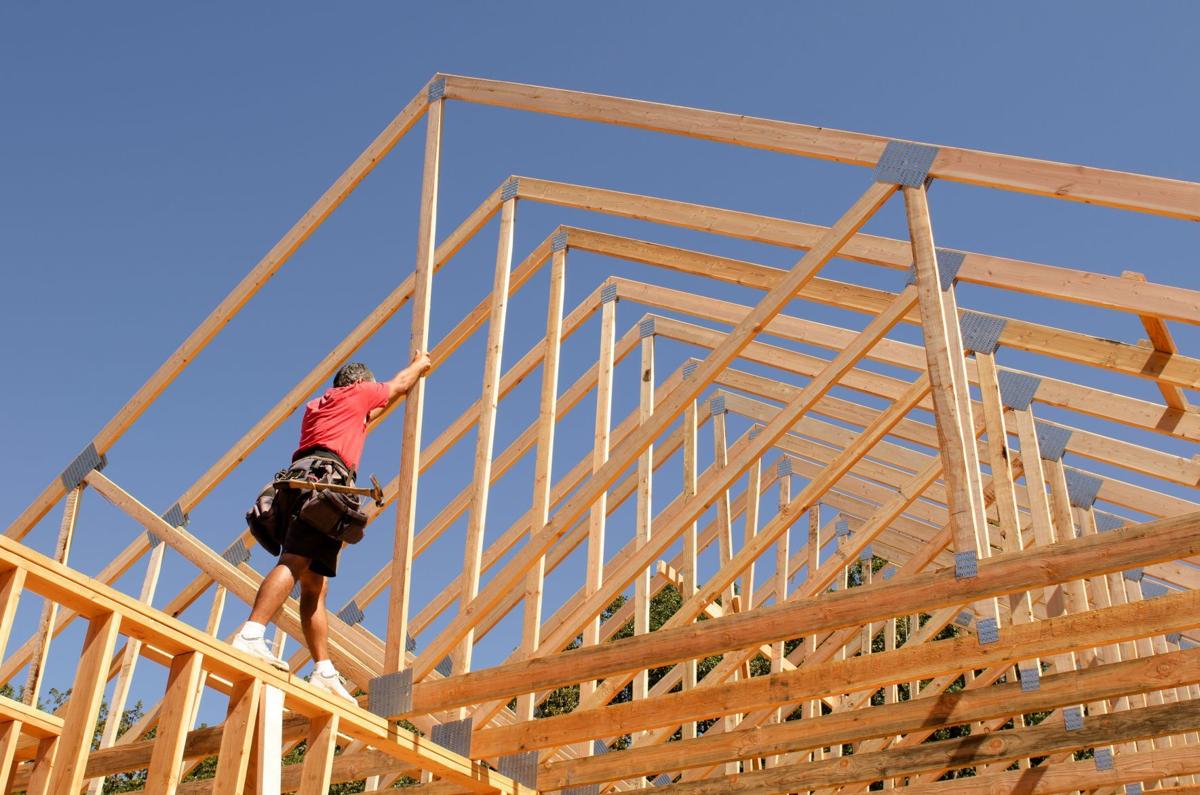 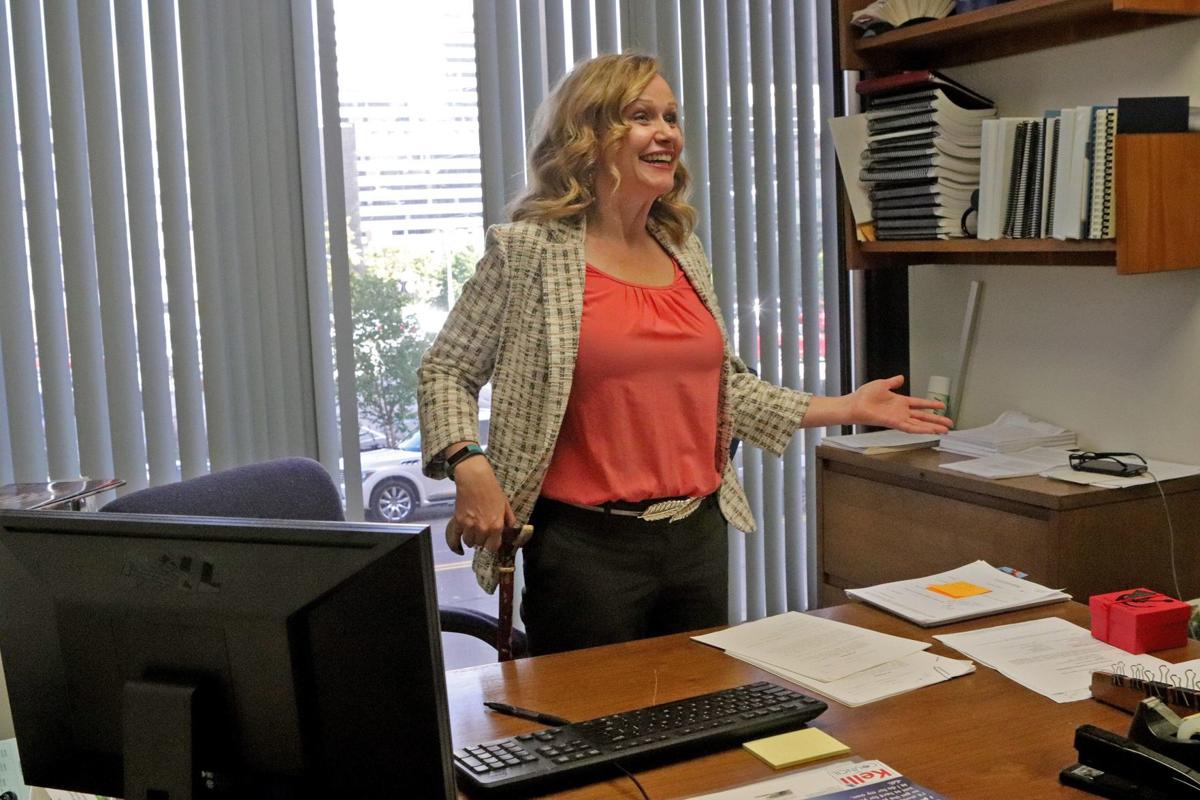 New St. Louis County Councilwoman Kelli Dunaway reacts to seeing her office for the first time, immediately after her swearing in, on Tuesday, Aug. 13, 2019. Photo by Hillary Levin, hlevin@post-dispatch.com. 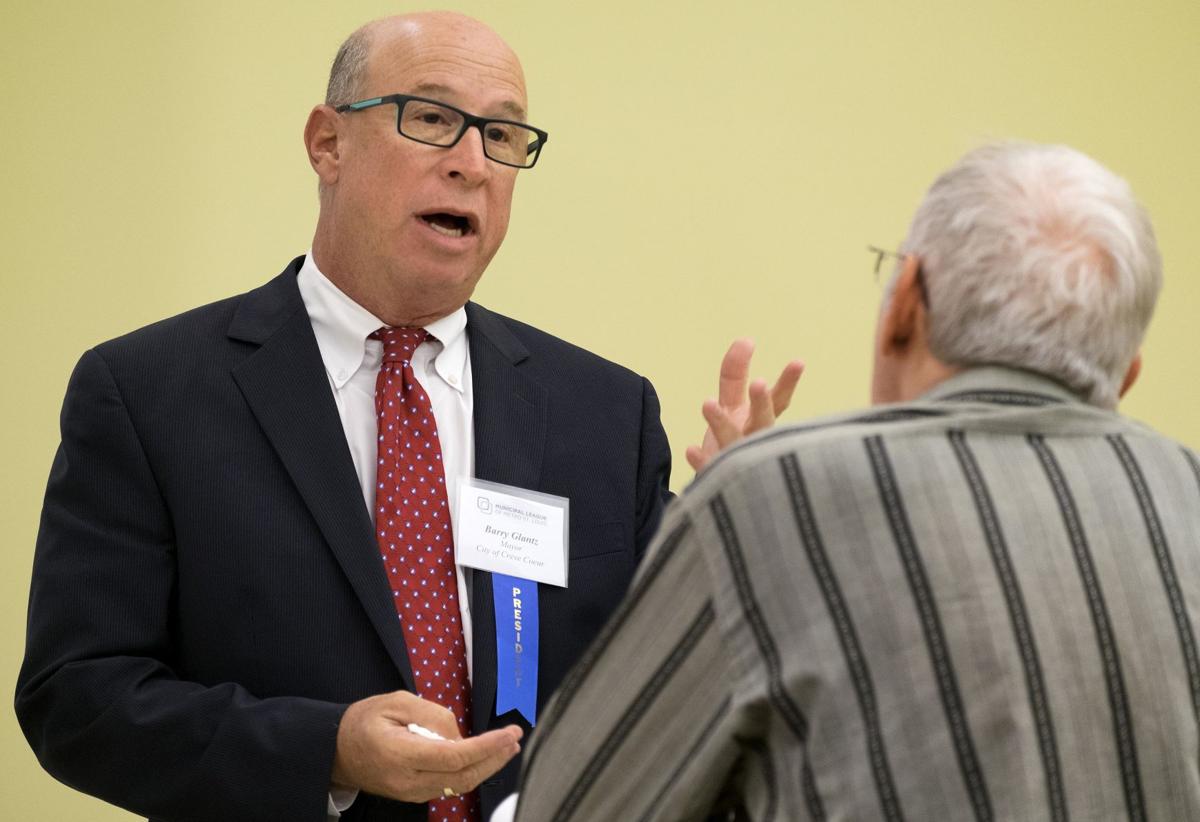 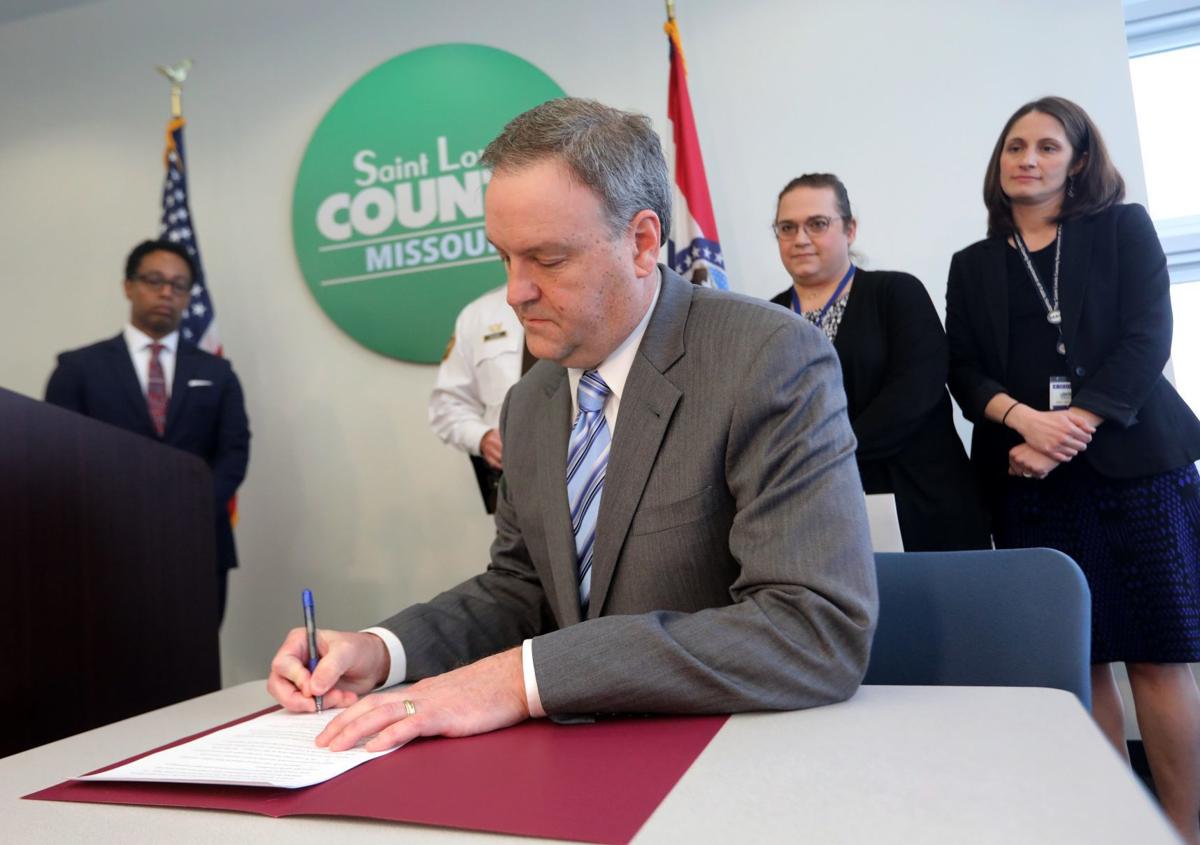 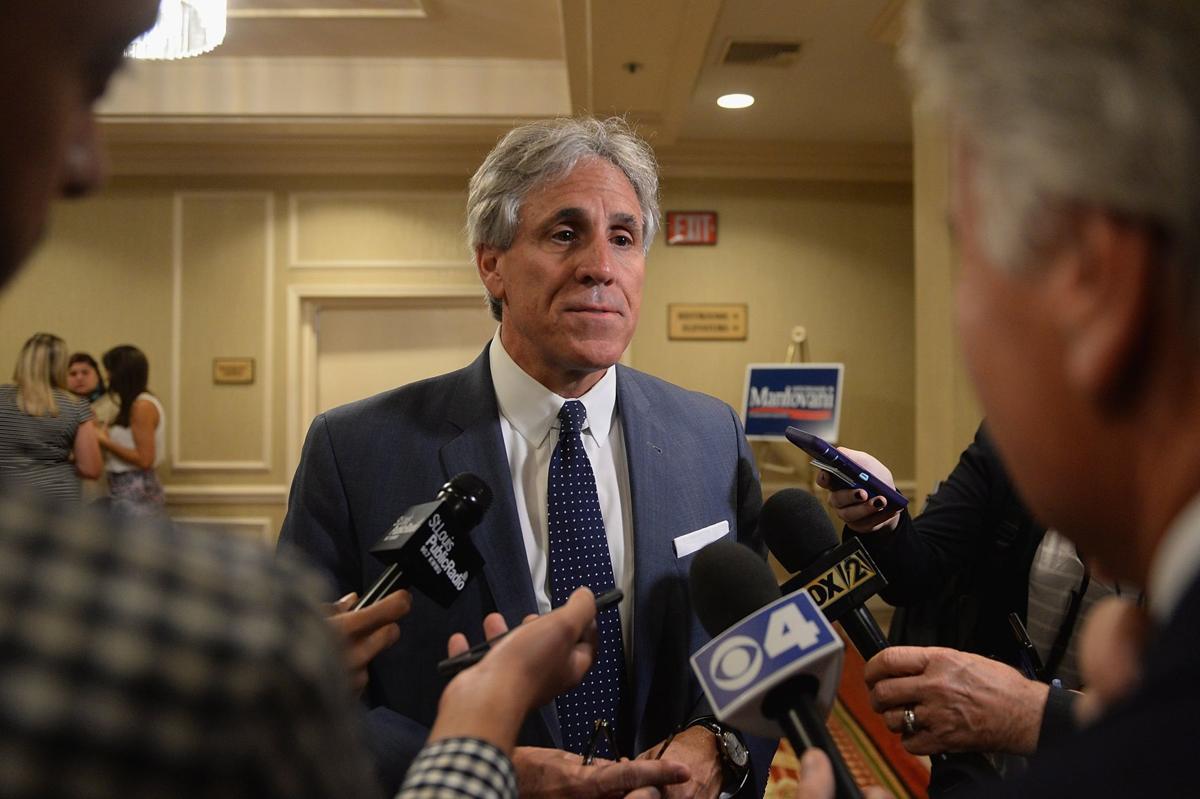 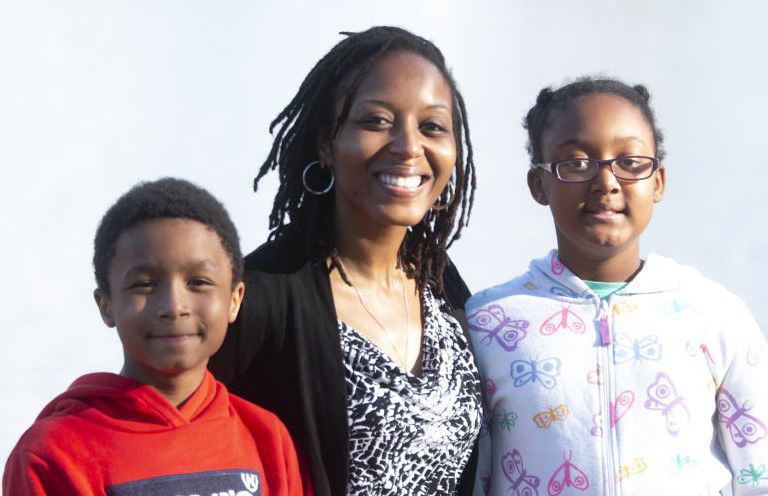 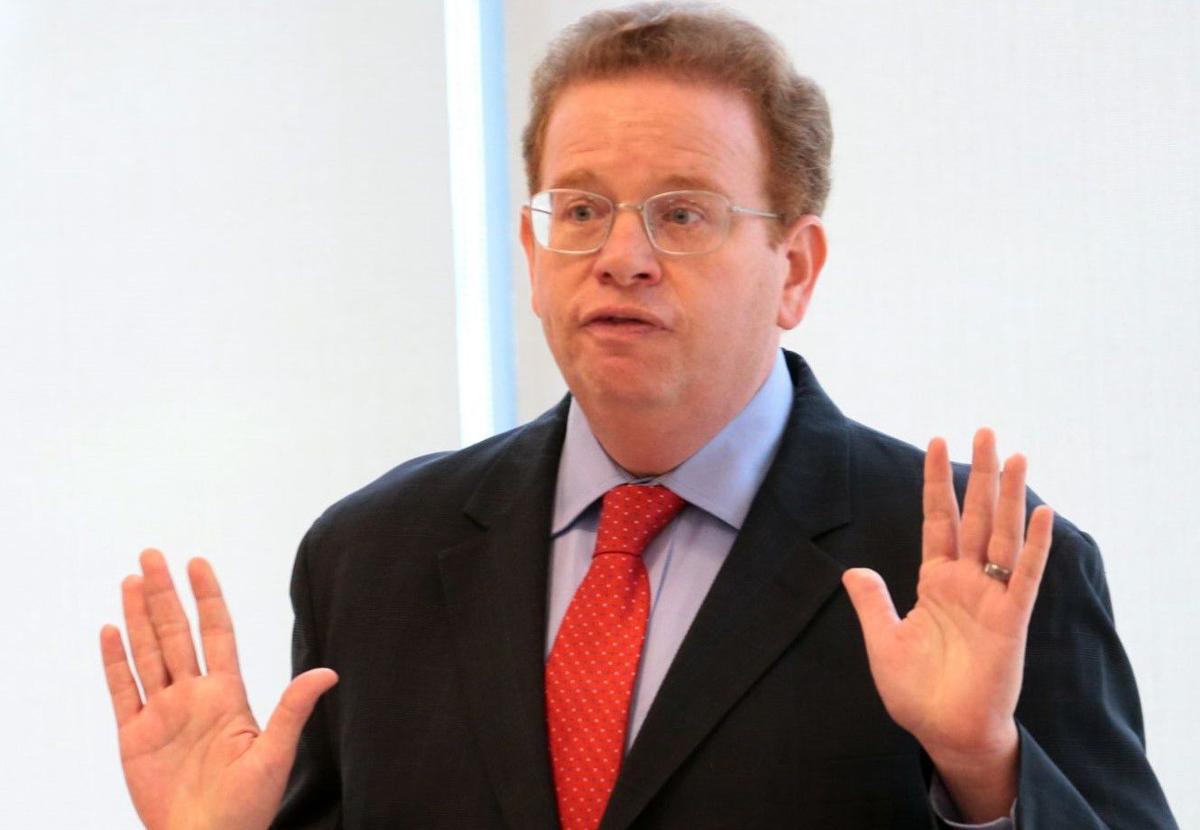