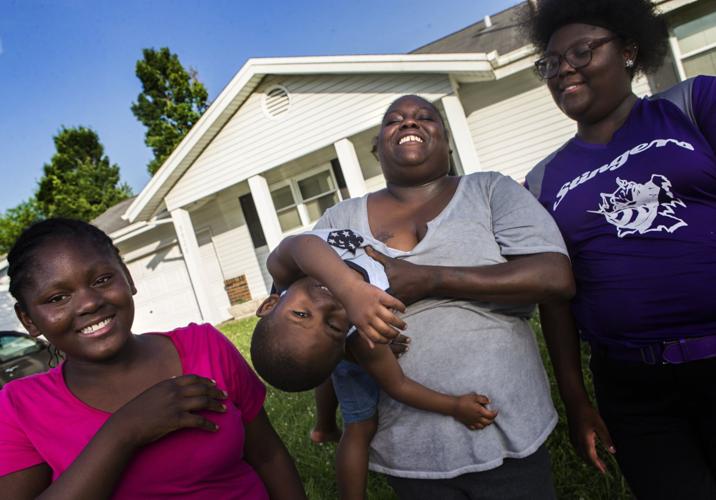 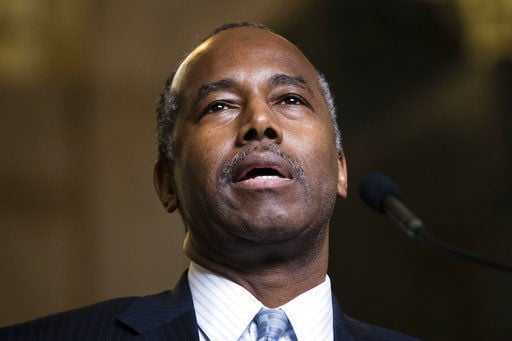 In this Sept. 19, 2017, file photo, Housing and Urban Development Secretary Ben Carson speaks during his visit to the Vaux Big Picture High School in Philadelphia. A group of advocacy organizations plans to sue Carson over his decision to delay an Obama-era rule intended to ensure that communities confront and address racial segregation. (AP Photo/Matt Rourke) 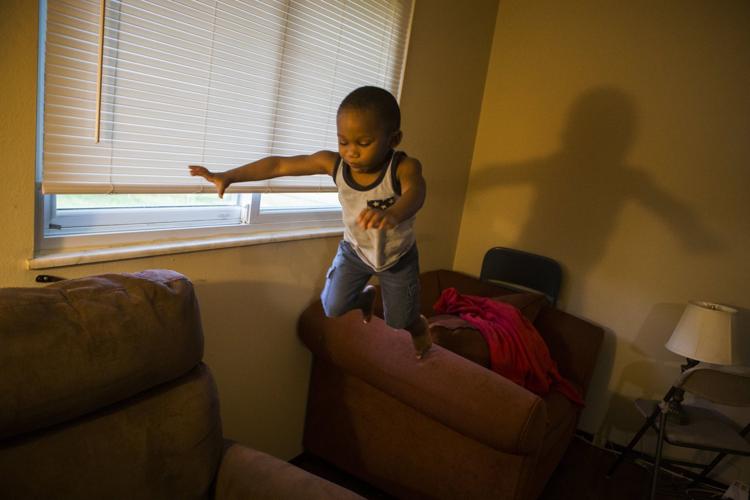 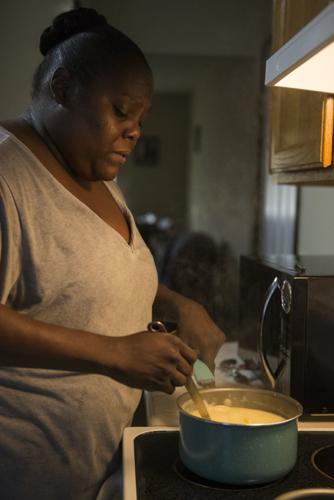 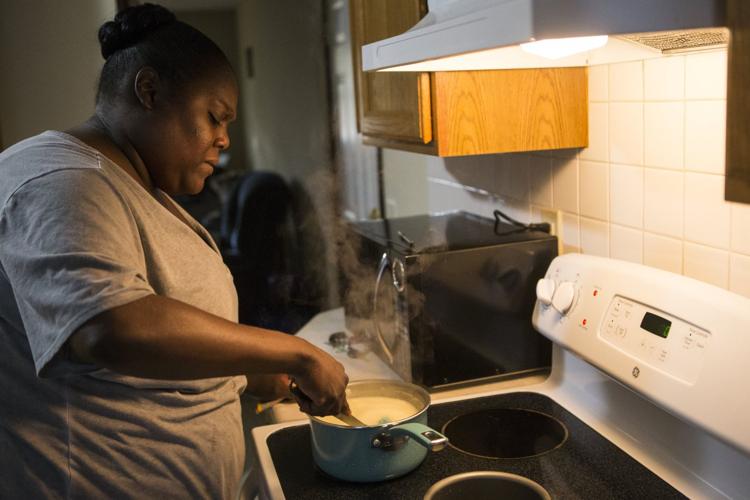 FLORISSANT • Nina Tramble isn’t ready to be forced out of a home in a neighborhood where she and her children feel safe.

But that could happen, she fears, if Housing Secretary Ben Carson has his way.

Carson has proposed to raise rents for more than 4 million low-income households across the United States in belief that pushing more people to find jobs would set them on a path toward self-sufficiency.

His “Make Affordable Housing Work Act,” announced April 25, would allow housing authorities to impose work requirements, would increase the percentage of income that tenants are required to pay from 30 percent to 35 percent, and would raise the minimum rent from $50 to $150. It would eliminate deductions, for medical care and child care, and for each child in a home: Currently, families can deduct $480 per child per year, significantly lowering rent.

But an analysis of the plan by the Center on Budget and Policy Priorities and provided exclusively to The Associated Press and its members shows that in the 100 largest U.S. metropolitan areas, low-income tenants — many of whom already have jobs — would have to pay roughly 20 percent more each year for rent under the plan. That’s about six times greater than the growth in average hourly earnings, putting poor workers at an increased risk of homelessness because wages haven’t kept pace with housing expenses.

In the St. Louis area, the analysis finds more than 86,000 people who rely on federal housing assistance would see their rent increase by 22 percent, or $780 a year on average. Nearly half of those affected are children, and almost a third are elderly or disabled.

Tramble, 36, a single mother of three, has a federal housing voucher through the St. Louis County Housing Authority that reduces her rent to $400 a month. She said she already works 10- or 11-hour days at times, and sometimes has to work weekends to make ends meet. She’s a program assistant for a physical, occupational and speech therapy rehabilitation services company.

Her rent, under Carson’s proposal, would rise by about $150 a month, or nearly 38 percent.

That kind of increase could mean moving out of Florissant, where she rents a tidy, three-bedroom home with a garage on a quiet residential street, and out of Hazelwood School District. Tramble said she and her three children, Terrah, 15, Journie, 9, and Legend, 3, moved out of the Ferguson area this year to get them into a better school district, and into a safer area in general.

After Michael Brown was fatally shot in 2014 by a Ferguson police officer, Tramble said she watched her neighborhood decline.

“After that incident, it caused a lot more chaos and more shootings,” Tramble said. “There were more police cars, and my fear really became a fear of a stray bullet hitting my kids. I just want them to be able to play and not fear that.”

Without the housing voucher, Tramble isn’t sure that the move to a better neighborhood would have been possible.

“It helped me fulfill that goal of a better school district for my children,” she said. “And have more peace, you know? We’re not going to sleep hearing sirens and hearing gunshots. In Florissant, we hear the coyotes.” In their new neighborhood, there’s a park within walking distance, and it’s quiet at night.

The housing voucher has also helped Tramble put healthier food on the table for her family, she said. Her oldest daughter has Type 2 diabetes, and she believes it’s because of her previous routine of buying “what was cheapest and what could stretch the furthest.”

“It’s going to hit hardest, in my opinion, for people with a lot of children,” said Oliphant, who helps people with vouchers find decent housing in high-opportunity neighborhoods. One person she works with has seven children, “so that would be a really big hit for her.”

For people living in crime-ridden neighborhoods who are already struggling to make ends meet, like she once was, Tramble can’t imagine that this proposal won’t affect them negatively.

“Where will they go from there if they can’t afford where they’re at now?”

Carson’s proposal, which needs congressional approval, is the latest attempt by President Donald Trump’s administration to scale back the social safety net, under the belief that being less generous will prompt those receiving federal assistance to enter the workforce. “It’s our attempt to give poor people a way out of poverty,” Carson said in a recent interview with Fox News.

The analysis shows families would be disproportionately impacted. Of the 8.3 million people affected nationally, more than 3 million are children.

The impact of the plan would be felt everywhere.

Rent for the poorest tenants in Baltimore, where Carson was a neurosurgeon at Johns Hopkins Hospital, and where his own story of overcoming poverty inspired generations of children, could go up by 19 percent or $800 a year. In Detroit, where Carson’s mother, a single parent, raised him by working two jobs, rents could increase by $710, or 21 percent. Households in Washington, D.C., one of the richest regions in the country, would see the largest increases: $980 per year on average, a 20 percent hike.

“This proposal to raise rents on low-income people doesn’t magically create well-paying jobs needed to lift people out of poverty,” said Diane Yentel, CEO of the National Low Income Housing Coalition. “Instead it just makes it harder for struggling families to get ahead by potentially cutting them off from the very stability that makes it possible for them to find and keep jobs.”

The policy center conducted its analysis based on 2016 HUD data. It includes tenants living in public housing and receiving Section 8 and project-based vouchers. It excludes housing authorities participating in the Moving to Work program, which allows districts to determine their own distinct rent policies.

Hillsdale landlord accused of taking off the doors, cutting the waterline to evict tenant

Police chief says there is an open investigation regarding the removal of the doors and electric meter.

Creve Coeur officials hope to save the city's 50-year-old ice rink that is in need of repairs.

Lack of city funds in Hazelwood means no fall leaf pickup and no Fourth of July fireworks this year.

Renegade priest at St. Stanislaus is going back to Poland

In this Sept. 19, 2017, file photo, Housing and Urban Development Secretary Ben Carson speaks during his visit to the Vaux Big Picture High School in Philadelphia. A group of advocacy organizations plans to sue Carson over his decision to delay an Obama-era rule intended to ensure that communities confront and address racial segregation. (AP Photo/Matt Rourke)