Another do-over election in St. Louis is ordered, again over improperly cast absentee ballots
0 comments
Share this
{{featured_button_text}}
1 of 3 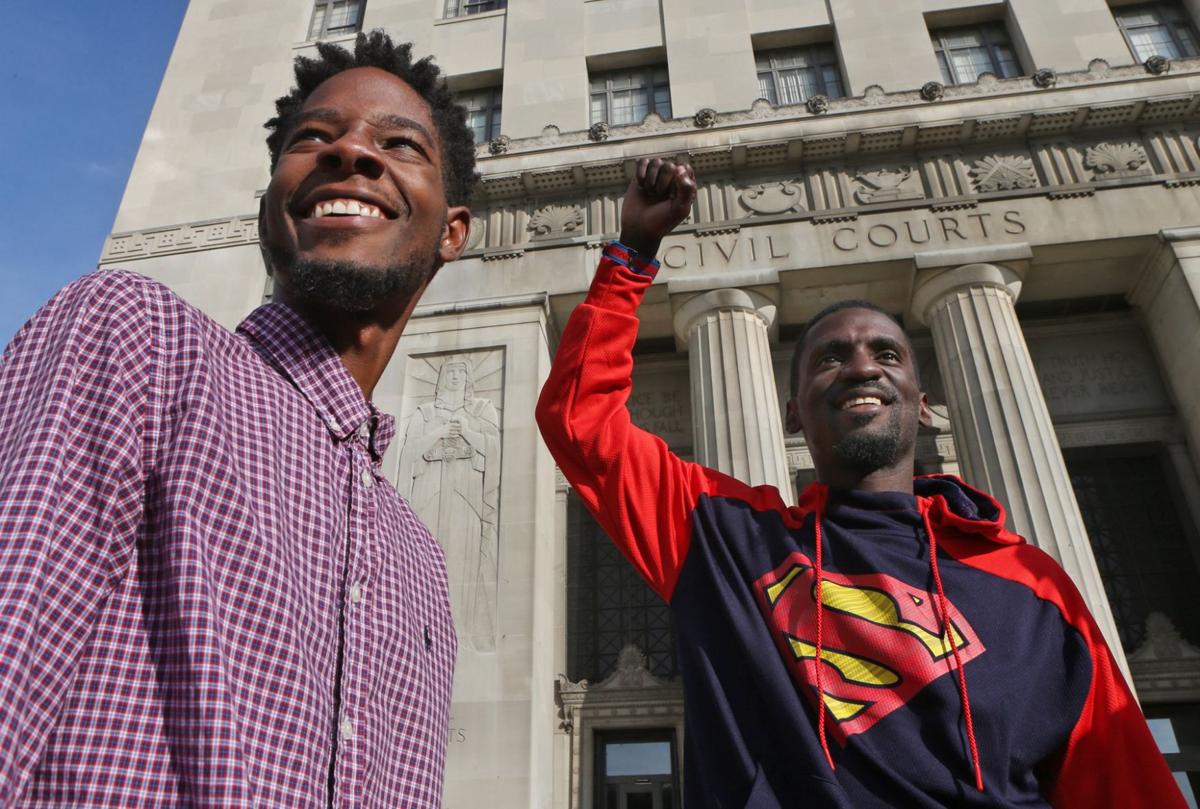 Rasheen Aldridge, 22, (left) and Bruce Franks Jr., 32, acknowledge a friend driving by the Civil Courts building on Tuesday, Oct. 11, 2016, while they wait for a ruling by Judge Julian Bush, who eventually ruled that a new election should be held. Photo by J.B. Forbes, jforbes@post-dispatch.com 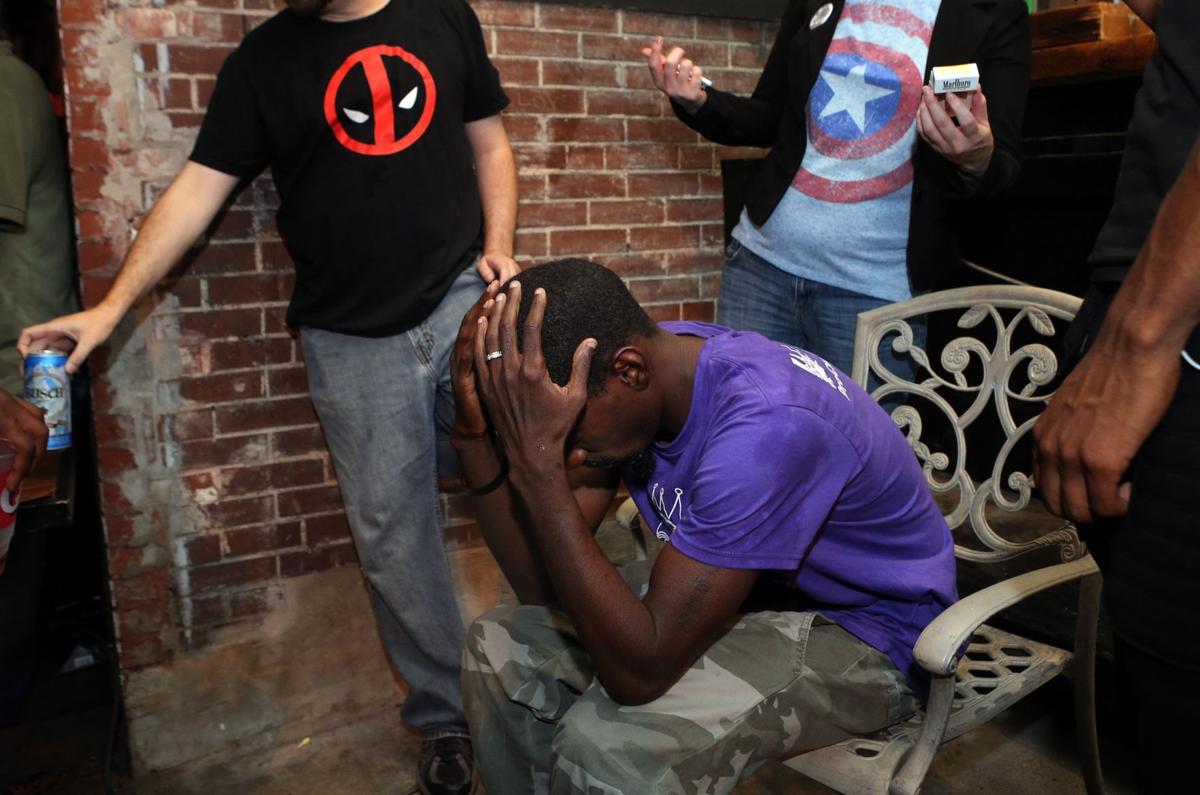 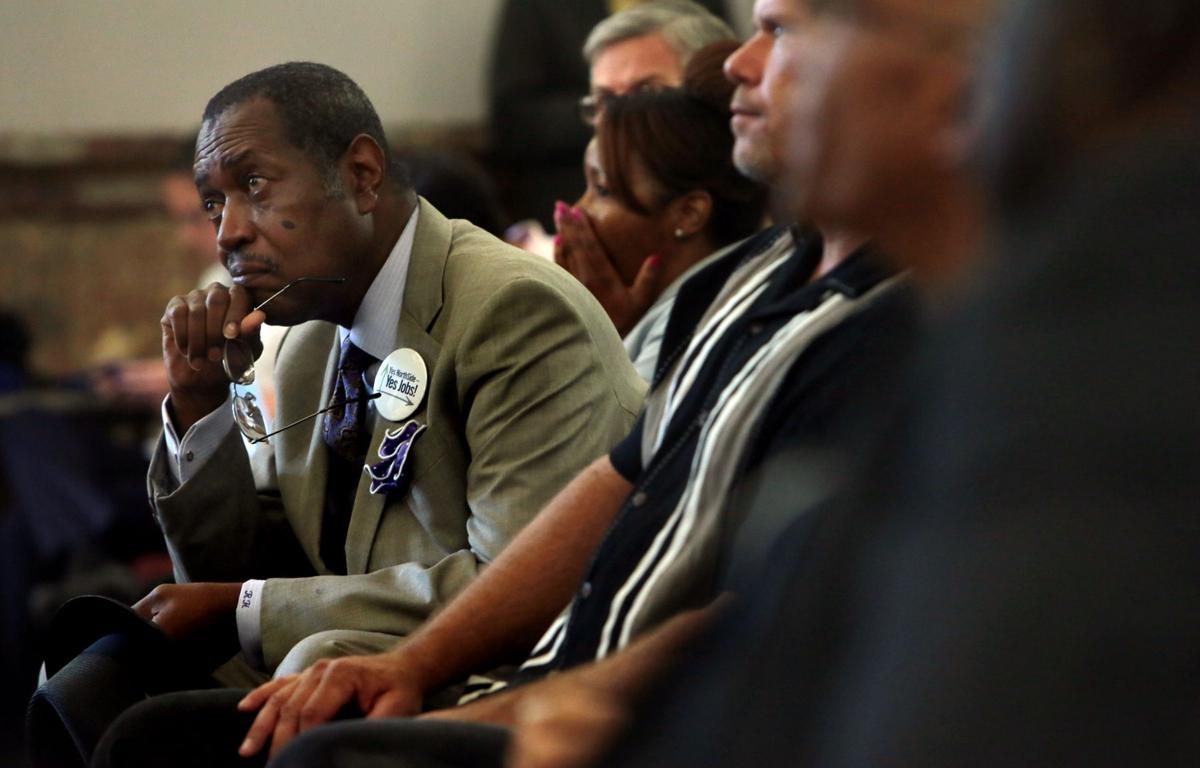 ST. LOUIS • Another do-over election has been ordered in the city. And again it involves a race with a member of the Hubbard family.

Circuit Judge Julian L. Bush on Tuesday agreed that some absentee ballots were cast improperly and should not have been counted in the race for Fifth Ward Democratic Committeeman on Aug. 2.

As a result, incumbent Rodney Hubbard Sr. again will face challenger Rasheen Aldridge in a special election held Nov. 8, the same day as the general election.

Voters in the Fifth Ward will be notified by mail that when they show up at the polls in four weeks, they will have two ballots to cast.

“The court is firmly convinced that there were irregularities of sufficient magnitude to cast doubt on the validity of the Aug. 2, 2016, election for Fifth Ward Democratic Committeeman,” Bush wrote in his decision following a short trial Tuesday afternoon.

It was a familiar outcome. In another race on Aug. 2, Hubbard’s wife, Penny Hubbard, defeated Bruce Franks Jr., for the 78th District state representative race. Franks got the most votes Election Day, but 78.5 percent of the absentee ballots were cast for Penny Hubbard, giving her the nod.

Franks sued for a do-over in that Democratic primary race, and on Sept. 2, a judge ruled in his favor, saying 142 absentee ballots cast in person at the Election Board office should not have been counted because they were not put into sealed envelopes, as is required by state law. An appellate court upheld the ruling by Circuit Judge Rex Burlison.

On Sept. 16, Franks won by a 3-to-1 ratio in the second election. He faces Republican Erik Shelquist in November in a district dominated by Democrats. The Fifth Ward sits largely in the 78th District.

The attorney for Franks, Dave Roland, also represented Aldridge on Tuesday. As in Franks’ case, Roland identified those who voted absentee in person, listing in his lawsuit 71 people who did so. He also identified 42 other absentee ballots he said should have been voided because the envelopes they were returned in did not contain necessary information such as a signature, address or notarization.

Aldridge, 22, received more votes on Election Day, but Rodney Hubbard captured 70.6 percent of the 327 absentee ballots cast, giving him the victory for the party seat. Committeemen typically direct party activities, though they hold no public authority.

Hubbard, 67, could not be reached for comment. He was represented in court by Jane Dueker, who also represented Penny Hubbard. Dueker did not immediately return a phone call to say whether she would appeal the decision.

Roland told Bush the Aldridge case involved the “exact same facts” as those Roland presented in his fight to get Franks a new election.

Bush was the judge in August who ruled that absentee ballots and their envelopes are public record; Roland had sued to get access to the records in his effort to get the do-over election in the Franks case.

The Post-Dispatch also asked for the records, which led to a newspaper investigation revealing multiple problems with absentee voting.

Dueker, as she did in the Franks case, questioned the constitutionality of throwing out the results of one election and ordering a new one.

Aldridge, 22, grew up in the Fifth Ward and is familiar with running for office in that part of town, which includes the Carr Square neighborhood just north of downtown.

Aldridge is a former Ferguson Commission member. Like Franks, he was a frequent figure at protests after the fatal shooting of Michael Brown. Aldridge and Franks, 32, are part of an effort by young, left-leaning Democrats to topple established party leaders, including Hubbard family members.

While Penny Hubbard lost her re-election bid for the state House seat, she retained her position as Democratic committeewoman for the Fifth Ward in an election also held Aug. 2. The results in that race will not be challenged because of Hubbard’s strong performance in votes cast on Election Day and in absentee ballots, Roland said.

“I’m excited, I’m excited,” Aldridge said. “This is something the people of the Fifth Ward really deserve. People want a fair election contest.”

Franks sat in on the Tuesday afternoon bench trial, and posted the results on Facebook immediately after Bush ruled.

A morning in DePaul Hospital’s intensive care unit as doctors and nurses scramble to save lives.

Bars and restaurants in St. Charles County must close at 11 p.m. for the foreseeable future.

Noses across the region are running, and residents are hoping their symptoms aren't the signs of something more ominous.

The Jefferson County mandate begins Friday and lasts through Dec. 27.

Bars and restaurants in St. Charles County must close at 11 p.m. for the foreseeable future.

A gift long ago by Congregation Temple Israel was reciprocated with a donation that has allowed the temple to feed hundreds each year on the holiday.

Missouri reported that there were 2,805 hospitalized COVID-19 patients statewide — double the number from six weeks ago.

The Jefferson County mandate begins Friday and lasts through Dec. 27.

The St. Louis Metropolitan Pandemic Task Force hospital ICUs are at 88% of capacity.

Rasheen Aldridge, 22, (left) and Bruce Franks Jr., 32, acknowledge a friend driving by the Civil Courts building on Tuesday, Oct. 11, 2016, while they wait for a ruling by Judge Julian Bush, who eventually ruled that a new election should be held. Photo by J.B. Forbes, jforbes@post-dispatch.com