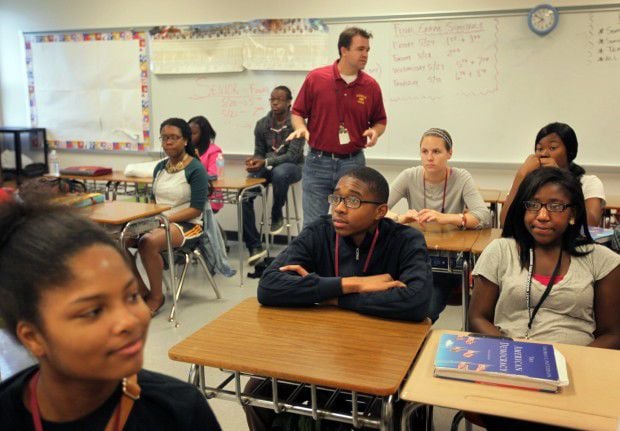 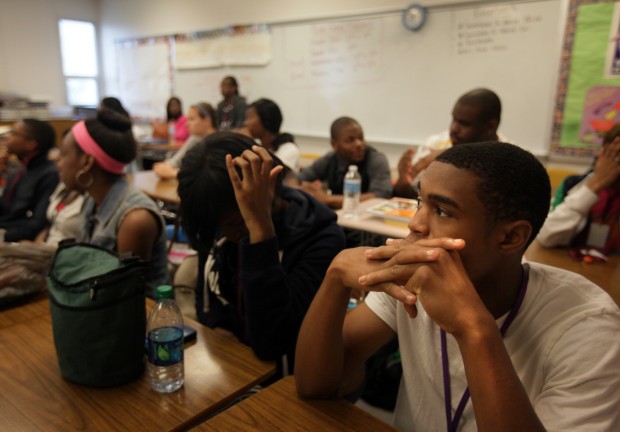 Add up the credits for Advanced Placement and other college-level courses that Jaime Staengel took in high school, and the Rockwood Summit senior has quite a head start.

She’ll probably begin her freshman year of college with as many credits as some sophomores.

The academic and financial benefits made the challenging classes worth it to Staengel, who says she’s happy to save herself time in college by moving into more advanced classes sooner for a major in German. And she says her parents think it’s great, too.

“It’s saving them money in the long run,” said Staengel, who is headed to Murray State University in Kentucky.

Thousands of students across the state took Advanced Placement exams this month. Proponents of the College Board-created program hope underclassmen see success like that of Staengel and sign up. But despite efforts by Missouri’s education department and area districts to increase enrollment in the courses, the state’s public school students still rank among the bottom in the nation for both participation and pass rates, even though both are up in recent years.

At the same time, area universities say the number of high school students taking what’s known as dual credit courses is growing rapidly — and argue that those classes may offer more benefits than AP for some students.

The two approaches — dual credit and AP — offer competing schools of thought on helping high school students earn college credits. AP prepares students to pass an exam to prove their mastery of college-level curriculum. Dual credit in effect enrolls students in college courses while they are still in high school, allowing them to earn credit for both.

Caught in the middle are students and parents who wonder which approach produces the best payoff.

Experts say both approaches can work. When done the right way, they say, many students are able to lop off an entire year or more of college before they even get there.

But there are pitfalls to both. And that can leave students who thought they did the work without the credits that count.

Students in AP classes, for example, may find that although they passed an exam, their score isn’t high enough. At some elite colleges, even the highest mark doesn’t count. And while dual credit offers students a transcript proving they completed a course, it may be a transcript some colleges do not accept.

Students and parents who want to shop for the best approach may find their options are limited based simply on the school they attend.

In Missouri, a push — at least at the state level — is building behind AP, after years of popularity for dual enrollment. For the first time this summer, the percentage of students passing an AP exam will factor into a district’s report card from the state. Although dual credit courses also are considered, AP earns a district extra points.

Missouri officials regard AP courses as a mark of a school’s quality, demonstrating that it is offering students challenging options to prepare them for college.

“There is a level of rigor that’s established,” said Margie Vandeven, a deputy commissioner for the Department of Elementary and Secondary Education.

Meanwhile, those national rankings that schools love to boast about — by publications such as Newsweek and U.S. News & World Report — use AP courses as a measure of excellence.

As education experts debate the quality of college credit courses, the issue for parents and students increasingly is controlling college costs.

“This is a huge asset to making college affordable,” said Gayle Rogan, director of the 1818 Advanced College Credit program at St. Louis University.

The SLU program offers a dual credit approach. High schools that participate must have teachers who have been vetted and approved by SLU, which also oversees the curriculum.

Students, in turn, enroll at a fraction of the cost they would pay as a traditional college student. A similar program by the University of Missouri-St. Louis, for example, costs just $60 per credit hour while enrolled in high school, compared with the $258 rate charged to college students.

Enrollment in dual credit courses in Missouri has outnumbered AP exams for years and has grown at twice the rate since 1999.

Kathleen Burns, director of the Advanced Credit Program at the UMSL, says the program has seen an 18 percent increase in the last four years. Likewise, 5,000 students took at least one dual credit class through SLU’s program this year, up from 3,000 in 2000.

Students who pass the course have a college transcript with credits that, at a minimum, the school that sponsored the course will honor. Those credits also could be eligible for transfer to another college or university.

Of course, transferring those credits can be tricky. Many schools won’t accept them.

Vandeven, of the Missouri education department, also points out that the quality of dual credit courses can be difficult to measure. AP courses, in contrast, can be judged on a more consistent standard — the national exam.

But a passing score of 3 out of 5 may not be good enough for credit at all colleges; many require a minimum score of 4. The University of Missouri-Columbia, for example, requires a 4 on more than half of AP exams. Some colleges also have limits on the number of credits they’ll accept.

Buesse, the Fort Zumwalt North counselor who is also a past president of the Missouri Association for College Admission Counseling, urges students to consider a host of factors, such as their intended major and where they anticipate going to college.

Every institution, she said, has its own policy on AP tests and dual credit transfers. Dartmouth, for example, announced this year that it won’t award credits at all for AP exams.

Still, admissions officers like to see AP courses on an applicant’s transcript, as a sign that the student can handle challenging courses.

Advocates say offering college-level courses of any kind in high school pays off, even if not every credit is honored. They argue that schools raise the bar for students and teachers by offering more rigorous courses.

Some, however, warn that pushing students into the courses can backfire. For example, more than half of the AP teachers surveyed a few years ago by the Thomas B. Fordham Institute said that too many students were in over their heads.

The study also said many parents were overeager to have their child in AP courses. It also found that 75 percent of teachers believe high schools are expanding their AP programs mainly to improve the schools’ rankings and reputations.

Despite those criticisms, states and the federal government continue to push for more course offerings and higher enrollments.

In 2011, the U.S. Department of Education gave St. Louis Public Schools a grant of more than $1.7 million to encourage participation in AP courses. Since then, the district has added classes and boosted enrollment.

In Hazelwood, increasing enrollment in AP, as well as dual credit, has been a goal of Assistant Superintendent Darrell Strong for the past two years. That includes boosting the enrollment of minorities, who make up a small percentage of AP participants in Missouri.

Recruiting for AP classes in the district starts in middle school. This year, eighth-graders have peered into high school AP classes through Skype.

At the same time, Hazelwood has added honors classes to help better prepare students for AP. The district has also offered more training for teachers. The efforts increased enrollment in AP classes by 38 percent this year at the district’s three high schools, including Hazelwood Central, where the number of AP students went to 288 from 190.

Larry Wilbon, a junior at Hazelwood East who took an AP Government class this year, said some students thought the classes were intimidating.

“It’s not a joke, but you can handle it,” he said. “It’s a lot of personal responsibility.”

First day of school in St. Louis, through the years

FOUL: Nothing advanced about this placement for Missouri

FOUL: Consistency in education is usually a good thing. Repetition has its rewards.