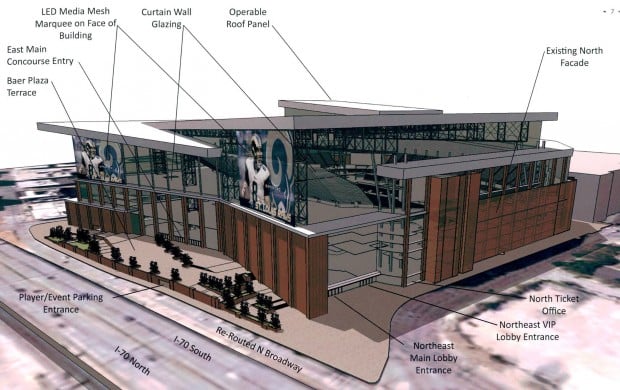 If the CVC would have agreed to this $700 million proposal, it could have saved $2 million in legal fees. 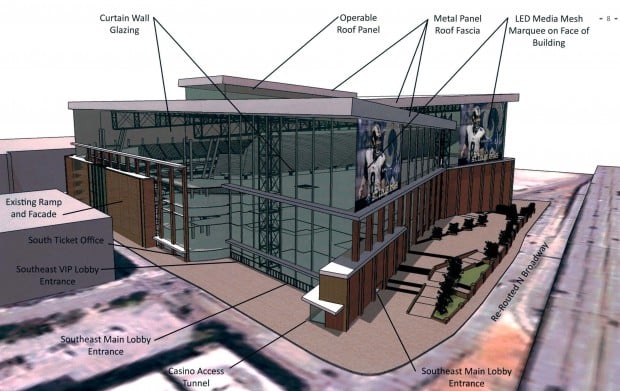 The St. Louis Rams' proposal for the upgrade to the Edward Jones Dome was released Monday, May 14, 2012, by attorney general Chris Koster. The plans include a significant expansion and the addition of an "operable roof panel." Artist rendering by HKS Sports and Entertainment 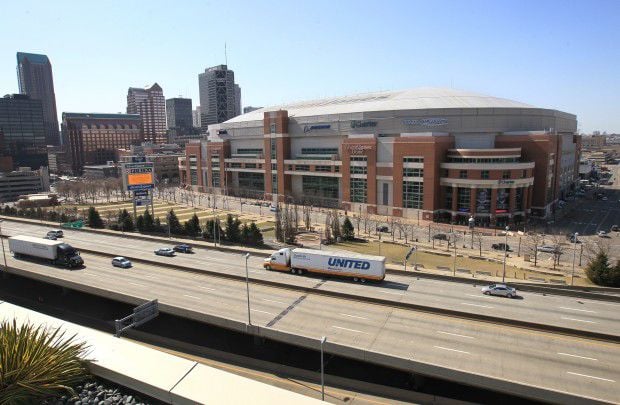 The Dome at America's Center, formerly the Edward Jones Dome as seen from the elevated deck of the Four Seasons Hotel on Thursday, March, 1, 2012. Photo By David Carson, dcarson@post-dispatch.com

ST. LOUIS • The Rams have won a clear victory in the negotiations over the Edward Jones Dome.

A panel of three arbitrators sided with the team today, saying the Rams' plan for a dramatic renovation of the Dome -- estimated to cost at least $700 million -- is the only way to make the building a "first tier" football facility.

The Convention and Visitors Commission, which runs the Dome, now has 30 days to decide if it will try to enact the Rams' plan. But one of its lead attorneys, Greg Smith, said this afternoon that is "unlikely."

If the CVC indeed rejects the plan, the Rams' lease at the Dome will go on a year-to-year basis starting in March 2015.

The talks between local leaders and the Rams are now expected to shift away from the Dome -- and towards the idea of building a new stadium, on a new site.

Jeff Rainford, chief of staff for St. Louis Mayor Francis Slay, said today's decision is only one step "in the journey through the whole process."

"We now have clarity," Rainford said. "The Rams will hopefully let everyone know what they really want, and we'll see what we can do to help."

They were brought in to decide whether the CVC's proposal, or that of the Rams, would propel the Dome into "first tier" status, or top 25 percent of NFL stadiums, in several different categories. The Rams' lease at the Dome mandates that the building be a "first tier" facility by 2015.

The CVC had proposed a $124 million plan, with the team picking up about half the tab. The proposal called for, among other features, a new glass addition, outdoor terraces, a new center-hung scoreboard, new club seats, renovated suites and new lounges.

The Rams countered with a much more expansive renovation that city leaders estimated would cost at least $700 million. The Rams' plan called for tearing down half the Dome, extending its footprint across Broadway and adding a large glass wall, similar to Lucas Oil Stadium in Indianapolis. It also called for a playing-field-sized sliding roof, reconfigured seating, two end-zone “party platforms” and new, larger entrances.

The Rams released a statement tonight saying they were "pleased" with the arbitrators' decision and that it showed "significant improvements are required to put the Edward Jones Dome on equal standing with most National Football League stadiums and to enhance the fan experience."

Smith said the arbitrators found the Dome to be lacking in several areas, including a small footprint, narrow aisles, poor light, and an upper-level overhang that would prevent good views for a modern center-hung scoreboard.

"It would be premature to comment on what the next steps are," Smith said. "We obviously have to have time to hold conversations among community leaders."

But the focus had already started to shift to the possibility of a new stadium, with three potential sites: a large swath of farmland in Maryland Heights, stretching south from Interstate 70 and down by the new Highway 141 extension; the former Chrysler plant site in Fenton; and the Bottle District downtown, in the shadow of the Dome.

Talk of a new stadium, of course, would include a debate about the mix of public and private money that would be needed.

Rams owner Stan Kroenke has been mostly silent during the negotiations. But in comments made before the arbitrators' decision was released, NFL commissioner Roger Goodell expressed optimism that the stadium situation would be resolved.

“I believe Stan Kroenke wants that outcome," Goodell said. "They’re all working together to try and get there. Again, the process is unfolding and I hope they’ll be able to reach that agreement. I’m optimistic they will.”

Goodell made his remarks Friday during his annual Super Bowl press conference.

He said the league is willing to do its part financially to help provide funding for a renovated or new stadium, under the right circumstances.

“If we can get to the point where we have the structure of a deal, I’m very confident that the league will support that and participate,” Goodell said.

Rainford stressed that Slay and County Executive Charlie Dooley have pledged to put any proposed tax increase for a renovated or new stadium up for a vote.

"The people of St. Louis will be the ones who decide," Rainford said.

Investment banking firm will work to keep the Rams in the Dome, or, if that’s not possible, to maintain a NFL team in St. Louis.

A new stadium for the St. Louis Rams?

As Edward Jones Dome arbitration begins, some are already looking to other sites.

Rams seek a stadium among the best in NFL. Commission hopes for deal to keep the Rams in St. Louis.

If the CVC would have agreed to this $700 million proposal, it could have saved $2 million in legal fees.

The St. Louis Rams' proposal for the upgrade to the Edward Jones Dome was released Monday, May 14, 2012, by attorney general Chris Koster. The plans include a significant expansion and the addition of an "operable roof panel." Artist rendering by HKS Sports and Entertainment

The Dome at America's Center, formerly the Edward Jones Dome as seen from the elevated deck of the Four Seasons Hotel on Thursday, March, 1, 2012. Photo By David Carson, dcarson@post-dispatch.com