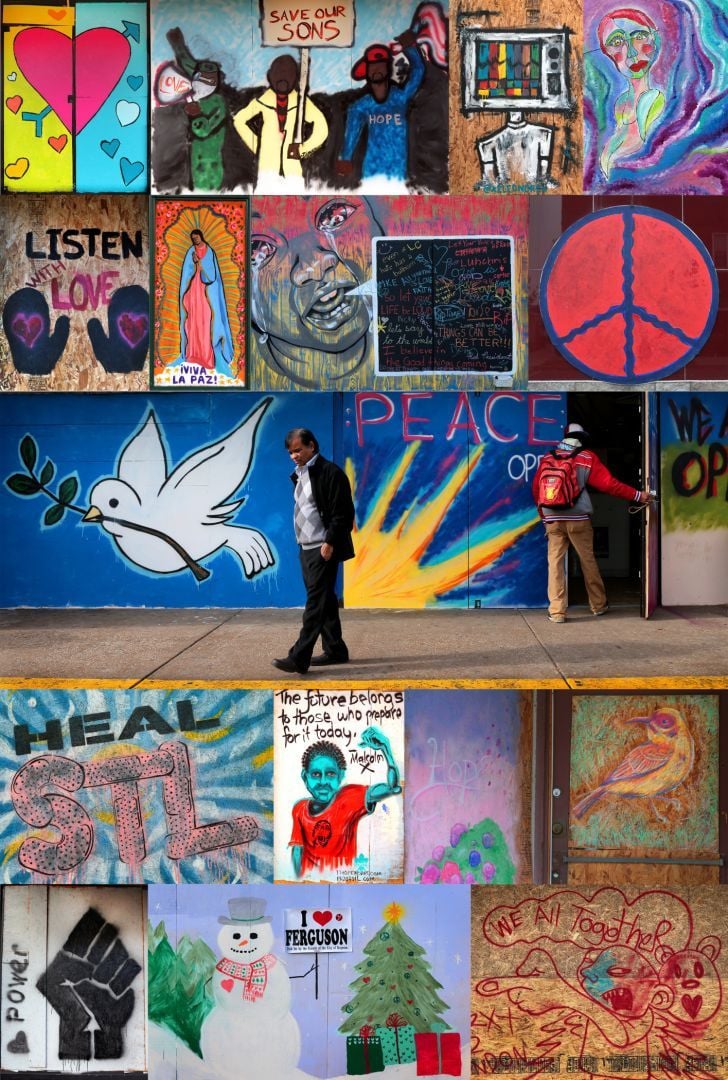 Artists, families, protesters, children - have been equally drawn to the plywood that covers windows and protect businesses in Ferguson and Tower Grove neighborhoods. The artwork is transient. Much of it is already gone on South Grand Boulevard since these photographs were taken on Tuesday and Wednesday, Dec 2-3, 2014. Photo by Robert Cohen, rcohen@post-dispatch.com 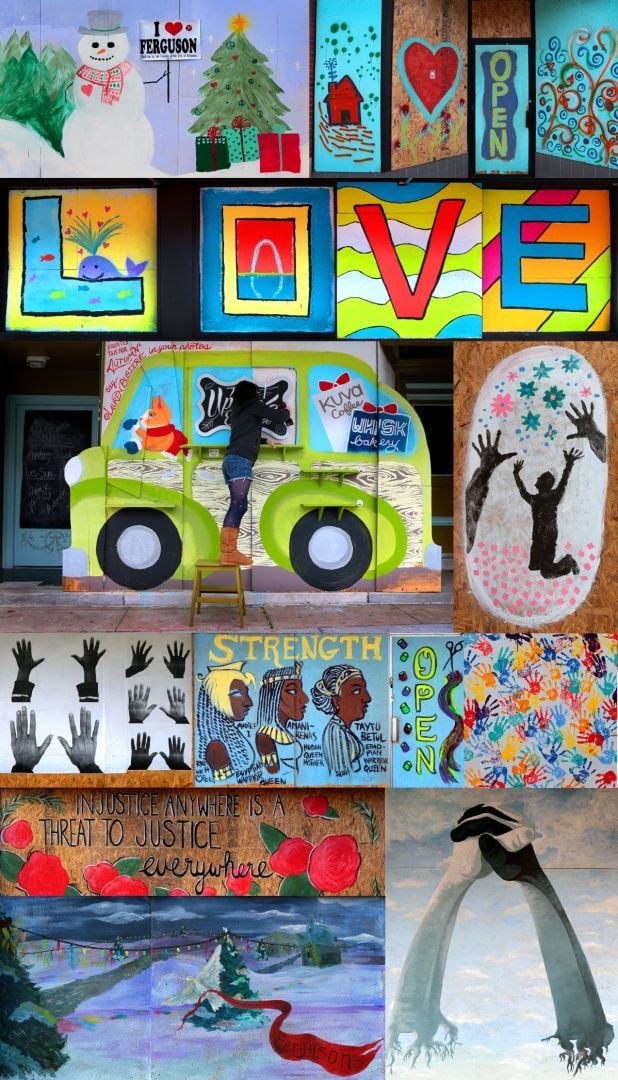 Artists, families, protesters, children - equally drawn to the plywood that covers windows and protects businesses in Ferguson and Tower Grove South neighborhoods. The artwork is transient. Much of it is already gone on South Grand Boulevard since these photographs were taken on Tuesday and Wednesday, Dec 2-3, 2014. Photo by Robert Cohen, rcohen@post-dispatch.com

First, plywood went up to protect storefronts or cover damage from rioting in Ferguson and on South Grand Boulevard in St. Louis. § Then, artists came out to decorate the wood with hopeful sayings, such as “listen with love” and “heal the world.” § Now, plans are in the works to preserve some of the artwork at the Missouri History Museum and the Regional Art Commission. § The History Museum wants to collect some of the art for research and possibly for an exhibit, said Chris Gordon, director of library and collections. § Plans are still in the early stages, he said, and preservation could be difficult — the plywood is large and will deteriorate over time due to the chemicals in the treated wood.

About 100 board-covered businesses have been decorated, said Tom Halaska, owner of the Art Bar on Cherokee Street and an organizer with Paint for Peace STL. He said the support from business owners and the public has been tremendous.

WATCH A VIDEO OF THE ART

Hundreds of artists came together to show the strength of the community and to move past images of burning businesses, he said.

They’re planning to paint more plywood this weekend and expand to other buildings in the future.

But not everyone is behind the preservation effort.

“It’s not the history you’d want to remember,” said Varun Madaksira, owner of the Original Red’s BBQ in Ferguson.

His restaurant was set on fire after the grand jury announcement that Ferguson police Officer Darren Wilson would not face state criminal charges in the killing of Michael Brown. The restaurant remains closed and boarded up, although Madaksira plans to cook and sell food on the lot this weekend and next.

And some protesters see the cheery colors and words as disguising grief and not paying homage to Brown.

“It’s an attempt to whitewash the pain the community has suffered,” said Tony Rice of Ferguson, who has been protesting since Brown was fatally shot Aug. 9.

He wishes the plywood would stay blank and especially wants people from out of town to see the sadness that remains about Brown’s death.

Cafe Natasha’s became the first South Grand business to get new windows to replace those shattered after the Nov. 24 grand jury announcement of no indictment against Wilson.

But owner Hamish Bahrami said she’ll keep the plywood in place for a while, just to be cautious.

Bright pink paint on the plywood-covered door of Cafe Natasha’s early last week was a backdrop to a little sign saying the restaurant is open and to “come light up our day.”

Rioters hurled 11 rocks and a trash-can lid through nine windows.

Bahrami, who came to the United States from Iran in 1976, vowed the destruction wouldn’t close the restaurant she opened 14 years ago at the corner of Grand and Wyoming Street.

“I understand their anger, but we are surviving too,” Bahrami said. “We’re working so hard to make a living, and we don’t deserve the damage. It’s not right to place that anger on us.”

She is overwhelmed at the outpouring of support from the neighborhood.

“I love St. Louis. I’m crazy about St. Louis.” The support “made me love it more,” she said. “The togetherness is wonderful.”

At the nearby Upcycle Exchange, owner Autumn Wiggins turned her shattered storefront into a place to sell cookies and coffee last weekend. The plywood covering the gap was painted like a food truck.

But now, she’s back to focusing on her business, a craft and art supply shop she opened three years ago at 3206 South Grand Boulevard.

“I want to get back to normalcy,” she said. She’s not sure when glass will be replaced but said friends had raised enough money to cover the cost.

Boarded-up buildings give the false impression that an area is unsafe, said Rachel Witt, executive director of the South Grand Community Improvement District.

“When you put paint on, it really changes the perspective,” she said.

She’s working with the museum and art commission to preserve wood from some of the 17 businesses damaged on South Grand.

David Bailey, owner of Rooster at 3150 South Grand Boulevard, said he’ll hold on to the plywood covering his windows in case the museum wants any of it.

His restaurant, which opened there in early October, sustained 14 broken windows, including seven that spanned from floor to ceiling.

Replacements aren’t expected for a couple of weeks, but he’s ready to take down plywood covering windows that were not broken.

“The show of support has been remarkable,” said Bailey, who lives in Tower Grove Heights. “I know that broken windows and thrown rocks is not my neighborhood.”

Visual artists have connected with Ferguson in the most intimate way possible.

Ferguson waits and hopes that truce will become lasting peace

In front of Buffalo Wild Wings, some chant: 'No justice, no wings!'

Talking about property damage 'is one heck of a lot better' than talking about people shot, killed or injured, Nixon said.

Artists, families, children and protesters alike have all lent their hands to decorate the plywood boards covering businesses in Ferguson and …

Video: Shuttered storefronts in Ferguson and South Grand morph into works of art

Making art out of chaos, business owners in Ferguson and along South Grand Boulevard in St. Louis boarded up their windows with plywood when t…

Artists, families, protesters, children - have been equally drawn to the plywood that covers windows and protect businesses in Ferguson and Tower Grove neighborhoods. The artwork is transient. Much of it is already gone on South Grand Boulevard since these photographs were taken on Tuesday and Wednesday, Dec 2-3, 2014. Photo by Robert Cohen, rcohen@post-dispatch.com

Artists, families, protesters, children - equally drawn to the plywood that covers windows and protects businesses in Ferguson and Tower Grove South neighborhoods. The artwork is transient. Much of it is already gone on South Grand Boulevard since these photographs were taken on Tuesday and Wednesday, Dec 2-3, 2014. Photo by Robert Cohen, rcohen@post-dispatch.com