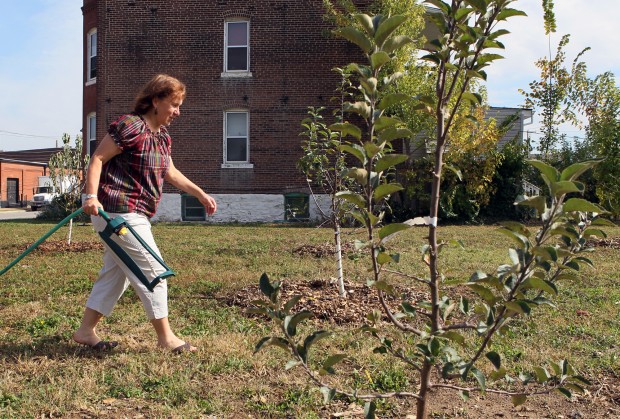 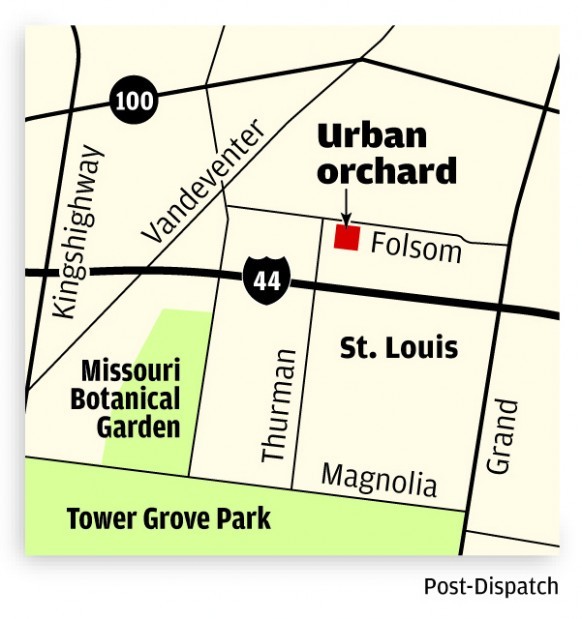 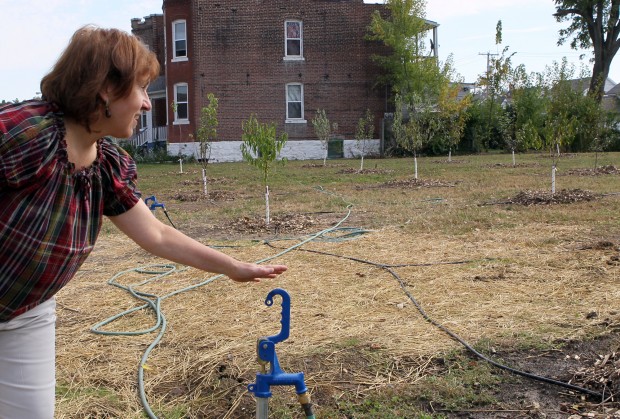 ST. LOUIS • Tomatoes and cucumbers have become a regular sight here in the past few years, with community vegetable gardens blooming in vacant lots and forgotten patches all over the city.

"The community garden thing has been around for a while," said Barbara Snell, leader of the Botanical Heights Community Garden, where the trees were planted. "The idea of planting an orchard is trailing behind, but it's here now — and it's a great idea."

As the urban farming and locavore ethos has gained ground around the country, cities from Boston to Los Angeles have started transforming public and private urban land into food-producing orchards.

"More municipalities are starting to see the benefits of fruit trees in public spaces," said Cem Akin, executive director of the California-based Fruit Tree Planting Foundation. "They're like regular trees, but they also provide food. ... They benefit communities in so many different ways."

Some call it the "public fruit" movement — the next, and in some ways more transformative, step in the "farm-ification" of the American city.

"The whole urban farm movement is huge right now," Snell said, standing among the young fruit trees. "The whole idea that people are going to go hundreds of miles for fruit has become antiquated."

So, after decades of consolidation in the fruit tree industry, mostly in Western states, cities are bringing the fruit to their own streets, yards and alleys.

"It's part of the march toward being in control of what you eat and where it comes from," said Gwenne Hayes-Stewart, executive director of Gateway Greening, which has planted fruit trees at many of its community gardens. "The community garden movement led the way."

Orchards require more money, space and heavy lifting to get started than the typical vegetable garden, but their impact, some say, is broad and longer lasting.

"It's more permanent infrastructure for food-growing in cities," said Phil Forsyth, a director with the Philadelphia Orchard Project. which has planted 20 orchards in the past three years. "The trees are established. They become part of the city."

The Botanical Heights orchard came to life after a couple days of sweat and surprise.

"We found a lot of old plumbing parts, a big piece of granite that might've been a door step," Snell said, remembering what the volunteers unearthed. "We found an old horseshoe that we're going to polish up. Some shoes. Just an assortment of stuff."

About 40 volunteers dug the holes, hauled and planted the trees, working to transform the lot, not just into a fruit-producing engine for the community, but a community hub.

"We hope this will be a unifying entity for the neighborhood as a whole," Snell said.

Nancy Landa, who lives nearby, found out about the project through a neighborhood newsletter and came over to help.

"The neighborhood was kind of blighted, and now it's coming back," Landa said. "I thought: What better way to help my neighborhood?"

The urban fruit tree projects that have popped up in American cities cite several benefits. Fruit trees are especially good carbon sequesters. They provide shade and help cool down urban "heat islands." Like other trees, they improve air quality. They beautify neighborhoods. But the most crucial thing, advocates say, is they produce healthy food in food-poor areas.

"We hope there are corollary benefits — making the air cleaner, building communities," Forsyth said. "But the simple thing is providing food security."

The fruit from urban orchards often goes to food pantries or community groups, or it gets sold at farmers markets, generating some cash. One program run by the Fruit Tree Planting Foundation gives homeless people orchard jobs and a share in the harvest.

But in most cases, the orchards offer free fruit to anyone who happens by.

"The idea is that the neighborhood would take advantage of it," Snell said. "But if someone comes over from another neighborhood and picks some apples, that's fine, too. We just don't want people coming and picking 30 bushels."

For the seeker of fruit

In some cities, though, this "open harvest" approach has opened doors for opportunists. Some orchards have been picked clean. Others have lost whole trees to thieves who have dug them up and dragged them away. Many orchards are now fenced.

But for the most part, there's enough fruit to go around.

One website, www.neighborhoodfruit.com, even guides people to fruit trees on public and private land. Fruit tree owners register their trees on the site, and anyone looking for fruit can log in and find out where those trees are.

"It was designed to connect people to urban fruit," said co-founder Oriana Sarac Tiell. "If you have a lemon tree you can post it on our map. Then you connect with the fruit seeker and decide when to arrange the pickup."

The site, which has 8,000 registered users across the country, guides people to trees on public lands, too.

"Some people don't know it's free," Sarac Tiell said. "These public fruit tree maps let them connect to the idea that food grows around them."

The trees at the Botanical Heights orchard will take a few years to produce fruit, but when they do, Snell said, anyone is welcome to it. (The trees were paid for by a grant, administered through the Fruit Tree Planting Foundation, and the only condition, Snell said, was that the fruit not be sold.)

She hopes, too, that the project inspires more people to plant more orchards. Or even just a tree or two.

"We want them to look at this as an example," she said. "We have a lot of vacant lots in this city, which is a negative that we can turn into a positive."

The Metro East and the 'locavore' movement

When a pig comes into Schubert's Packing Co. in Millstadt in the morning, there's a good chance it will be chops on someone's plate at Gallagh…

Despite 100-degree heat, work progressed today on home construction in the 4200 block of McRee, part of the Botanical Heights project near the…

Find out what's fresh this week and check out photos of some of the markets we visited this season.