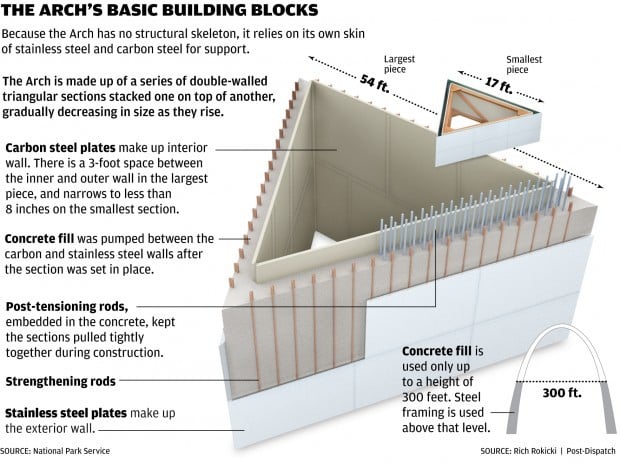 Because the Arch has no structural skeleton, it relies on its own skin of stainless steel and carbon steel for support. 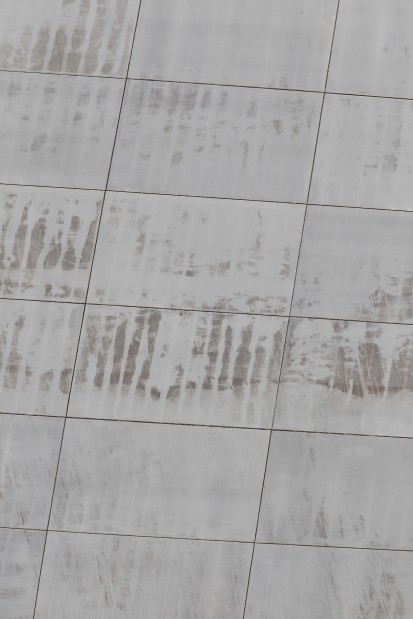 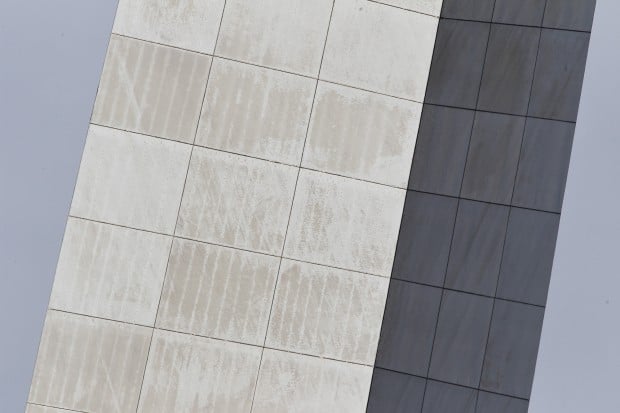 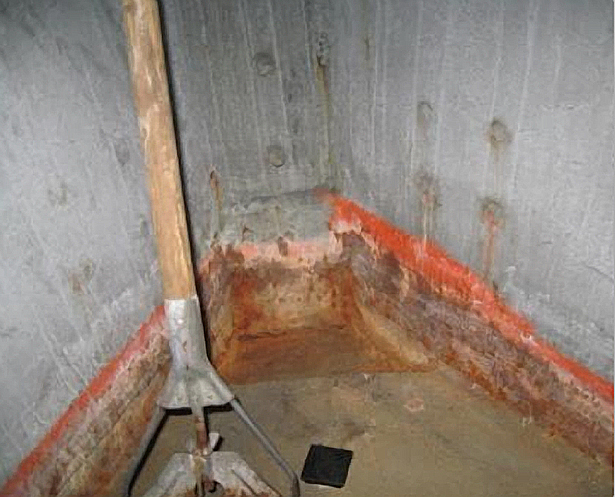 ST. LOUIS • As civic leaders reveled in last week's unveiling of grand plans to remake the Gateway Arch grounds, there was an ominous element not discussed.

Almost 45 years into its reign atop the St. Louis skyline, the 630-foot monument is suffering from growing rust and decay. And nobody knows how extensive.

Corrosion, some of it feared aggressive, and severe discoloration of the stainless steel skin have long been present, according to engineering reports reviewed by the Post-Dispatch.

The documents and interviews with metallurgists indicate that the remedy could be as minor as an "expensive" surface cleaning or as elaborate as a full-blown restoration. One report, completed in 2006, called for a deeper study, for which the National Park Service says it only recently obtained funding.

"This is not yet a health and safety issue," said Frank Mares, the deputy superintendent of the Jefferson National Expansion Memorial, which oversees the Gateway Arch. "(The report) says learn more about what's going on. It's something that requires further study."

The problems are increasingly evident, with streaks and spots marking the upper reaches of the Arch exterior.

None of the documents reviewed addressed concerns about safety in relation to corrosion, or made estimates of what remedies might cost. One speculated it could take a "long time" before corrosion would "induce any integrity concern."

Officials said the structural issues were separate from — and would not compete for funding with — plans revealed Tuesday to rebuild the Arch site in time for its 50th anniversary celebration in 2015.

"It's apples and oranges," Mares said, suggesting he is confident there will be money to do what is necessary.

The 2006 report identified corroding bolt heads and staircases, a leaky interior sometimes shrouded with its own fog, rusting of interior carbon steel and a mysterious staining of the glimmering surface.

"The exterior skin has definitely degenerated since first constructed," it said. "However it is not possible to accurately determine the rate of visual distress."

The deeper examination will analyze and test corrosion samples, to recommend steps for long-term preservation.

No repairs or changes have been made since the 2006 report, Mares said, with the follow-up study delayed for lack of funds. He said the first report cost about $150,000, and the second is expected to cost about $437,000.

A Post-Dispatch reporter was allowed to review the corrosion report for about 40 minutes earlier this month. But officials refused to make it available for a second look the next day, citing national security concerns and saying it should not have been provided the first time.

A formal Freedom of Information Act request for the material is pending, but did produce some other documents.

The first phase of the corrosion study was conducted by two architectural and engineering firms, Bahr Vermeer Haecker, of Nebraska, and Wiss, Janney, Elstner, of Illinois. Both declined to comment for this story.

Their report pinpointed several potential corrosion problems, with the culprit perhaps being water leakage. The report raised the question of whether the carbon steel interior skeleton is rusting through failed welds and onto the stainless steel outer surface.

"As the structure is subject to dynamic stress cycles, there is a possibility that welds have failed locally, generating points of water leakage into the interstitial space," the report says. "Corrosion products of carbon steel may then have stained the stainless steel surface."

Topped out in 1965, the Arch is made up of triangular sections — a carbon steel interior and stainless steel exterior — stacked and welded one atop the next. Concrete reinforces the lower half of each leg.

"It is possible that corrosion at welds or at contaminated areas is taking place aggressively," one report said.

The investigation noted a repainted area inside the south leg. "Failure of the original paint layer in this area may have been due to rusting of the steel," the report said.

It suggested taking core samples of the metal for testing, but warned that, "Removal of stainless steel from the Arch will be controversial and will require planning and much discussion."

Water intrusion has long been an issue. "Condensation in the legs has been there since day one," Mares said.

In fact, a recently filed "cultural landscape report" said: "A cursory inspection of the Gateway Arch legs and foundation construction joints in 1984 revealed defects, and possible water intrusion between the outer and inner skins. Marks on the exterior stainless steel skin are visible at about 350 feet above the ground."

Arch officials say they have set up a makeshift system of tubes and containers to try to collect water.

A year after the corrosion report was written, a steel cable for the tram system snapped inside the Arch, causing a two-hour power outage and a nighttime evacuation of visitors. Nobody was hurt. An investigation by Maida Engineering, based in Pennsylvania, blamed the quality of maintenance performed by the Park Service and outside contractors. The tram system had not been specifically mentioned in the corrosion report.

R. Craig Jerner, an expert metallurgist based in Dallas who grew up in St. Louis, said the presence of water in the structure was an obvious problem. He said that he had visited the Arch within the past five or 10 years, and that "I seem to remember seeing water streaks on steel members. My thought at the time was, 'That's a problem in the making.'"

Added Jerner, who spoke with the warning that he had not seen the reports, "The problems described are indeed serious, and it may well be expensive to fix many of the problems, if those problems do exist."

Reacting to a report passage noting "corrosion at bolt heads/fasteners in wall," Jerner said in an e-mail: "More importantly, it is possible that rust could have formed under bolt/fastener heads? If the bolt/fastener is not removed and thoroughly cleaned (or even better replaced) the repainting will merely cover the rusty bolt 'underside.' The corrosion will continue and soon the bolted connection may not be a connection at all."

The report recommended that the Arch skin be cleaned within the next 10 years.

"The initial cleaning will be expensive due primarily to access requirements, but a reusable means of access should be designed as part of the cleaning procedure," according to a 2010 Historic Structure Report.

Again, cost estimates were not mentioned.

The Arch hasn't had a full scale cleaning since the "creeper" derricks that carried materials up each leg were removed shortly after construction was completed in 1965, Park Service officials said.

Some of the construction equipment may have left "grease spots" on the Arch surface that have collected dirt over time, the documents state.

Tom Bradley, the Arch superintendent, said there were no immediate plans to clean the surface. "You don't want to do more damage through the cleaning," Bradley said.

Lower reaches have been cleaned to remove graffiti, which one report said "is changing the finished surface of the panels near the base of the leg."

Some of the nation's most significant monuments have undergone restorations within the last 30 years.

The Washington Monument was surrounded with scaffolding in 1999 when it underwent a $9.4 million renovation. Corrosion problems at the Statue of Liberty led to a $65 million, privately financed rehab.

Tracy Campbell, a history professor at the University of Kentucky, is working on a book about the Arch, which he said, "represents wealth and power in the middle 20th century, right after World War II.

"Like all buildings, it's aging," Campbell said. "What makes the Arch so striking is its sculpture and appearance. As it ages and deteriorates, the question becomes, 'How much do you want to spend to preserve it in its original state?'"

Catch up on the stories and columns you missed, including: the Arch's deteriorating condition; Missouri's new abortion law; the upshot of cred…

Severe corrosion has continued inside the Gateway Arch with no significant effort to try to stop, fix or record it, according to newly released documents from the National Park Service.

Conserving the Arch is central to National Park Service mission

Tom Bradley, a 38-year veteran of the National Park Service, has been superintendent of the Jefferson National Expansion Memorial in St. Louis…

Two injured as Arch tram stalls with 40 on board

'Scaled down' Arch redesign will be made public

No timetable offered for cleaning

"I admire greatly the efforts being put into this," Danforth said in an interview last week. "The people involved really understand that the current state of the riverfront is dreadful and forbidding."

ST. LOUIS • A top federal official on Friday viewed the rival plans for reshaping the Arch grounds and declared the project "one of our highes…

Because the Arch has no structural skeleton, it relies on its own skin of stainless steel and carbon steel for support.