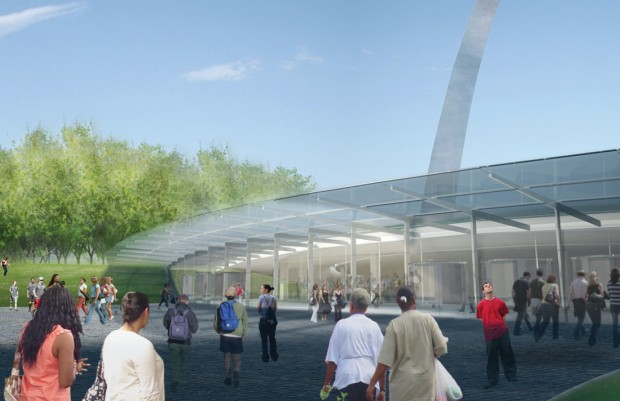 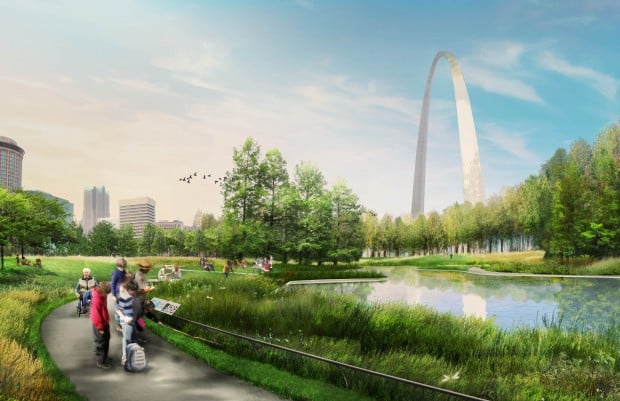 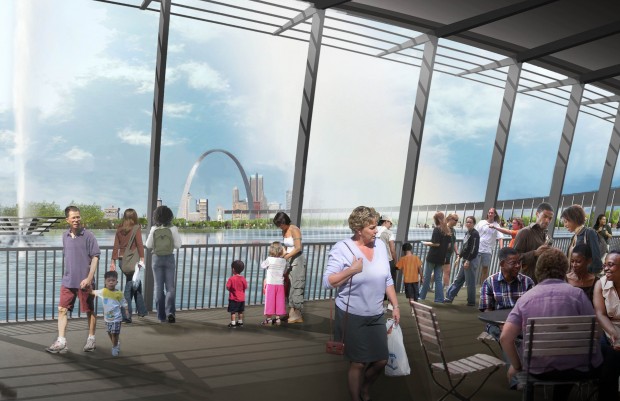 The new Arch plan by MVVA calls for a 100,000-square-foot pavilion surrounding the Gateway Geyser on the Illinois side of the river. Rendering courtesy Michael Van Valkenburgh Associates 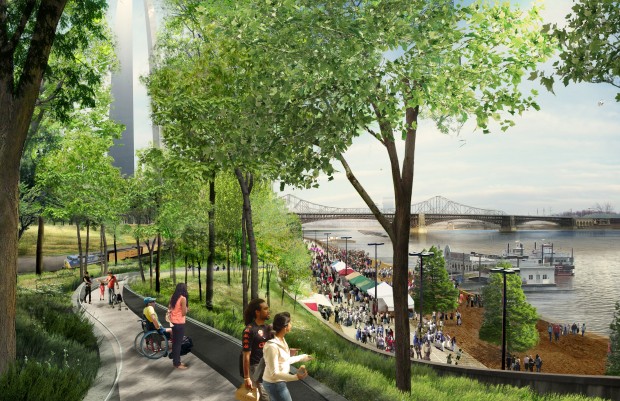 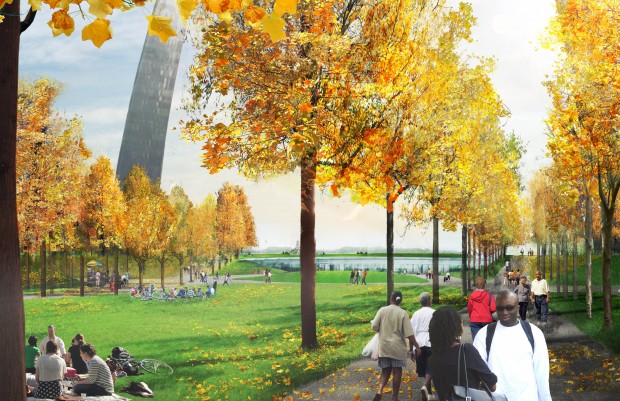 ST. LOUIS  The refined plan for reshaping the Gateway Arch grounds carries a $578 million sticker and calls for closing Memorial Drive, slinging an aerial gondola ride across the Mississippi River and using more land on the east side of the river.

It includes a "lid" over the depressed lanes of Interstate 70, an idea that has been kicked around almost since the Arch was topped in 1965. The lid would carry a wide grass promenade from the Old Courthouse onto the grounds of the Jefferson National Expansion Memorial.

CityArchRiver2015, the local foundation working with the park service on the project, and winning design team MVVA of New York provided some details before their formal announcement at 6 p.m. today at America's Center downtown. The foundation declined to provide specifics on the $578.5 million price before the evening event.

Until today, the only number in public circulation was an estimate of $305 million offered by the park service in 2009, before the design competition leading to this plan. But the park service did warn back then that the price could be much higher.

No money has been appropriated. Mayor Francis Slay, members of the area's congressional delegation and the U.S. Interior Department have endorsed the idea and promised to seek funding.

The call is for a combination of government and private sources.

Donald G. Stastny, CityArchRiver2015's competition manager, said the park service estimate contemplated work only on its riverfront grounds, while the MVVA plan reaches into downtown. Stastny, an architect from Portland, Ore., called the $578 million estimate a solid budget "that encompasses the full range of activities that we can accomplish by 2015."

MVVA's design grew out of years of local discussion about the difficulty of getting pedestrians across Memorial Drive to the Arch and of putting more attractions on the pastoral, 91-acre riverfront park. Proposals for a lid over the depressed lanes always died without funding, and the National Park Service resisted calls for significant changes to the grounds.

But in 2009, the park service amended its park plan to allow for some changes. CityArchRiver2015, a new local foundation, moved quickly with the park service to call for an international design competition that attracted 49 legitimate entries.

In September, CityArchRiver2015 chose Michael Van Valkenburgh Associates (MVVA) of Brooklyn, N.Y., as the winning team. Van Valkenburgh and Stastny have been working together since with local officials to refine the plan and prepare a budget.

"The sense of cooperation and welcome from everybody has been inspiring," Van Valkenburgh said today. "It's a pleasure to work with a community that wants a project to happen as much as this community does."

MVVA's plan includes several major changes since September, including closing Memorial Drive and adding the gondola. Some of the other four finalist teams had suggested closing Memorial, and one of them -- Behnisch Architeckten of Germany, had propose an aerial gondola.

MVVA originally proposed to make Memorial narrower at Market Street and close it some time after 2015. It also suggested a water taxi to carry visitors across the Mississippi River.

MVVA also drops its plan to build new, underground garages beneath Luther Ely Smith Park and on the south end of the riverfront grounds. It still would demolish the existing garage on the park's north end, and is considering a new garage somewhere in the Laclede's Landing area.

"The city already is full of garages that are half full," Van Valkenburgh said. "We want to make the downtown parking more welcoming and friendly."

MVVA wants to have booths downtown to sell tickets to the Arch so people can stay downtown while they await their rides to the top.

"The kids can play in Kiener Plaza," he said.

Following is a breakdown of the revised MVVA plan, noting changes:

KIENER PLAZA: Remake it as an extension of the new Citygarden, without the art. The waterfall, central state and fountain with the statue of The Runner would be replaced with Citygarden-like water activities for kids, an outdoor beer garden, an indoor restaurant, a visitors' center and more trees. (The Runner would get a new home elsewhere downtown.)

OLD COURTHOUSE: Make it accessible to disabled people and spruce up its grounds.

LUTHER ELY SMITH PARK: Raise the park ground to create a steady slope eastward from the Old Courthouse and blend it into a grass-covered lid over the depressed lanes for a promenade onto the Arch grounds. Eliminate earlier call for an underground garage, an expensive proposition.

THE LID:  Close Memorial Drive for three blocks from Walnut Street north to Pine Street, diverting traffic west to Fourth Street and Broadway. Build wide sidewalks along the north and south ends of the lid, which cover I-70 from south of Market Street to north of Chestnut. Van Valkenburgh said the original plan didn't include closing it right away, as some other finalists had suggested, out of concern that it couldn't be done in time. He said he's now confident it can.

CENTER OF THE ARCH GROUNDS: Provide new, more natural landscaping around the two ponds and a wide new glass-and-steel western entrance to an enlarged underground museum.

NORTH END: Build an amphitheater and children's area, but not an underground garage. Demolish the existing garage, as originally planned. Remove Washington Avenue from Memorial to the river as planned, and improve the congested trafficways at Washington beneath the I-70 viaduct.

THE LEVEE:- Narrow, but not eliminate, Leonor K. Sullivan Boulevard.

THE RIVER: Sling an aerial gondola on overhead cables, much like a ski lift, across the Mississippi River just north of the Poplar Street Bridge. The gondola cars would hold two or three families and run along a mile-long route to the Malcolm W. Martin Memorial Park on the East St. Louis riverfront.

METRO EAST: Expand the original 60-acre project to 100 acres, with a pavilion near the geyser and pond. Keep the existing overlook. Add the plans elevated walkway through restored wetlands after 2015.

Gallery of pictures of the design

The new Arch plan by MVVA calls for a 100,000-square-foot pavilion surrounding the Gateway Geyser on the Illinois side of the river. Rendering courtesy Michael Van Valkenburgh Associates