They snake danced. They honked horns. They drank. The party started early in St. Louis with word of Japanese surrender
0 comments
Share this
{{featured_button_text}}
By Tim O'Neil St. Louis Post-Dispatch

ST. LOUIS • In August 1945, newspapers braced readers for an invasion of Japan. More than 19,000 Americans had died taking Iwo Jima and Okinawa in the run-up to the final event. Fear of ghastly death lists sobered the yearning for victory.

"U.S. Atomic Bomb Blasts Japan," screamed the Post-Dispatch on Aug. 6, 1945, describing the mysterious flash over Hiroshima. Inside pages spilled forth details about the top-secret bomb project, including contributions of scientists at Washington University and Monsanto Co.

After the second A-bomb blast Aug. 9 over Nagasaki, the St. Louis Tavern Operators Association planned for the victory bash surely to come. "It will be no occasion for getting drunk," warned its secretary, J. Miles Bench.

The first unofficial news bulletin of surrender came by local radio stations at 2:30 a.m. on Tuesday, Aug. 14. Henry Ruggeri rushed to reopen his tavern at Edwards Street and Elizabeth Avenue.

"I must celebrate," Ruggeri said.

Honking horns and shouts from windows brought out the patrons. The tavern association's plea was lost in the joy.

Soldiers at Jefferson Barracks, who had been restricted to base awaiting official word, rushed the city. War plants stopped production. At Soldiers Memorial, an Army band played all evening to a moonlight street dance, where young women kissed any guy in a uniform. They lined up to kiss Mayor Aloys Kaufmann.

At 5228 Wilson Avenue, the family of Sgt. Ernest Pedroli, who survived the war, tapped two kegs on the sidewalk for all comers.

The next day's Post-Dispatch was filled with the revelry. But it also brought news that the USS Indianapolis had been sunk with six local sailors aboard. 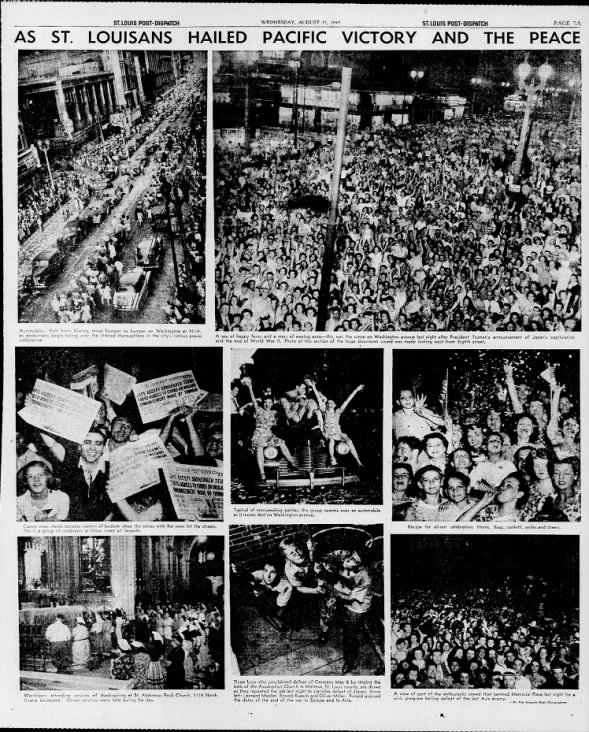 The edition confirmed three deaths: Navy Lt. George A. Gustin Jr., 24, of St. Louis, killed in the crash of his torpedo bomber; machinist's mate Robert Nickel of Lemay, killed in action; and Pfc. Meredith Cissell, 34, of St. Louis, of illness in the Pacific.

Their names joined the more than 2,550 service personnel from the St. Louis area who perished in World War II.

75 years ago: Surrender on the battleship Missouri, the end to World War II, and a prayer for peace

A battleship's guns would add a dramatic backdrop to the signing on Sept. 2, 1945. And then, there was the memory of the battleships lost at Pearl Harbor. 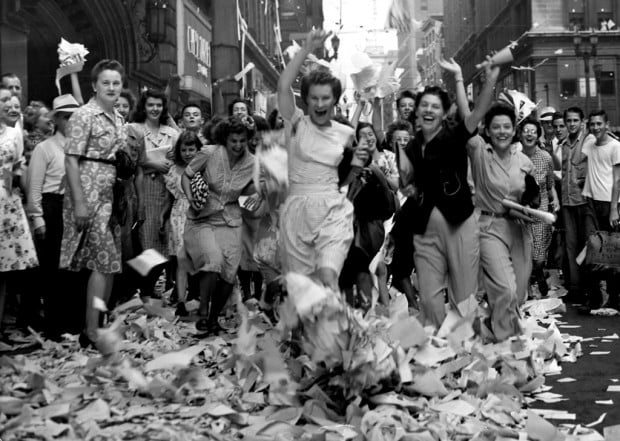 Jubilant St. Louisans charge through piles of paper on Olive Street downtown on the morning of August 14, 1945, the day Japan surrendered to end World War II. Unofficial reports of the surrender were broadcast over St. Louis radio stations about 2:30 a.m., and people who bothered to go to work that morning threw reams of paper out the windows of their office buildings. President Harry Truman confirmed the surrender at 5 p.m. central time. The United States had been fighting in World War II for three years and nine months. (Post-Dispatch) 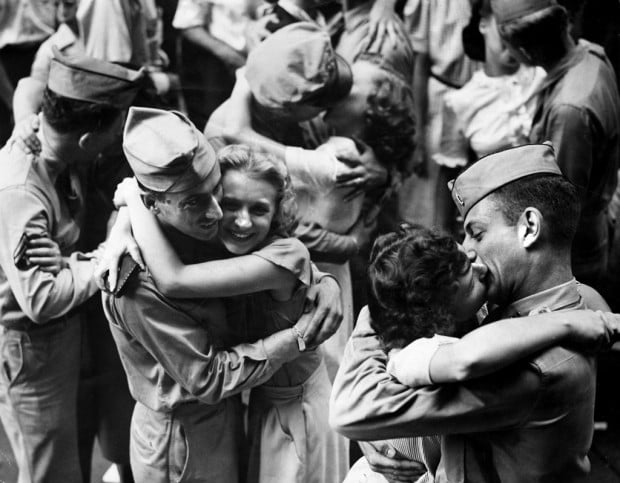 Servicemen and downtown workers embrace and kiss on the streets of downtown as word of the surrender flashed through the nation. Soldiers at Jefferson Barracks were restricted to the base until President Harry Truman confirmed the surrender at 5 p.m. local time. Many of them headed straight downtown. (Post-Dispatch) 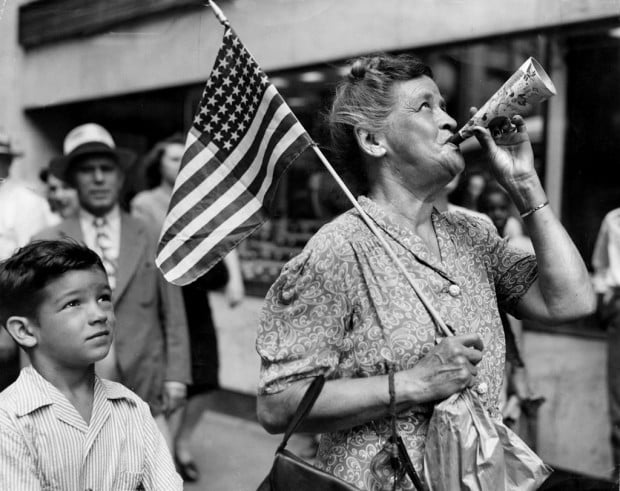 A woman toots the paper horn she bought from one of the many street vendors who appeared downtown on V-J Day. (Post-Dispatch.)