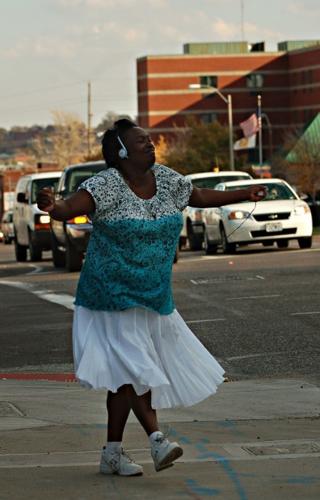 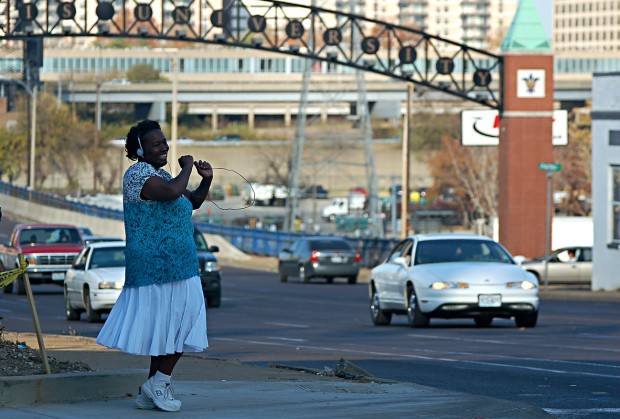 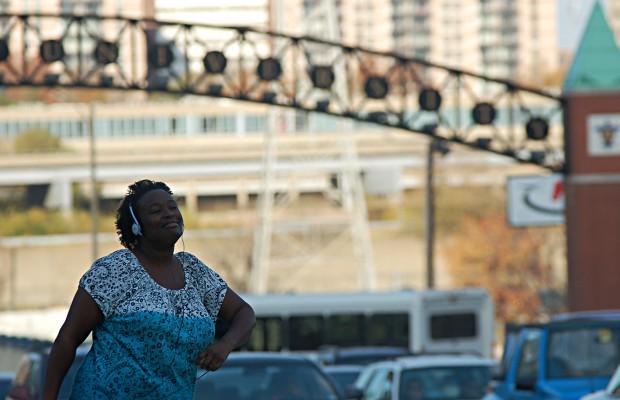 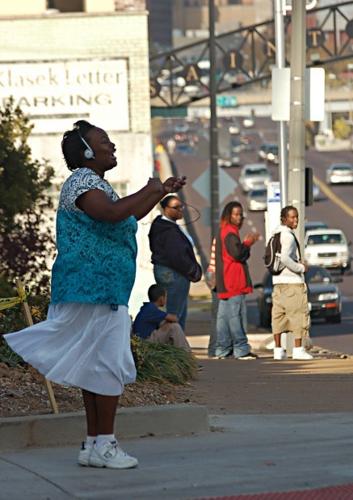 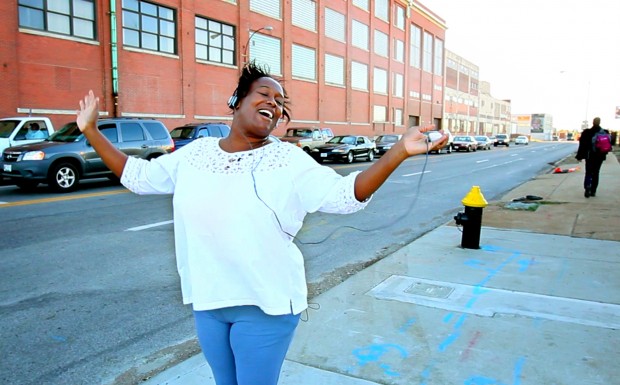 Erica "The Happy Lady" McElrath of St. Louis serenades and dances for commuters at the corner of Grand Boulevard and Chouteau Avenue in St. Louis on Oct. 26. David Carson dcarson@post-dispatch.com
BY JOEL CURRIER • | 314-340-8256

ST. LOUIS • Her only payback comes in the form of big smiles, honking car horns and drive-by fist pumps.

Erica McElrath calls herself "The Happy Lady." And by now, you may have caught her singing and dancing with her mp3 player on any of several city street corners.

McElrath lost her full-time job in January. Since then, she has spent her days doing what she loves — dancing in the street. Her message to people at a time of economic distress: do something that you enjoy, no matter what your circumstances.

"Life is not that bad," she said. "If you're working 40 hours a week, you should not be complaining."

McElrath graduated from Parkway Central High School and has spent the past 21 years working as a nursing assistant. She began singing and dancing publicly on her days off a few years ago to help her through the pain of her second divorce. ("I was too happy for him," she says.)

Her favorite spot is the northwest corner of Chouteau Avenue and South Grand Boulevard near St. Louis University. But she says she also draws stares at Jefferson Avenue and Olive Street, North Grand Boulevard and Natural Bridge Avenue, and Southwest Avenue and Kingshighway. She has also danced at intersections in St. Charles and Belleville.

McElrath's mp3 player is loaded with hundreds of classic rock hits and '80s pop songs, including those by Joe Cocker, the Eagles, Tina Turner, the Eurythmics, Neil Diamond and Toto. But her favorite artist, by far, is Stevie Nicks.

Videos of McElrath have popped up on YouTube. Her own YouTube channel, "BouncyLady40," shows a clip of her grooving to the song, "Play That Funky Music." Her Facebook profile allows people to join the "The Happy Lady Club" and features photos and video clips of her singing and dancing around town.

"People think I'm crazy, but I don't care," she said. "I can't dance a lick. I just be bouncing and going with the music."

The occasional obscene gesture from a passing motorist doesn't bother her either.

"I just smile and wave," she said.

McElrath's bravado recently earned her a job opportunity with Liberty Tax Service, which tentatively offered her a job as a dancing Statute of Liberty to promote a new location near Grand Center starting in January.

"Just be happy and do what you love," she said. "The money will come."

Residents are advised to boil water for three minutes before using it to drink or prepare food.

‘We have to do better’: Statue in St. Louis honors legal fight of enslaved Missourians

More than 200 people attended a dedication in downtown St. Louis of the Freedom Suits Memorial, a statue honoring the fight for freedom of enslaved Missourians.

GPS technology will automatically turn lights green for emergency vehicles as they approach intersections in the county.

The Juneteenth and Father's Day weekend should give the region a short break in the heat.

Erica "The Happy Lady" McElrath of St. Louis serenades and dances for commuters at the corner of Grand Boulevard and Chouteau Avenue in St. Louis on Oct. 26. David Carson dcarson@post-dispatch.com
© Copyright 2022 St. Louis Post-Dispatch, 901 N. 10th St. St. Louis, MO 63101 | Terms of Use | Privacy Policy | Do Not Sell My Info | Cookie Preferences
Powered by BLOX Content Management System from TownNews.com.
You don't have any notifications.