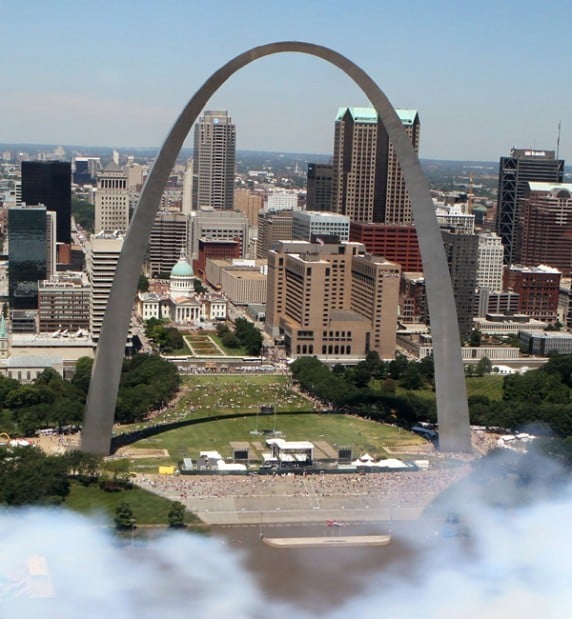 A competition to to reshape the Arch grounds and surrounding areas was announced in December 2009. (Christian Gooden | cgooden@post-dispatch.com) 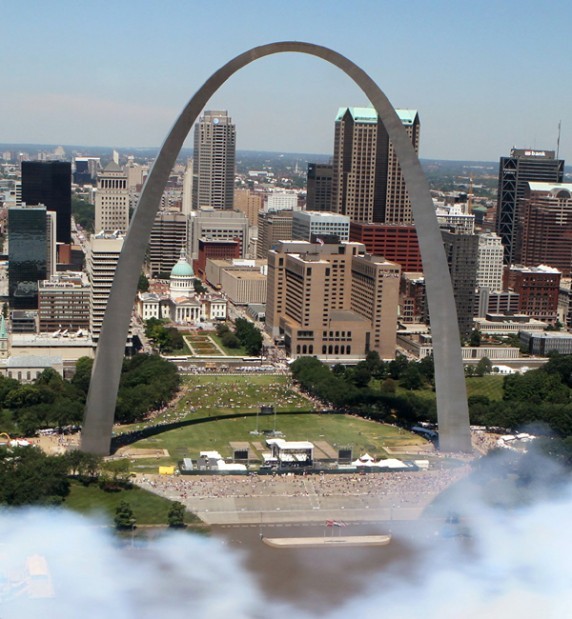 UPDATED, 2:10 p.m. to include comments from office of U.S. Sen. Claire McCaskill, D-Mo.

"We now can see what the world's most prominent designers have put onto images what we all have been thinking about," Slay said in opening remarks this morning next to the north leg of the Arch.  "I am fully committed to this project."

Slay said he has "been in awe of the Arch ever since I saw the last piece being put into place." He saw that on television as a fifth grader in Miss Knittel's class at Epiphany Grade School in south St. Louis.

Park Superintendent Tom Bradley called today "an exciting day for the National Park Service" and said the Jefferson National Expansion Memorial has always enjoyed a good working relationship with the city, downtown and the region.

The arch was topped on Oct. 28, 1965. Organizers of the effort to redesign the archgrounds and extend the park across to the East St. Louis riverbank hope to have work completed by the toppings' 50th anniversary in 2015.

After the brief remarks, the roughly 80 people who attended the ceremony went down the walkway underneath the Arch to see renderings from the five finalists.

U.S. Rep. William Lacy Clay, D-St. Louis, whose district includes the Arch grounds, said he was pleased that all five plans would "provide easier and safer access" to the park" and extend the park to the east side. Clay said the works demonstrate "creativity and talent."

As for money, he said, "I will do everything in my power to provide the resources need to complete the project in time."

U.S. Rep. Jerry Costello, the Belleville Democrat whose district includes the East St. Louis riverfront, "is glad to see the amount of care being taken to incorporate the east side," said his spokesman David Gillies. Costello is eager to review the plans in more detail, Gillies said, but can’t yet comment on financing.

This Friday, U.S. Interior Secretary Ken Salazar is to visit the Arch and view the plans. In July 2009, Salazar called improving the connection between the Arch and downtown a "priority of President (Barack) Obama, " his boss.

U.S. Sen. Claire McCaskill, D-Mo., is to accompany Salazar Friday and will review the plans. Laura Myron, her spokesman, said McCaskill supports the concept and has been discussing with federal administrators "the role of Congress in finding ways to fund this project."

ST. LOUIS • Five visions for reshaping the downtown riverfront go before the public today, offering a range of ambitious ideas for better connecting the Gateway Arch grounds to downtown and inviting more users for the park.

The ideas are the work of the five finalist design groups in the competition to reshape the Arch grounds and surrounding areas.

The competition was announced in December, and its eight-person jury is to pick a winning design on Sept. 24.

Talk of money will come later. The hope is to complete construction by Oct. 28, 2015, the 50th anniversary of the topping of the Gateway Arch.

The National Park Service and a local private foundation, CityArchRiver2015, are sponsoring the competition. After years of talk about making the Arch grounds more accessible and busier, the park service amended its master plan last year to allow for modifications to the 91-acre riverfront park.

Mayor Francis Slay and others are to formally open public viewing during a ceremony at 9 a.m. today at the Arch. Colorful display boards showing details of the five plans are mounted in the lobby of the underground museum and will be available for browsing until Sept. 24.

Another set of display boards will be moved among nine locations throughout the metro area.

Donald G. Stastny, an architect from Portland, Ore., who is managing the competition, said he was pleased with the sweep and creativity of the five plans. Each one proposes to solve the long-standing problem of getting pedestrians across busy Memorial Drive — creating some sort of "lid" over the roadway — while meeting the newer goal of expanding the park across the Mississippi River into East St. Louis.

None carries a price tag. Stastny said he will work with the winning design group to provide an estimate of cost by December, then work next year to begin finding sources of money.

The National Park Service estimates the project could cost $305 million but also warns that its figure may be low.

Walter Metcalfe Jr., a lawyer downtown and board member of CityArchRiver2015, said he is optimistic that the organization can secure federal money, support from local governments and pledges from private organizations.

"We could spend money on repairs or on this project," he said. "In a sense, we are fortunate there is so much deferred maintenance."

After the group announced the competition, 49 design groups bid to be considered. In April, the competition jury reduced the list to five finalists, whose work will be unveiled to the public today.

On Aug. 26, members of the five groups will present their cases before the jurors in a daylong public hearing in the theater beneath the Arch. The public is invited but won't be allowed to take part.

Until then, interested people can express their views on the competition website — www.cityarchrivercompetition.org — or on forms available at the Arch and with the traveling exhibit. Public comments will be included in the materials jurors review.

Where to see the designs

The designs will be displayed in the Arch visitors center starting today and running through Sept. 24. In addition, there will be a traveling …

Who picks the winning design?

The jury that will choose the winning design:

The team's proposed "Rivercircle" seeks to offer an equivalent to the National Mall in Washington with parks, promenades, performance stages a…

The team's philosophy is to celebrate the blurring of ecology with urban design, using landscaping to help make it happen.

End of the beginning for a new era of St. Louis' riverfront

The Arch competition design concepts are intricate and energizing, a sublime mix of small, medium and monumental proposals with uncounted moving parts, spanning two states and the greatest river in North America.

The team aimed for a design that would respect the original vision of Eero Saarinen and landscape architect Dan Kiley.

Except for some new seating and pathways, improving the ponds and correcting some drainage problems, the proposal mostly calls for preserving …

Dubbed the "Full Circle," the plan would connect the banks of the river in three ways: a new pedestrian-and-bicycle pathway on the north side …

Arch proposals: A glance at the five plans

A competition to to reshape the Arch grounds and surrounding areas was announced in December 2009. (Christian Gooden | cgooden@post-dispatch.com)