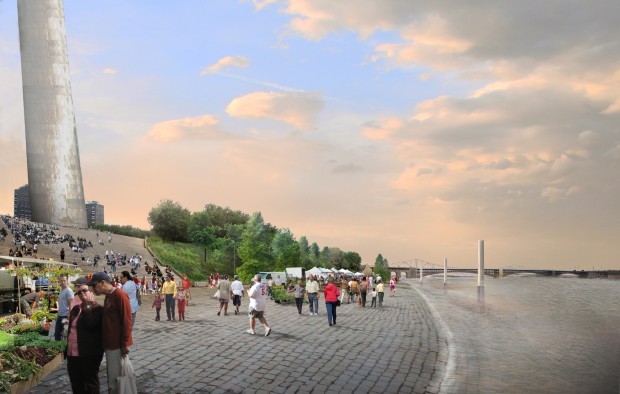 A system of treetop walkways on the east side of the river would create new views of the Gateway Arch and an urban habitat for birds, under the MVVA team proposal. 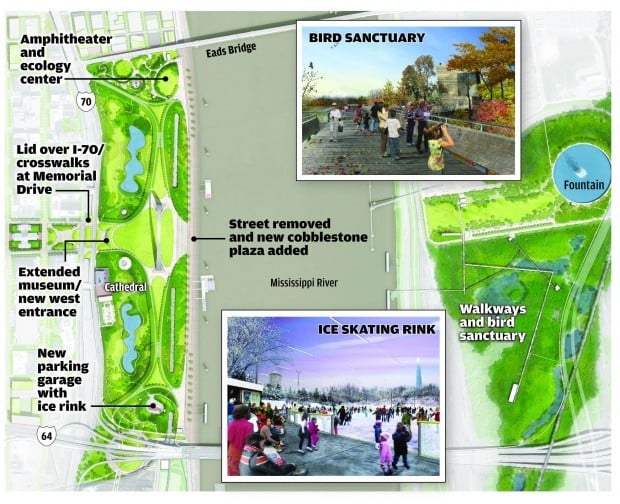 (UPDATED AT 5:15 P.M., with official release from organizers and comments)

Michael Van Valkenburgh Associates, a New York firm that has worked on more than 350 landscape architecture and urban planning projects, has been picked as the winner of the competition to reshape the Arch grounds.

"MVVA is an oustanding team that presented a winning combination of the ambitious and the manageable," Tom Bradley, superintendent of the Jefferson National Expansion Memorial, said in a statement released this afternoon. "They showed great reverence for the beauty and significance of the existing site, while suggesting improvements and attractions in line with our competition goals."

MVVA was one of five finalists for the right to redesign the Arch grounds.

Its plan called for features such as a riverside cobblestone plaza, an amphitheater, a bird sanctuary and a lid over Instate 70. But over the next 90 days, the team will work with the city of St. Louis and the National Park Service to refine the plan, including assessing "the feasibility and practicality of proposed solutions," according to a release from the organizers of the competition.

The group will also come up with a construction budget and a fundraising plan. Up to now, officials have not offered ideas for how to fund the redesign, saying they were confident funding sources can be found. Several area members of Congress have pledged their support.

"Between now and January, we will be challenging the MVVA team to rise to the challenge to do what's best for the city, for the region and for this national park," said St. Louis Mayor Francis Slay.

MVVA will be officially introduced at a news conference at 10 a.m. Friday in the Old Courthouse. A panel of eight architecture experts has been reviewing the proposals since last month, when the five finalists made formal presentations of their plans at America's Center.

Members of the teams began receiving calls on Monday informing them of the news, and word of MVVA's selection soon spread. The blog urbanstl.com first reported MVVA's selection this afternoon. Later in the day, competition organizers made the news official and released their statement.

The Park Service and a local foundation, CityArchRiver2015, launched the competition earlier this year, with the goal of adding attractions, better connecting the Arch grounds to downtown, and expanding across the river into Illinois.

The Park Service has said it wants the project done by Oct. 28, 2015, the 50th anniversary of the topping of the Arch.

-- Removing the existing parking garage on the north end of the grounds and replacing it with an amphitheater, playground and new entrance to Laclede's Landing.

-- Adding a garage on the south side, with the top used for an ice rink in the winter and a beer garden in the summer.

-- Replacing many of the trees on the grounds to create more uniform walkways.

-- Adding a cobblestone plaza between the Arch and the river for markets and events.

-- Adding elevated walkways on the Illinois side, reaching 35 feet and winding through a new bird sanctuary. The sanctuary would be created by capturing East St. Louis stormwater, forming an urban habitat for a diversity of birds.

-- A lid over I-70 that would lead to a new western entrance and into an expanded museum below the Arch.

More information about MVVA's plan and the other four finalists can be found at cityarchrivercompetition.org.

The ash trees framing the Gateway Arch landscape will ultimately be replaced by one of eight other species.

Funding will be sought from government and private sources. A gondola ride across river will be featured.

"Successful city connections give people two inseparable things: ways to traverse urban obstacles and reasons to want to. Our landscape-based …

A system of treetop walkways on the east side of the river would create new views of the Gateway Arch and an urban habitat for birds, under the MVVA team proposal.