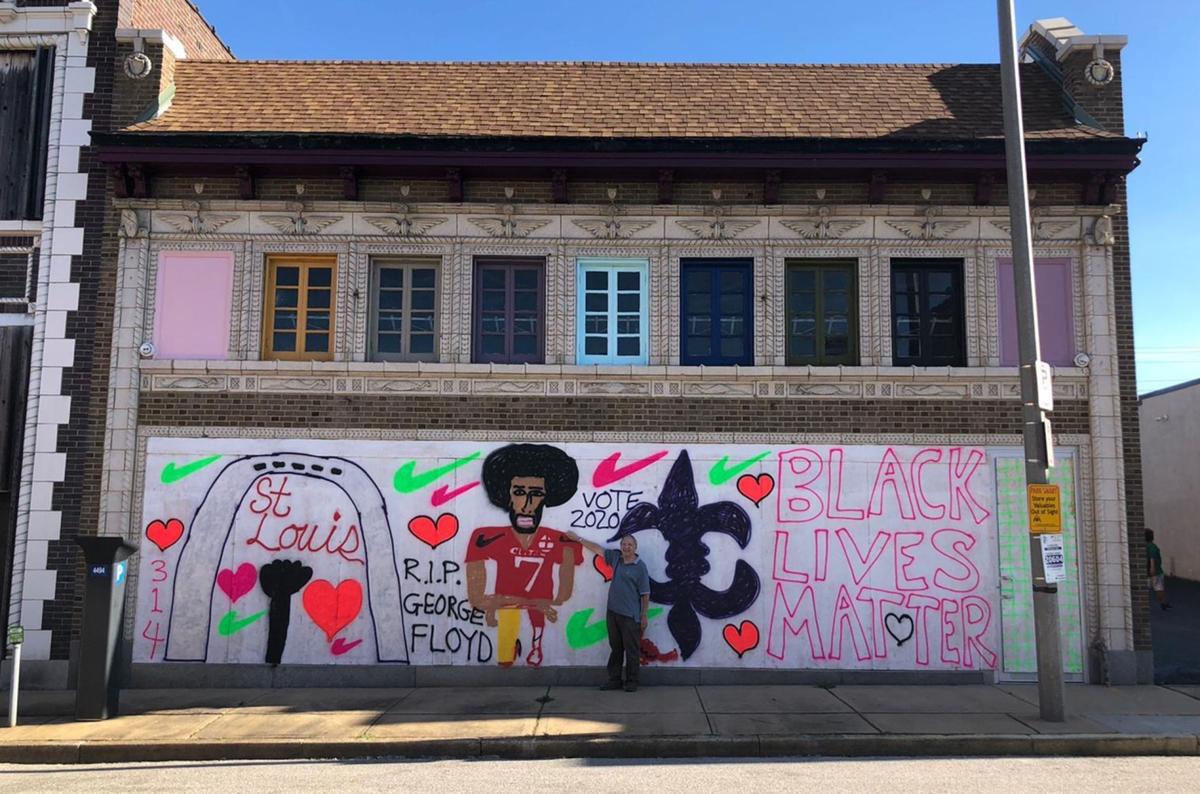 A mural painted by Katherine Bernhardt on a building she owns in the 2800 block of Locust Street. Photo courtesy Elizabeth Bernhardt. 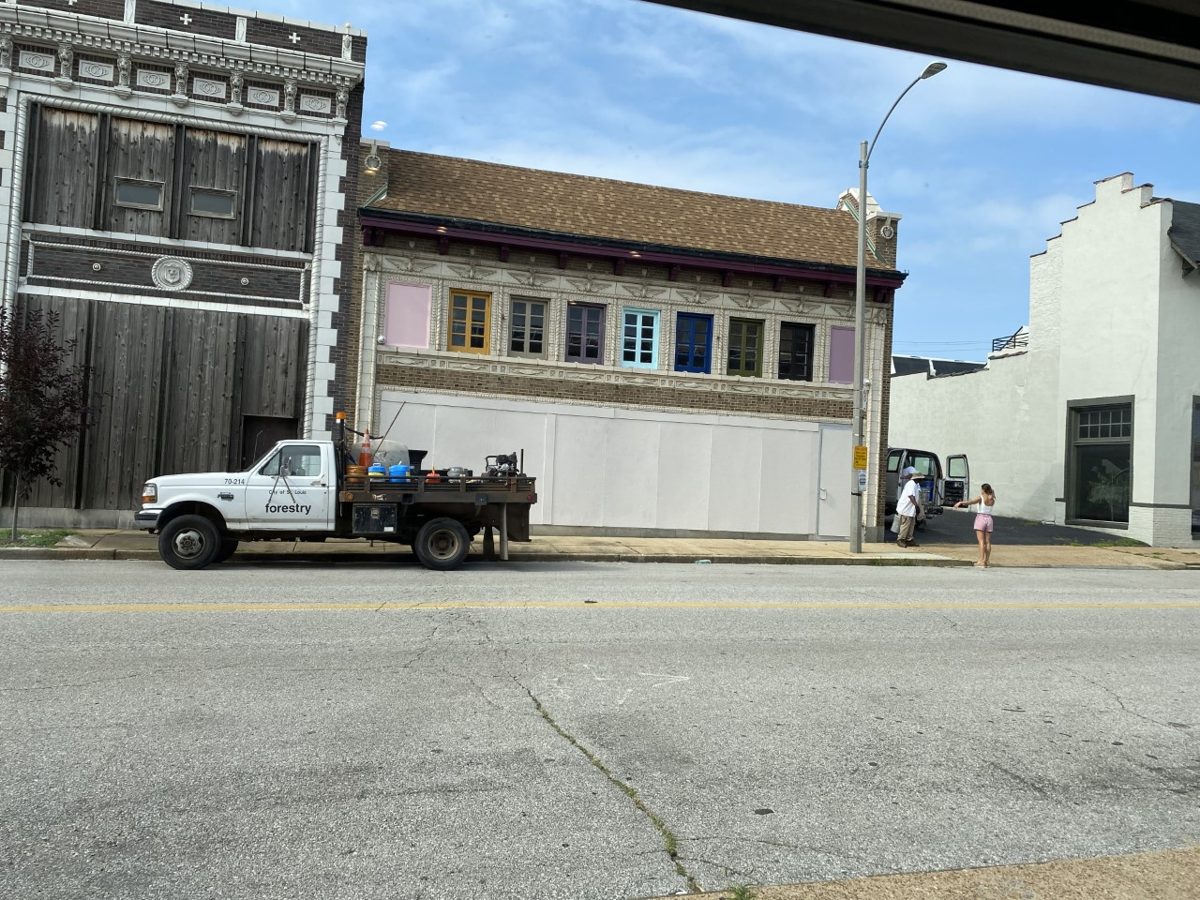 ST. LOUIS — A Black Lives Matter mural created by St. Louis artist Katherine Bernhardt was whitewashed this week by a city-affiliated graffiti removal program, despite the fact that the artist painted the work on her own property.

Bernhardt, a painter whose work has been featured at the Contemporary Art Museum St. Louis among other galleries and museums, created the mural on plywood covering windows of a Midtown building she bought to store her art.

The mural featured images of former NFL star and political activist Colin Kaepernick, the Gateway Arch and a fleur-de-lis, a symbol on the St. Louis flag, painted in black to represent the Black people in the city, the artist said. Bernhardt also spray painted the message “Black Lives Matter” and “RIP George Floyd.”

“I wanted to paint something to show support of the movement going on right now,” she said.

But on Monday, Brightside St. Louis, a nonprofit that gets federal and city funding and handles the city’s graffiti removal, covered up the painting in the 2800 block of Locust Street.

Art at a distance: Museums, galleries and fairs are quiet, but artists find ways to keep creating

If there's no public to see it, there's not much point in mounting a public art project.

African American artists are making sure their voices are heard and appreciated, while some companies and institutions are also providing support.

The removal followed a resident’s complaint to the city’s Citizens Service Bureau about the mural. The complaint was forwarded to the nonprofit, according to Jacob Long, a spokesman for Mayor Lyda Krewson.

Brightside sent a letter about the complaint to a New York address listed for the LLC Bernhardt used to buy the building, Long said, but did not get a response within the required eight days.

Bernhardt said she did not receive a letter.

Long added that Operation Brightside workers believed the mural had been defaced from its original condition.

“Normally when something is very clearly a mural Operation Brightside will leave it alone,” Long said. “But in this case it appeared the mural itself had been defaced.”

Bernhardt and her family dispute that, according to the artist’s sister Elizabeth Bernhardt, who helped track down what happened to the mural while her sister was in Puerto Rico for business.

“My sister’s assistant saw the mural Sunday night and there was nothing wrong with it,” Elizabeth Bernhardt said, adding that the family had been keeping an eye on the mural because they had received a letter from a neighboring business owner saying she would paint over it if the artist didn’t take it down.

“She argued it would encourage graffiti in the rest of the Midtown,” Elizabeth Bernhardt said. “But so many other people in the neighborhood loved it. They came and took pictures with it. They posted it on Instagram.”

The artist, Katherine Bernhardt, said Monday that she thinks the complaint came from a neighbor who just didn’t like the mural’s message.

“I don’t even know what to say,” she said. “I was going to eventually take it down and save it. This whole thing is disgusting.”

The artist’s sister said she believes the removal will also have a financial impact.

“My sister has sold murals for hundreds of thousands of dollars, so there’s a real monetary value here,” she said. “But it’s also just an attack on the Black Lives Matter message, and it’s an attack against art in general to destroy someone’s artwork on their own building.”

Mary Lou Green, executive director at Brightside St. Louis, said the workers would not have removed the painting had they known the owner wanted to keep it.

“I apologized to the artist,” Green said. “We are removing graffiti from about 3,800 locations a year and in this case we removed something that unfortunately the property owner wanted to keep. We didn’t know.”

How you can get your art on in St. Louis without leaving your car

Get a gander at the murals you can find in all corners of the city that offer some history, some humble-brags or just some pretty pictures.

A mural painted by Katherine Bernhardt on a building she owns in the 2800 block of Locust Street. Photo courtesy Elizabeth Bernhardt.