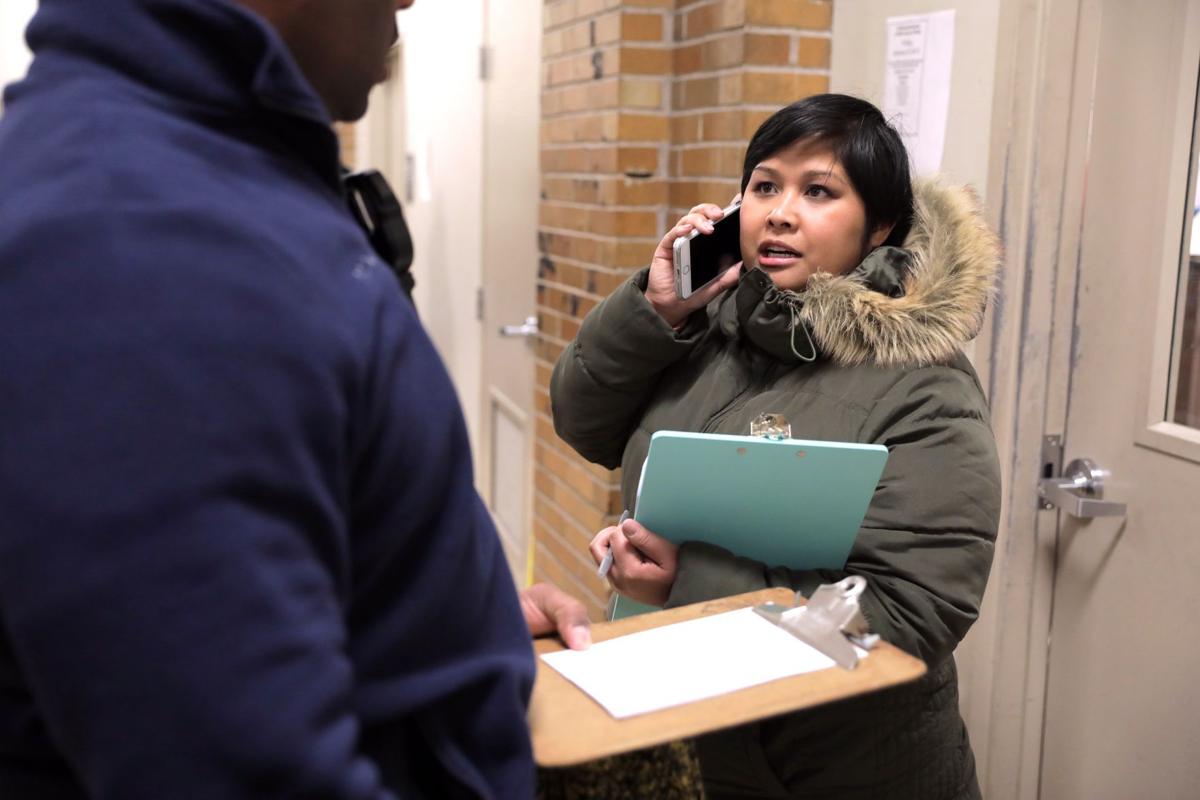 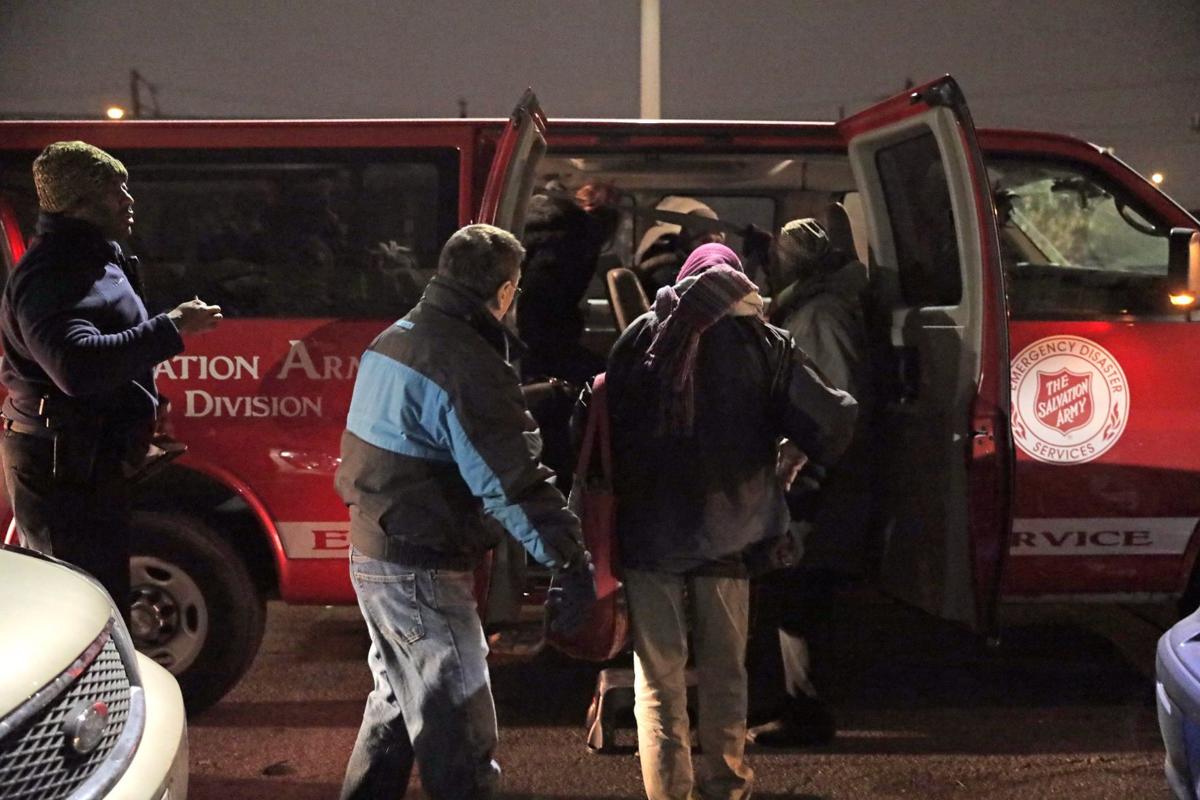 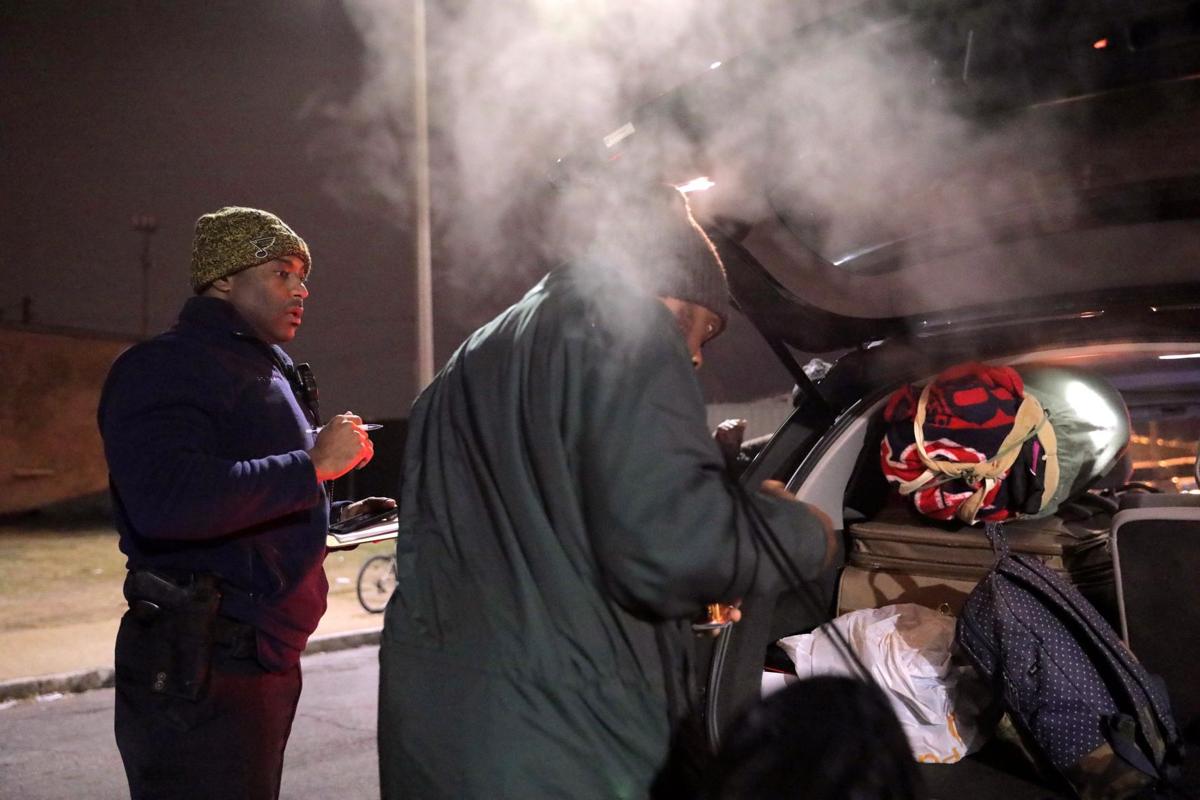 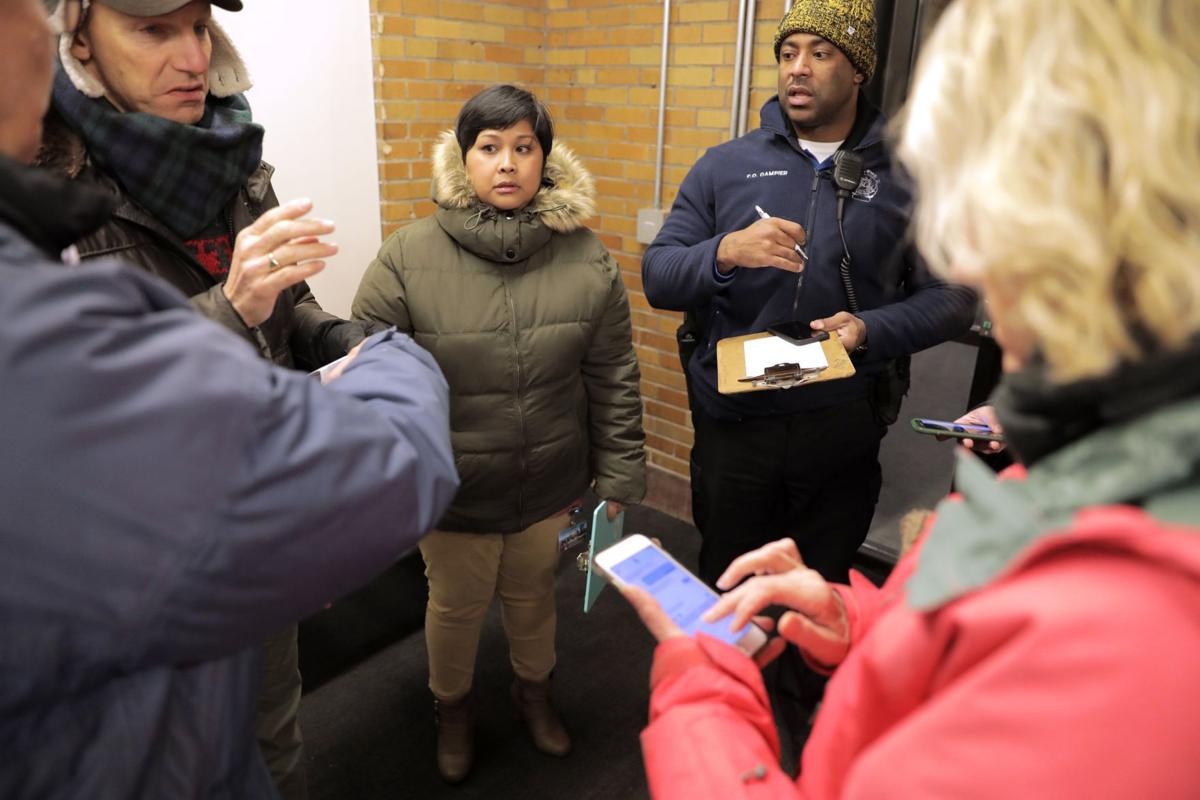 They were there to shuttle those who are homeless to various emergency shelters throughout the city, a coordinated effort to keep people off the streets during a prolonged patch of extremely cold nights.

Police Officer Larry Dampier, who has coordinated the efforts the past two years, stood in the lobby with a clipboard, matching those who needed a warm place to stay with volunteers who came to drive them to shelters, many of them in churches.

“I can take six,” one woman driving an SUV said.

“I can take three or four,” said another woman with a similar-size vehicle.

Dampier escorted each person waiting for a warm night’s sleep to his or her corresponding vehicle, told each of them which shelter they would be staying in and made sure the drivers knew where they were heading.

The officer’s efforts are part of the St. Louis Winter Outreach program, a network of volunteers who check on the well-being of the homeless during extreme weather. They encourage those living on the streets to go to an emergency shelter, and provide water, food and clothing to those who opt to stay outside. The volunteers also serve as the shuttle service and run the emergency shelters.

“My hat goes off to the people out there volunteering their time,” Dampier said. Without them, “it wouldn’t work.”

When the temperature drops to 20 degrees or below, the city moves into winter shelter mode, calling on church groups and other organizations to open emergency shelters and help encourage those living outside to come in. Dampier, who has worked with the homeless for about six years, said cold weather hit hard a vulnerable population, one often dealing with health problems, inadequate clothing and no permanent shelter.

Dampier said police could not legally compel someone to seek shelter, but he has teamed with paramedics to try to persuade the homeless to move inside. Doing so can be a tough sell. Among six people who have refused to come in this winter, only one eventually agreed to do so after an hourlong conversation with paramedics. The woman was taken to a hospital for treatment to exposure.

The city opened Biddle House in August 2016, offering a 24-hour shelter that includes beds for 94 men at night. But during extreme weather, additional beds for men are made available at Biddle, giving priority to the elderly and disabled. Others, including women and children, who sign up for shelter through Biddle House are shuttled to one of the 14 other emergency shelters.

From Dec. 7 through Thursday, the emergency shelters had been open for 13 nights, providing 1,434 beds.

On Thursday night, Transformation Christian Church on Page Boulevard, in the city’s Vandeventer neighborhood, hosted 18 people in its gymnasium.

“We feed them a hot meal for dinner, and when they get up, feed them breakfast,” church administrator LaShunda Durham said. She said helping those less fortunate fit the church’s mission and provided an opportunity to connect those who are homeless with the Gospel and to church classes on overcoming addictions.

“It feels good and makes you feel like you are making a difference,” Durham said.

Dampier said ministering to the homeless was expected from church groups. But not all those seeking shelter want to hear it.

“They will say: ‘Hey, I just want to come and be left alone and sleep.’ It’s not something they are forcing on anybody,” Dampier said.

A winter without NLEC

This winter marks the first without New Life Evangelistic Center, the downtown walk-up shelter run by Rev. Larry Rice. The 40-year-old facility was forced to close in April after being cited for operating without an occupancy permit and various building code violations. Rice said more than 200 people stayed overnight at New Life and warned that when it closed, St. Louis residents would wake up with homeless people “in their backyards, in the alleys, everywhere, and the city leaders convincing themselves that they solved the problem.”

Biddle House was opened, in part, in anticipation of New Life’s closing. City leaders insisted then, as they do now, that the city-owned facility provides comprehensive services that will ultimately get people into permanent housing, connected with jobs and assistance for mental health and substance abuse issues.

Irene Agustin, who in October became director of Human Services, the department that oversees homeless services, said the opening of Biddle House brought with it a coordinated entry program. That means that any member of the city’s Continuum of Care, which includes 70 partners who deal with the homeless, refers people to Biddle to identify specific needs.

The U.S. Department of Housing and Urban Development, which provides funding for homeless services, has set Jan. 23 as the deadline for all cities with a Continuum of Care network to have in place a coordinated entry program.

Before, Agustin said, “what we saw was that we had so many nonprofits with so many messages and no common assessment tool. Sometimes, we were helping the same person and not helping very well.”

Agustin said the city had the capacity to help all in need with the right coordination, and with the absence of Rice, who was not a partner in Continuum of Care and did not share occupancy numbers with other agencies.

“Anybody needing shelter, we can accommodate,” Agustin said.

Dampier said a walk-in shelter such as Rice’s was not the answer to solving long-term homelessness, and he pushes back against such suggestions. When extreme weather hits and temporary shelters are needed, “the churches have stepped up.”

As for St. Louis County, it partners with The Salvation Army to provide an overflow shelter at the nonprofit’s Family Haven homeless services center.

The facility on Page Avenue in the northwest part of the county typically provides 74 beds year-round, but adds 48 during the winter.

“For the most part, these are people who have been chronically homeless, living in abandoned houses or literally living in the streets,” said Gary Busiek, divisional social services director for The Salvation Army. While the shelter provides a respite from the cold, “the real underlying intent is to draw people in to identify what their needs are and meet those needs during their shelter stay.”

TWO WAYS TO HELP THE HOMELESS

• Biddle House accepts donations through St. Patrick Center, one of the operating partners for the homeless shelter.

Deadly strain of K2 that's killed in Illinois has landed in St. Louis

Police scramble to get ahead of spreading menace.