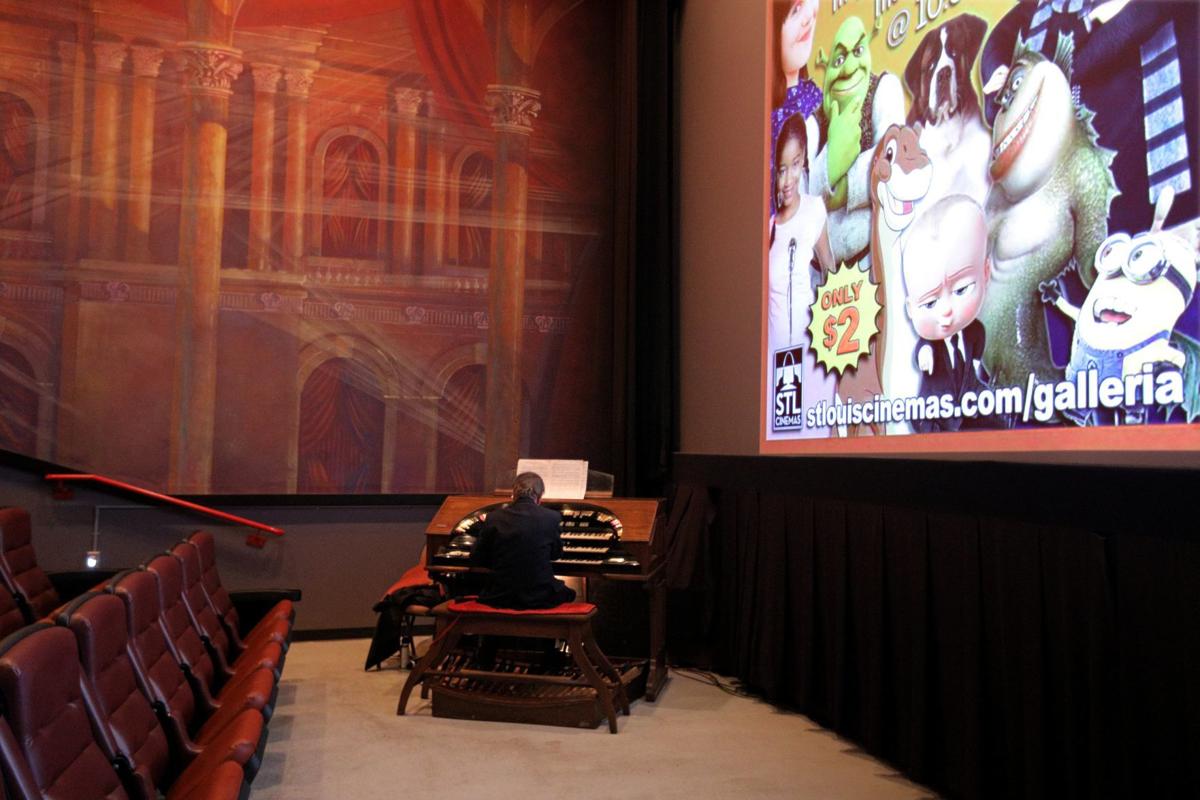 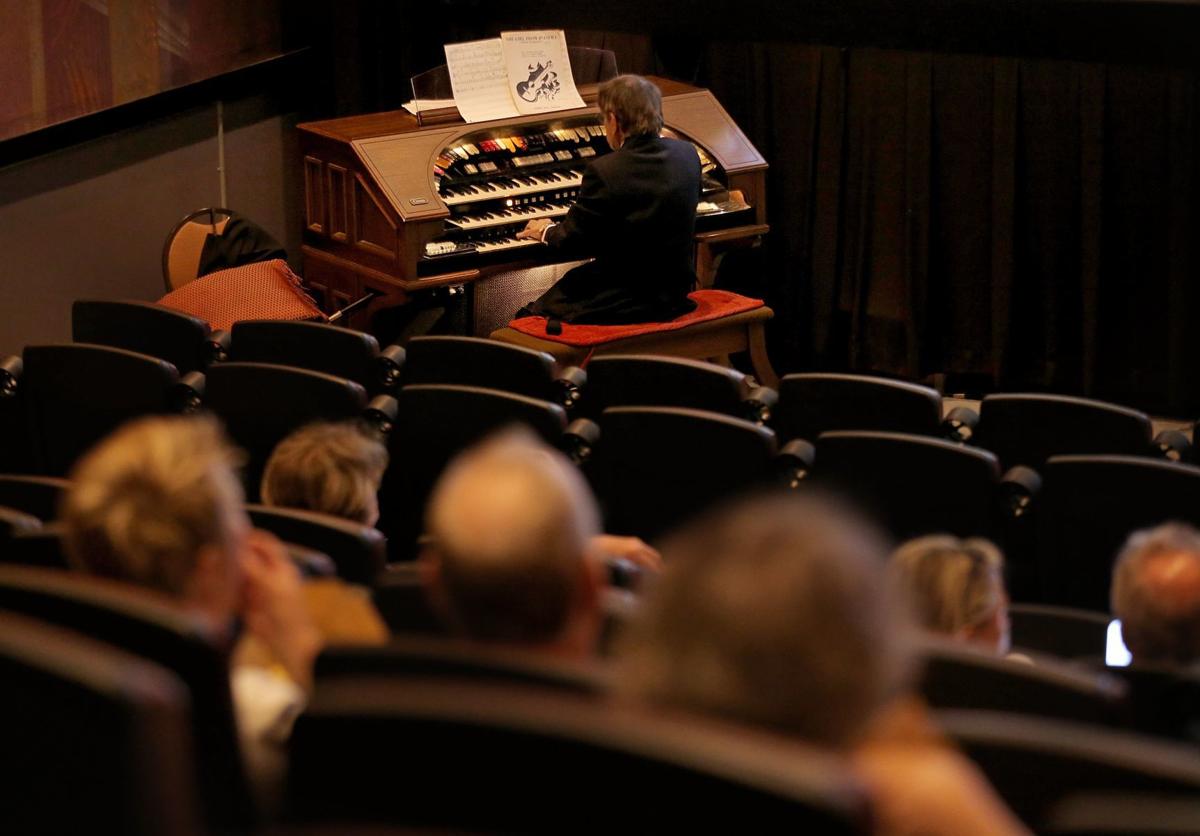 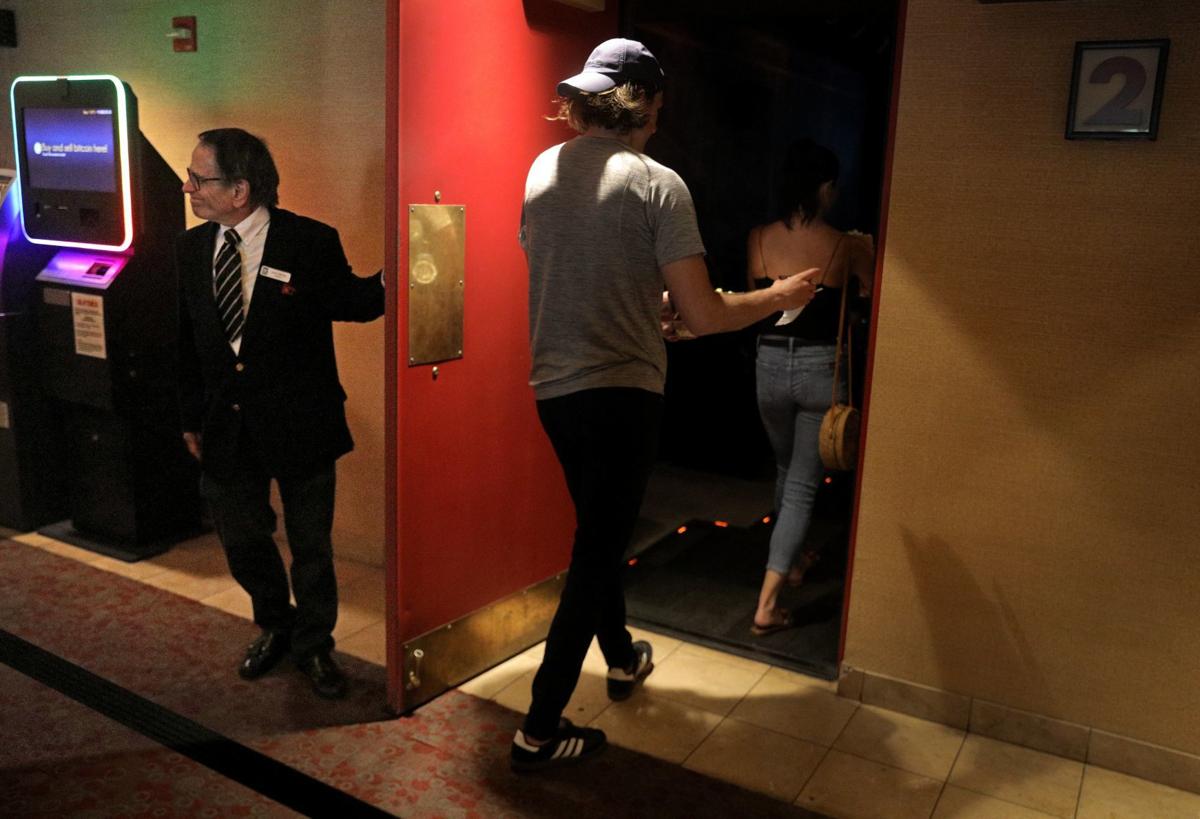 Gerry Marian holds the door for movie patrons entering Theater 2 on Friday, Aug. 2, 2019, at the Chase Park Plaza Theatre. Marian is primarily the organist at the movie house who plays standards in one of the theaters between film showings. Photo by Christian Gooden, cgooden@post-dispatch.com 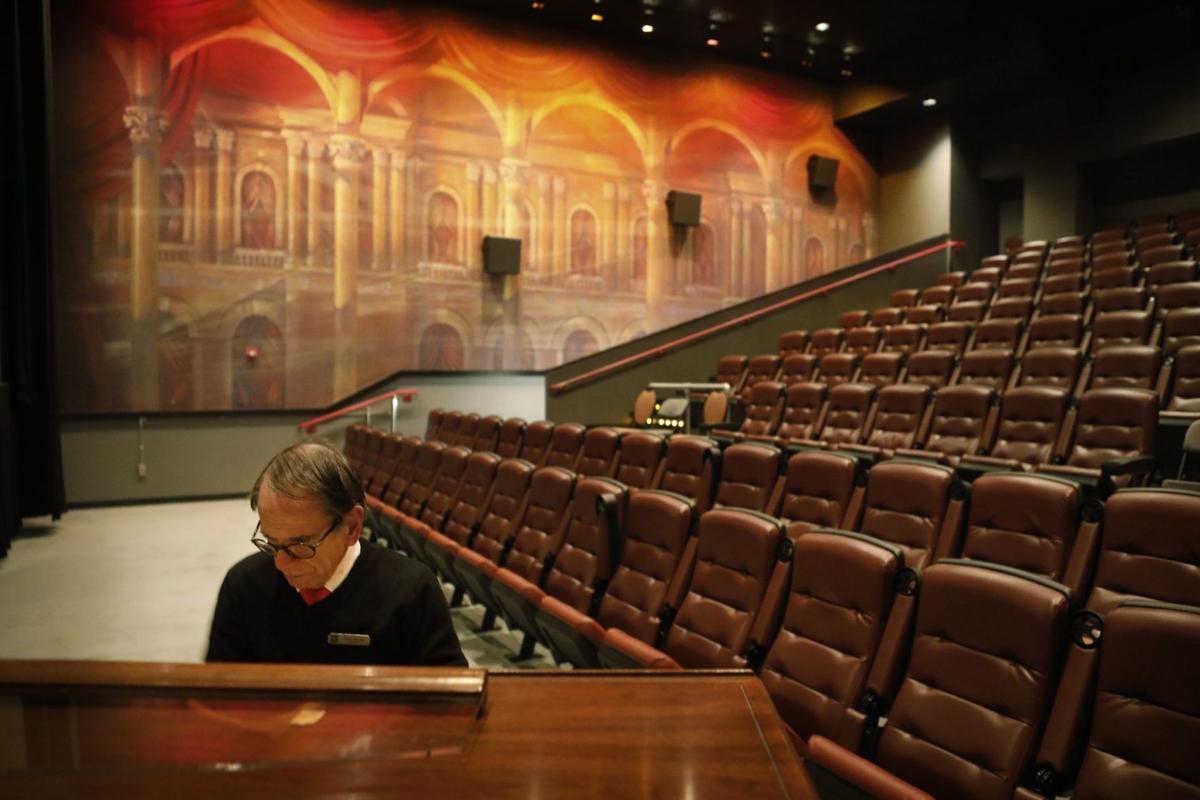 Organist Gerry Marian still plays the organ daily at the Chase Park Plaza Cinemas. On Thursday, July 25, 2019, Marian was playing in the main theater while he waited for movie patrons. Photo by J.B. Forbes, jforbes@post-dispatch.com

ST. LOUIS — On a recent morning, a 70-year-old man in a red tie swept the floor of the Chase Park Plaza Cinema in the Central West End. When the show got out, he offered customers Tootsie Rolls and hard candy on a silver tray.

But it's another duty that gives Gerry Marian the most joy in his job.

About 20 minutes before shows most Friday and Saturday evenings, Marian takes a bow and sits at his Conn 652 electric organ tucked in the corner of Theater No. 3. He's been playing the same instrument there for the past 20 years, since the cinema opened in the lobby of the historic Chase Park Plaza hotel in 1999.

Today, Marian is the last regular movie theater organist he knows of in St. Louis, and one of the few still playing every weekend in a cinema just about anywhere.

"It adds a sense of class," said Will Werner, manager of the Chase cinema. "I get pretty regular emails asking when he's going to play."

Most of the time Marian plays show tunes or movie classics, sometimes to just a few customers who make it into the theater before the trailers begin.

Marian's family history with his instrument dates back some 100 years in St. Louis to a different time, when organs were found in nearly every movie theater in the country.

His father, Milton, was an organ repairman in south St. Louis, and helped install the Fox Theatre's multistory Wurlitzer pipe organ when the venue first opened as an opulent cinema in 1929.

At the time, silent films starring Buster Keaton and Greta Garbo were the hits of the day. The organ — with its ability to mimic just about every instrument in an orchestra — was needed as musical accompaniment. Organists captured the emotion of a scene by following cues from studios, like "panic music for 16 bars."

By that time, the decline of the cinema organ was in sight.

Two years before the Fox opened, "The Jazz Singer," the first popular feature-length "talkie," made its debut. And by 1935 the Fox put live organ music on hold.

The theater organ wasn't entirely dead. In 1953 Stan Kann took up the Mighty Wurlitzer's keys, playing between showtimes at the Fox. Kann played at the theater for 22 years and became a St. Louis celebrity, appearing on local TV shows, and eventually the Tonight Show. His performances were broadcast in the 1960s and 1970s on national radio, live at Ruggeri’s Restaurant on the Hill.

"Right then and there I told him that was what I wanted to do," Marian said. "Play the organ like Stan, and that's exactly what I did."

Marian began learning the organ and, after he graduated from Southwest High School in 1968, started an internship under Kann at the Fox. He filled in on weekday showings, went on to Washington University, graduated in 1974 with a major in classical pipe organ, and took organ gigs wherever they came.

He played at churches and got a lot of work from a nationwide trend, "pizza and pipes," during which Italian restaurants hired organists to play through dinner. Marian played organ at Ruggeri's in front of hundreds, and took gigs at the Old St. Louis Noodle & Pizza Company in the Central West End, not far from where he still plays today.

By the early ’80s, the Fox had closed and reopened as a performance space and the trend of organ music while people slurped their spaghetti was ending, too.

For years, Marian worked odd jobs and played organ where he could: He was a nursing assistant at Delmar Gardens assisted living, worked at a title loan business and for a time washed lenses at the Mueller Optical Company.

Then in 1999, Marian was offered a spot at the new Chase Park Plaza Cinema when opened by Harman Moseley. Moseley operates St. Louis Cinemas, which also runs the Galleria, MX theaters and the Moolah Theatre & Lounge, where Marian occasionally plays.

No end in sight

Marian banged the top of his Conn 652 organ as he tried to resume his rendition of "Be Our Guest" from "Beauty and the Beast." He lifted the cover to inspect its intricate inner-workings.

He treats the organ like a vintage car he loves, though it tends to break down. The repair man who used to specialize in the instrument has retired, so Marian now relies on movie theater staff to help him tinker.

Marian eventually gets it going — even though a couple of the instrumentalists in the organ's "orchestra" seem to still be out to lunch.

Beyond show tunes, Marian loves playing Frank Sinatra, dramatic songs like "Diamonds are Forever" from James Bond films and will even occasionally learn songs to fit the film. When "Mama Mia" was showing, for example, he learned a whole set of songs from the band ABBA, featured in the movie.

"People were dancing in the aisles for that one," he said. "Oh they loved it."

Marian is 70 now, and has no plans to stop playing at the Chase. He's planning to accompany two showings of the silent 1926 "Phantom of the Opera" with his organ in October and a silent version of "A Christmas Carol" in December.

Sometimes the organ doesn't work perfectly, or people talk over his playing, but on a recent Saturday night Marian got full applause and a call for an encore as he finished his set.

He stood at the center of the theater and gave his customary bow, buzzing with pride.

Then he walked out of the theater, back to taking tickets at the door.

Gerry Marian will be playing along with the 1925 silent film "Phantom of the Opera" Oct. 26 and Oct. 27. Tickets are $5. He can also be seen most Friday and Saturday nights playing before shows in the cinema's Theater 3.

The local Urban League is dedicating $100,000 to a new scholarship fund in Buford's honor for promising students in St. Louis.

Medical marijuana patients still can buy product in the store, which will be back to business on Tuesday.

UMSL, which owns the club, is looking for a new operator.

Gerry Marian holds the door for movie patrons entering Theater 2 on Friday, Aug. 2, 2019, at the Chase Park Plaza Theatre. Marian is primarily the organist at the movie house who plays standards in one of the theaters between film showings. Photo by Christian Gooden, cgooden@post-dispatch.com 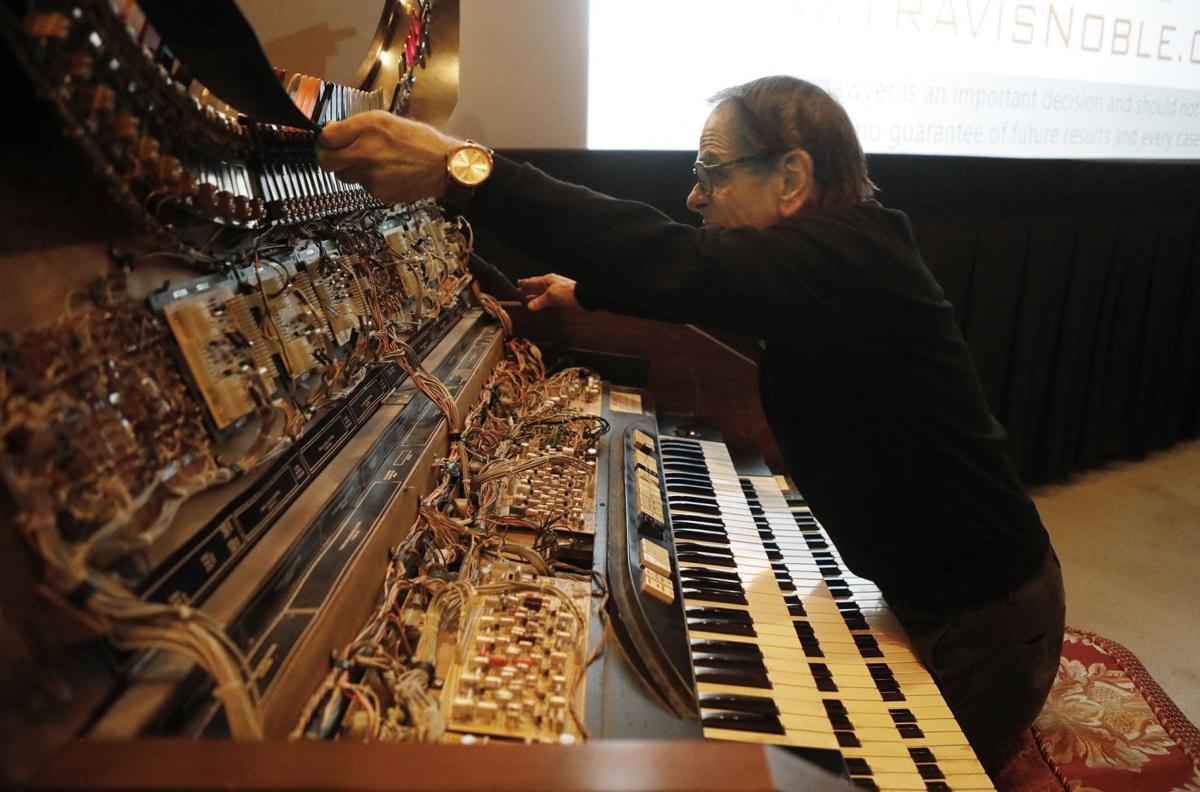 Organist Gerry Marian still plays the organ daily at the Chase Park Plaza Cinemas. On Thursday, July 25, 2019, Marian tried to get a faulty key to play correctly on the electronic organ. Photo by J.B. Forbes, jforbes@post-dispatch.com

Organist Gerry Marian still plays the organ daily at the Chase Park Plaza Cinemas. On Thursday, July 25, 2019, Marian was playing in the main theater while he waited for movie patrons. Photo by J.B. Forbes, jforbes@post-dispatch.com 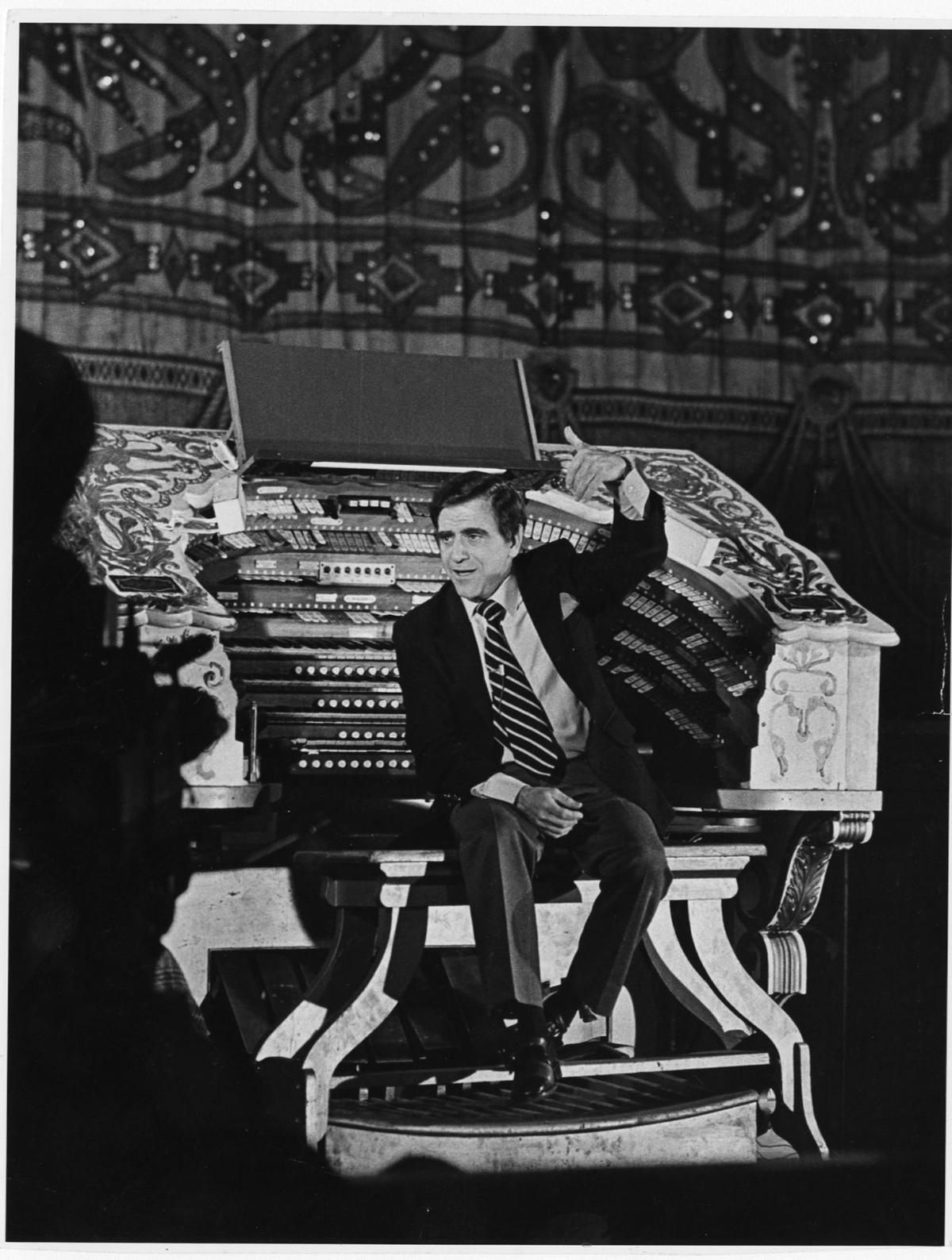 Organist Stan Kann prepares in December 1981 to fire up the Fox Theatre's old Wurlitzer organ, which he played for the theater beginning in the 1950s. It could be lowered into the floor when not needed. Kann died in 2008. (Post-Dispatch photo)