Texans vs. Lions: Follow the latest scores and update from Thanksgiving day football

Better roads for bicyclists, pedestrians the goal of bill OK'd in St. Louis County
0 comments
Share this
{{featured_button_text}}
1 of 3 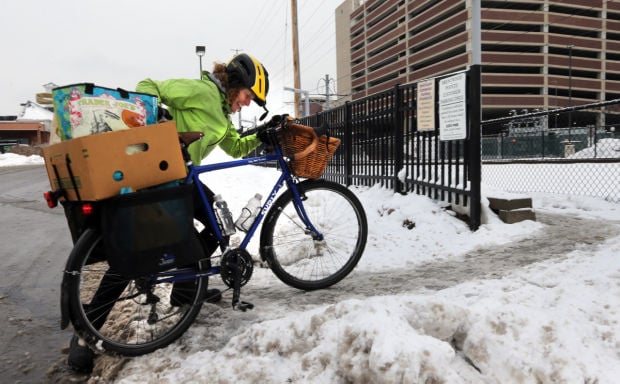 Karen Karabell hoists her grocery-laden bike to the Brentwood Metrolink stop, heading home to the Central West End after running errands in Clayton and Brentwood on Jan. 9, 2014. Photo by Robert Cohen, rcohen@post-dispatch.com 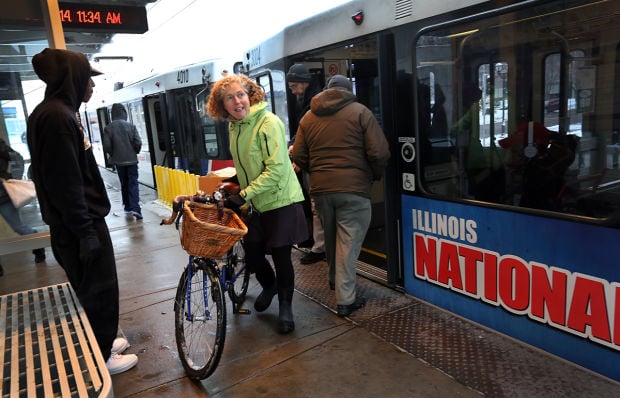 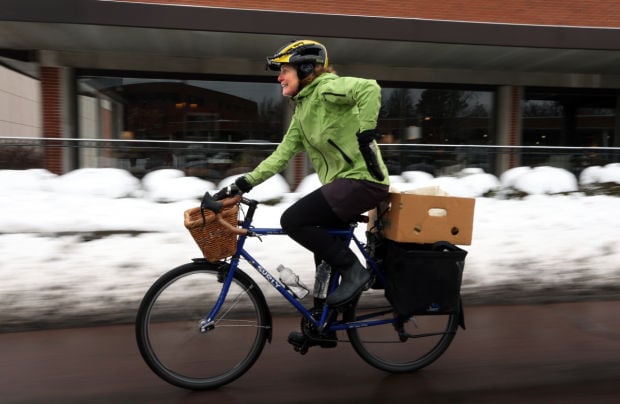 Karen Karabell makes a hand signal indicating a stop while riding on Brentwood Boulevard en route to a Trader Joe's on Jan. 9, 2014. Karabell rode Metrolink from her home in the Central West End to the Clayton stop and used her bike the rest of the way. Photo by Robert Cohen, rcohen@post-dispatch.com

CLAYTON • More than two months of polite but contentious debate drew to an end Tuesday evening with a near-unanimous vote by the St. Louis County Council to adopt a Complete Streets policy that will eventually make it easier to bicycle and walk along county roads.

The vote, 6-0 with one abstention, carries the potential to alter the transportation landscape in St. Louis County and across the region.

“I do believe the future dictates that we become more friendly to bicycling and walking,” said Councilwoman Kathleen Kelly Burkett, one of the six to cast a vote in favor of the Complete Streets bill.

The measure approved Tuesday represented the third version of legislation meant to align the county with a nationwide movement to improve street access for bicyclists and pedestrians.

In late November the council presented tougher, alternative legislation intended to pressure the highway department to broaden the scope of Complete Streets across the county.

That proposal drew the support of Trailnet, a nonprofit organization that promotes healthier lifestyles, and the ire of highway department officials who saw it forcing the agency to add costly and sometimes unnecessary bike lanes to the county road system.

The objections from the highway department in turn spurred an outcry from a contingent of bicycle commuters and activists who appeared at successive council meetings to argue that bike lanes, contrary to popular belief, pose a safety hazard.

Bill No. 3, a compromise introduced last week by Councilman Pat Dolan, appeased some and displeased others.

“It’s obviously weaker than (the second bill), but it’s a step in the right direction,” said Rhonda Smythe, the Trailnet policy and advocacy manager. “It lays out a different direction for the county than what we have now.”

Highway department spokesman David Wrone praised the adopted legislation for its “greater flexibility to ensure that financial constraints and accepted engineering principles are acknowledged, critical factors in the process.”

Critics made on Tuesday a final and ultimately unsuccessful plea for the council to reject the Complete Streets policy.

Cycling instructor Karen Karabell, among the opponents who has marched before the council week in and week out, expressed fear that Complete Streets would line the pockets of consultants and other beneficiaries of what she labeled the “bicycle industrial complex” — “a lucrative new industry (that) has developed around advising municipalities (how) to create and install on-road facilities for bicyclists.”

Another critic, bicycle commuter Susan Herzberg, related how she’d been struck by a car while riding along Manchester Road in a dedicated bike lane.

“Cars don’t know you are there. They don’t know how to deal with bike lanes,” Herzberg told the council.

“It gives the illusion that it’s a safer place to be. But it’s not. The safest place is to (ride) with traffic.”

The points made against Complete Streets did not fall on deaf ears. But ultimately the council decided in favor of a bill that members emphasized would require the county to take cost and other factors into consideration before moving ahead with Complete Streets projects.

Councilwoman Colleen Wasinger noted that the policy, as written, dictated that the access for bikes and pedestrians be “considered, not mandated” during future road improvements.

“I don’t foresee runaway expenditures with this bill,” Quinn said.

EDITOR'S NOTE: An earlier version of this story gave an incorrect vote total. This version has been corrected.

Complete Streets is a nationwide effort to improve bicycle and pedestrian access along vehicular roadways.

• Complete Streets calls for the installation of bicycle lanes (often through the re-striping of existing thoroughfares), sidewalks and curb ramps.

• Complete Streets projects in St. Louis County are expected to unfold over 20 years.

• The St. Louis County upgrades will be funded in part by a 3/16th of a cent sales tax approved by voters in 2013.

A vision for a connected region

Let's offer residents a variety of ways to move around our area and feel safe.

Future focus may have to be on maintenance, without expansion.

Dooley suggested county workers donate 1% of their pay to campaign, his office confirms

But they say it wasn't a requirement.

The needs of pedestrians, cyclists, wheelchair users and public transit patrons must now be considered in transportation development projects.

Baxter Road between Clarkson and Wild Horse Creek roads is about to be striped to add a bike lane in each direction, says the St. Louis County Department of Transportation.

Council responds to critics by re-evaluating plan to make roadways better for bikers and pedestrians.

CLAYTON • Advocates for more bike-friendly and pedestrian-friendly St. Louis County roads are urging the County Council to pass a comprehensiv…

Karen Karabell hoists her grocery-laden bike to the Brentwood Metrolink stop, heading home to the Central West End after running errands in Clayton and Brentwood on Jan. 9, 2014. Photo by Robert Cohen, rcohen@post-dispatch.com

Karen Karabell makes a hand signal indicating a stop while riding on Brentwood Boulevard en route to a Trader Joe's on Jan. 9, 2014. Karabell rode Metrolink from her home in the Central West End to the Clayton stop and used her bike the rest of the way. Photo by Robert Cohen, rcohen@post-dispatch.com