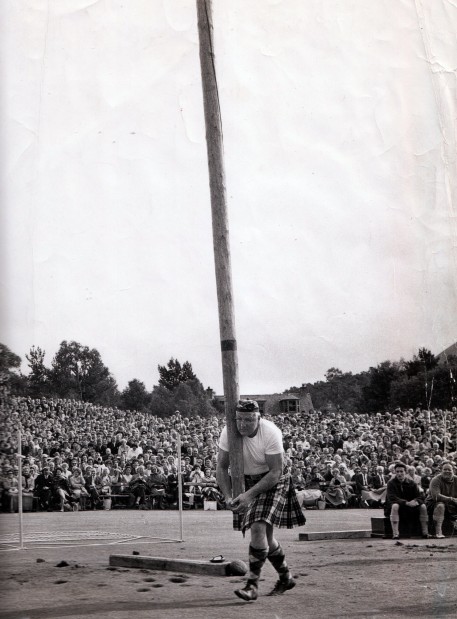 Bill Bangert competes in the caber- toss in the Royal Highland Games in Braemar, Scotland in 1972. HANDOUT 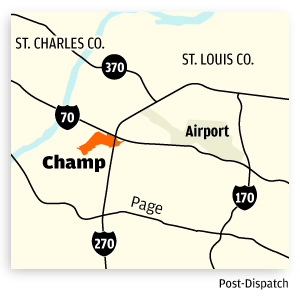 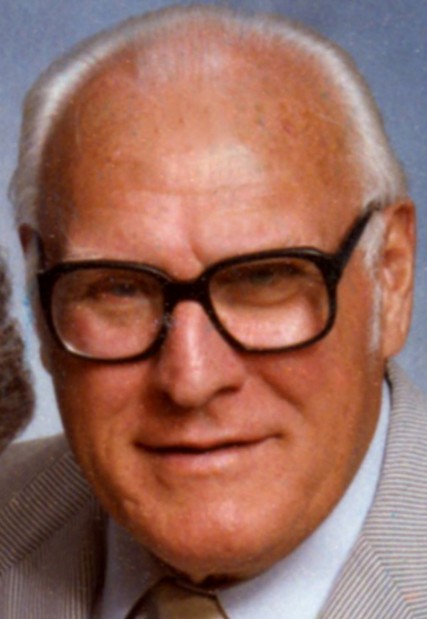 Input July 14, 2011 --- Bill Bangert was a trained opera singer, a world-class athlete, and heir to one of the area's most successful construction company. he became mayor of Berkeley and Champ, which he founded, and called himself the "world's strongest mayor." For Mr. Bangert's obituary story. Handout photo

Bill Bangert called himself "The world's strongest mayor," and that was no idle boast. He was a champion strongman who won track and field awards well into his 70s.

But despite his considerable determination, he couldn't produce the money or resources to build his dream: a domed stadium with at least 100,000 seats to host national track meets and perhaps even the Olympics.

Today, Champ is still a field of dreams: a village with a population of 12, more or less, situated between Maryland Heights and Bridgeton. The exact population isn't known because Champ's officials weren't answering the village's phone this week.

Bangert was a talented baritone who considered a career as an opera singer. At 6 feet, 5 inches and 265 pounds, he also had an offer to play professional football.

And if that weren't enough, he was an engineer whose family owned Bangert Brothers, then one of the two largest construction companies in the metropolitan area.

Bangert died Tuesday (July 12, 2011) at the home of a daughter in Marthasville in Warren County. He was 87 and was diagnosed last year with Parkinson's disease, his family said Thursday.

His careers included public service and two stints as mayor of Berkeley, where he grew up.

In his senior year at Berkeley High School, he gained fame as a St. Louis Golden Gloves champion. His family has photos of him with Rocky Marciano, Joe Louis and other boxing greats.

At the University of Missouri he excelled at track and field and won the NCAA discus throw in 1944 and 1945.

He attended Purdue University on a glee club scholarship and then had a successful audition with the New York Metropolitan Opera. In 1946, he signed with the Brooklyn Dodgers of the All-America Football Conference.

He still was unsure what career path to follow.

At age 28, he went blind, the result of hemorrhages in the rear of both eyes that led to detached retinas. He was still blind in 1952 when he participated in the National AAU shot put championship at Madison Square Garden.

Bangert had the means to find good medical care. He and a twin were the second-youngest of 11 children in the family that owned Bangert Brothers. The construction company began in 1917 and built many of the area's highways. (It is now part of Millstone Bangert Inc.)

Bangert went to area doctors, a famous doctor on the east coast and experts at the Mayo Clinic. All said his blindness was hopeless. One suggested he get a guide dog.

Then he found Dr. W. Howard Lewin, a young ophthalmologist in St. Louis and a former Navy doctor. Looking into Bangert's eyes, Lewin had the idea of performing oxygen therapy, something he says had never been tried before on eyes. Lewin and another doctor followed the therapy with surgery.

"And he regained the sight in one eye" but remained blind in the other, Lewin recalled Thursday. "And he could see until the time of his death."

In 1954, Bangert was a second-term mayor of Berkeley and contemplating a run for Congress when he received a threatening note. He told police that his car was struck by a bullet that shattered a front window, leaving glass splinters in his left eye.

Fortunately, he added, that was his blind eye. No arrests were ever made.

After that, Bangert decided on his life's direction, and it was not in the family construction business. In 1958, he started his own road business for a while and then embarked on the road to Champ.

He bought land near where the Verizon Wireless Amphitheater (formerly Riverport) now sits. He incorporated a village, called it Champ, and he, his wife and five daughters moved there.

Bangert was the mayor. To back up his claim of being the strongest mayor in the world, he made a bet with the lord mayor of Aberdeen, Scotland, that he could carry the famous Dinnie Stones across a 17-foot bridge and back again.

The two stones, with metal rings for handles, weighed a total of 778 pounds. Bangert succeeded, the first time that had been accomplished since 1851.

The Bangerts were among Champ's few residents, and that was all right with him. His idea was to keep the population low, attract industry and use the proceeds to build his domed stadium and a massive shopping center.

That was about the time the baseball Cardinals were considering whether to build the first Busch Stadium downtown. Bangert ran into a storm of opposition from downtown civic leaders who feared that a stadium in the county would lead to a collapse of downtown's commercial, sports and cultural attractions.

The business interests got help from state Attorney General Thomas Eagleton. Bangert ended up fighting a decade of court battles. His dome project collapsed when the governor vetoed Bangert's efforts to issue bonds.

By then Bangert had piled up debts of $3.5 million. He filed for bankruptcy and moved to California, where he and his wife, Rosemary, managed commercial properties.

They lived for 20 years in the shadow of another grand project, one that had succeeded: Disneyland. They returned to Missouri in 1997.

Bangert's answer to critics who said he had been 30 years ahead of his time was that they might have been right.

He noted that an amphitheater now sits near the spot where he planned to build his stadium and that nearby is where Interstates 70 and 270 now intersect.

In a 2001 interview with the Riverfront Times, he said that, "if they'd left me alone, it would've taken off like a house on fire!"

Visitation will be at 2 p.m. Sunday at Immanuel United Church of Christ, 221 Church Street, Ferguson, followed by a memorial service at 3 p.m. The body will be cremated.

Bill Bangert competes in the caber- toss in the Royal Highland Games in Braemar, Scotland in 1972. HANDOUT

Input July 14, 2011 --- Bill Bangert was a trained opera singer, a world-class athlete, and heir to one of the area's most successful construction company. he became mayor of Berkeley and Champ, which he founded, and called himself the "world's strongest mayor." For Mr. Bangert's obituary story. Handout photo