Become a Member
Read Today's E-edition
Share This
Meet the wildlife wranglers who spend their day scaring birds away from the airport in St. Louis
0 comments
Share this 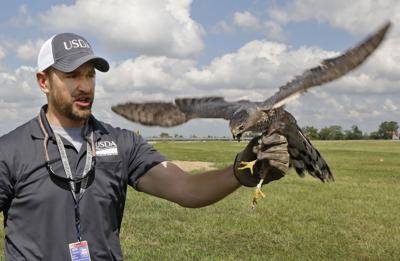 ST. LOUIS COUNTY • Alec Sonnek points to a specimen in a plastic bag on his desk near St. Louis Lambert International Airport.

Snarge n. /snärj/: The (often unpleasant) remains of a bird after it has been struck by an airplane — and an important element of Sonnek’s unusual job as one of two U.S. Department of Agriculture biologists working full time at Lambert.

The airport biologists here have one mission: Preventing run-ins between birds and planes that can result in safety risks to passengers, costly damage for airlines and, yes, snarge.

On an average day, Sonnek and his partner, Paul Flicek, may have to capture a great horned owl, analyze the remains of past bird strikes or scare a flock of starlings off the airfield with a propane cannon that sounds a bit like a gunshot.

In Sonnek’s office sits a reminder: A fan blade from an American Airlines jet that was twisted out of shape in one of the costliest bird strikes at Lambert. In July 2009, a red-tailed hawk flew into the plane’s engine during take off, filling the cabin with the smell of burned bird, according to records from the Federal Aviation Administration.

The plane came in safely for an emergency landing, but the less-than-5-pound bird caused $393,500 in damage.

Few bird strikes are that costly, though they are common.

From 2005 through 2017, 57 strikes were reported at Lambert on average each year. Of those, 11 caused “substantial damage” totaling at least $1.2 million combined, according to FAA data.

There are also safety concerns. There have been more than 280 injuries related to wildlife strikes on U.S. civil aircraft since 1990. The most high-profile story, the “Miracle on the Hudson,” raised awareness of the risks in 2009 when a US Airways flight struck a flock of geese and lost all engine power. Capt. Chesley “Sully” Sullenberger land ed the damaged plane in the Hudson River, and the Federal Aviation Administration put a new focus on the work USDA biologists do at airports across the country.

“You’re never going to be able to stop strikes completely,” said Lambert biologist Sonnek. “But we do everything we can think of to make them less common.”

The snarge on Sonnek’s desk is there for a good reason: It’s about to be sent to a kind of CSI unit for birds.

A forensics team at the Smithsonian Feather Identification Lab in Washington will identify the species even though, like most snarge, the sample isn’t much more than a smudge of DNA wiped off a plane with a paper towel.

If there’s more of the bird left, the Smithsonian team can do an autopsy to identify what it has eaten. That kind of information offers important clues for airport biologists such as Sonnek.

Through the lab, the biologists discovered American kestrels were one of the most-struck birds at Lambert. The small falcons were attracted to insects including grasshoppers, so Sonnek’s team had the airport’s grass kept longer to reduce kestrels’ access to the insects when the birds are abundant.

There have been other adaptations over the years. The biologists had a Boeing office near the airport remove a standing water feature that was attracting geese. They put netting under an overpass by the terminal where pigeons liked to sit. And they weigh in on all construction plans at two nearby Bridgeton landfills because uncovering waste could attract swarms of birds into the flight path.

But despite all these efforts, there will always be birds at the airport, Sonnek said.

Species like the mourning dove, the bird most often struck at Lambert, like to roost on the warm pavement of the runway and, as Sonnek puts it diplomatically, “they’re not the smartest bird out there.” Other birds like airports for the wide open spaces or the high towers where they can perch and look for prey.

So, airport biologists have to get creative to keep the birds away.

On a recent afternoon, Sonnek took a ride in his airport vehicle, officially called USDA-1, to demonstrate some tricks of the bird-scaring trade around the airfield.

There’s the propane cannon that can shoot off a gunshot sound on a timer. A starter pistol can propel a red firecracker into the sky. There’s a booming speaker that plays the distress sounds of common bird species.

“Yeah, it’s pretty loud,” Lambert biologist Flicek said as he demonstrated the speaker, which creates a sound like a hoard of about 1,000 angry birds.

In more public areas near the terminals, the biologists try not to scare passengers too much by using more rudimentary tools — two sticks they smack together to get birds to go away.

Sonnek is sometimes tasked with clapping the sticks together near a cluster of trees outside the sliding doors of one terminal as confused people with rolling suitcases walk by. The little grove of trees is set to be thinned soon to prevent attracting more birds.

That work of scaring birds can be frustrating, Sonnek said. They often fly off only to land 50 feet away.

“You have to really scare them to make them leave and not want to come back,” he said.

Some airports use dogs to scare geese away from water or falconry to keep smaller birds away. Those aren’t needed at Lambert now, but the team is always switching up its approach.

“There’s no magic bullet,” said Sonnek. “Why do you think you see owl decoys covered in bird poop? Birds learn. You need to have a lot of different tactics so they don’t habituate.”

On a recent afternoon, Sonnek pulled a striking great horned owl and two angry Cooper’s hawks out of a wooden box on the airfield, an example of the dozens of live birds the biologists handle every month through the USDA Raptor Relocation Program.

The biologists set up traps all around the airport. When birds are caught, they attach a tracking bracelet on their leg and move them to wildlife areas more than 70 miles away .

It can be tricky navigating the birds’ angry flapping and sharp talons.

“These ones out of all the birds have the most attitude …” Sonnek said holding a small, screeching Cooper’s hawk. “I think these ones have a bit of a size complex.”

The biologists stick the birds in a tube to calm them while they put on the metal tracking band.

The tracking numbers show some do come back, including one of the hawks caught on this day. It was banded at the airport the year before. One hawk returned to the airport 10 years later, Sonnek said.

“That is a pretty successful bird,” he said. “A lot of times they don’t live longer than a year. It’s rough out there.”

In Sonnek’s view, this capture and release is doing a service for airlines and passengers at Lambert to avoid strikes, but it’s also to benefit the birds.

It’s the latest effort by Republicans to put roll back the expansion approved by voters in 2020.

It was the 12th record-setting day for hospitalizations this year. One apparent positive note: a dip in hospital admissions from 216 to 145.

Expect snow in St. Louis this weekend. The early outlook says a few inches are possible

With temperatures set to drop below freezing, light rain is expected to quickly transition to snow on Friday.

Most of the ‘paper-only’ transactions that caught the government’s attention occurred in 2012 or earlier, outside the statute of limitations.

With new leader, Annie Malone gets back to the basics

The north St. Louis anchor institution is taking a break from serving children in the state foster care system.

Woman killed by tractor-trailer in Foristell

The woman was a pedestrian.

'We've made progress, but there's a lot of unfinished business,' said FeliceSkye Hutchinson, president of the Wellston Community Coalition.

Snowfall totals were on the low end of the forecast for the weekend. 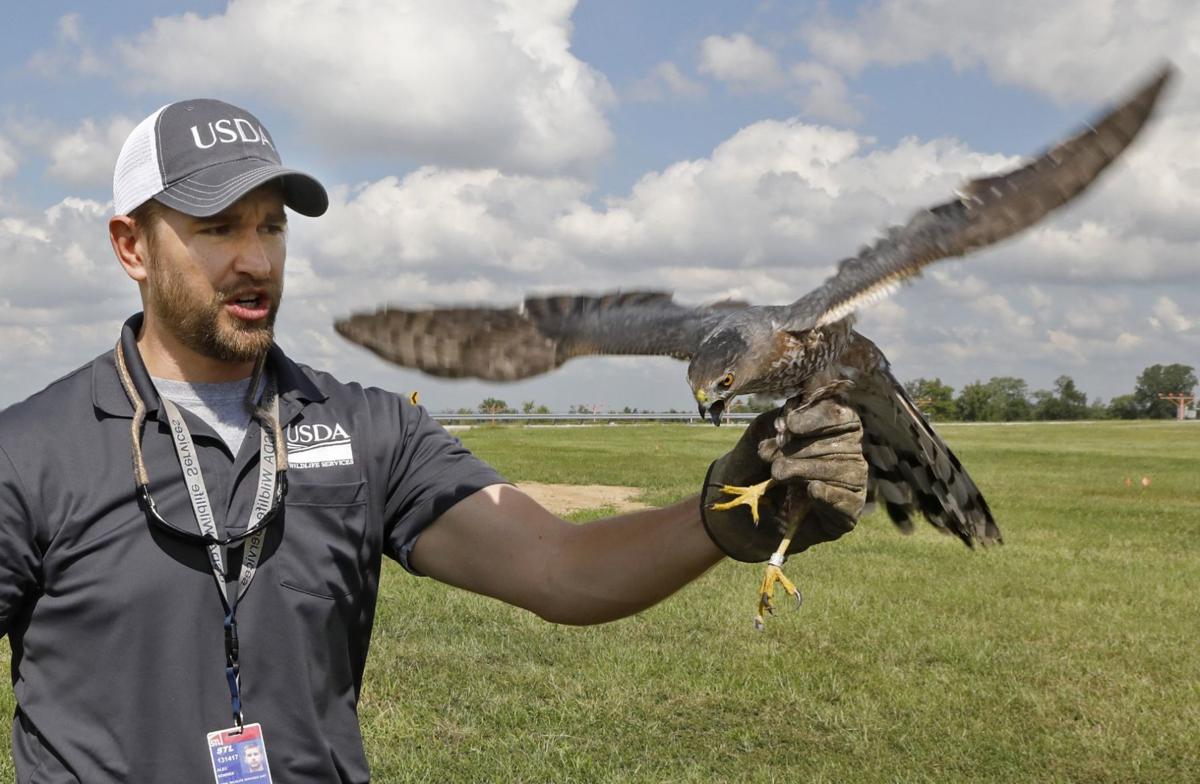 USDA Wildlife Biologist Alec Sonnek examines a cooper's hawk that he had captured earlier in the day on Wednesday, Sept. 12, 2018, at St. Louis Lambert International Airport. He had captured the bird once before and put a band around its leg. The bird had been relocated more than 70 miles away from the airport, but it had returned. Photo by J.B. Forbes, jforbes@post-dispatch.com 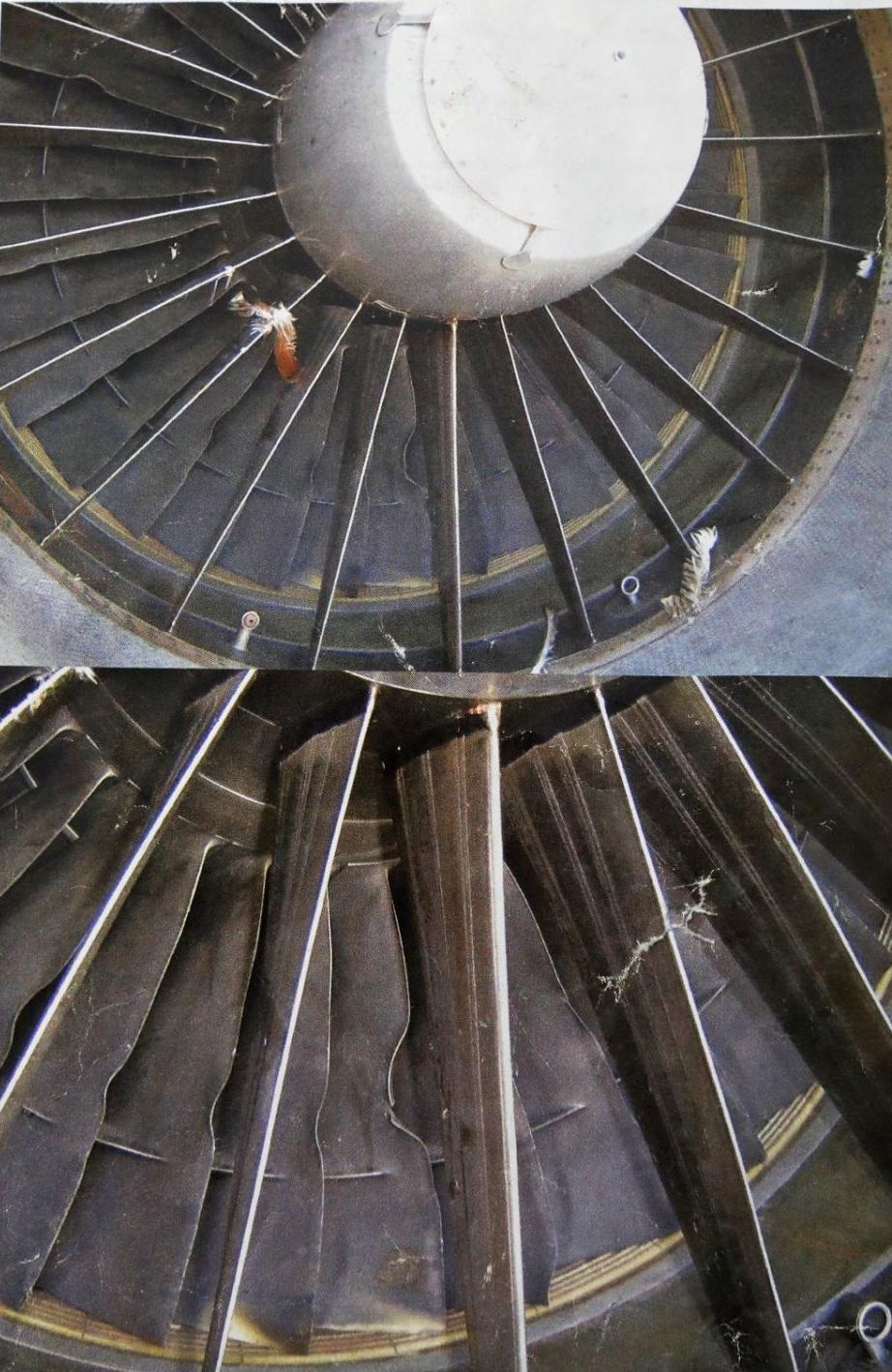 A photo shows the damage that was caused by a red-tailed hawk being sucked into the engine of a passenger jet at St. Louis Lambert International Airport on July 29, 2009. Repairs to the plane cost $393,500. 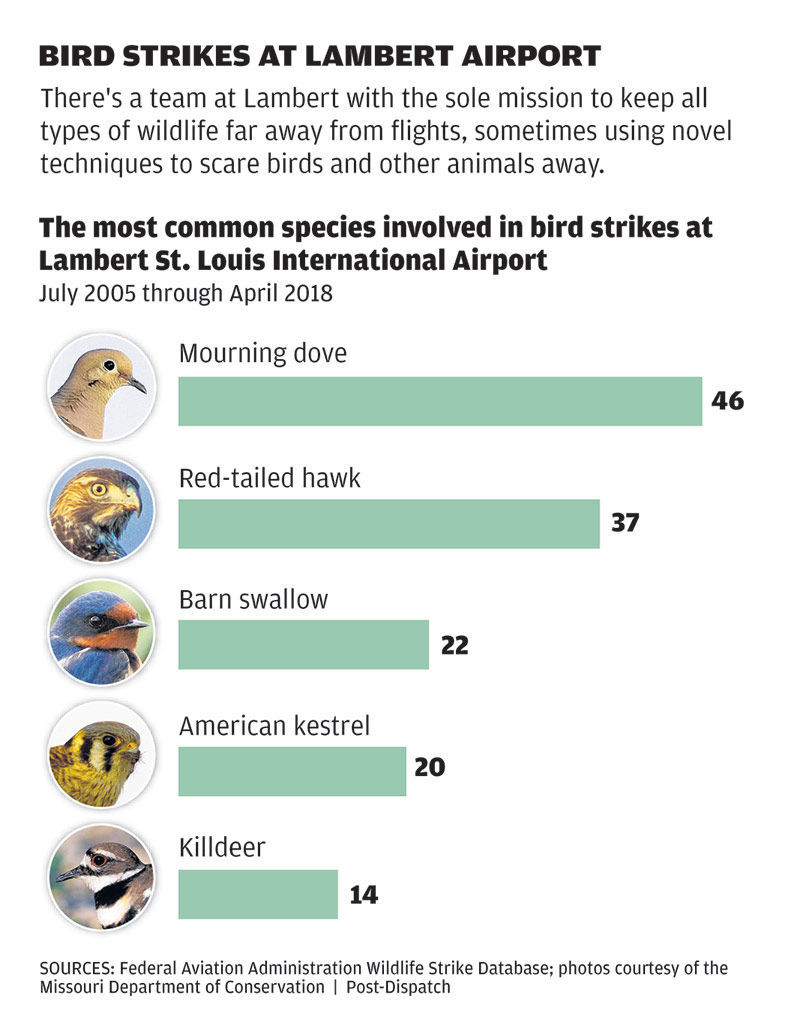