Blitzkrieg on the Riverfront: See what had to be cleared before they built the Arch
0 comments
Share this
{{featured_button_text}}
By Tim O'Neill

ST. LOUIS • On April 11, 1934, lawyers filed incorporation papers for the new Jefferson National Expansion Memorial Association. Its charge was to develop "a suitable and permanent public memorial" to President Thomas Jefferson along the city's dingy riverfront.

Its leader was Luther Ely Smith, who always seemed to be in the middle of noble endeavors. He would guide the riverfront project through Depression and war, a massive land-clearance and a top-flight design competition. He would be praised as the founding father when St. Louis selected as the suitable memorial Eero Saarinen's idea for what would become the Gateway Arch.

Smith did not live to see it built. (It wasn't completed until 1965.) But when Smith died in 1951, a Post-Dispatch editorial honoring him began with this sentence: "Where in all St. Louis was there a better citizen than Luther Ely Smith?"

Or as energetic. Born in the Chicago suburb of Downers Grove, Smith attended Washington University School of Law and married SaLees Kennard, daughter of a prominent rug manufacturer here. After service in the Spanish-American War, he became a lawyer downtown and took his first steps in good citizenship.

In 1900, he and Dwight Davis, a future city parks commissioner, led a campaign to build the first playgrounds in St. Louis. They wheedled donations of land, materials and union labor, and made places for kids to play.

He organized the Pageant and Masque in 1914, a celebration of St. Louis' 150th anniversary that filled Forest Park with eager crowds. He helped organize the City Plan Commission in 1916 and promoted completion of the Municipal (now MacArthur) Bridge.

In 1915, St. Louis voters turned down his idea for a grand mall along Market Street from downtown to Grand Boulevard. But nothing stopped him from trying.

"There is always more work to be done," he said.

Thirty years of talk about riverfront renewal gathered steam during the Depression as a way to create jobs. Smith is the one who suggested making it a memorial to westward expansion. He would lead the Memorial Association for nearly four decades.

Along the way, he still found time to help create the system of appointing St. Louis judges in 1940 and the city civil service system two years later. When Saarinen's arch design was chosen in 1948, Smith was his unassuming self. "You have made this possible," he told the gathering.

Smith died on April 2, 1951, at age 77. He was stricken while walking from his Central West End home to catch a bus downtown.

In 1970, a grateful city dedicated the small park in front of the Old Courthouse in his memory. Restful and shaded, it offers one of the best views in town.

A look back: Making way for the Arch

The five teams still in the competition to reshape the Arch grounds took turns meeting with local officials.

A Look Back • The Gateway Arch 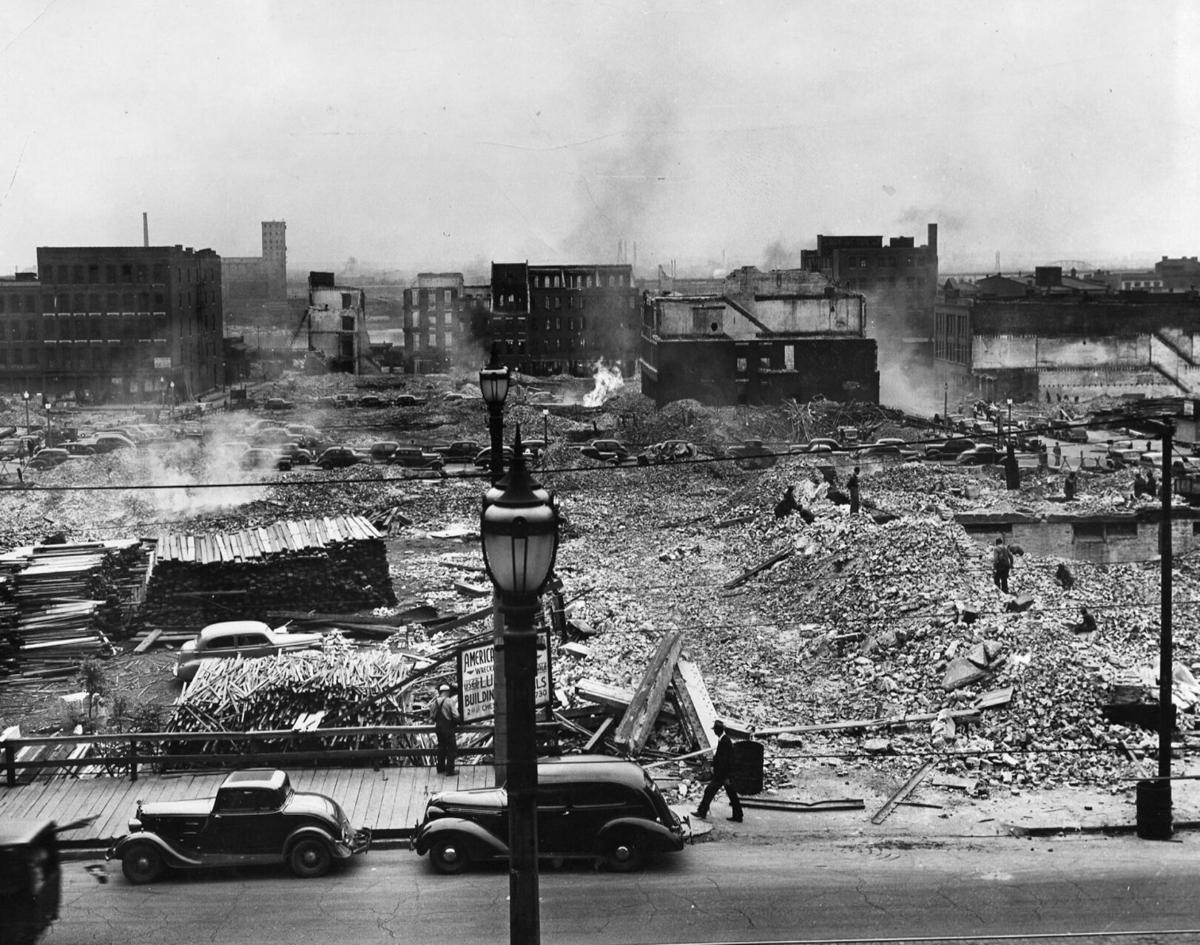 Demolition as of May 24, 1940, as seen from the east door of the Old Courthouse. The headline over the photograph says "Blitzkrieg on the Riverfront," a reference to the widening war in Europe. Blitzkrieg, or "lightning war," was the term for the hard-hitting German military offenses that were rolling up victories in 1940. (Post-Dispatch) 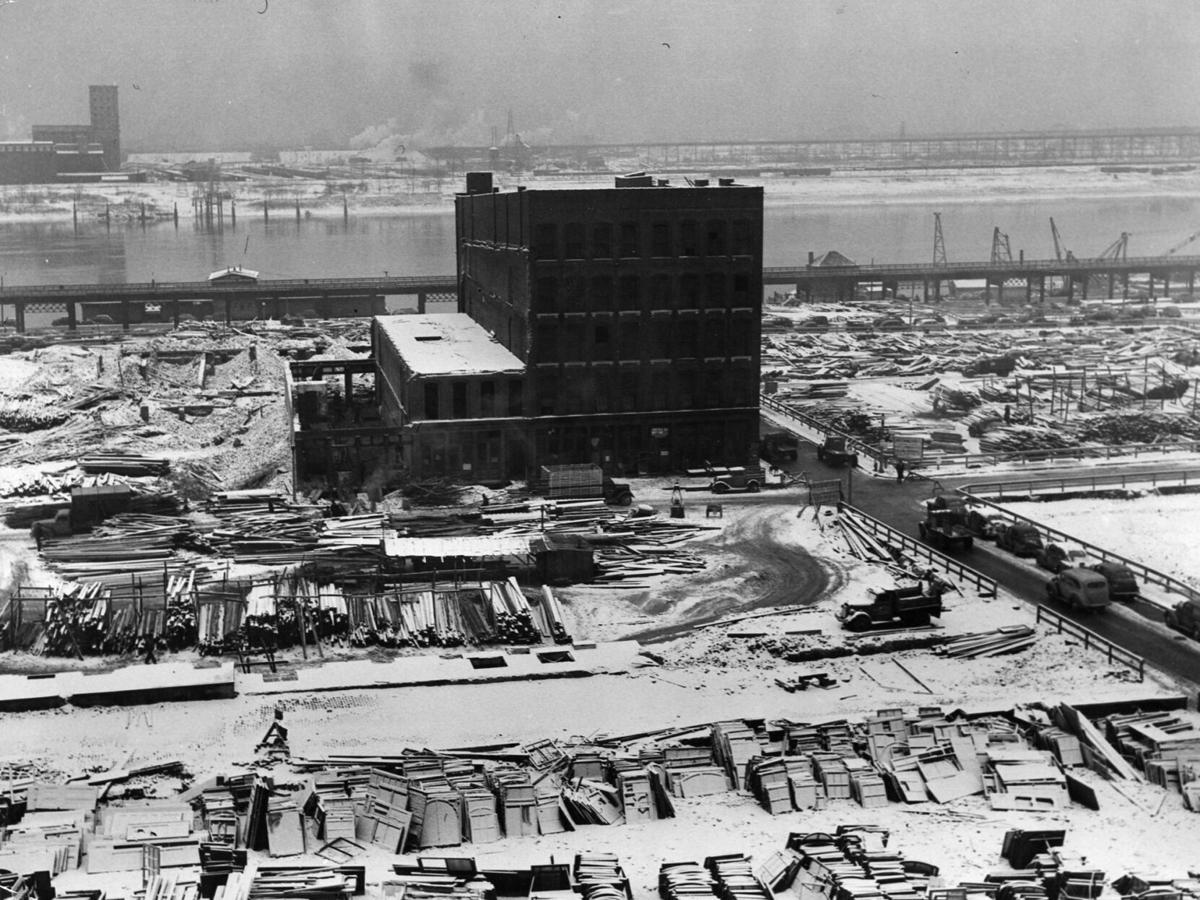 One of the last buildings slated for destruction survives amidst snowfall in February 1941, shortly before it was taken down. The building at 102 North Second Street, a former grocery warehouse, was used to store items salvaged during the demolition. In the foreground, nearly covered with snow, are stacks of wood-framed windows. (Post-Dispatch)