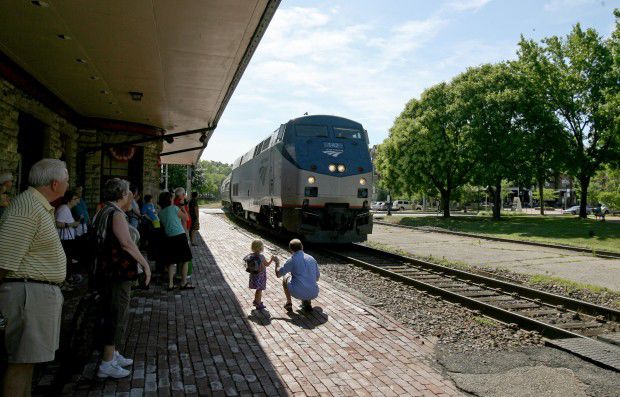 An Amtrak train rolls into the Kirkwood station on its scheduled run to Kansas City on Saturday, June 23, 2012. Photo by David Carson, dcarson@post-dispatch.com 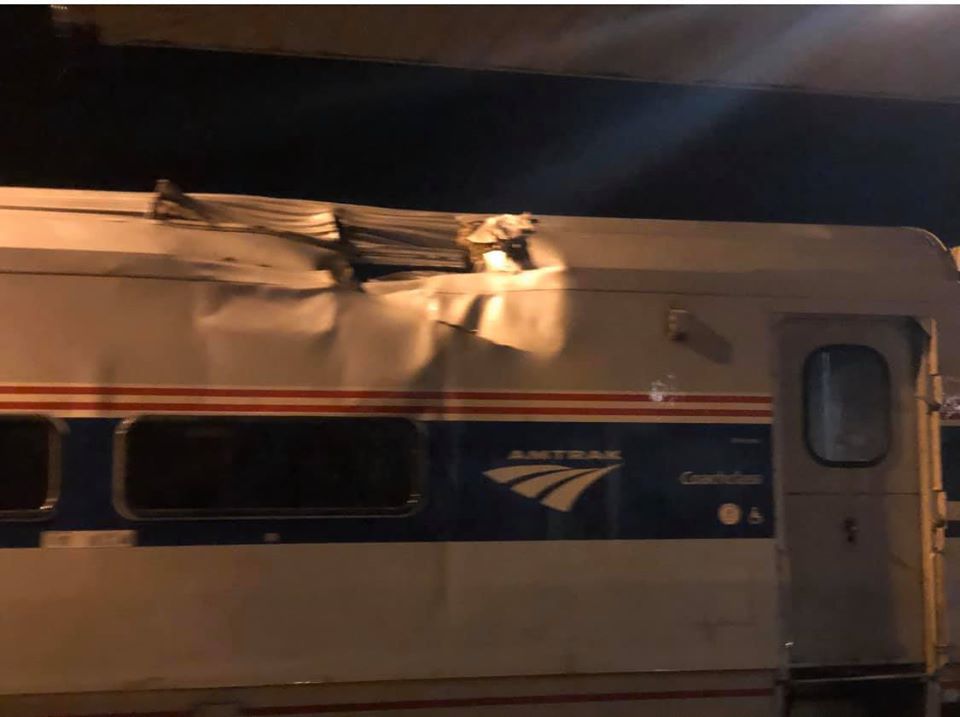 A photo of the damaged train, posted on the Hermann Police Department's Facebook page.

One of the 145 passengers was treated for smoke inhalation, said Jason Abrams, a New York-based spokesman for Amtrak. No other injuries were reported.

The Missouri River Runner follows a route that has numerous bluffs and other rugged terrain. The size of the boulder was unknown but it was too big to have been thrown, Abrams said.

The No. 313 train, which departed St. Louis around 4 p.m., was struck shortly before 6 p.m., between Washington and Hermann, he said. One train car was hit in the roof, right above a restroom for people with disabilities and an electrical cabinet.

“It shook the car,” said Rita Holmes-Bobo, a passenger from Kansas City who was sitting nearby. “It hit very hard.”

Still, the train moved on to Hermann, where it was inspected and cleared to leave. But the electrical cabinet soon began smoking again, Abrams said. The train stopped in tiny Morrison, just shy of Jefferson City, and was deemed unsafe to continue onward with passengers.

At that point, an EMS crew tended to a passenger complaining about smoke inhalation, Abrams said. He wasn’t briefed on an update of the person’s condition.

The train was towed back to St. Louis and passengers were returned to their original stations, he said. Accommodations and alternative transportation were offered to those who requested them.Holmes-Bobo was on the train because her flight home from St. Louis was canceled Friday. She said the boulder incident was poorly handled.

“Every mode of transportation is going to have issues, but how you treat the passengers and communicate with them was lacking with Amtrak,” she said.

At one point passengers were told buses would pick them up in Jefferson City. Then it was supposed to be in Hermann. She and many others from the damaged car ended up standing all the way back to St. Louis, packed into a different car on the same train.

She said they arrived in St. Louis at 12:30 a.m. Saturday. She got a hotel, then rented a car. She made it home to Kansas City just after lunch.

The area could see wind gusts up to 80 mph and hail the size of a golf ball, according to the National Weather Service.

The 25-year-old victim was identified as Justin Beger.

Chesterfield plans to fix washed-out trails in Eberwein Park in stages through 2024.

The University City task force on renaming streets and parks has researched more than 200 names and divided them into three categories.

Read the questions and the Road Crew's answers on high construction, potholes and more

Ask the Road Crew, experts from the Missouri Department of Transportation, St. Louis and St. Charles counties and St. Louis City, your questio…

An Amtrak train rolls into the Kirkwood station on its scheduled run to Kansas City on Saturday, June 23, 2012. Photo by David Carson, dcarson@post-dispatch.com

A photo of the damaged train, posted on the Hermann Police Department's Facebook page.