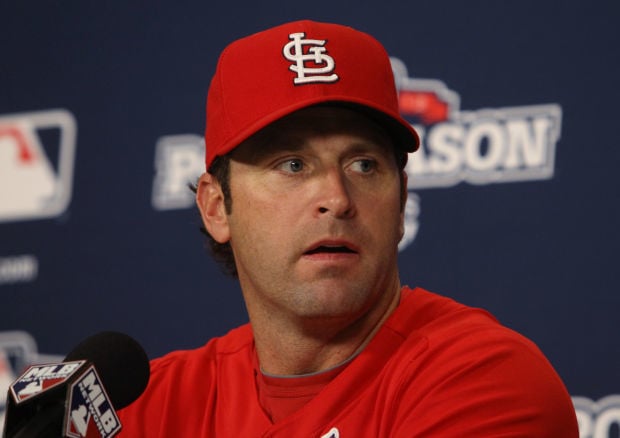 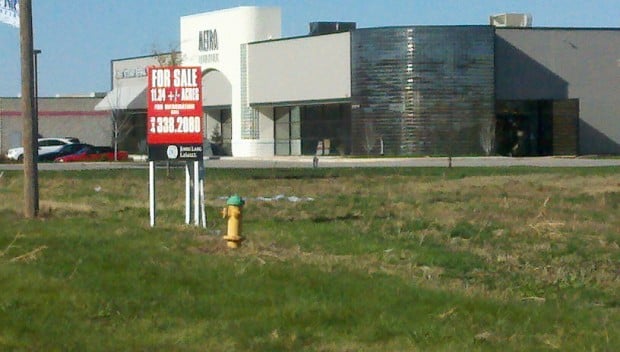 Mike Matheny's failed commercial real estate venture at 17401 North Outer Forty in Chesterfield, where there was a new owner and two tenants, in November 2011. Adjoining property that was part of the deal remained undeveloped. Photo by Jennifer Mann, jmann@post-dispatch.com 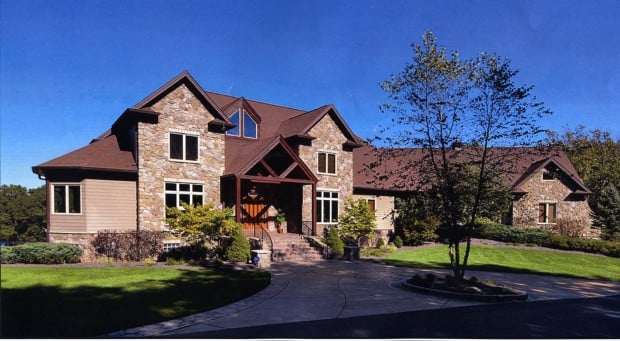 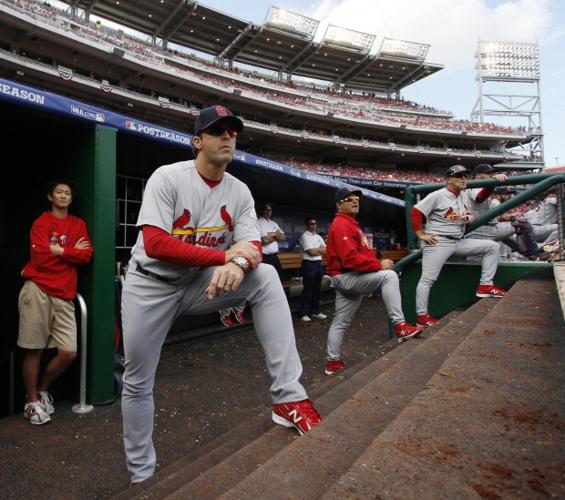 Cardinals manager Mike Matheny watches play from the dugout during Game 3 of the National League Division Series between the St. Louis Cardinals and the Washington Nationals on Wednesday, Oct. 10, 2012, at Nationals Park in Washington, D.C. Photo by Chris Lee, clee@post-dispatch.com 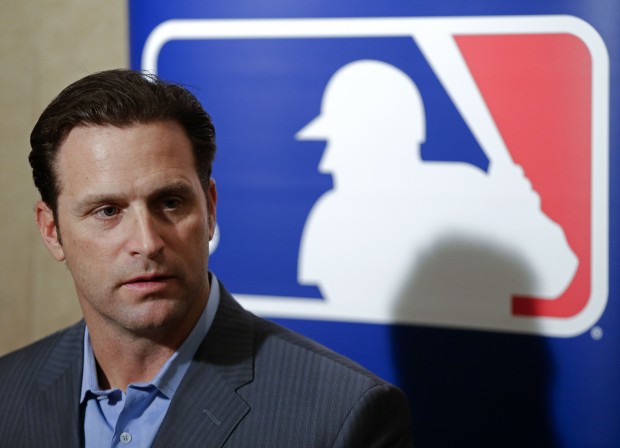 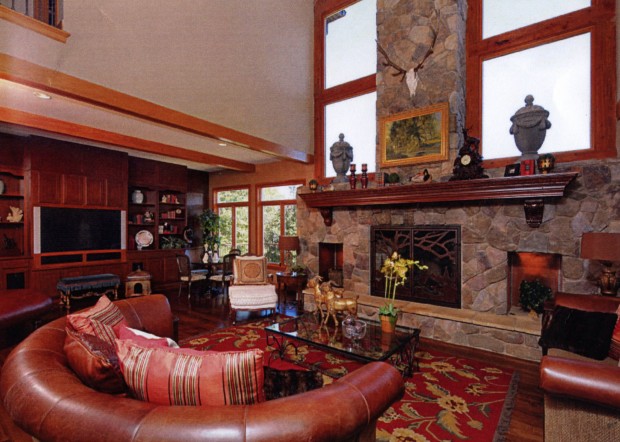 CLAYTON • Cardinals manager Mike Matheny has lost his court battle with a local bank over a failed real estate investment in the Chesterfield Valley. The ruling will cost Matheny millions of dollars — potentially his entire net worth, he said Friday.

Circuit Court Judge Tom DePriest ruled that neither the country’s economic downturn nor the decision by The Business Bank of St. Louis to stop loaning money to Matheny and his wife relieved them of their obligations to repay the loans.

The group had initially sought to develop a stretch near Boone’s Crossing, across Highway 40 from the bustling Chesterfield Commons strip mall.

After the market crashed in 2008, Matheny said Friday, he worked full time for a year to try to develop or sell the lots, with no luck.

“We kept telling ourselves, ‘We’ve got a couple years. A lot can happen in a couple years,’ ” Matheny said Friday from his office at Busch Stadium. “And it was just amazing how quickly those years went.”

The Chesterfield property wasn’t Matheny’s only effort in real estate. He got into it as his playing career — he was a four-time Gold-Glove catcher with the Cardinals and San Francisco Giants — started ramping down.

He purchased 370 acres of farmland in central Illinois with former Cardinal teammates Jason Isringhausen and John Mabry, and 250 acres in Jefferson County with Mabry, according to court records.

He bought a 400-acre farm in West Virginia, his childhood home in Ohio, and interest in a Long Island real estate project, according to the records.

In 2005, Matheny formed MPD Investments with two former St. Louis indoor soccer players, Daryl Doran and Brett Phillips. At first, the partnership was successful. The three bought a block at the WingHaven development in St. Charles and flipped it in six months, Doran told the Post-Dispatch two years ago. According to court records, they sold it for $2.4 million more than their purchase price.

Doran left the partnership to start a gym. Phillips and Matheny used their proceeds to take out $11.8 million in loans and, in 2007, they put together three lots along Highway 40. They included the former U.S. Turf headquarters, at 17485 North Outer 40, and 11 vacant acres adjoining the building.

Plans for the commercial property, however, went south as the real estate bubble crashed.

The loans, first due in 2009, were extended to 2010, according to court records. At one point Matheny and his wife, Kristin, personally guaranteed $4.2 million of the debt, including a $1 million claim on their 11-acre home in suburban Wildwood.

But by the middle of 2010, Matheny said he could no longer afford the payments. In May, citing the “need to protect our family’s interest,” he told the bank he would stop making payments on the loans, according to court records.

In June, the bank sued. In July, it foreclosed on the land, buying the lots for $4.5 million, which it credited to the partnership’s accounts.

Ever since, Matheny and the bank have been arguing in court about how much he should pay. In the meantime, he landed the job as Cardinals manager in November 2011.

Matheny’s attorney argued that the bank breached the contract by refusing to loan Matheny additional money for improvement to the U.S. Turf property. They blamed the “current economic crisis” and argued that the foreclosure price — “substantially less than fair market value” — should be voided, court records show.

The judge, however, found that Matheny’s arguments were invalid. In particular, DePriest said, the Missouri Supreme Court had recently reaffirmed that foreclosures can be voided only when the sale price “shocks the conscience.”

The judge’s ruling, made last week, gives the bank 30 days to file a final bill, including interest and court costs, and Matheny 15 days to respond.

DePriest set a hearing for March 13 to hear any objections to the final judgment amount. Matheny said he hoped the two sides could find a resolution by that date

He also said he wouldn’t appeal the ruling. He wants the issue behind him.

Matheny’s salary for the coming season is $750,000, but he said he might need all of his investments and savings to pay off the bank debt.

Cards move toward deal with Motte; difference between club's offer and third baseman's figure is 56 percent.

Financial trials hurt Matheny, but also brought him back to Cardinals

Man who had it all has to come to grips with losing everything.

Agent says lefthander's 'first priority is his health and the Cardinals.'

Rising interest in younger players is reflected in the price of their autographs at Cardinals' Winter Warm-Up.

Mike Matheny's failed commercial real estate venture at 17401 North Outer Forty in Chesterfield, where there was a new owner and two tenants, in November 2011. Adjoining property that was part of the deal remained undeveloped. Photo by Jennifer Mann, jmann@post-dispatch.com

Cardinals manager Mike Matheny watches play from the dugout during Game 3 of the National League Division Series between the St. Louis Cardinals and the Washington Nationals on Wednesday, Oct. 10, 2012, at Nationals Park in Washington, D.C. Photo by Chris Lee, clee@post-dispatch.com