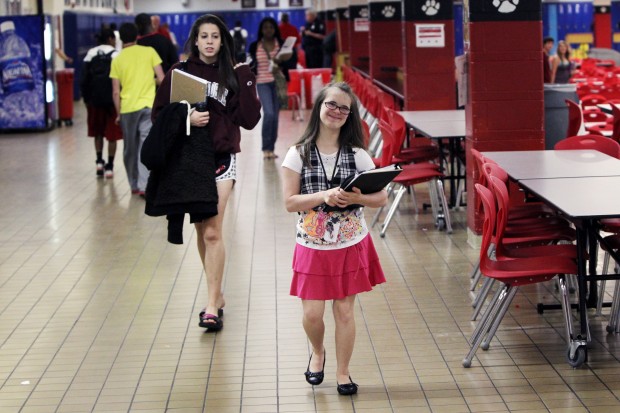 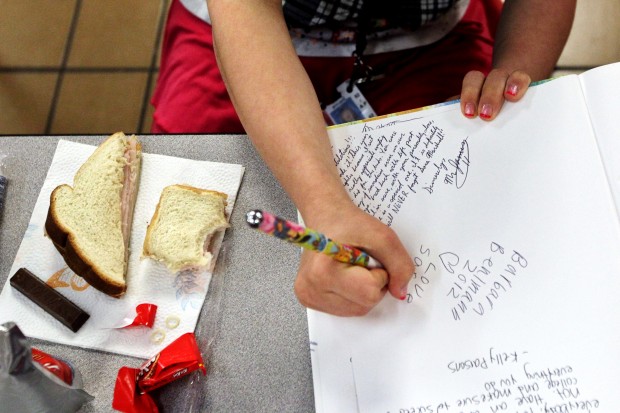 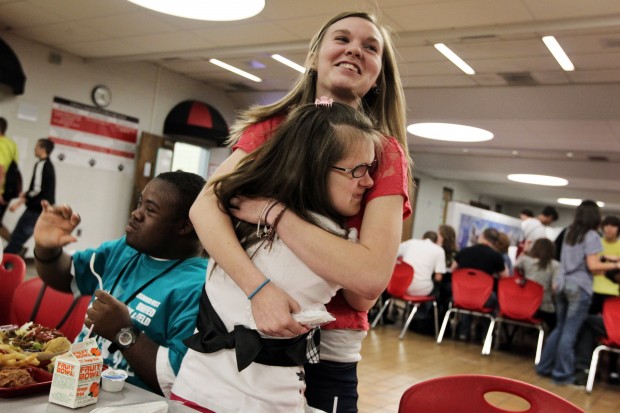 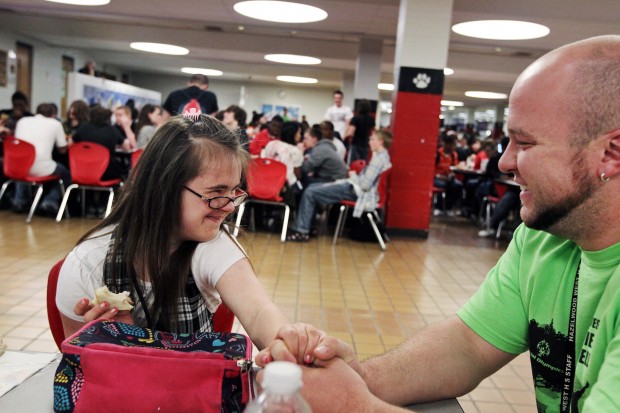 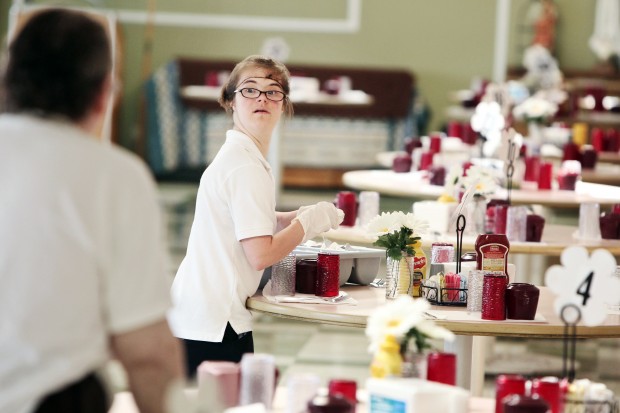 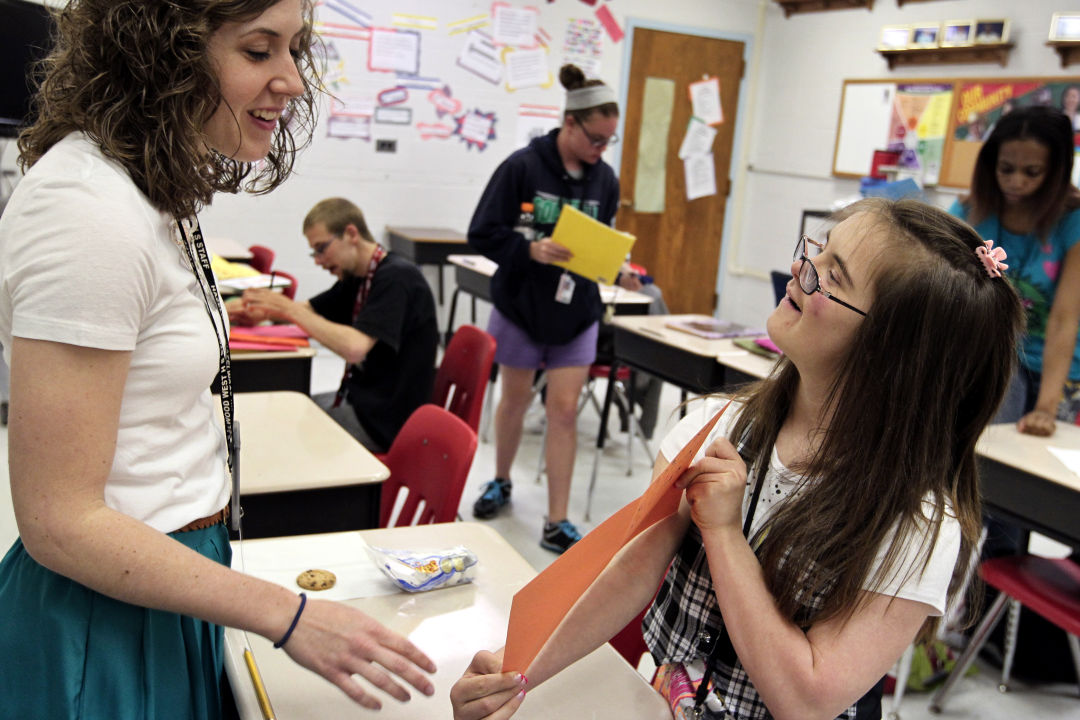 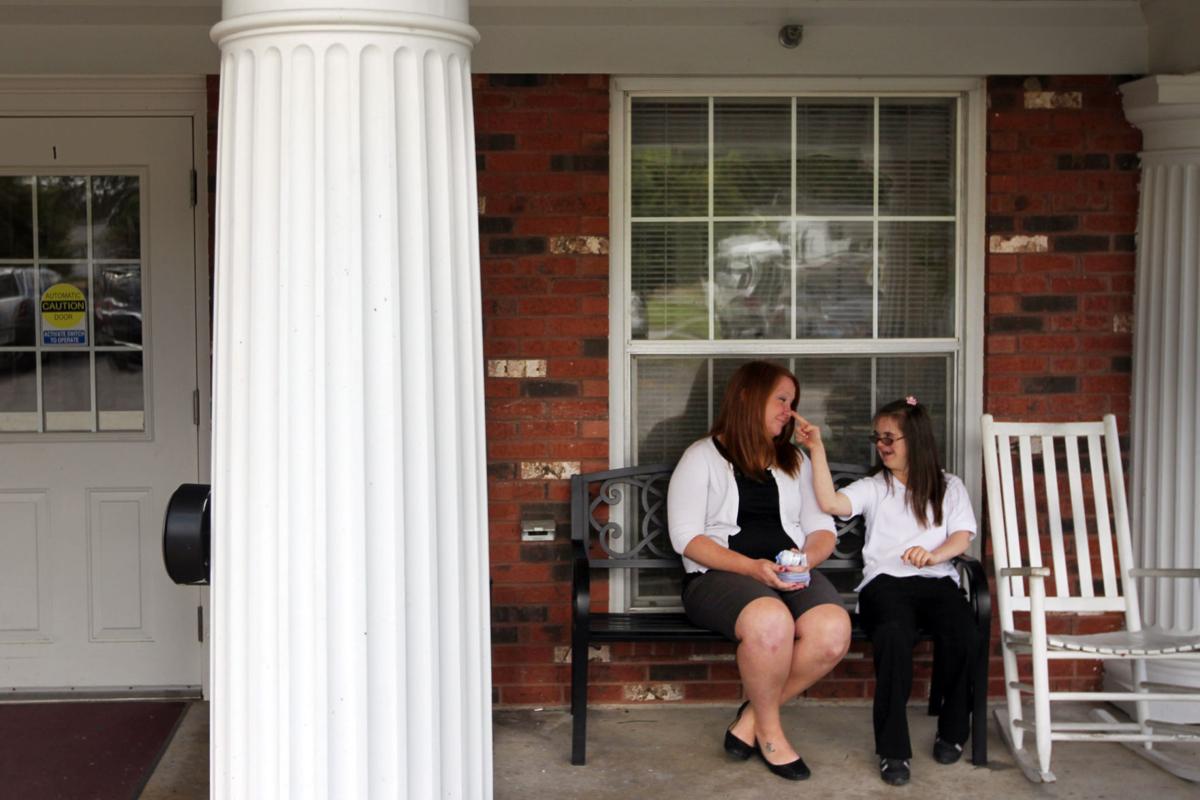 Barbara Behlmann jokes with her teacher Heather Johnson outside the St. Sophia Health & Rehabilitation Center in Florissant on Thursday, May 10, 2012. Photo by Erik M. Lunsford, elunsford@post-dispatch.com

HAZELWOOD • It's yearbook distribution day at Hazelwood West High, and several students are asking the homecoming queen — a cheerleader — to sign their copies.

"Sure!" says Barbara Behlmann, smiling and abandoning her lunch to answer one such request. She settled back in a chair, propped her elbow on one leg as she grabbed a pen and started to write. She finished by drawing a heart.

Lunch ended and students scattered, but senior Sara Marshall stayed behind and sat down at an empty table to sign Barbara's book.

"You're such an amazing person. And you inspire me to do better," she wrote. "I'm so happy to have met you."

Around the high school, as Barbara, 19, gets ready to graduate on Saturday, other students and teachers say they feel the same.

"Unknowingly, Barbara has taught us all that nothing is impossible if you are willing to work for what you want," said Jodi Schutzenhofer, one of her teachers.

Barbara Behlmann was 4 years old when child welfare workers placed her in the home of Gary and Karen Behlmann as a foster child. Her birth parents had neglected not only her basic needs, but the early interventions and therapies needed by children with Down syndrome, say Gary and Karen Behlmann. After losing a child, they adopted Barbara Behlmann shortly after she came to them. She had previously lived in 17 other places, and was malnourished at 22 pounds — "just a tiny feather," Karen Behlmann says — with dark circles under eyes. Doctors put her in the category of "failure to thrive."

The Behlmanns began using sign language with the little girl, who wasn't talking. They took her for evaluations by several specialists in Down syndrome.

Slowly, she began to make progress in her health and development, saying words little by little and adjusting to balanced meals.

But early on, the Behlmanns decided they would teach their daughter to do more than just survive.

"We never put limits on Barbara. We never said 'You can't do this,' or 'You're not able to do this,'" Karen Behlmann said. "It was whatever she wanted to do, then we were going to do it — whatever it took."

Speech and language therapies, at day care, school and home were constant throughout the rest of her childhood, they say. Chatter with a sister, another girl the Behlmanns adopted, helped too.

Along the way, Barbara's personality became clear — a happy, outgoing girl with no fear.

That's how her fellow cheerleaders at Hazelwood West describe her.

As one of the newbies on the squad, she endured hard work at many hours of practice to learn cheers and stunts in preparation for the first game.

"She caught on quick, though. Barbara is, like, so spirited, and so eager to learn," said Danielle Randall, a junior. "(Before the game) she was making sure her bow was just right. But I don't think she was nervous."

In high school, Barbara had academic goals to meet as part of her special education classes, but she thrived socially, too. Other students got to know her in gym class or one of other general education electives she took with them. Schutzenhofer said Barbara was quick to introduce herself if she didn't know someone or ask a question in class if she didn't understand something.

In the Peer Buddies club, students without educational disabilities got together after school with Barbara and other students with special needs to watch school sports. That's when Barbara really got into cheering on the school's teams, and later officially joined the cheerleading squad.

"I think because Barbara was able to communicate, and she wasn't afraid to do things, kids were more accepting," Karen Behlmann said.

At West, a school of 2,200 students, Barbara is one of the most well-known, people say.

Marshall, also a cheerleader, said that when the cheerleaders raised Barbara up into the air for her first stunt on the squad, everyone cheered for her.

"She felt that, and you could just tell she was on top of the world," Marshall said.

When Barbara's name was announced as homecoming queen was last fall, she began to clap with everyone else, not realizing she was the person who had won, teachers say.

Winning a title that students themselves vote for is an example of the acceptance and progress that's been made in the education of students with special needs, even in the last five to 10 years, said John Cary, superintendent of the Special School District of St. Louis County.

Out of about 24,000 special education students served by the district, most of them now are educated in their home schools, he said. Less than 900 are in buildings specifically for students with special needs.

When students with disabilities are included with their peers, both benefit, Cary said. They get experience with people who are different from themselves, which is what they'll encounter out of school.

"It's been a long progression, and we probably have a long way to go," he said.

The Special School District recently honored Barbara with one of its Rosemary Zander Awards, which recognized 24 students this year for their leadership and accomplishments.

At St. Sophia's nursing home, where Barbara works a few hours a week as part of her job training class, she is attentive to the residents as she serves them beverages, helping them fasten an apron around their necks to protect their clothes from spills.

"Have a good lunch," she said recently to one table of residents as she walked out of the dining room before heading back to school for the day.

After high school, Barbara will continue to work on vocational skills in a program at the University of Missouri-St. Louis through the Special School District.

When Barbara and the other students returned to Hazelwood West that day from St. Sophia's, she changed out of her uniform and into a Hannah Montana t-shirt before working on an assignment, writing about what she did well at work that day.

Teachers choose the students who work with the elderly carefully because of the challenges in a nursing home, said Heather Johnson, one of her Special School District teachers at West. Barbara has thrived because of her outgoing personality and the ability to connect with the residents, she said.

She said it's the same at Hazelwood West. In the cafeteria, several students say hi.

"Hey Barbara, how are you?" one asks as she passes her table.

Barbara has been a bridge to the general education students, Johnson said.

"She sees the good in everyone," she said. "She accepts everyone, gives them a hug if she can see they're having a bad day."

Toby Meyer, 30, graduated Sunday with a degree in elementary education, becoming the first person in his family with a college diploma.

Eboni Boykin's story in many ways is like those of many children in urban schools. But her ascent to the Ivy League illustrates what is possible.

Barbara Behlmann jokes with her teacher Heather Johnson outside the St. Sophia Health & Rehabilitation Center in Florissant on Thursday, May 10, 2012. Photo by Erik M. Lunsford, elunsford@post-dispatch.com