ST. LOUIS — After the coronavirus pandemic curtailed traffic for more than a year, several events are expected to bring an influx of people to downtown St. Louis this weekend.

The Cardinals’ first home series of the year, the Go! St. Louis Marathon, the annual St. Louis Auto Show and a mass vaccination event at The Dome at America’s Center are all scheduled for Saturday and Sunday.

Some downtown roads will be closed for the festivities, and most of the concrete barriers will remain in place, said Todd Waelterman, the city’s director of operations. The barriers, narrowing traffic to one lane in several spots, were installed last summer in an effort to reduce reckless driving.

The only expected change this weekend is the opening of an additional lane on Broadway, one of the streets that’s been reduced to one lane in some places for almost eight months. 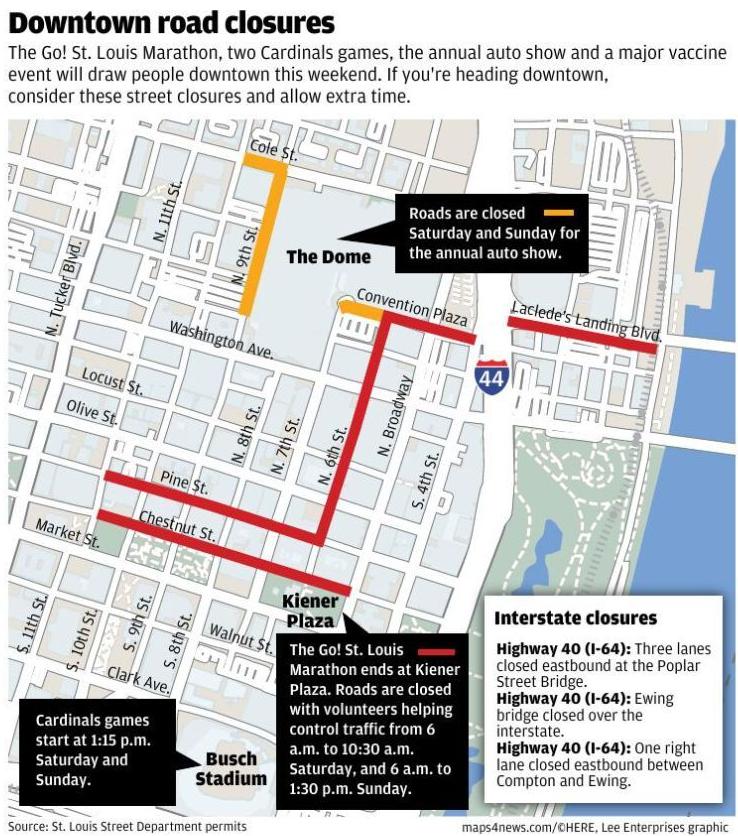 But Waelterman said the city is prepared to handle the extra traffic and will reevaluate each day.

“We’re going to monitor it. Our engineers are looking at what’s happening today during the ballgame, and we may have to do a little movement tomorrow before the weekend,” Waelterman said Thursday. “It’s a balance of having safe, controlled streets and people being able to get around.”

First pitch at Busch Stadium is slated for 1:15 p.m. Saturday and Sunday. Only about 14,500 fans are allowed in the ballpark each day because of COVID-19 restrictions, but Waelterman said he expects 50,000 to 100,000 fans downtown between the two days.

The auto show will close Cole Street between Ninth and 10th streets, Ninth Street from Lucas Avenue to Cole Street, and Convention Plaza between Sixth and Seventh streets.

The marathon, ending at Kiener Plaza, will close Sixth Street between Chestnut and Pine streets, and Chestnut Street from Seventh Street to North Broadway. Those are the only streets officially closed, but several others including portions of Laclede’s Landing Boulevard, Sixth Street and Pine Street will be blocked by marathon volunteers who will help direct traffic, event organizers say.

The mass vaccination event at the Dome will be open from 8 a.m. to 6 p.m. Saturday and Sunday. All Missourians 16 and older will be eligible for a vaccine starting Friday.

The expected influx of people downtown comes as the St. Louis Department of Health announced that people ages 20 to 39 continue to drive new COVID-19 cases, and that the portion of cases coming from kids has doubled from previous weeks. That uptick could be because vaccine has not yet been available for children and teenagers.

St. Louis Cardinals fans were inside Busch Stadium for the first time since 2019, as the team faced the Milwaukee Brewers in the Cards' home opener on Thursday, April 8, 2021. About 14,500 tickets were available for socially distanced seating groups inside the park.