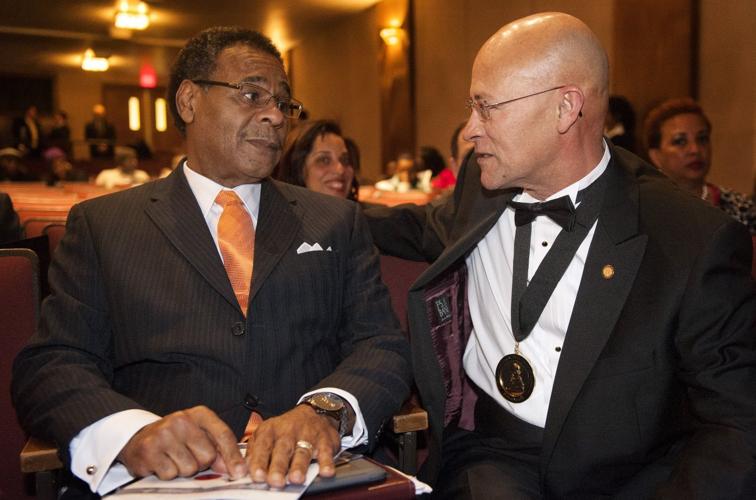 US Rep. Emanuel Cleaver II, D-Mo. (left) talks with Michael Middleton, interim president of the University of Missouri system, before the start of the program at the 30th annual Dr. Martin Luther King, Jr. Statewide Celebration Kick-off Program for Missouri Saturday, Jan. 9, 2016 at Harris-Stowe State University in St. Louis. Cleaver was the keynote speaker at the event and recipient of the Distinguished Chairman's Award. Photo by Sid Hastings 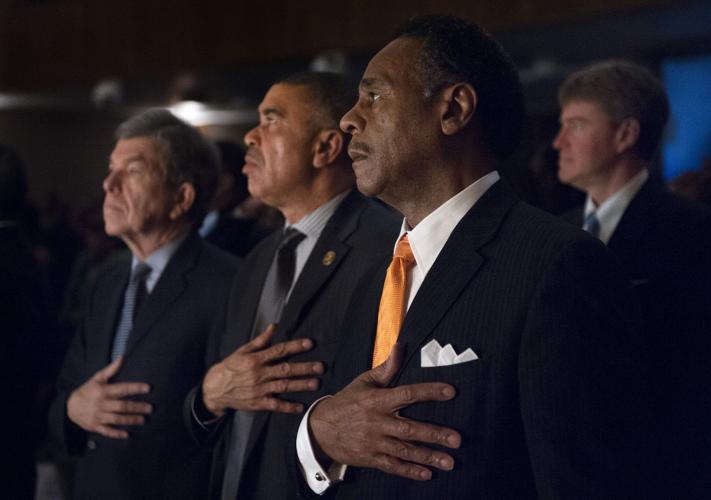 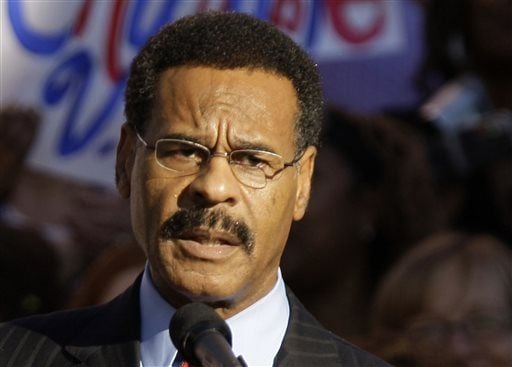 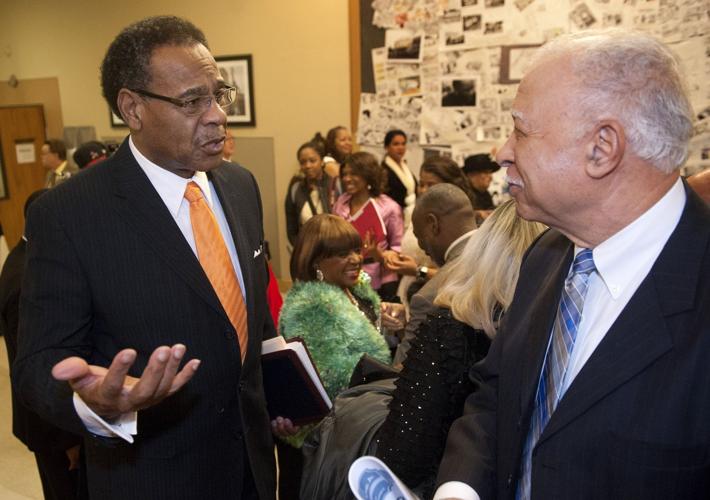 Harris-Stowe State University, where Cleaver spoke Saturday, has hosted the opening celebrations of the annual King events for the last 30 years.

Cleaver delivered a rousing speech at Harris-Stowe State University that generated laughs and applause, including a standing ovation at the end. He urged attendees to “wake up” from what he called apathy.

His speech, more closely resembling a sermon, delivered a lesson about the perils of injustice that can happen while the electorate sleeps.

“He did not dream his life. He lived his dream,” Cleaver said of King.

Cleaver condemned talk of black-on-black killing. He said the nation should be more concerned with “people killing people.”

“We’re more anti-Muslim than we are anti-murder,” Cleaver, said referring to Donald Trump and his presidential campaign.

“The people who are not of good will, they want us to sleep.”

After serving as a City Council member for 12 years, Cleaver was elected the first black mayor of Kansas City in 1991. He was elected to Congress in 2004.

Many of those politicians talked about the need for real change — not talk — to improve race relations and policing in communities such as Ferguson.

On Tuesday, St. Louis University, in partnership with the Urban League of Metropolitan St. Louis, will host its fifth-annual tribute to King, at the Busch Student Center. The program begins at 9:30 a.m., with a breakfast an hour earlier.

Diane Nash, a longtime civil rights activist, will be the keynote speaker.

Nash, a Chicago native, became involved in the nonviolent movement in 1959 while a student at Fisk University.

She led a student sit-in movement in Nashville, Tenn., the first southern city to desegregate its lunch counters.

She and others established the Student Non-Violent Coordinating Committee.

In 1961, Nash coordinated the Freedom Ride bus trip from Birmingham, Ala., to Jackson, Miss.

She was appointed by President John F. Kennedy to serve on the committee that promoted passage of the Civil Rights Act of 1964.

The largest annual event comes on Jan. 18, when the country officially marks King’s birthday this year.

Under the dome of the Old Courthouse, music and speeches begin at 10 a.m.

The courthouse is where slaves were sold on the outside steps, and where Dred Scott, with his wife, Harriet, sued for their freedom in a case that hastened the start of the Civil War.

A large number of elected officials and clergy are expected to attend the ceremony, which will be followed by a march to Washington Tabernacle Baptist Church, 3200 Washington Avenue, for an interfaith service.

The church is one of the places in St. Louis where King spoke.

In a related observance, Christ Church Cathedral, at 13th and Locust streets, will have a daylong reading of writings and speeches of King. The come-and-go event runs from 9 a.m. to 5 p.m.

“Let his words resound and wash over you,” is how the Rev. Michael Kinman describes the annual readings of King.

At Southern Illinois University Edwardsville, the annual King lunch, on Jan. 20, will be preceded by a conference on the Black Lives Matter movement.

Venessa A. Brown, associate chancellor for Institutional Diversity and Inclusion, said it makes sense to pair the new Black Lives Matter conference with the annual King event, putting in perspective what happened during the Civil Rights Movement with race-related conflicts today, including Ferguson.

“This is a great opportunity, given what’s going on in the world, in the nation, in the region, to really make this an educational experience,” Brown said.

Where • 13th and Locust streets

Several St. Louis streets will be blocked off today as the Annie Malone May Day Parade returns as a live event downtown.

Acclaimed architect Gyo Obata, who died in March at the age of 99, will be honored at a public memorial service on Saturday.

Wanted in Glendale: Buyers who will preserve 214-year-old home

A home for sale at 9 Hill Drive in Glendale dates to around 1808, when that section of the region was still considered wilderness.

Police said a stolen Jeep was speeding to elude officers when it hit a minivan carrying the seven victims.

Abortion, homelessness and guns: Inside the Post-Dispatch with Tony Messenger

Deck sealing that was to begin Thursday night has been delayed for the eastbound lanes of Interstate 70 across the Blanchette Memorial Bridge.

Young, transgender and targeted in Missouri

Where in the St. Louis area is it? Search addresses to find towns and neighborhoods

Use this tool to get your bearings among the hundreds of towns and neighborhoods in the metropolitan area.

US Rep. Emanuel Cleaver II, D-Mo. (left) talks with Michael Middleton, interim president of the University of Missouri system, before the start of the program at the 30th annual Dr. Martin Luther King, Jr. Statewide Celebration Kick-off Program for Missouri Saturday, Jan. 9, 2016 at Harris-Stowe State University in St. Louis. Cleaver was the keynote speaker at the event and recipient of the Distinguished Chairman's Award. Photo by Sid Hastings