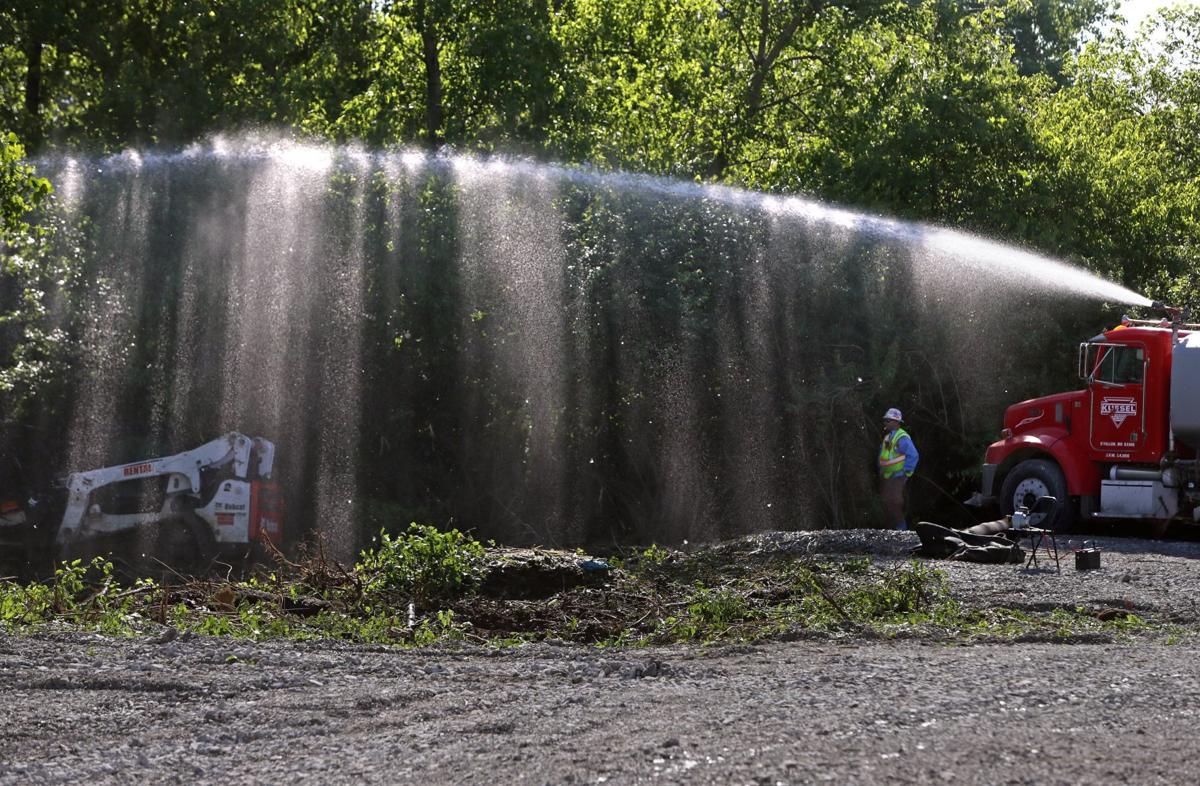 A water truck performs dust suppression as part of the non-combustible cover project at the OU-1 Area 2 of the Bridgeton Landfill on Friday, May 13, 2016. The area contains radiological impacted materials (RIM) at or near surface level and is being cleared of trees, then covered with geotextile and gravel to mitigate fire potential. Photo by Cristina M. Fletes, cfletes@post-dispatch.com 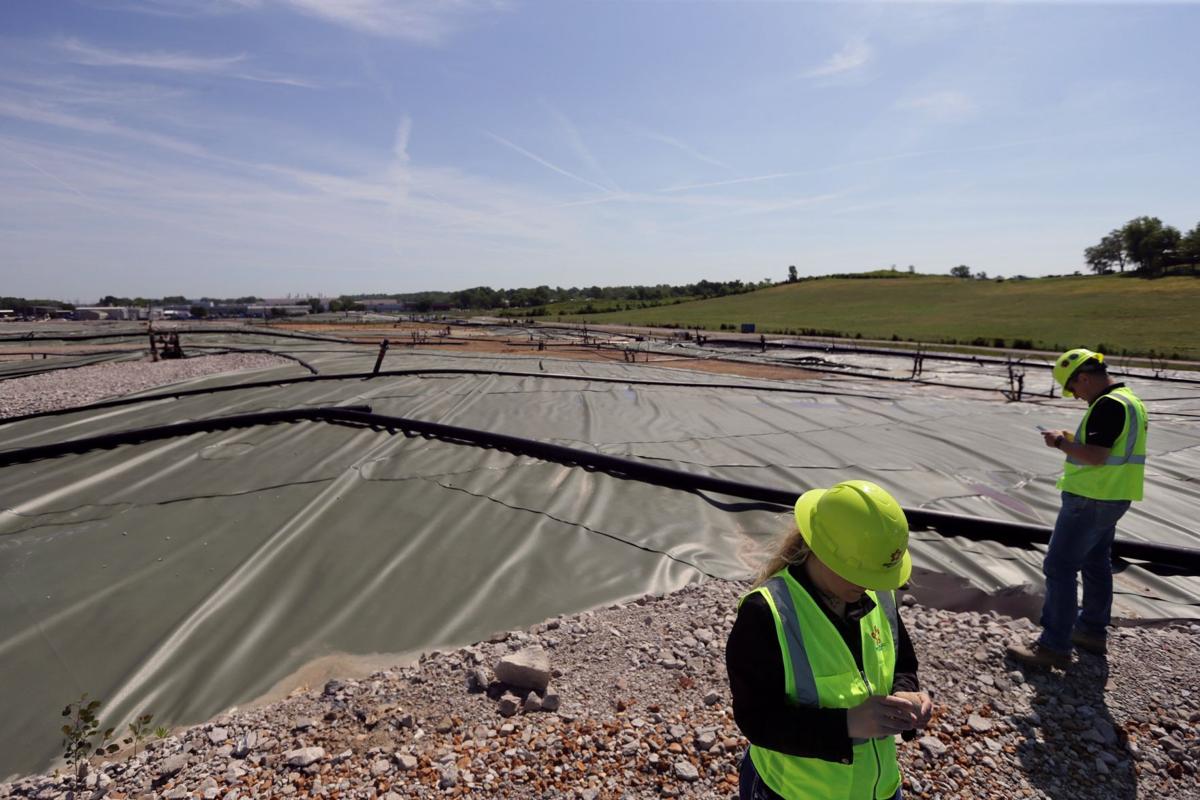 Environmental Managers Erin Fanning (left) and Brian Power stand at a low fill area where a subsurface reaction has already taken place at the Bridgeton Landfill on Friday, May 13, 2016. Photo by Cristina M. Fletes, cfletes@post-dispatch.com

Giving the U.S. Army Corps of Engineers authority over West Lake Landfill won’t speed up the removal of radioactive contamination, according to a top corps official.

Responding to an inquiry from Rep. Fred Upton, R-Mich., Steven Stockton, the corps’ director of civil works, wrote that “the addition of the site to the (Formerly Utilized Sites Remedial Action Program, or FUSRAP) would not accelerate remediation” at the West Lake Landfill. The letter, dated June 2, was obtained by the Post-Dispatch on Monday.

Upton is chairman of the House Committee on Energy and Commerce, where federal legislation — sponsored by members of the St. Louis-area delegation representing both parties — is tied up that would move West Lake Landfill into the corps’ FUSRAP program.

The program was created to specifically handle radioactively contaminated sites, and the U.S. Senate passed a bill moving West Lake into the program in February.

Right now, the Environmental Protection Agency oversees the landfill through its Superfund program.

But local activists, residents and politicians complain that nothing has been done in the 25-plus years the EPA has had jurisdiction over the landfill. Many have grown to distrust the agency, which has said the radioactive waste is contained and does not currently pose a risk to residents. Far more people are aware of the contamination since the adjacent Bridgeton Landfill began burning five years ago.

While they wait for the EPA to issue a decision, residents see FUSRAP actively cleaning up low-level radioactive contamination along Coldwater Creek, which was contaminated with uranium processing waste stored near Lambert-St. Louis International Airport.

The corps has remediated other sites near the airport in north St. Louis County, where uranium byproducts from the nation’s early nuclear weapons program were stored, and north of downtown, where Mallinckrodt Chemical Works purified the uranium for the government.

Those cleanups over the last 20 years, however, are paid for with tax dollars and dependent on annual appropriations from Congress. (The corps can sue to recover program costs later.)

Recently, the budget has been about $100 million and has to be divvied up among 24 sites in FUSRAP, Stockton wrote in his response to Upton.

The EPA can order responsible parties to pay for cleanup up front, though it often works with them to come to a solution to avoid having to take the matter before a judge.

The EPA has promised it will propose a new cleanup plan by the end of the year. Landfill owner Republic Services opposes a move to FUSRAP and argues it will take far longer to resolve the situation if it is handed to another federal agency.

The EPA’s 2008 proposal, now under review, to cap the site was estimated to cost $43 million. Removing the waste and shipping it to a disposal area could cost upward of $400 million.

“Transferring the site to FUSRAP would subject the site to the limitations of the FUSRAP budget and appropriations process, and its necessary prioritization with respect to the sites currently competing for the program’s limited appropriations,” Stockton wrote.

Stockton added that while he couldn’t predict what priority the site might have within FUSRAP, “the vast majority of current FUSRAP appropriations are dedicated to ongoing cleanup at sites already in the program.”

There are about six sites right now that receive 80 percent of the funding, and the corps is supposed to “focus on sites nearing completion.”

While it may take a little longer for the corps to initiate a cleanup at West Lake, transferring responsibility would still be worth it, said Ed Smith, who follows the landfill for the Missouri Coalition for the Environment. Smith said the corps has more expertise than the EPA in handling radioactive waste.

“EPA has no experience, at least in (the local office), of dealing with radioactive landfills,” Smith said.

Given the EPA already proposed to cap the waste in place, Smith said it’s more likely the corps would propose removing the contamination, another longtime Coalition for the Environment goal.

“It’s like defending your college thesis,” he said. “The EPA has already gone on record saying capping and leaving it there is safe forever. It’s highly unlikely they’re going to come to a decision that’s 180-degrees from that.”

The U.S. Army Corps of Engineers replies to Congress on how it would handle a West Lake Landfill cleanup.

A water truck performs dust suppression as part of the non-combustible cover project at the OU-1 Area 2 of the Bridgeton Landfill on Friday, May 13, 2016. The area contains radiological impacted materials (RIM) at or near surface level and is being cleared of trees, then covered with geotextile and gravel to mitigate fire potential. Photo by Cristina M. Fletes, cfletes@post-dispatch.com

Environmental Managers Erin Fanning (left) and Brian Power stand at a low fill area where a subsurface reaction has already taken place at the Bridgeton Landfill on Friday, May 13, 2016. Photo by Cristina M. Fletes, cfletes@post-dispatch.com