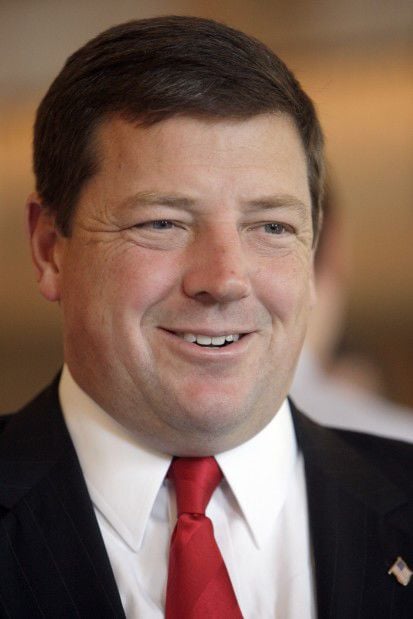 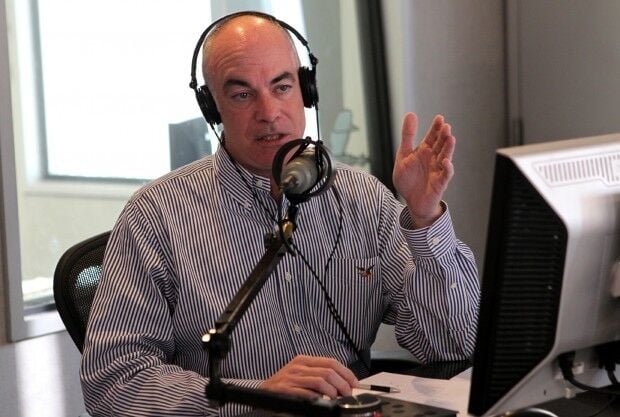 Dec. 07, 2010--John Hancock, former head of the Missouri Republican Party, regularly co-host on KMOX with Mike Kelley (not pictured), former head of the Missouri Democratic Party. Hancock talks with Congressman Russ Carnahan, Tuesday about the recent tax cut announcement, and try to gain some insight into how he and rest of colleagues may vote. Dawn Majors dmajors@post-dispatch.com

Ed Martin, who has led the Missouri Republican Party as chairman for the past two years, announced Monday he will drop his bid for re-election, setting up a vacancy as the party heads into a gubernatorial primary battle.

Martin, who served as chief of staff for former Gov. Matt Blunt, was preparing for a fight to keep his job later this month. But in a surprise move, he said he will leave the post to become president of the Eagle Forum, a conservative, pro-family organization founded by conservative activist Phyllis Schlafly.

Martin was facing a challenge as party boss from Republican consultant John Hancock, who had criticized Martin’s fundraising ability on the cusp of an important 2016 election cycle.

Martin defeated David Cole as chairman after a party shake-up following the 2012 elections, where the party failed to win major statewide offices despite a strong showing for Republican presidential candidate Mitt Romney.

“At the time, the party seemed fractious and out of touch,” Martin said in a statement. “Many felt the party was not listening to ‘We The People.’ They were seen as taking the votes and support of patriotic, grass-roots Republicans for granted. I knew we could do much better.”

He added: “Many of the men and women I have worked with over the last two years proved that the MOGOP could correct course and regain our lost footing. The crushing defeat of Big Government and Crony ‘Capitalist’ politicians in the 2014 election demonstrated that our party had a message worth running on — a winning message.”

Martin was spirited but controversial. The party had struggled to raise money under his watch. A recent campaign finance disclosure showed the state GOP with just $235 in its campaign account. Martin’s departure leaves Hancock, the party’s former executive director, as the sole person in the race. No other challenger jumped in after news spread of Martin’s departure Monday, but Hancock speculated that it could happen.

“I’m sure that there are people that are not crazy about me that will try to find another candidate,” Hancock said, adding that he wasn’t certain that anyone would step forward.

If elected, Hancock said he will work to rebuild the party’s fundraising apparatus. Hancock, who once operated a political consulting firm in the St. Louis area, commutes to Ohio to work for the Columbus-based Strategy Group, a national media and opposition research firm.

“What is going to take up the bulk of my time is assembling the resources ... to have the most ambitious grass-roots program in the history of our state party,” Hancock said.

The stakes are high for the party in 2016, when the ballot will be filled with statewide races. Republicans have been successful in statehouse races, but have struggled to win statewide offices in a state that skews conservative.

“Ed Martin has been a very energetic chairman for the Missouri Republican Party during his tenure and I’d like to thank him for his service,” Schweich said on Monday. “I wish him all the best as he moves forward in leading one of America’s largest conservative grass-roots organizations.”

Hancock, a frequent radio host on KMOX, has been an ally of Hanaway in previous years.

Hanaway said on Monday she doesn’t think the change will have an impact on her race against Schweich.

“I’m pleased we’re not going to have a contentious fight for statewide GOP (chairman),” Hanaway said.

“It is imperative that our candidates for governor talk about their attributes and qualifications and significantly less time talking about their opponent,” Hancock said. “We have two announced candidates who are both exceptionally qualified and both outstanding leaders.”

Hancock praised Martin for his work.

“We have historic majorities,” Hancock said. “There are more Republicans serving in Jefferson City than before.”

Martin had developed a close relationship with Schlafly and her organization over the years.

“Phyllis was relentlessly pro-life, and had unwavering faith in freedom,” Martin said. “Nobody was a more zealous advocate for America and her defense during the Cold War than Phyllis Schlafly.”

He talks vaguely of a "suspended lawyer" working for the other side who was "telling a dizzying series of lies” about him.

Dec. 07, 2010--John Hancock, former head of the Missouri Republican Party, regularly co-host on KMOX with Mike Kelley (not pictured), former head of the Missouri Democratic Party. Hancock talks with Congressman Russ Carnahan, Tuesday about the recent tax cut announcement, and try to gain some insight into how he and rest of colleagues may vote. Dawn Majors dmajors@post-dispatch.com