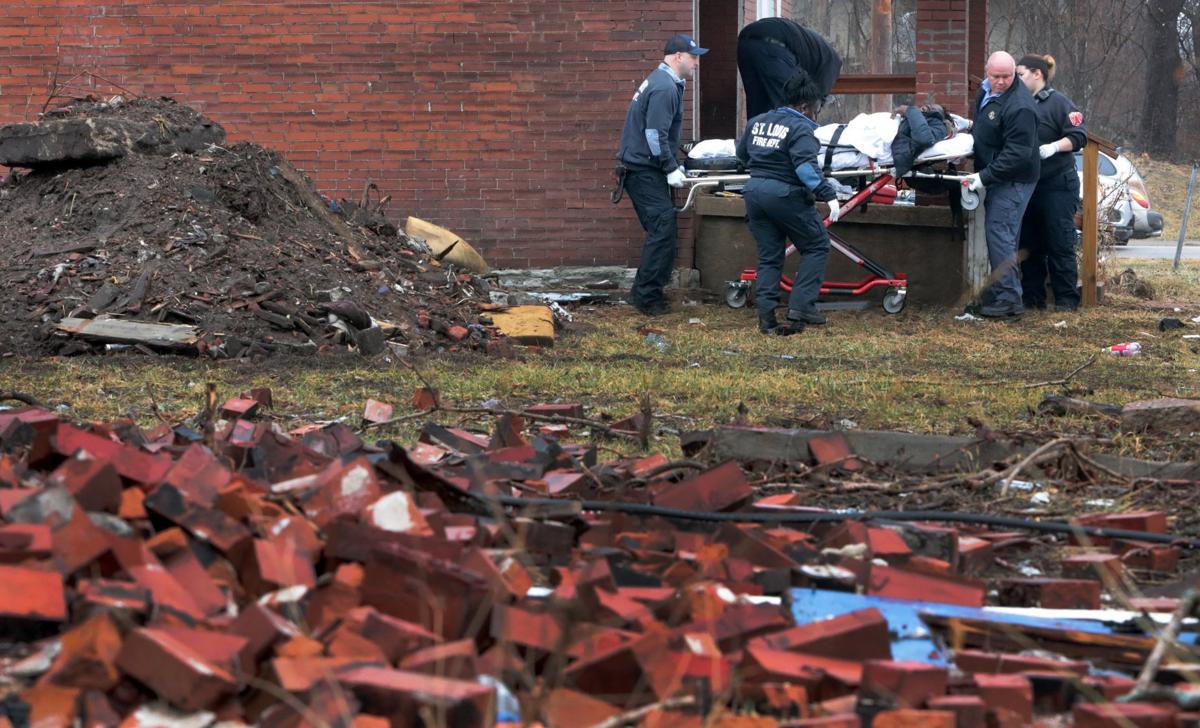 St. Louis Fire Department emergency workers revived an unresponsive woman with a dose of Narcan, used for overdose patients, after she was found slumped on the porch of a vacant home on Bacon Street at North Market Street on Thursday, Feb. 22, 2018. A two-block stretch of Bacon Street is lined with burned and crumbling homes, one block from North Grand Boulevard. Photo by Robert Cohen, rcohen@post-dispatch.com 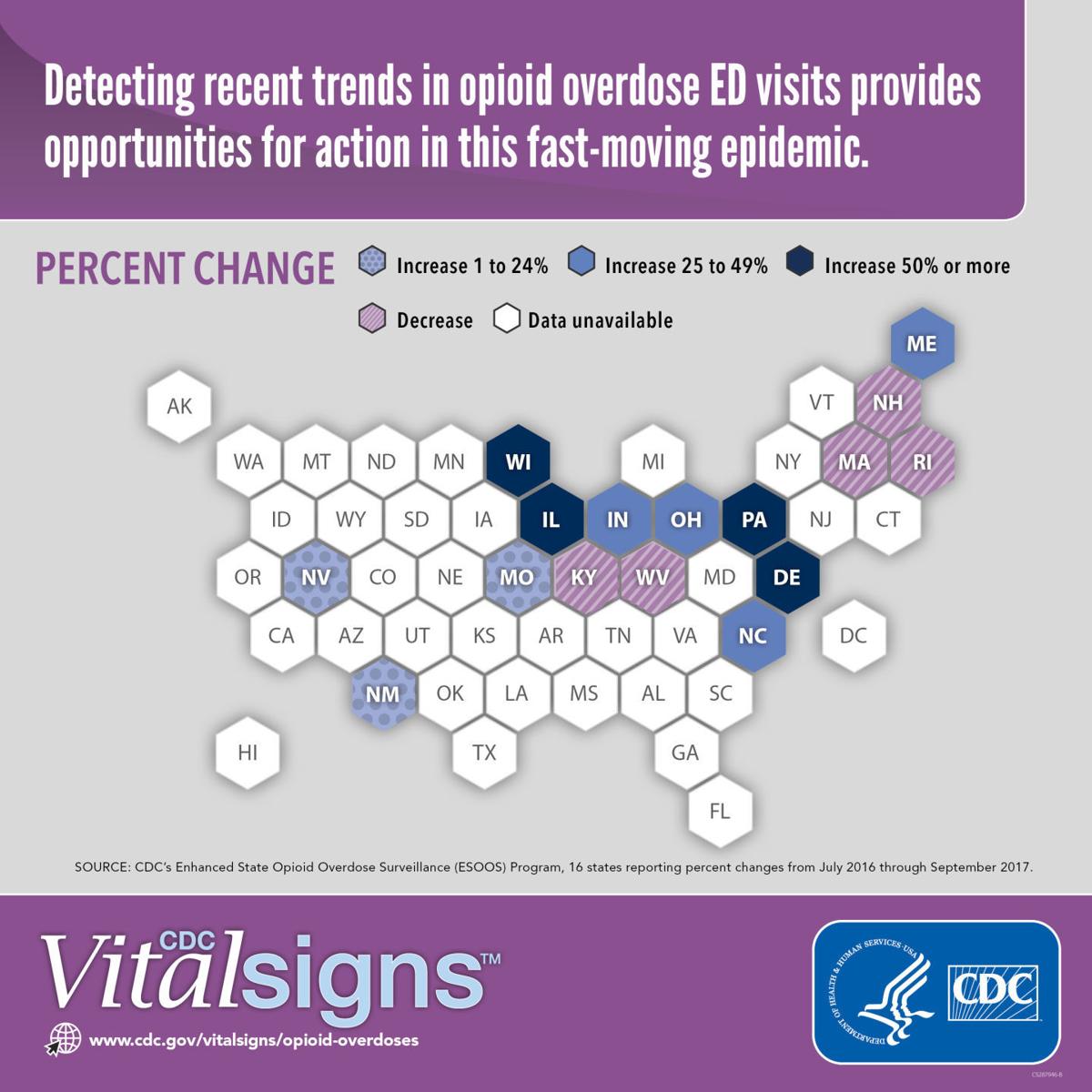 Measured by overdose cases reported in hospital emergency departments, this map shows the opioid crisis got worse in Missouri in 2016 and much worse in Illinois.

Emergency room visits for opioid overdoses spiked in 2017, particularly in the Midwest, according to a new report. The rise in hospital visits is an early indicator that the nation’s deadly opioid epidemic is still growing, doctors said.

The Midwest had the highest increase of ER visits for opioid overdoses in any region, up an average 70 percent from July 2016 through September 2017 according to a report Tuesday from the Centers for Disease Control and Prevention.

More than 142,000 people were taken to emergency rooms for opioid overdoses in the 15-month period, resulting in a 30 percent increase in the rate of opioid-related visits in that time.

While the number of patients was not broken down by state, Illinois had a 66 percent increase in opioid overdose ER visits, while Missouri’s rate increased by 21 percent, according to the report.

Overdoses on opioids (prescription painkillers or street drugs laced with heroin or fentanyl) are on the rise for men and women across all age groups and regions.

“The bottom line,” said Dr. Anne Schuchat, the CDC’s acting director, “is that no area of the United States is exempt from this epidemic.”

The data represent a sign that efforts to curb the worst drug epidemic in U.S. history have not taken hold in most of the country. And unlike the annual tally of overdose deaths, which lag by a year, they provide more evidence that the crisis continues to head in the wrong direction. Nearly 64,000 Americans died of drug overdoses, two-thirds of them from opioids, in 2016.

St. Louis County will set an annual record for opioid-related deaths when the 2017 numbers are finalized, said Brandon Costerison of the National Council on Alcoholism and Drug Abuse-St. Louis.

“The biggest cause that we’re seeing is the rise and the prevalence of fentanyl,” Costerison said. “Over 80 percent of overdose deaths last year involved fentanyl, a dramatic increase in just a couple years.”

Costerison said the CDC’s report on emergency room visits highlights the need for increased community access to naloxone, or Narcan, which can block the effects of opioids. More doctors should be allowed to prescribe suboxone, a treatment for opioid dependence, he added.

Federal guidelines, which many addiction experts say are outdated, require doctors to apply for waivers to prescribe certain amounts of suboxone.

A separate study published Monday in Pediatrics medical journal found that hospitals are also seeing a rise in opioid overdoses among children.

The study found that hospitalizations were most common in children ages 1 to 5 who accidentally ingested prescription painkillers, and teenagers who intentionally used painkillers or street drugs.

The CDC survey found that rates of emergency room visits were higher in large cities. There were small declines in overdose visits in a few states, including Massachusetts and New Hampshire. But the drops were considered too small to be significant and may have occurred because those states had very high overdose rates in previous years, Schuchat said.

The St. Louis region is experiencing a heavy infestation of horned oak gall, but this south St. Louis County community faces a threat to its namesake.

St. Louisans were moved to help after Sept. 11, and were changed by the experience

The Post-Dispatch reconnected with some of the people we interviewed 20 years ago to discuss how the events changed their lives.

The 13 troops were killed Aug. 26 as they were helping to screen Afghans and others at the Abbey Gate of the Kabul airport.

"We have no intention of having anybody moved," Jamo Events' Drew Jameson said of the Lot on the Landing that kicks off Thursday.

Across the St. Louis region, people gather to remember 9/11

‘Over time, it becomes more and more like history instead of current events.’

Fleisher: From 9/11 to a global pandemic, my generation grew up on terror and uncertainty

For a generation of Americans, it's always been like this.

St. Louis Fire Department emergency workers revived an unresponsive woman with a dose of Narcan, used for overdose patients, after she was found slumped on the porch of a vacant home on Bacon Street at North Market Street on Thursday, Feb. 22, 2018. A two-block stretch of Bacon Street is lined with burned and crumbling homes, one block from North Grand Boulevard. Photo by Robert Cohen, rcohen@post-dispatch.com

Measured by overdose cases reported in hospital emergency departments, this map shows the opioid crisis got worse in Missouri in 2016 and much worse in Illinois.