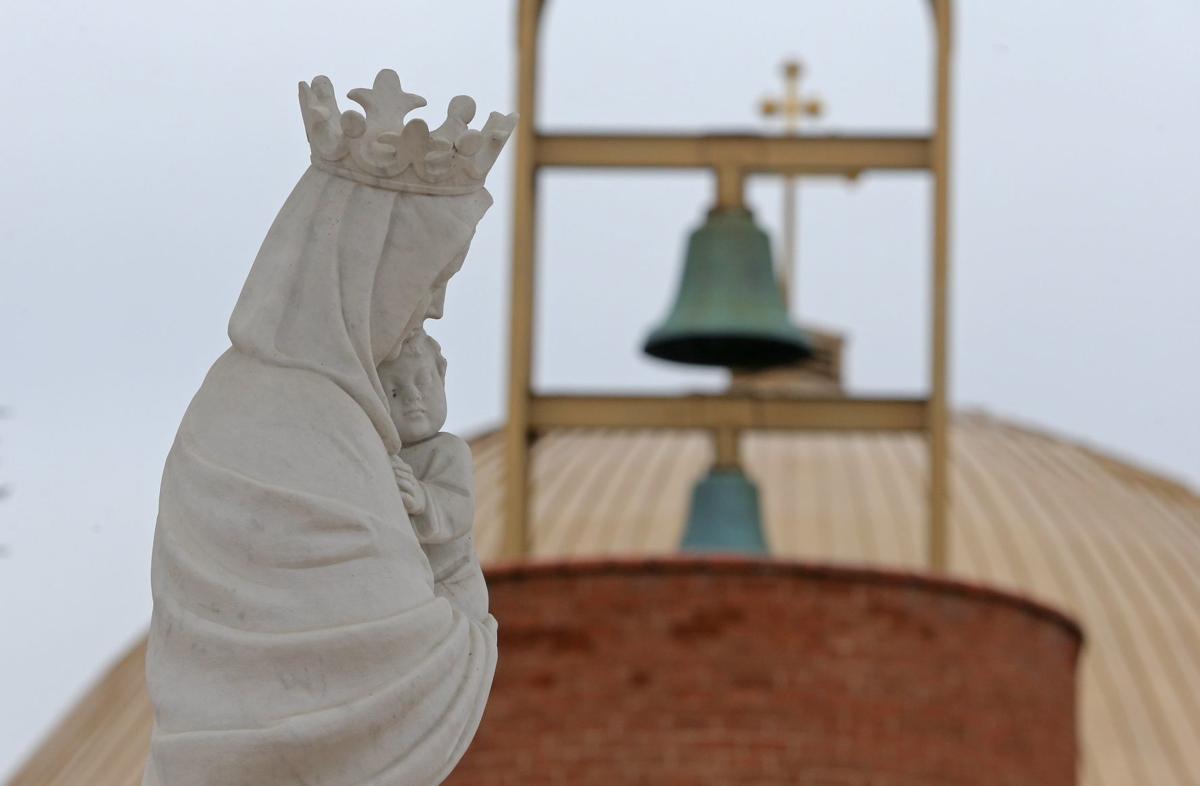 Shrine Our Lady of the Cedars stands in front of St. Raymond's Maronite Co-Cathedral on Monday, Feb. 10, 2020, near downtown St. Louis. The Archdiocese of St. Louis is merging St. Raymond's with St. Elizabeth's of Hungary parish in Crestwood. Photo by J.B. Forbes, jforbes@post-dispatch.com 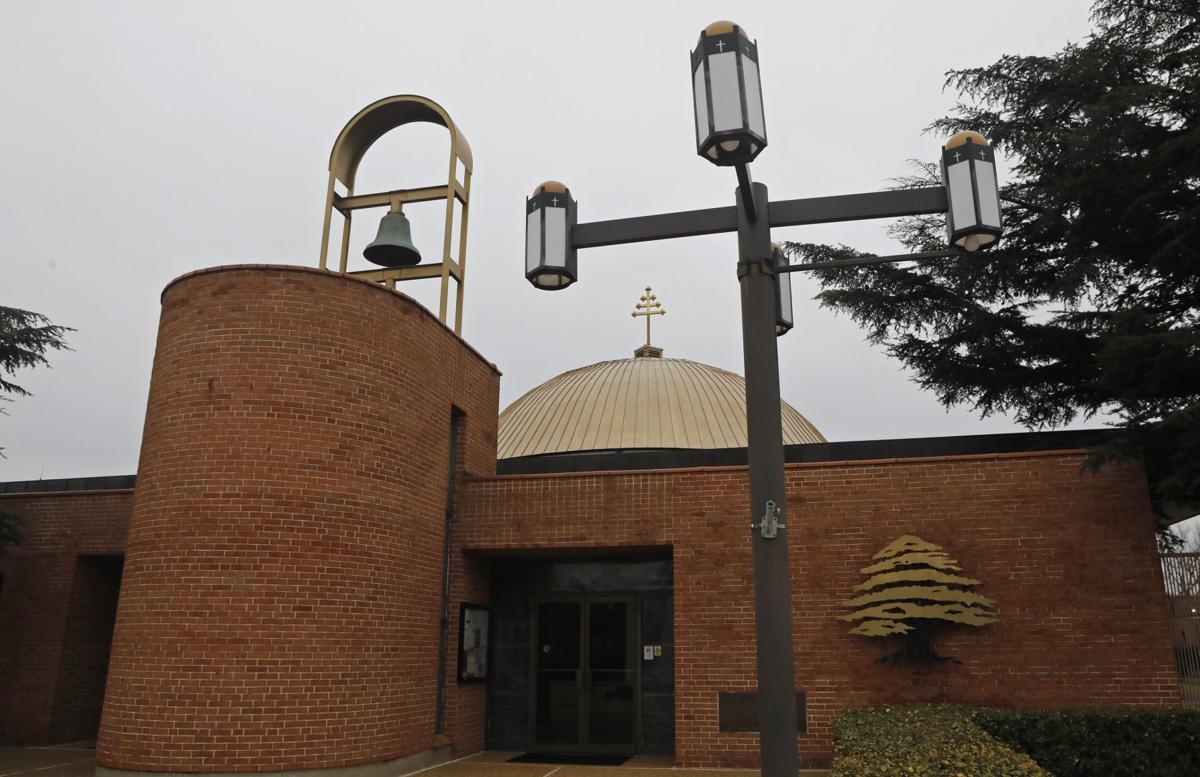 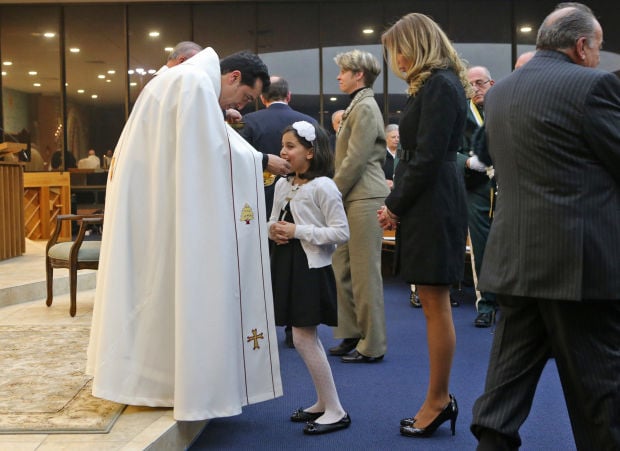 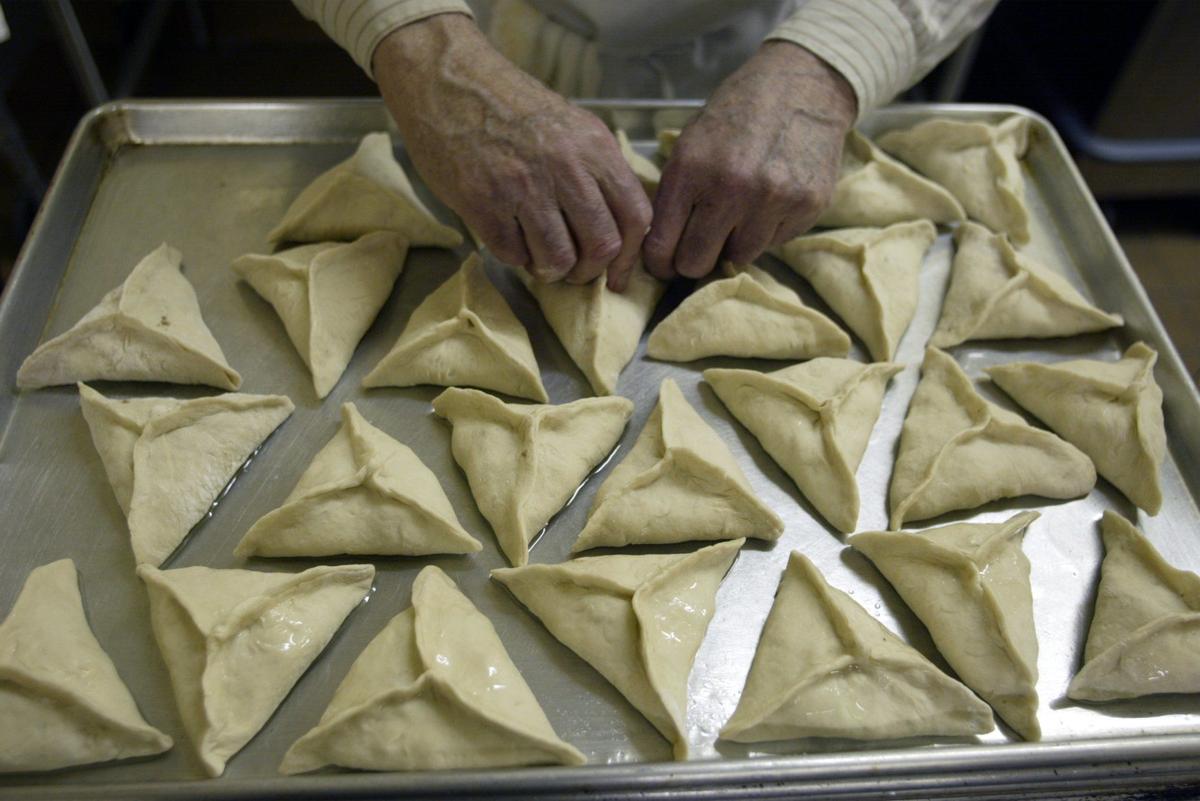 ST. LOUIS — St. Raymond, a religious hub for the city’s Lebanese community south of downtown since 1911, and St. Elizabeth of Hungary, a Crestwood parish founded in 1956 to meet a boom in Roman Catholics in South County, are set to combine this summer, according to church officials.

The announcement has left members of both churches with questions about the future. At St. Raymond — famous for its Wednesday lunches of traditional Middle Eastern fare — concerns include whether closure is looming.

For now, plans include holding services at both locations, though they will share a priest.

If the Maronite parish runs St. Elizabeth’s for 10 years, it will get full ownership of the property. If it opts to sell before the end of 10 years, proceeds will go to the Archdiocese of St. Louis.

The move marks an unusual partnership between two distinct branches of the Catholic faith. St. Elizabeth is Roman Catholic, the largest subsection of the denomination, while St. Raymond is Maronite, a branch of Catholicism with roots in Syria and Lebanon that includes the Aramaic language in its services. The churches have different traditions, but are both obedient to the pope.

On Sunday, members of St. Raymond gathered at the church’s Cedars banquet hall for a tense parish meeting about the decision, passing a microphone to ask questions of church leaders.

Some members offered support: The church would be foolish to reject the St. Elizabeth’s property, offered at no cost and worth an appraised $3.4 million, they said. And many members of the congregation already live closer to Crestwood.

Others argued with visible emotion that the move could mean the end of the community at St. Raymond’s, built by generations of Lebanese Americans around its historic home.

“The bricks and mortar is what helped us form a community and these bricks and mortar have been important to our families and our ancestors,” said Nancy Stevens, whose grandparents were Lebanese immigrants to St. Louis at the turn of the 19th century. “I don’t want to hear comments that this building could get sold. You’re dealing with a lot of emotions. You might pass through, but to us, we’ve been here for generations.”

Bishop Elias Zaidan, who heads the diocese that oversees all Maronite churches in the western U.S., said no decision has been made on whether to close the downtown location.

“The future will depend on you, if we keep making St. Raymond downtown solid, then great,” he told those at the meeting. “It is up to everyone here present to make St. Raymond viable.”

The Maronite diocese will take over the lease for St. Elizabeth’s on July 1.

St. Elizabeth has seen years of uncertainty. Some parishioners are relieved their “small, but mighty” church will stay open. Others worry about sharing one priest between two parishes and how the balance between two traditions in Catholicism will work.

The decision comes as the Archdiocese has been evaluating parishes across the area for closure.

“I hope people welcome the news with an open heart,” said Peter Frangie, a spokesman for the archdiocese. “If you look at it with an open mind, it’s a wonderful opportunity to have a greater understanding of another tradition in the Catholic faith.”

St. Raymond was founded when a group of immigrants, mainly from Hadchit, Lebanon, pooled their money to start the church around 1911 in a converted four-family flat in their neighborhood — today’s LaSalle Park.

By the 1940s, though, many Lebanese immigrants were moving to the suburbs. The parish went more than 20 years without a priest.

“It was a group of parish women that kept it alive,” said Stevens, a longtime parishioner. The women sold lunches to the neighborhood to pay the bills and continued to push the church for a priest.

In 1964, the church agreed to assign a young priest, Robert Shaheen, the first American-born Maronite priest in the U.S. Shaheen made it his mission to grow St. Raymond. He called up anyone in the St. Louis phone book with names that sounded Arab or Lebanese and encouraged them to attend services, according to a 1973 story in the Post-Dispatch.

Within 10 years, membership boomed from about 50 families to more than 400. The parish built a new church in November 1975 and a home for the priests and the Cedars banquet hall within the next five years.

By the time of the expansion, there were already questions if the new church should be built in the suburbs where many Maronite Catholics had migrated, but Shaheen opted to keep it near downtown.

“Our church began down here and I think this is where we should stay,” he told the Post-Dispatch in 1973. “The people of our parish are scattered all over the city and county, but we have fine highways that will bring them here quickly and easily on a Sunday morning, and I believe this is one great way to develop the downtown area.”

Over the years, the parish’s Wednesday lunches of meat pies and grape leaf rolls became a favorite networking spot for St. Louis judges, lawyers and politicians, including St. Raymond parishioners Francis R. Slay, a popular restaurant owner and a power broker in city politics, and his son Francis G. Slay, mayor of St. Louis from 2001 to 2017.

The lunches will continue and the Cedars banquet hall, often rented for proms and fundraisers, will still be used to fund St. Raymond downtown, church officials said at Sunday’s meeting.

About 13 miles southwest of downtown St. Louis, St. Elizabeth of Hungary Parish was founded in 1956 with about 400 families. An elementary school was added a few years later.

“It was booming,” said Jen Ryan, a pastoral associate at the parish.

St. Elizabeth’s got so big that the archdiocese had to build another church, St. Justin Martyr, less than 2 miles away, Ryan said.

But over the years, the congregation grew older and attendance fell. St. Elizabeth’s elementary school closed in 2004.

Still, the parish kept itself running in part by renting out its gym and former school facilities for sports teams and events such as charity trivia nights.

“We’re like the little parish that could,” Ryan said.

On Jan. 29, church leaders announced at a parish meeting that St. Raymond would take over management of the parish.

“Over the last decade, the parish has faced a lot of transition and uncertainty regarding its future,” Archbishop Robert Carlson said in a letter announcing the change. “We have now found a solution which we are confident will provide long-term stability for St. Elizabeth of Hungary.”

That solution is bittersweet, said parishioner Rosann Shannon who has been a member of the church for 14 years. That makes her a comparative newcomer to her friends who grew up at St. Elizabeth. “The people who were the backbone of the church are heartbroken. A few were in tears. We still need answers on so many things.”

Some details remain unclear — basics, such as times for church services and even the name of the parish.

“Personally, I think this is the best move for St. Elizabeth long-term,” said Ryan. “I welcome St. Raymond with open arms.”

“I also know,” she added. “We’ve got people here hoping they may bring some of those lunches with them.”

Five members of St. Louis-area family all diagnosed with virus

A member of the family, Jane Weinhaus, teaches at a Creve Coeur preschool where three other teachers have tested positive for the coronavirus.

Missouri is loosening its testing criteria for COVID-19. The state is boosting food stamp benefits for eligible households in Missouri, and waiving some work requirements. St. Louis leaders differ on closing City Hall.  The Summer Olympics in Tokyo won't be held until 2021.

At least 100 inmates will be freed from the St. Louis County Justice Center over concern about spreading the coronavirus. Another six deaths in Missouri and Illinois were reported. And the Missouri governor wants a federal disaster declaration. Some of Wednesday's developments in the pandemic.

Jobless claims nationwide soar to 3.3 million and explode in Missouri. More calls to free prisoners during the pandemic. The Four Seasons hotel in St. Louis shuts down. Some Illinois community health centers could close because of the virus. These are some of Thursday's developments.

The Spanish flu infected one-third of the world's population and killed 50 million or more worldwide. But St. Louis suffered less than other cities thanks to efforts to limit spread of disease.

Missouri mobilizes the National Guard to help with the state's COVID-19 response. A St. Clair County woman becomes the first virus death in the Metro East. Lincoln County reports its first two cases. Build-a-Bear closes all its stores. And business columnist David Nicklaus says the $2 trillion stimulus package is unprecedented, but may not be enough. These are Friday's developments.

Be on the lookout: Severe storms could roll through St. Louis this afternoon and evening

Storms should end by Saturday night and yield to a spectacular Sunday with sunshine and highs in the upper 60s.

Shrine Our Lady of the Cedars stands in front of St. Raymond's Maronite Co-Cathedral on Monday, Feb. 10, 2020, near downtown St. Louis. The Archdiocese of St. Louis is merging St. Raymond's with St. Elizabeth's of Hungary parish in Crestwood. Photo by J.B. Forbes, jforbes@post-dispatch.com 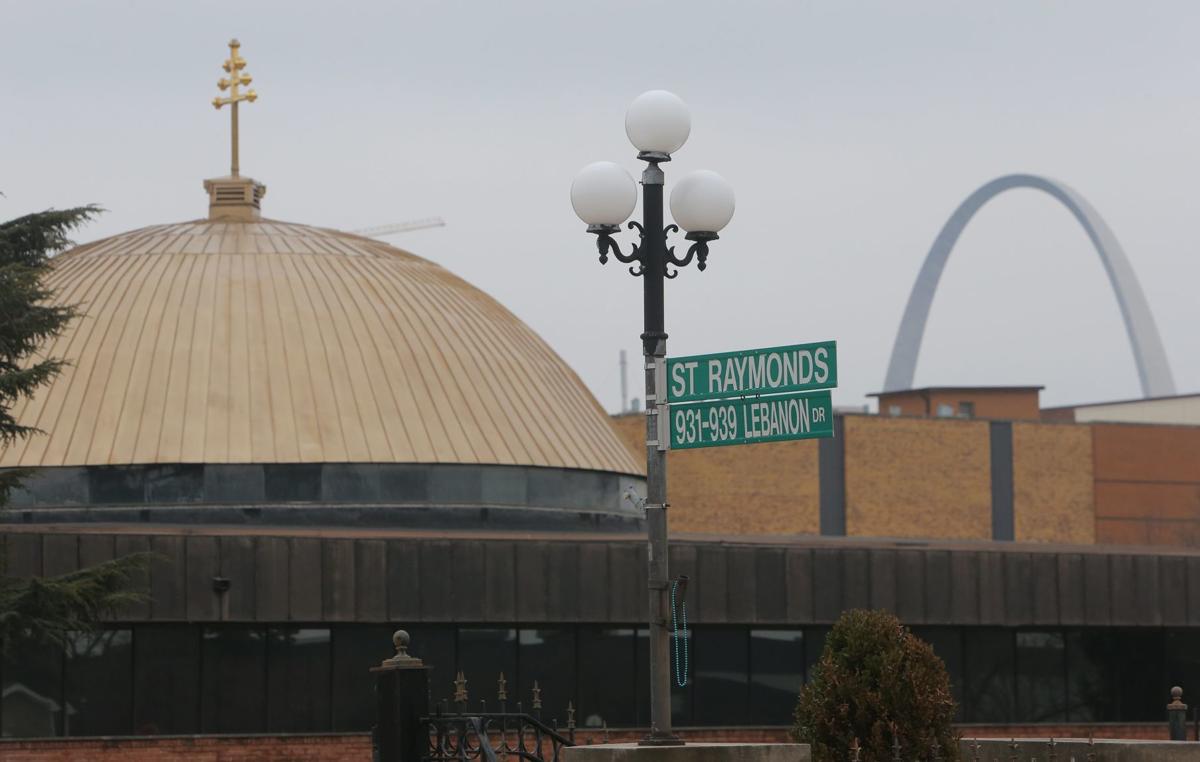 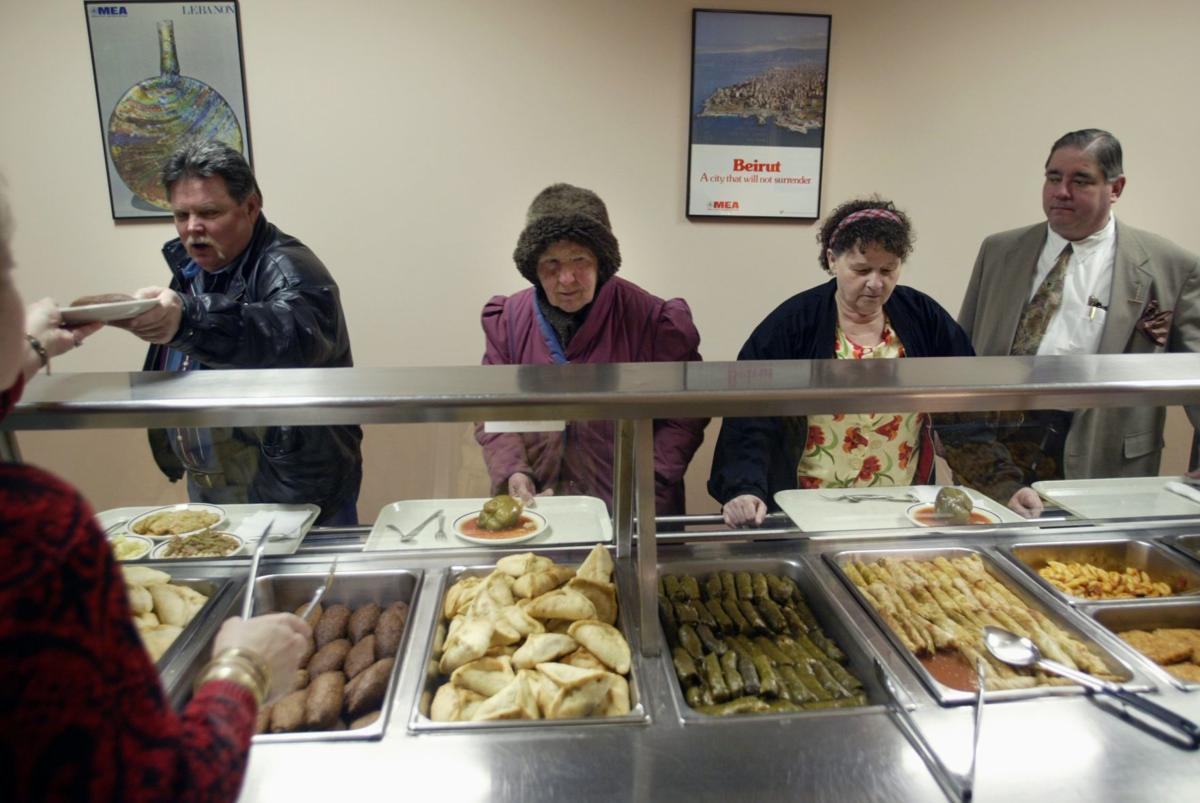 (4/3/02 Wednesday) At St. Raymonds Maronite Church Ramona Ezar serves a kibbi to Jeff Dames from a steam table that holds spinach pies, meat pies, and kibbi. On the wall a poster entitled "Beirut A city that will not surrender" gives an exotic air to the luncheon spot. PHOTO BY KEVIN MANNING 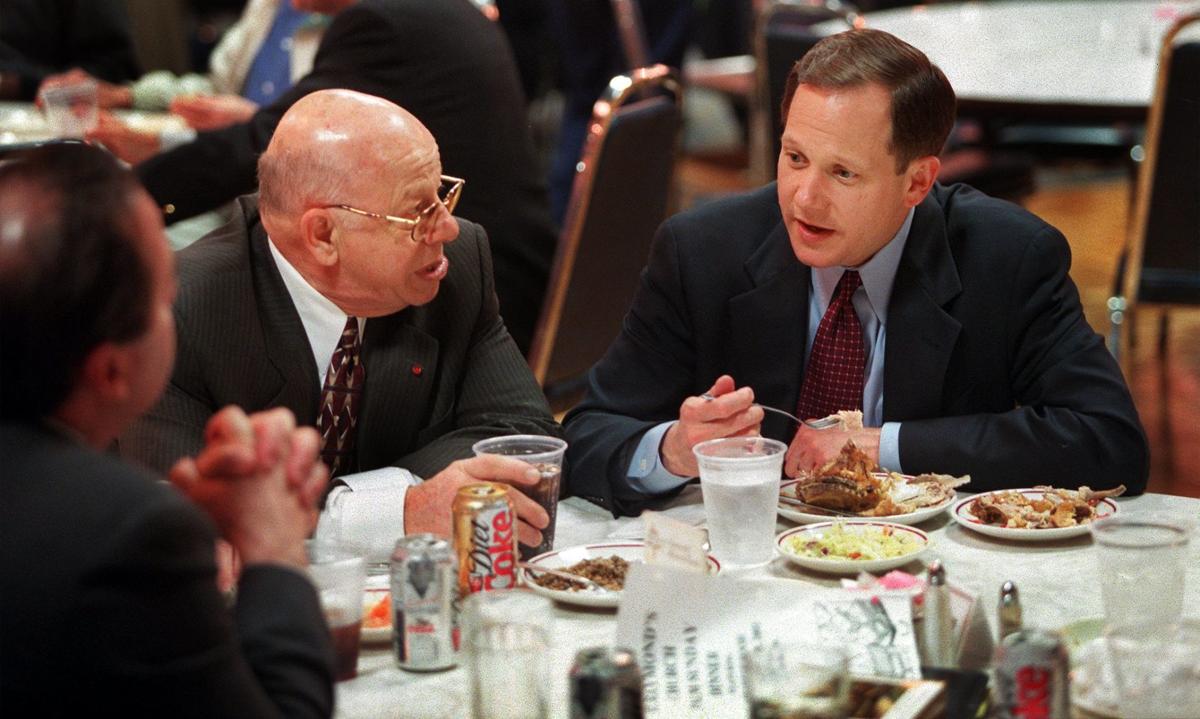