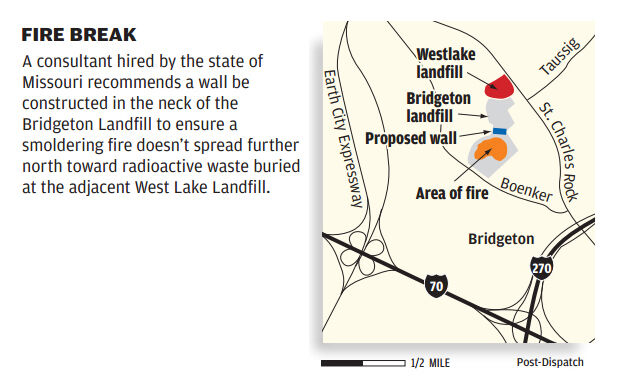 The U.S. Environmental Protection Agency will begin a new round of testing at the West Lake Landfill Superfund site in Bridgeton next week.

Some contractors will be at the site near interstates 70 and 270 this week removing snow so a new core sampling phase of an engineering survey can begin next Monday or Tuesday, the EPA said.

The first phase of the survey, which began in the fall, sent probes in the dirt to detect radiation and was completed in December.

The new round of testing that begins next week will include drilling up to 80 feet in the ground with sonic drilling equipment to bring dirt to the surface. The survey will “examine the area between the Bridgeton Sanitary Landfill and West Lake Landfill to locate radiologically-impacted material that may be present and identify the location for future construction of an isolation barrier that will separate the two landfills,” the EPA said in a statement.

Bridgeton Sanitary Landfill’s owner, Republic Services Inc., is paying to build a dirt-filled trench to keep a smoldering underground waste fire away from the adjacent West Lake Landfill, and the EPA is supervising the work. West Lake was designated a Superfund site in 1990.

“Persons who remain outside the fenced boundaries of the Superfund site will not experience any harmful exposures to radiation as a result of this survey activity,” EPA Regional Administrator Karl Brooks said in a statement announcing the latest round of testing.

This new testing is expected to continue until late February or early March.

“It will all be screened, and any material that detects for radiation will have to be handled in a special way,” said EPA spokesman Chris Whitley.

The Missouri Coalition for the Environment, a St. Louis-based nonprofit environmental advocacy group, said the EPA hasn’t given community members enough input about the testing process. The group is pushing for the Army Corps of Engineers to assume oversight of the cleanup process.

“The entire process has been skewed away from public engagement, and that’s a huge problem,” said Ed Smith, safe energy director for the coalition. His group also wants the radioactive material removed from the site. “It sits in the middle of a major metropolitan region, and it doesn’t belong here.”

Meanwhile, the odor problem that has plagued the Bridgeton Landfill for several months has returned, and the extreme cold weather from earlier this week is part of the problem.

Landfill officials say repairs to the gas extraction system are necessary after the cold weather hampered the system, creating more foul odors from the underground smoldering that is occurring at the landfill. The work is expected to be finished soon.

The landfill is spending millions of dollars to try and resolve the odor problem. Part of that effort involves trying to cap the underground smoldering, and adding 40 new wells. The work to add the wells should be finished by April.

Correction: The original version of this story incorrectly stated the West Lake Landfill is the only site in the country contaminated with nuc…

EPA is working toward a remedy at West Lake Landfill

Residents are buying their own air monitoring equipment.

A report is expected to be released by the U.S. Environmental Protection Agency later this week on the new findings.

Work had been delayed more than two weeks by the federal government shutdown.

Tests required before construction of barrier to protect radioactive material