Fair St. Louis in Forest Park gets off to a smooth start
0 comments
Share this
{{featured_button_text}}
1 of 6 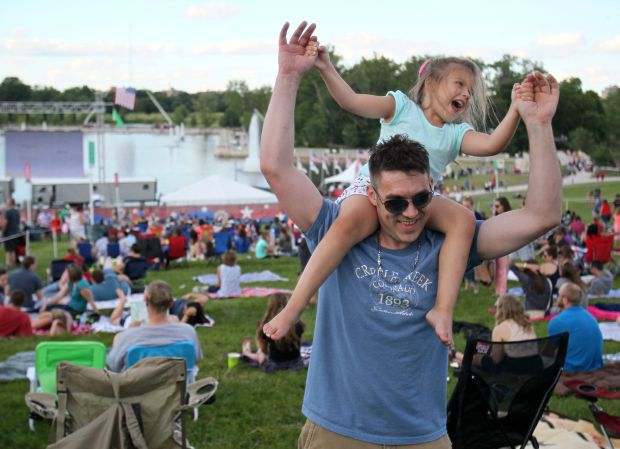 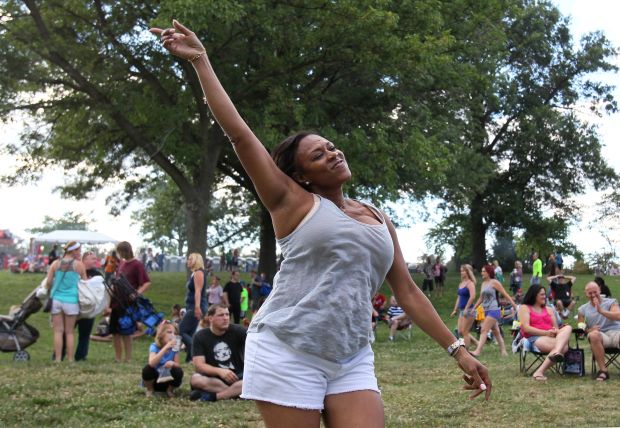 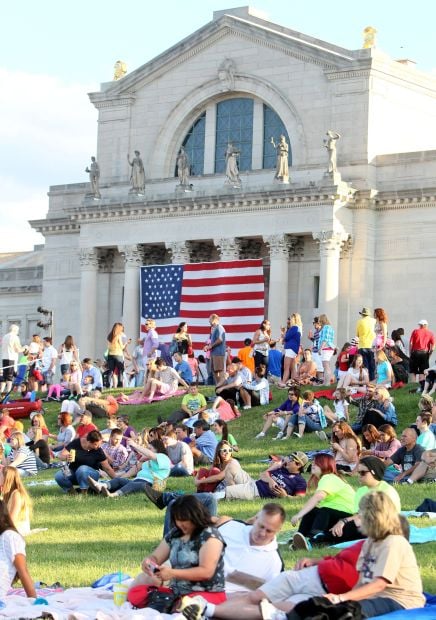 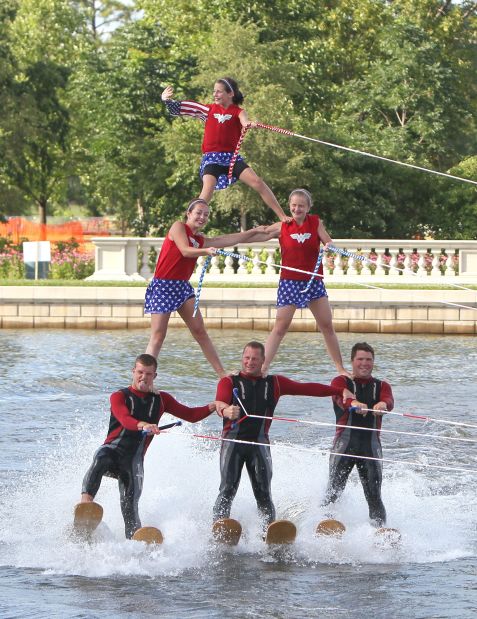 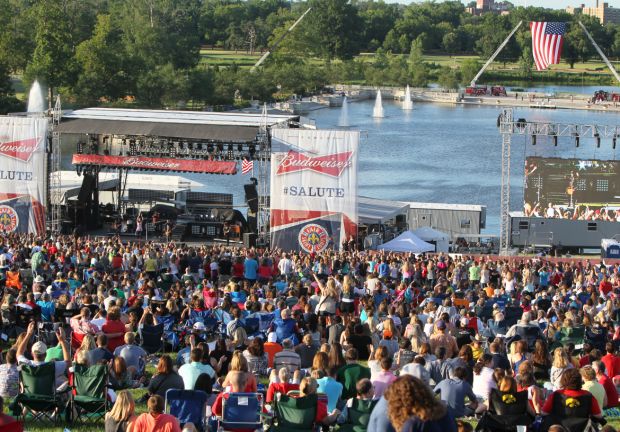 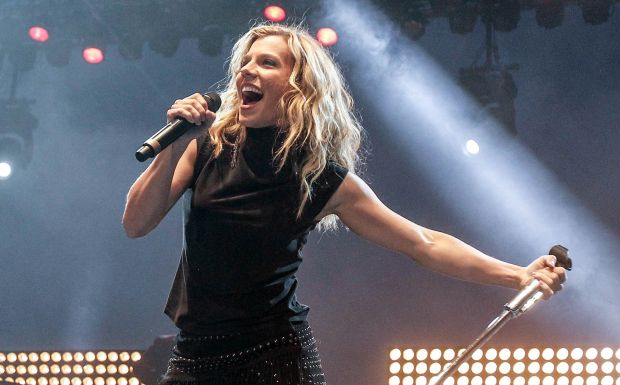 Kimberly Perry, of The Band Perry, performs during Fair St. Louis in Forest Park on July 3, 2014. Photo by Sarah Conard

ST. LOUIS • Fair St. Louis in Forest Park got off to a quiet start earlier this evening, and the crowd that filled Art Hill seemed to get there relatively painlessly as they navigated the routes to the relocated event.

The fair takes over the park this year after being forced to move from its usual home on the Gateway Arch grounds because of renovations under way there.

This evening's fair kicked off at 5 p.m. with music performances and a water show in the grand basin, and will close with a tightrope performance by Circus Flora's Flying Wallendas and fireworks. Gates didn't open until 5 p.m., however, so musicians and water skiers started performing in front of a near-empty Art Hill. But the crowd soon filled the space.

People didn't seem to mind the Arch missing from the backdrop of their fair concerts or fireworks. “I think this is prettier, the view,” said Jeff Dalton, 27, of St. Louis.

Jennifer Hill, 58, of St. Peters, also loved the hill as a concert arena. “The lines aren't bad. It doesn't feel manic. And it looks awesome.”

Fair officials and a police spokeswoman said the first day's festivities went smoothly, with no reports of major glitches or problems.

Katie and Jon Elfin of St. Charles brought their five-month-old baby girl, Avery, for her first Fourth of July celebration. The Elfins said they parked at Washington University at around 6 p.m. and saw some spots still open. They pushed their stroller into the fairgrounds and said they didn't have to wait in line. “We're just really looking forward to seeing the bands tonight,” said Katie Elfin, as a red, white, and blue-decked Avery smiled and clapped to the music.

One family complained that they had to go through a security check a second time after going through one entrance and being redirected through another. Others were upset that they weren't allowed to bring food into the grounds and that the rule hadn't been spelled out on the Fair St. Louis website. The website specifies that coolers and alcoholic beverages aren't allowed but doesn't say anything about food.

Tim and Margie Kohl and their daughter Bridget, 17, have come to the fair from their home near Grant's Farm in south St. Louis County for several years, and didn't want to break tradition and miss the fair at Forest Park. Margie Kohl said the family was a little concerned at first about parking, but parked at Washington University at around 5:30 and had an easy walk over to the grounds. The family planned to stay for the fireworks.

“If the parking is as easy as it was tonight, we may be back,” Margie Kohl said.

The family has memberships to several venues at Forest Park, including the zoo and the art museum, and likes the change of venue. “This is just another great event to enjoy our park,” said Tim Kohl.

Kelly Harrison from Arnold came to the fair with her three children, ages 12, 11, and 9, and her father, Michael Fason, 55, who is in remission after treatments for stage four esophageal cancer. He got out of the hospital two days ago after having a feeding tube put in, they explained.

“This year we wanted to make it special because he was able to come,” said Harrison.

The family rode MetroLink from the Shrewsbury station and called the experience “wonderful,” and not very crowded. The family approved of the venue move as well. “I think it's a great move because this park is so much prettier and the breeze off the water is just amazing,” she said.

Willie Gates, 21, and Cobi Tate, 17, coworkers at the Wildflower restaurant in the Central West End, walked to the fairgrounds from the Central West End and planned to go back to the restaurant afterwards to party. They both sat on Art Hill listening to the music of Thompson Square. “I knew there was going to be a lot of people here, and it's lively, so I'm here,” said Gates, who said he comes to the fair every year. “It is what it is.”

Shahara Mason, 36, and her two children stood on the grass at the west end of the park and watched the burst of fireworks floating down, capping the end of the first day of this year's fair.

Mason of Breckenridge Hills, brought her children to the fair for the first time. She said it felt safe and the family liked the park setting, with families pushing baby strollers, picnickers and bicyclists and at night the excitement of the bands and fireworks.

"It's very nice, and everything was great," Mason said. "We had funnel cakes, lemonade and nachos."

Her daughter was enthralled by the day's brilliant finale.

Mark Matousek of the Post-Dispatch contributed information to this story.

Have pictures you want to share from Fair St. Louis or other local Independence Day celebrations? Email them to bird@post-dispatch.com with yo…

Your guide to Fair St. Louis in Forest Park

Fair St. Louis this year won't include fireworks over the Arch, but organizers are excited about the July Fourth event's temporary home in For…

The fair’s temporary relocation may prove to be a blessing in disguise.

Kimberly Perry, of The Band Perry, performs during Fair St. Louis in Forest Park on July 3, 2014. Photos by Sarah Conard

Kimberly Perry, of The Band Perry, performs during Fair St. Louis in Forest Park on July 3, 2014. Photo by Sarah Conard