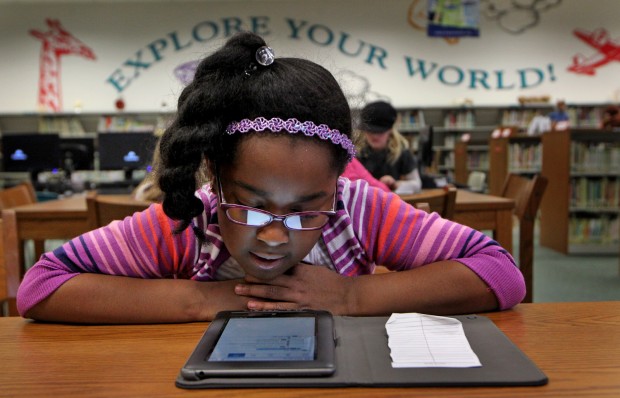 Second-grader Deja Winters, 7, reads the first page of an e-book on a Nook tablet during a orientation session at Long Elementary School in the Lindbergh School District on Jan. 25, 2012. On her first experience with the Nook, Deja said, "it's awesome." Photo by Laurie Skrivan, lskrivan@post-dispatch.com 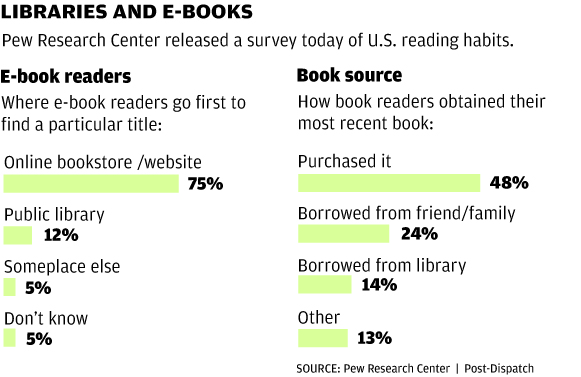 Most U.S. libraries lend e-books, but most people don't know about it: Only 22 percent realize the fast-growing digital format is available, according to a new survey. And even fewer people — 12 percent of e-book readers — have borrowed an e-book from the library in the past year, according to a poll released today by the Pew Research Center's Internet & American Life Project.

"I'm a little surprised," Patrick Wall, director of the University City Public Library, said Thursday when told about the survey.

"Libraries are all trying to educate patrons."

The St. Louis Public Library has hundreds of requests for e-books every month, said Barb Knotts, manager for electronic collections.

In just the past 18-24 months, she said, e-book lending has surpassed the demand for audiobooks. Library card holders don't even have to go to the library to check out an e-book. Most systems allow patrons to download e-books from the library's website.

The Pew survey delves into the tangle of issues libraries face with the evolving e-book world.

• E-books can cost libraries many times what a print book does.

Last year's big summer release, "A Dance With Dragons," by George R.R. Martin, was offered to the University City library at $19.95 for a hardcover, but a single e-book cost $85.

• Popular titles aren't always available at any price. Big publishers are grappling with how to stay in business and sell digital content to libraries.

• Library users want more of every kind of material, but libraries don't have unlimited money and find outdated or confusing copyright laws an obstacle.

• New owners of e-book readers say there is a learning curve, and it may take time before they decide to learn how to borrow digital books.

Sue Rudman of Edwardsville has owned a Nook for less than two years. She knows her library has e-books but says, "You tend to get dependent on having your own stuff on your own reader."

The 46-year-old mother of two has bought 37 e-book titles ranging from genealogy research to vampire novels. She reads several at a time, depending on her mood.

"I like to have my books. If I like a book, I want the option to go back and get it off my (Nook) shelf again."

In the Pew survey, 32 percent of respondents said the e-book title selection at their library was "good." But 56 percent of e-book borrowers said they had tried to get a title only to learn the library didn't carry it.

Often, they don't understand that the library is not allowed to buy a popular title, Wall said.

Of the country's six big publishers, the Random House group has been the least restrictive, but it has raised prices (hence the $85 "A Dance With Dragons").

Libraries are concerned with "just getting a fair deal from publishers and a platform that works for authors, publishers, readers and libraries as well," Wall said.

There likely will be many changes before all of the parties are satisfied, he believes.

The University City library is one of nine independent libraries that make up the Municipal Library Consortium of St. Louis County. Although University City buys its own print books, it, like the other eight libraries, contributes to a shared $50,000 budget for e-books.

Meanwhile, the Pew study found that a large majority of people, 69 percent, say libraries are important to them and their families.

Librarians report that they spend more time teaching patrons how to download books to e-readers, but at least one surveyed didn't think that the emphasis on technology was all that new. "Showing patrons how to use digital content and e-book readers is not much different from showing people how to use the microfilm machine or our public computers except it might take a little more time," a librarian told Pew.

The Pew phone survey was conducted among 2,986 Americans ages 16 and older from Nov. 16 to Dec. 21, 2011. The survey has a margin of error of 2 percentage points. More information on the 80-page report is at pewinternet.org.

The report expects the e-book growth to continue:

"There are over 16,600 library buildings in the nation's 9,000 public library systems in the United States, according to the American Libraries Association, and some 76 percent of them now offer e-books for patrons to borrow — up from 67 percent last year. Though overall use of e-books is still relatively low compared with print books and other types of digital content, libraries across the country have seen significant growth in patron demand for e-book titles, especially new releases and best-sellers."

The American Library Association honored Anne Enright’s novel "The Forgotten Waltz" and Robert K. Massie’s biography "Catherine the Great: Portrait of a Woman" with its new Andrew Carnegie Medals for Excellence in Fiction and Nonfiction.

Keith Taylor's quest starts with a young lady named Alice Gaskell. She left her hometown of Wigan, England, to come to Madison County between …

Before Karen O'Koniewski could warn him, her son, Bryan, 10, pushed a button on the side of an entry in the Edwardsville Public Library's firs…

Until now, people who wanted to examine Madison County's historical court records had to come to Madison County to look at them. Now they can …

Have a question? Text a librarian

Just one more way to get information.

Perhaps to no one's surprise, a new study shows that people who buy a lot of ebooks buy them online rather than through bricks-and-mortar stor…

Bad news this week for libraries that want to continue offering new ebooks to patrons.

Schools are turning heads and pages with their e-books

It came as a surprise to some of Mindy Siefert's students that their librarian was not against e-books.

Second-grader Deja Winters, 7, reads the first page of an e-book on a Nook tablet during a orientation session at Long Elementary School in the Lindbergh School District on Jan. 25, 2012. On her first experience with the Nook, Deja said, "it's awesome." Photo by Laurie Skrivan, lskrivan@post-dispatch.com