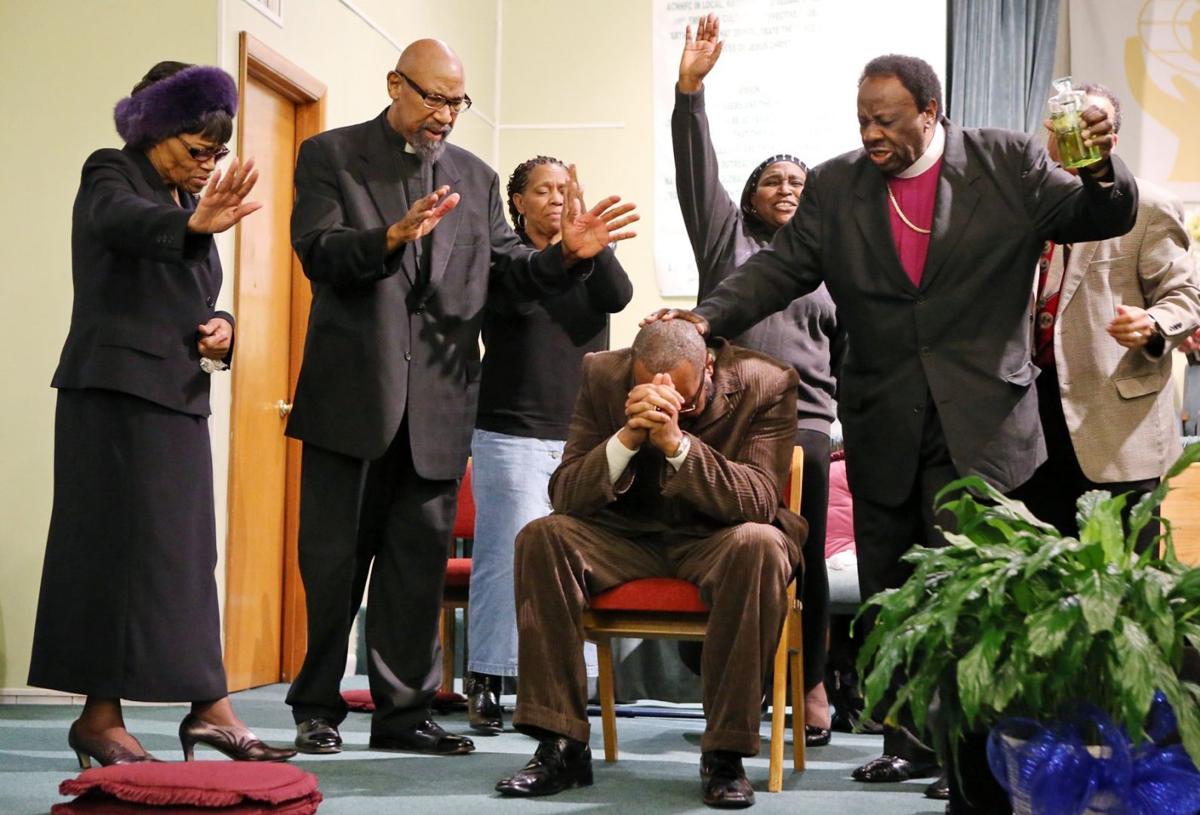 Pastors and others gather around Pastor Charles Ewing, the uncle of Michael Brown, on Monday, Nov. 17, 2014, during a prayer vigil at the All Creation Northview Holiness Family Church in Ferguson. Everyone prayed for strength and peace for the family of Michael Brown. They are from left: Rosetta Watts, Pastor Charles Morgan, Yvonne Martin, Ewing, and Bishop Lawrence Wooten, who was anointing Ewing in the name of the Brown family. Photo by J.B. Forbes, jforbes@post-dispatch.com 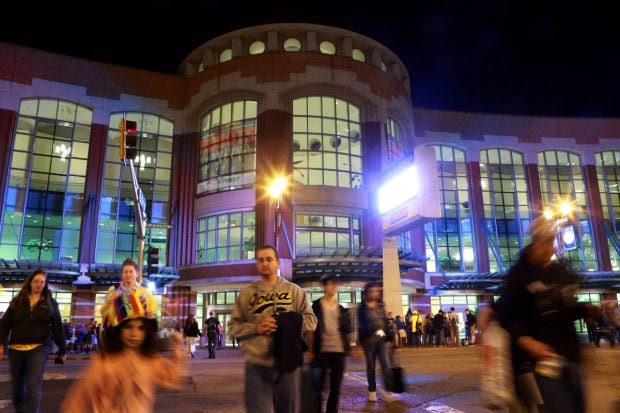 People from around the world exit the America's Center on Washington Avenue during the FIRST Robotics Championships on Wednesday, April 23, 2014. Photo by Christian Gooden, cgooden@post-dispatch.com

For years, the Church of God in Christ, the largest Pentecostal denomination in the United States, has pumped millions of dollars into the St. Louis regional economy by holding its annual convention here.

Now, because of Michael Brown’s death, it’s threatening to stop.

“We feel especially obligated to urge that steps be taken to ensure that there will be justice in the Michael Brown shooting and that necessary systemic changes will be made,” read the letter.

Blake closed the letter by asking for a clarification of Nixon’s plans regarding Ferguson. He also hinted the church was considering relocating its annual conference to somewhere other than St. Louis.

According to Brian Hall, St. Louis Convention and Visitors Commission’s chief marketing officer, the church’s annual convention had led to $98 million in expenditures in the region in the last five years. The church’s last convention, attended by about 28,000, ended earlier this month.

The Church of God in Christ is not the first to express concern about coming to St. Louis in recent weeks.

Parents, for instance, were worried about safety before a downtown cheerleading competition this past weekend, which drew about 15,000 from Minnesota to Mississippi.

Joey Kaegi, director of the Athletic Gold Championship event, said the company received emails over the past week, asking if the competition was still on. A few families, he said, withdrew.

“No one was expecting any situation like this when we were planning this event,” Kaegi said.

In response, the St. Louis Convention and Visitors Commission prepared a letter to parents. “Let us assure you, that your family’s safety is our utmost priority,” it said. Kaegi said the convention beefed up security for the weekend, which went off without a hitch.

Media coordinator Jason West said the agency is preparing alternate routes to get to the Dome and alternate sites for the games, should protests shut down streets. He said the seven games may draw 25,000 attendees.

“The safety of the players and the fans are our main concern,” West said.

And pharmacy benefits manager Express Scripts canceled a conference scheduled in coming days at downtown’s Hyatt Regency. Hotel staff confirmed the cancellation and said the company had reserved rooms for “a large number” of people.

A spokesman for Express Scripts declined to comment. Bryan King, the hotel’s sales and marketing director, denied that anyone canceled events at the Hyatt because of Ferguson-related concerns, but he would not elaborate.

Hall, of the St. Louis Convention and Visitors Commission, says they’ve “had a handful of customers reach out to us to express concern.” He added, however, that the pace of bookings had been good.

“Frankly, if you weren’t aware of the news you wouldn’t be the wiser here in downtown St. Louis,” Hall said, referring to the unrest in the region.

“As for future bookings, the fact is, it’s just too early to tell,” he said.

Bishop Edwin C. Bass, president of Urban Initiatives, the social justice arm of the Church of God in Christ, says its contract with the St. Louis Convention and Visitors Commission ends in 2016 but that no final decisions about where the church will hold its convention after that year have been made.

Bass emphasized, however, that the church “brings big revenue to the community.”

Worldwide, the Church of God in Christ reports having churches in 63 countries and an estimated membership of nearly 6.5 million. The St. Louis area alone boasts about 25,000 members and 150 churches.

Included in Blake’s letter are questions about why the body of Michael Brown was left in the street for more than four hours; why it took so long for Officer Darren Wilson’s name to be revealed; and why a police report has yet to be made public. It also includes a critique of “the militaristic response by law enforcement to individuals exercising their First Amendment right to peaceful protest.”

An examination of the training officers undergo, specifically with regard to the use of force, are among the systemic changes the church is demanding, Bass says.

“When I was a young man, you didn’t hear of these kinds of confrontations,” Bass said. “It seems to me that lethal force is almost the first response.”

Jeff Rainford, chief of staff to Mayor Francis Slay, said he was not aware of Blake’s letter. But if the church is asking St. Louis to examine itself, find common ground, and make real change, Rainford said he agreed.

“We have to open our minds,” he said. “We have a very diverse region. We have to work together collaboratively to make lasting change. It won’t happen unilaterally.”

Samantha Liss of the Post-Dispatch contributed to this report.

EDITOR'S NOTE: An earlier version of this story had an incorrect spelling of Bryan King's first name. The estimated number at this year's COGIC convention was also updated.

St. Louis County police have cut a process that took weeks to only three days.

Church leaders on Friday sent the governor a letter expressing concern about the Michael Brown killing.

At its peak, attendance was about 250, with protesters filling aisles, sides and the back of the gym at Mullanphy School in the city's Shaw neighborhood.

St. Louis Convention Center will keep the annual event at least through 2017.

About 15 members of the Church of God in Christ (COGIC) helped clean the 4th Ward of north St. Louis during their 105th Annual Holy Convocatio…

Letter from COGIC to Gov. Nixon

Pastors and others gather around Pastor Charles Ewing, the uncle of Michael Brown, on Monday, Nov. 17, 2014, during a prayer vigil at the All Creation Northview Holiness Family Church in Ferguson. Everyone prayed for strength and peace for the family of Michael Brown. They are from left: Rosetta Watts, Pastor Charles Morgan, Yvonne Martin, Ewing, and Bishop Lawrence Wooten, who was anointing Ewing in the name of the Brown family. Photo by J.B. Forbes, jforbes@post-dispatch.com

People from around the world exit the America's Center on Washington Avenue during the FIRST Robotics Championships on Wednesday, April 23, 2014. Photo by Christian Gooden, cgooden@post-dispatch.com