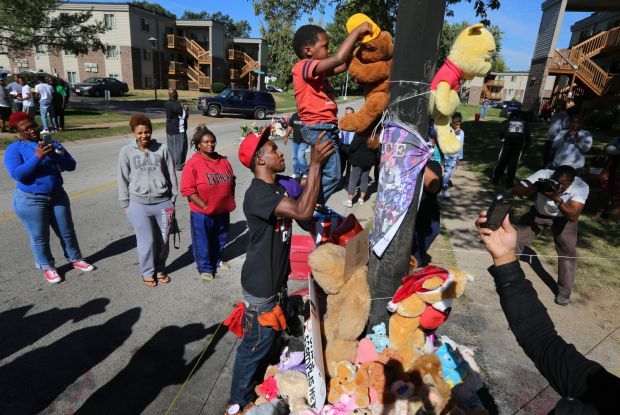 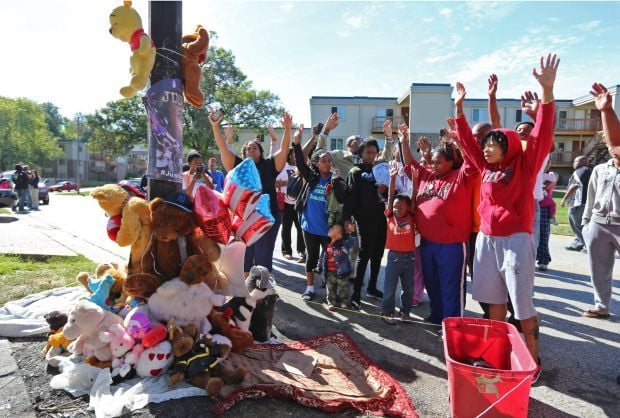 A crowd raises their hands in tribute to the rebuilding of a memorial to Michael Brown on Tuesday, Sept. 23, 2014, after it burned at sunrise. The cause is unknown. Photo by David Carson, dcarson@post-dispatch.com

FERGUSON • The last thing this city needed was another flash point, but it got one early Tuesday when one of two Michael Brown memorials burned.

Like the shooting of a black teenager by a white cop that inspired the shrine, its destruction touched off anger and controversy.

Memorial items had been arranged near a concrete light post along Canfield Drive, where Brown was shot. A larger memorial several feet away, in the middle of the street, where Brown died, was not damaged.

Rumors coursed through an outraged crowd of about 100 who gathered at the scene early Tuesday that an outsider had intentionally set the blaze.

“There is no doubt about it,” said David Whitt, 34, leader of a group of activists who call themselves the Canfield Watchmen. “Someone waited until everyone was asleep and set it on fire.”

Terrell Marshall, of Ferguson, said nothing was amiss when he drove past at 5 a.m., but when he drove by again at 6 a.m., the memorial was fully engulfed.

Markese Mull, 39, who lives in the nearby Canfield Green apartments, said several police cars arrived around 6:45 a.m., and “one cop got out and tried to stomp it out.”

By 8 a.m., the collection of stuffed animals, baseball caps, Michael Brown posters, apparel, votive candle jars and dead flowers was reduced to a heap of ashes.

For weeks after the shooting of Brown by Ferguson police Officer Darren Wilson, burning candles have been part of the memorials. Empty, overturned votive candle jars were lying next to the burn site. Pools of melted wax had hardened around the shrines.

But Whitt and others angrily discounted the possibility that a tipped-over candle was to blame. “There is no way a candle did this; someone used gasoline,” Whitt said.

Others said they had smelled gasoline while the fire was burning.

One resident collected ashes in bags, but Whitt said his group would not allow police to examine the scene. “They had their chance this morning, but they left,” he said. “If they were to come back, they would just say, ‘The scene is compromised now.’

“It doesn’t matter anyway. We don’t trust them. This is our home and we don’t want them here.”

In a press release, Police Chief Thomas Jackson said the cause of the fire is unknown and under investigation. He asked that anyone with information, or photos or videos of the fire starting, contact police.

Once the fire was out, police left. Not another officer was seen until 11 a.m., when Missouri Highway Patrol Capt. Ronald S. Johnson, who had headed security in Ferguson during riots after Brown’s death, arrived alone.

He parked about 100 yards west of the protesters, got out of his car and watched them.

Johnson said that police were investigating a video showing a blue vehicle near the scene at the time the fire started. “We’re attempting to determine how this started and to do everything we can to bring anyone to justice who may have tried to incite trouble in this neighborhood,” he said.

Minutes later, about 20 protesters broke off from the main demonstration and marched toward Johnson, chanting, “Hey hey, ho ho, these crooked cops have got to go.”

By noon Tuesday, residents had rebuilt the shrine with a blanket, a new collection of stuffed animals, T-shirts, flowers and several unlit votive candles next to the soot-stained pole.

About 75 people gathered, joined hands and prayed. They ended by raising their hands and shouting “We are Mike Brown,” and, “We’re young, we’re strong, we’re marching all day long.”

The memorials have attracted a steady stream of visitors since Brown’s death on Aug. 9. Some just cruise slowly past in vehicles. Others park and approach the sites.

Roslyn Howard, 27, and Charisma Alexander, 29, both of Ferguson, visited last week. “She was curious about it, so I said, ‘Let’s stop by and say a prayer,’” Howard said.

They joined another visitor, Lakresha Moore, of Ferguson. The three held hands, bowed their heads and prayed before wiping at tears and returning to their cars.

Earlier, Bill and Ellen Hirzy, of Washington, D.C., took time out from visiting family in St. Louis to pay their respects.

Ellen Hirzy, 65, said, “I woke up this morning and said, ‘I have to get over here.’ I believe in making pilgrimages. At a place like this, you can absorb what happened.”

Like many others who paused or prayed there, her husband was overcome with emotion.

“To think about what happened here,” Bill Hirzy, 78, a retired chemist, said as he dabbed at tears. “There’s a spiritual feeling about this place.”

Mull, who had watched police try to extinguish Tuesday’s fire, said he and his neighbors want a permanent memorial at the scene.

“Instead of a stain on the pavement, Michael Brown needs to be a mark on history,” Mull said.

Like others along Canfield Drive, Mull said he worries about the future of the makeshift memorials.

“This has become a sacred site for people here. We’re afraid the city will send a truck some night and just scrape it off the street,” he said.

Ferguson officials did not return calls or emails for comment.

Capt. Johnson asks for protesters in Ferguson to stand up for peace after violent night

Shots are fired as police cordon off streets to clear protesters. No one is reported injured. At least three protesters are arrested.

The memorial sits by the Canfield Green apartment complex in the Ferguson neighborhood where Brown died nearly five months ago.

A crowd raises their hands in tribute to the rebuilding of a memorial to Michael Brown on Tuesday, Sept. 23, 2014, after it burned at sunrise. The cause is unknown. Photo by David Carson, dcarson@post-dispatch.com