JEFFERSON COUNTY • A bitter battle for control of a rural fire district here reached a boiling point in May with the sudden firing of its longtime volunteer chief.

The tug of war at the district serving about 3,000 residents in areas around Pevely, Festus and Hillsboro has featured mass resignations; accusations of theft, nepotism and revenge; a lawsuit; and complaints to police and the state attorney general.

Darryl Reed, former chief of 33 years, sued the district’s oversight board March 15 alleging that secretary Annette Acre was trying to force him out to replace him with her son, a district firefighter. The suit accuses Annette Acre of violating state open records laws as a part of that agenda by conducting fire district business in secret, failing to keep accurate records and not responding to open records requests. 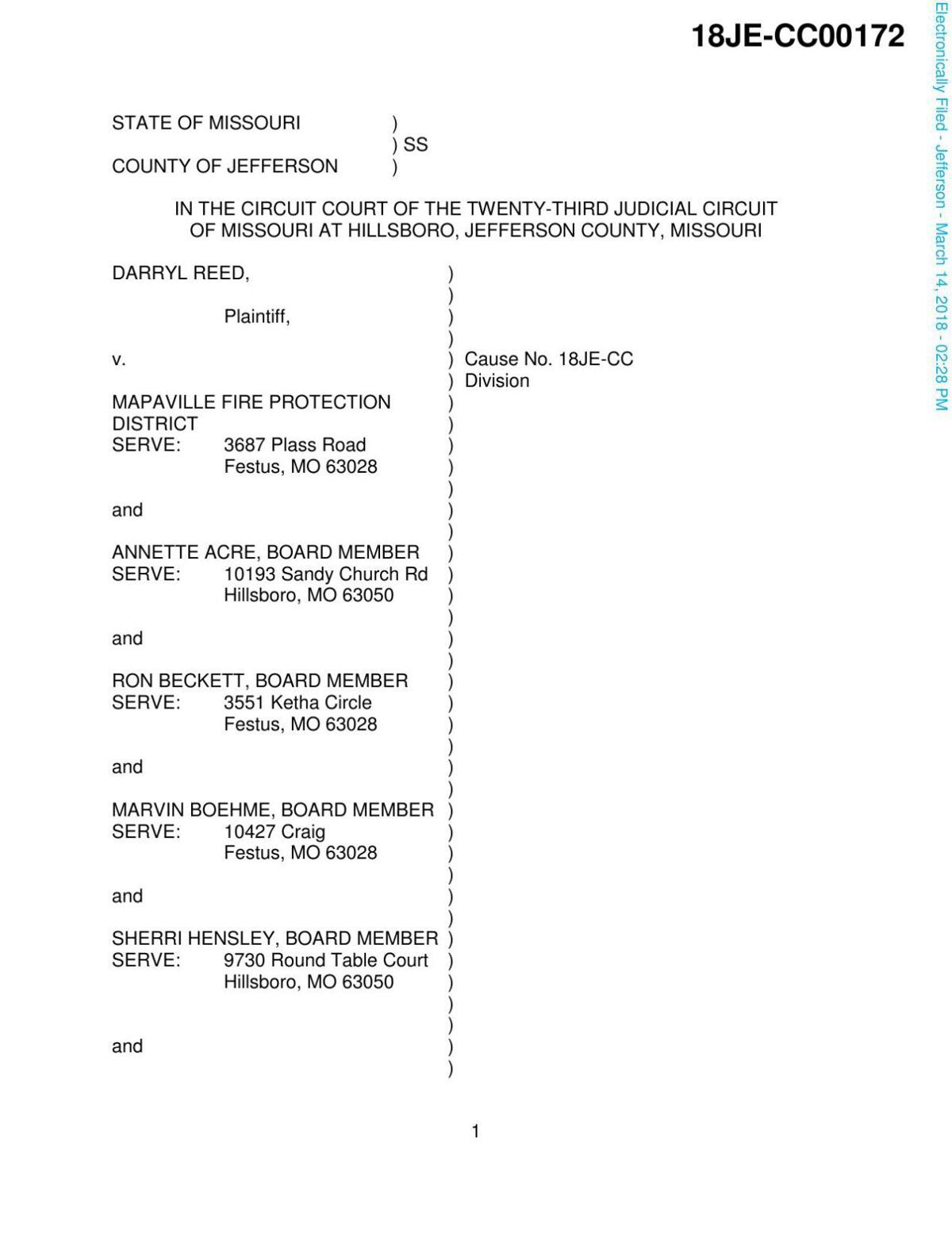 The suit seeks penalties for the alleged violations of open records laws in addition to attorney fees.

Several firefighters, including a full-time employee and cadets in training, quit in protest of Reed’s ouster. They filed a petition Aug. 3 with the county clerk that will force a November vote on whether to recall Acre, whom they accuse of taking revenge against Reed for reprimanding her son late last year for alleged insubordination.

Acre said the board would challenge the recall petition in court. Attorneys for the board did not respond to requests for comment.

Acre said Reed had run the district as a “good old boys club” for decades, and when the five-member board tried to make changes he didn’t agree with, he and his supporters “lashed out.”

What exactly sparked the conflict is unclear. It was Reed who encouraged Acre to accept an appointment in 2014 to fill a vacancy left by a board member who resigned. In April 2015, she was elected to a six-year term. Reed also promoted Jordan Acre, Annette Acre’s son, to lieutenant in 2016.

Tension appeared to have surfaced late last year, after the district, which had been an all-volunteer force, began paying some firefighters in May. The salaries were funded by a tax increase approved a year earlier.

The district employs three full-time firefighters, 17 part-time firefighters and 12 volunteers, said Andy Brown, a former volunteer captain and board secretary who was hired as interim chief. He said the resignations submitted in protest had little effect on the fire district.

‘best chief anyone could work for’

A Vietnam War veteran and retired supervisor at the Metropolitan St. Louis Sewer District, Reed oversaw the Mapaville Fire Association’s establishment as a tax-supported fire district in 2000. Tax increases approved in later years paid for new trucks, equipment and a new $1.6 million fire station that was finished in 2011.

Jeremy Byers, a paid firefighter who quit in protest after Reed’s dismissal, called Reed “the best chief anyone could work for.”

“He’s done everything to make that firehouse what it is,” Byers said. “He treated us like family. He would do anything for you.”

Acre and other board members tried to force through decisions — such as reserving five parking spots outside the firehouse doors for themselves — that went against fire safety measures, former fire Capt. Brad Hartman said.

The disputes between the fire district factions have prompted calls to police.

On Feb. 24, a board meeting was canceled after board president Ron Beckett walked into the firehouse and said he couldn’t breathe. He called police and accused two volunteer firefighters, one of them Reed’s wife, of cleaning the meeting room with ammonia in a deliberate attempt to harm him, knowing he had respiratory problems.

Police found no probable cause for intent to harm.

In his lawsuit, Reed says the cleaning product was Pine-Sol. The suit also claims that after Beckett left, Acre and two other board members went into Acre’s office and discussed official business.

The day after Reed was fired in May, someone on the fire district’s staff called police to report a theft of a little more than $5,000 in equipment, Brown said.

A spokesman for the Jefferson County Sheriff’s Office said Monday that investigators had identified four suspects who were former firefighters with the district, but it was unclear if charges would be filed.

The state attorney general also confirmed that it had gotten complaints regarding how board business has been conducted, but the office could not comment on whether any related investigations were under way.

‘Fired for no reason’

Reed found a letter on his doorstep May 21 notifying him the board had fired him in a closed meeting and ordering him to return his equipment within 24 hours.

The board had given him an ultimatum in December to either retire or be fired, but after he refused to leave, told him he could stay until July, he said.

“Since that December, they gave me hell,” he said. “When they walk in and say, ‘You either retire or you’re fired,’ that causes a little bit of tension, but I’ll be damned if I let someone walk over me.”

Reed said tension with the Acres arose over some hiring decisions he made.

“(Annette Acre) made a statement about 10 or 11 months ago to me saying, ‘Over my cold dead body will you hire this guy,’” Reed said about one of his supporters. “I swear on a stack of Bibles and I saw it with my own eyes, that’s what she said.”

After Jordan Acre stopped showing up in December and didn’t answer his phone calls, Reed sent him a letter ordering him to return the district’s equipment, which included a pair of $5,000 two-way radios. Reed got a letter back in April from the board saying it had approved a “leave of absence” for Jordan Acre.

“I’m sorry, but it doesn’t make sense to me why he could have kept the stuff at home when we could’ve used it,” Reed said. “As the chief I should’ve been informed of what they were doing.”

Annette Acre calls most of the accusations against her “laughable.”

“They are so untrue,” she said.

She said that Reed had run the district as a “one-man show” and that the board eventually decided it was time for change.

“He lost control of the board, and that’s where the problem happened,” Acre said. “We were trying to make it a professional district, not a good old boys club.”

Acre acknowledged that her son had disagreed with Reed on “several issues” but declined to give further details. She said the board had granted her son a leave of absence for two months for what she would only say were “personal reasons.”

Acre did not say why exactly Reed had been fired but said the board had left a letter on his door because he had refused to meet with them.

“We’ve been waiting since at least 2012 for him to retire,” Acre said. “And he didn’t. The situation with Chief Reed in charge was unbearable for everyone. It was time for the board to take action.”

November’s recall vote is the first in the county since at least the 1980s, County Clerk Randy Holman said.

He said the petition forced a special election in which Acre will have to run against other candidates for the remainder of her six-year term, which ends in April 2021.

Acre has filed to be on the ballot; if no one runs against her, she will keep her seat. She said she wasn’t concerned about the vote.

“I think the truth will eventually prevail,” she said. “I think the public will see how they’ve been duped.”

Boy, 14, fatally shot in the chest in St. Louis Saturday

There were 145 passengers on board. One was treated for smoke inhalation.

Plan for Bi-State to take over Loop Trolley hits roadblock

After the transit agency's board fails to endorse the idea, CEO Taulby Roach says he won't do any more on the plan.