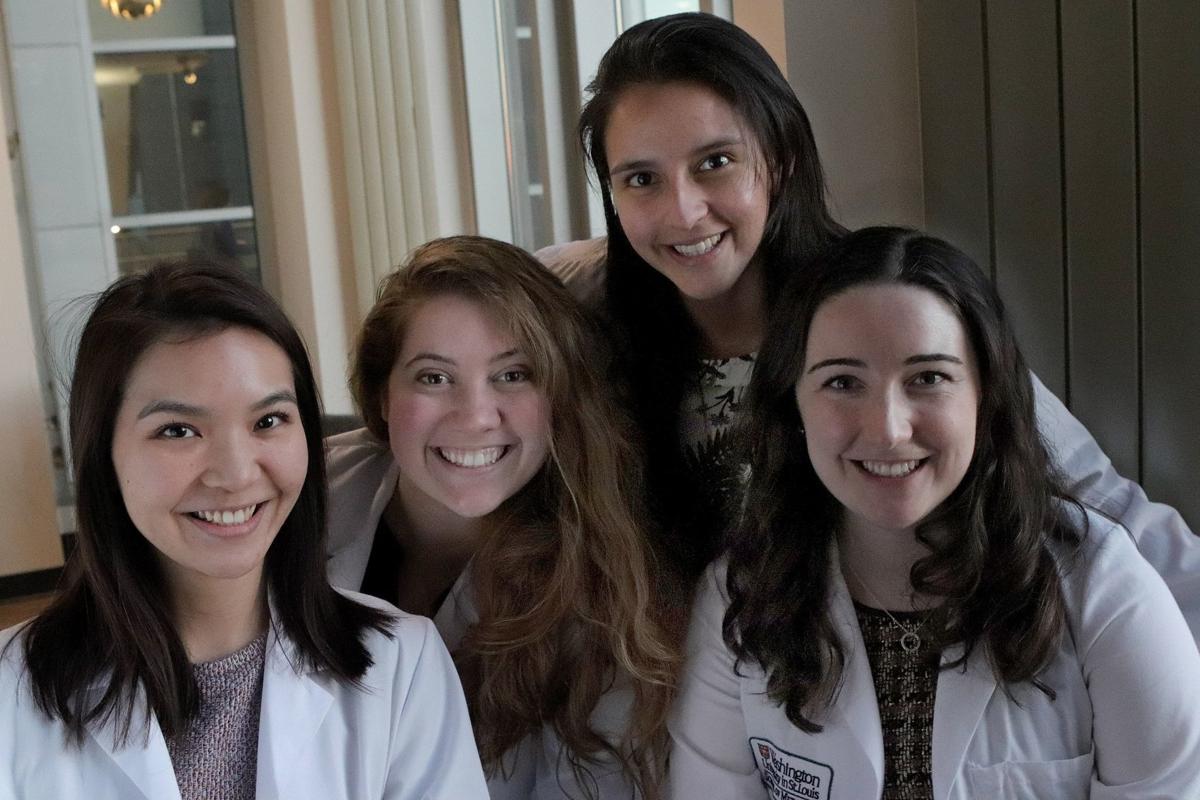 Washington University Medical School students from left, Iris Kuo, Jane Hayes, Tamara Sanchez-Ortiz, and Kate Gerull, plus Maren Loe (not pictured) have started 500 Women in Medicine, a project to promote women in leadership roles. They believe women play a critical role in medicine and for medicine to truly serve the people, it must be inclusive and reflect the true diversity in our society. Photo by Hillary Levin, hlevin@post-dispatch.com 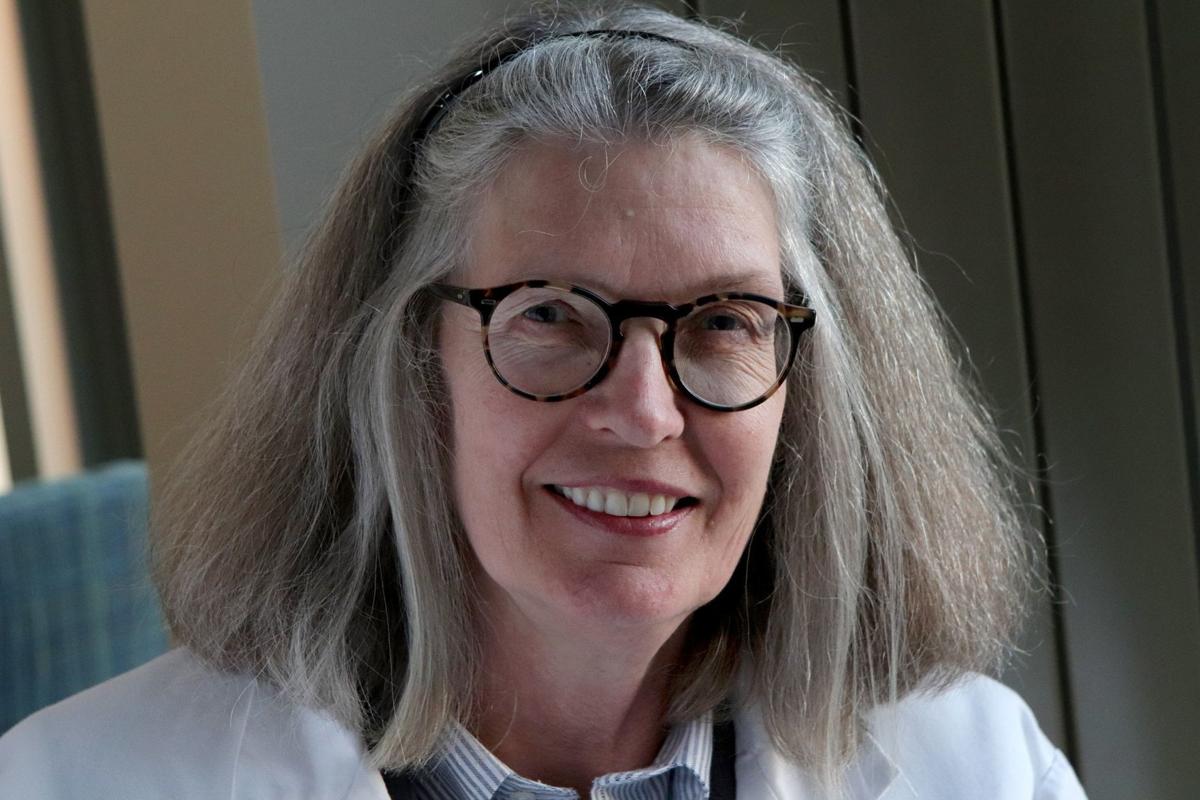 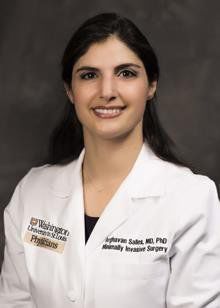 Third-year medical student Kate Gerull has been confused for a flower delivery person and a food worker when she visits patients in the hospital.

“You can’t blame patients in that situation, but it speaks to a broader social issue,” said Gerull, 26, who plans to specialize in orthopedic surgery. “I never saw gender as an issue until I got to medical school.”

Women have made up about half of medical school classes since the late 1990s, but their representation in leadership roles remains disproportionate — 21 percent of full professors, 16 percent of deans and 15 percent of department chairs, according to the Association of American Medical Colleges.

Gerull and four of her Washington University School of Medicine colleagues recently started 500 Women in Medicine, a nonprofit advocacy project to improve visibility and career opportunities for women in health care. They hope to soon launch a database with names of women experts in the field of medicine as a resource for journalists, conference organizers, hiring committees and others.

Jane Hayes, a second-year medical student from Houston, said it struck her at orientation that her male colleagues starting in the same place were more likely to attain higher levels of career success.

“The system isn’t working for us, or women aren’t being promoted,” said Hayes, 25.

It’s known as the “leaky pipeline” — women falling out somewhere along the path to career advancement. It starts with an under-representation of women and minorities on committees making decisions on hiring, speaking engagements and awards, said Dr. Arghavan Salles, assistant professor of surgery at Washington University and an adviser to the project.

“As long as women are outnumbered in leadership, the people who are making these hiring and promotion decisions are going to have in their minds people who look just like them,” Salles said. “It’s not because they don’t like women or want to hurt women, but that’s who is in their mind.”

Salles’ research focuses on gender equity issues in medicine. Her team has uncovered a scarcity of women speakers at medical conferences and bias in faculty evaluations of resident doctors in training.

The faculty evaluations were “more likely to talk about men as being on a pathway to leadership, and for the women there was a little bit more cautionary language like ‘she has potential to succeed,’” Salles said.

In her own practice, Salles commonly encounters patients who ask — after she explains their upcoming procedure — when they will meet the surgeon.

The gender imbalance in medical and science leadership contributes to pay gaps and under-representation in research, while creating a climate ripe for exploitation, Salles said.

The organizers of 500 Women in Medicine, an offshoot of 500 Women Scientists, see parallels between their work and the #MeToo and Time’s Up movements against sexual harassment and gender discrimination in Hollywood and other industries.

More than 40 percent of women medical students experience sexual harassment from faculty or staff, according to a study from the University of Texas. A 2018 report from the National Academies of Sciences, Engineering, and Medicine says universities have not done enough to reduce sexual harassment on campus.

“You cannot have sexual harassment and assault if there is no perceived power difference,” Salles said.

Along with supporting the 500 Women in Medicine project, Washington University is working harder to include networking and career development programs for women and minorities, said Dr. Victoria Fraser, head of the department of medicine who also advises the project.

“There’s an increasing awareness and visibility about the unconscious bias and system structures that can hold women back from leadership positions and recognition and full success in multiple career paths,” said Fraser, one of two female chiefs among 21 academic departments in the medical school.

“In general the literature says that women are less likely to advocate for themselves, less likely to cite their own work and can be more humble and self-deprecating, less willing to negotiate,” Fraser said. “We have to have men and women better understand those differences between genders so we can advance women’s careers.”

When Fraser was in medical school in the early 1980s, about one-quarter of the students in her class were women.

“Women at that time knew that to be successful they had to work harder, be smarter, be more successful, and fit into the culture the way it existed at that time,” she said.

“We did not really focus on women’s issues or on gender or equality. The vast majority of us had male role models who were very committed to our success, who helped us understand what it took to advance in medicine.”

In addition to Gerull and Hayes, the medical students who launched 500 Women in Medicine include Iris Kuo, Maren Loe and Tamara Sanchez Ortiz. They said they also appreciate their male role models and colleagues who support their work toward equality.

“All of us are working for better outcomes for patients, for co-workers and for the workplace,” Gerull said. “Diversity improves all of those things.”

Jobless claims nationwide soar to 3.3 million and explode in Missouri. More calls to free prisoners during the pandemic. The Four Seasons hotel in St. Louis shuts down. Some Illinois community health centers could close because of the virus. These are some of Thursday's developments.

Missouri mobilizes the National Guard to help with the state's COVID-19 response. A St. Clair County woman becomes the first virus death in the Metro East. Lincoln County reports its first two cases. Build-a-Bear closes all its stores. And business columnist David Nicklaus says the $2 trillion stimulus package is unprecedented, but may not be enough. These are Friday's developments.

Be on the lookout: Severe storms could roll through St. Louis this afternoon and evening

Storms should end by Saturday night and yield to a spectacular Sunday with sunshine and highs in the upper 60s.

The Spanish flu infected one-third of the world's population and killed 50 million or more worldwide. But St. Louis suffered less than other cities thanks to efforts to limit spread of disease.

Census estimate say St. Louis’ population dropped last year to just above 300,000 and St. Charles County exceeded the 400,000 mark for the first time. The metro area overall was static in population from 2018 to 2019, with St. Louis County dropping slightly to 994,205.

Fire Chief Dennis Jenkerson said squatters have been known to be inside the building.

Washington University Medical School students from left, Iris Kuo, Jane Hayes, Tamara Sanchez-Ortiz, and Kate Gerull, plus Maren Loe (not pictured) have started 500 Women in Medicine, a project to promote women in leadership roles. They believe women play a critical role in medicine and for medicine to truly serve the people, it must be inclusive and reflect the true diversity in our society. Photo by Hillary Levin, hlevin@post-dispatch.com