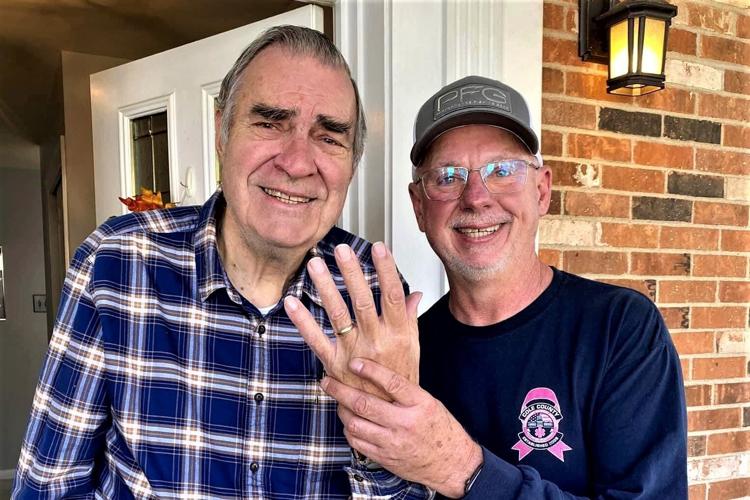 Barry Rolland with Ringfinders, right, returns a lost wedding band to a grateful Walter Tarde, 85, after a nearly three-hour search. Tarde’s wife recently died, and he had lost his ring while bagging leaves in front of his Crestwood home. 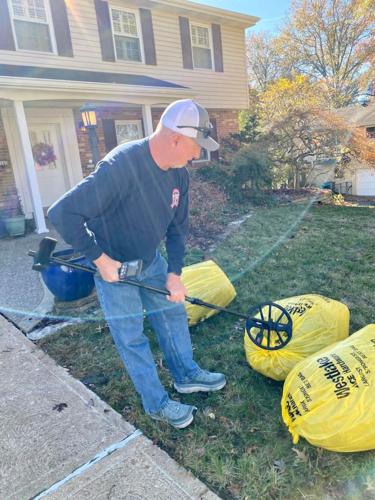 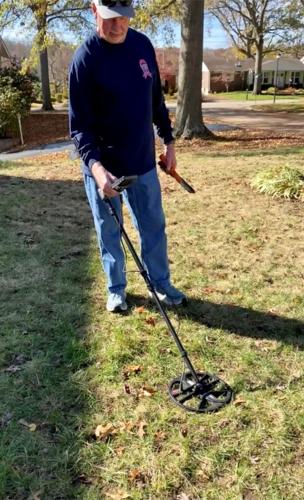 CRESTWOOD — Barry Rolland scanned the 15 bags of packed leaves and the entire yard with his fancy metal detectors, but he still couldn’t find Walter Tarde’s lost wedding band. All he found were nails and pieces of pots.

Audrey Tarde had loved to garden.

She used pots to grow hibiscus, zinnias, pansies and geraniums while living with Walter in their Crestwood home for nearly 44 years.

Audrey Tarde died in June at the age of 83 from cancer. She and Walter Tarde, 85, were married for 62 years.

Rolland, from a group of sleuth detectorists called Ringfinders, had spent more than two hours waving his detectors, often getting on his knees to dig or pull apart blades of grass in search of Tarde’s ring. He even scanned piles of leaves in the street in case it had rolled away.

Tarde’s daughter, Alyson Robinson, helping in the search, would do her best to reassure him.

But she and Rolland were worried. Maybe the ring had rolled into a gutter. Maybe it really wasn’t in the yard, where a grainy photo Robinson took from a distance appears to show him last wearing it.

Audrey Tarde was a science teacher for over 20 years at North Kirkwood Middle, while he was a retired manager at what would become Boeing. They met at the University of Missouri and had two daughters.

Tarde has lost a lot of weight since her death. She was everything to him.

“Wow, the attachment to his wife,” Rolland thought. “I really have to find this for her dad.”

Robinson, 60, of St. Louis, frequently checks on her father. Late Saturday afternoon, she went to help him rake leaves in the front yard. Tarde’s job was to smash the leaves and pack them tightly into the garbage bags.

Right after finishing, Tarde got in the car with Robinson to run an errand. That’s when he noticed.

At first, because of her dad’s memory issues, Robinson was unsure how long it had been lost. But she remembered she had snapped a picture of him while working in the yard to send to her sister. She zoomed in on his hand. It looked like he had the ring on.

Robinson crawled across the yard while it was still light, but turned up nothing. At dusk, they pulled the bags into the garage and began going through them, handful by handful.

Because of how densely packed they were, and the hard veins of the leaves, it took an hour to get through just one.

“It was depressing and overwhelming,” Robinson said. “It was too much for my dad. He was tired and very upset.”

She suddenly remembered an old friend who used to search for lost jewelry in Lake Michigan.

She searched online for “lost ring St. Louis,” and Rolland’s contact information popped up. She texted him about her dilemma, and he immediately texted back.

A woman two hours away in Nebo, Illinois, had already requested Rolland’s help the next day to find a wedding set, but he promised to head to Crestwood first.

Rolland, 63, of Waterloo, picked up metal detecting as a hobby about seven years ago. It was fun to find coins and cheap jewelry on the beach while on Florida vacations with his wife.

After discovering Ringfinders, he upgraded to a more sensitive $1,000 detector.

“To put it to use to help people is kind of a dream,” said Rolland, a paramedic. “Like in EMS, I want to do something for someone that makes them feel better.”

Rolland charges $25 for his time. Grateful and able people usually insist on giving him more.

Rolland said he has gone as far as Jacksonville, Illinois, and Columbia, Missouri, to search for jewelry. He’ll get two to three calls a week, or he’ll go two to three weeks with no calls. Some take five minutes. Others two days.

He has found a ring that had been lost for three years. He’s found a farmer’s ring in a field, and an angry girlfriend’s ring hurled off a balcony.

He’s even been rescued by firefighters after getting stuck on an incredibly steep incline while searching.

When Rolland arrived at Tarde’s home, he waved his large metal detector across each of the 15 bags first. He did not get a signal.

Then he moved on to every inch of the yard. When he would get a signal that sounded like it could be gold, he would use his small, hand-held detector to pinpoint the exact location, pulling away dirt and grass.

When he started running out of options, he asked Tarde to check his pockets and shake out his pants. Check counters in the garage or anywhere he might’ve set it down outside.

“I am two hours into this, and I am thinking to myself, what else can I do?” Rolland said.

Rolland thought maybe because the leaves were so tightly packed, the detector had not worked on the bags. Not wanting to dump them out, he stuck his hand-held detector into each bag and stirred, starting at the bottom.

He got to the 14th bag and heard a sound. Three times, he pulled out a handful of leaves. On the third time, Tarde’s ring got stuck on his thumb.

“Is that my dad’s ring?” Robinson gasped.

“Does it look like this?” he responded, holding it up.

Robinson hugged him. She yelled for her dad, who was searching for his ring inside the house. Rolland met him at the front door.

They embraced among tears and thank-you’s. “I am so happy to bring your wife back to you,” Rolland told him.

Robinson said she thinks she might’ve cried more than she did at her mom’s funeral.

Rolland later sent her a picture of him knee-high deep in a marsh in Nebo, holding an engagement and wedding ring, lost while throwing out duck decoys during a hunting trip.

Doctors warn of health effects of legalizing marijuana in Missouri

One Thanksgiving tradition canceled as St. Louis-area nonprofits scramble to feed the needy

Hundreds of people braved gray clouds and temperatures in the high 40s for the 38th annual Ameren's Thanks For Giving Parade, which featured more than 120 different floats, giant balloons, performances and other attractions from across the region.

The trouble with Coldwater Creek: It’s not just Jana Elementary

The downsizing plan will reduce the number of parishes from 178 to between 71 and 90, according to the latest figures from the archdiocese.

‘She was bold, she was bright’: Teen killed in St. Louis school shooting remembered

The familiar Budweiser sign on I-64 was relit Thursday evening during rush hour after being repaired for more than a year.

Barry Rolland with Ringfinders, right, returns a lost wedding band to a grateful Walter Tarde, 85, after a nearly three-hour search. Tarde’s wife recently died, and he had lost his ring while bagging leaves in front of his Crestwood home.