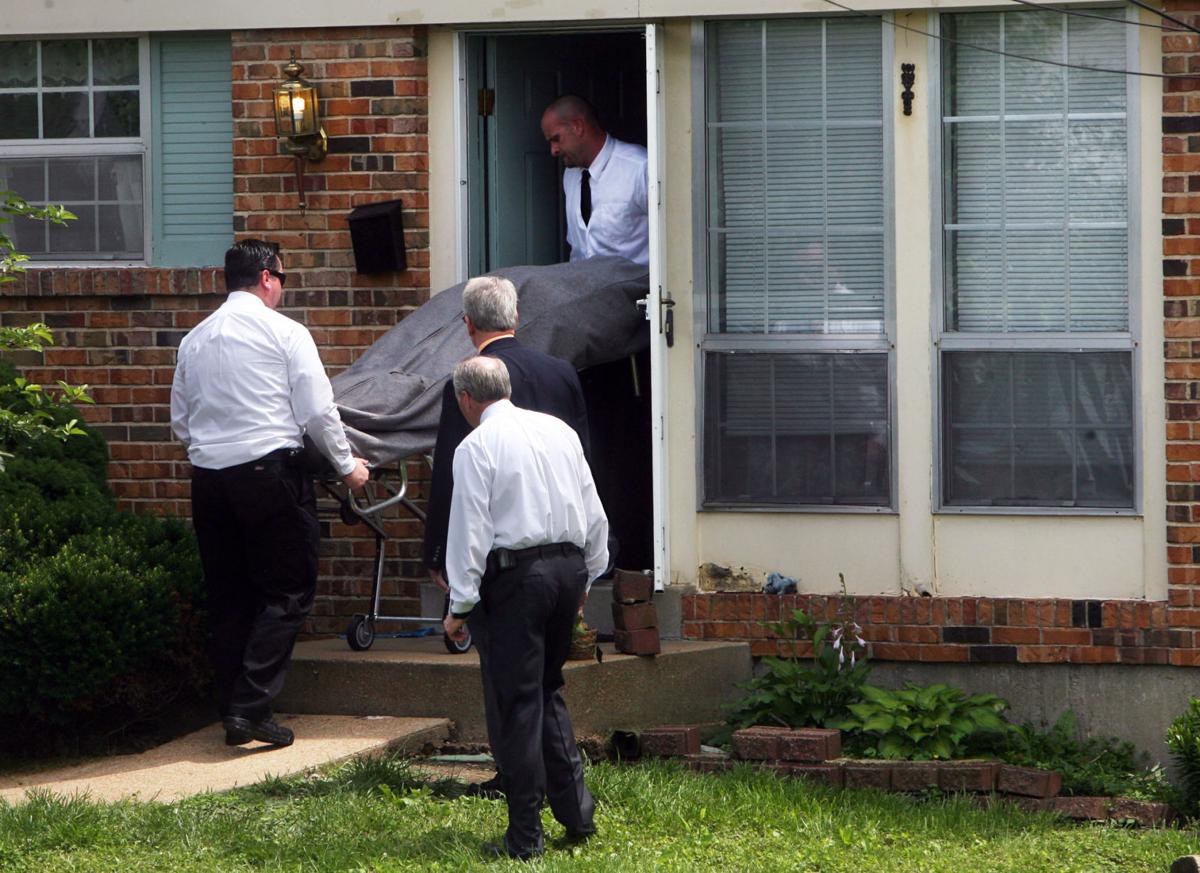 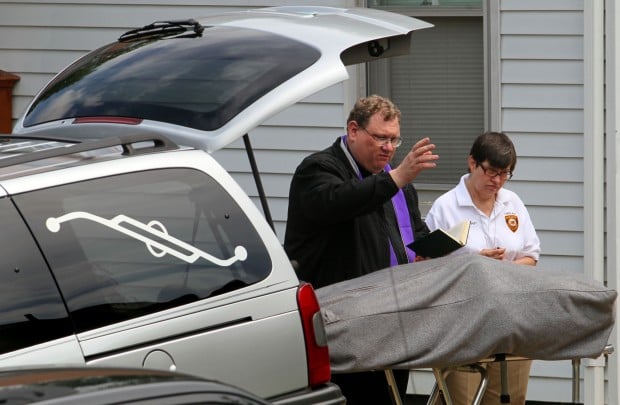 May 27, 2011--- The Rev. Donald Siple prays over one of the bodies found at 5352 Vine Avenue. Photo by Emily Rasinski, erasinski@post-dispatch.com 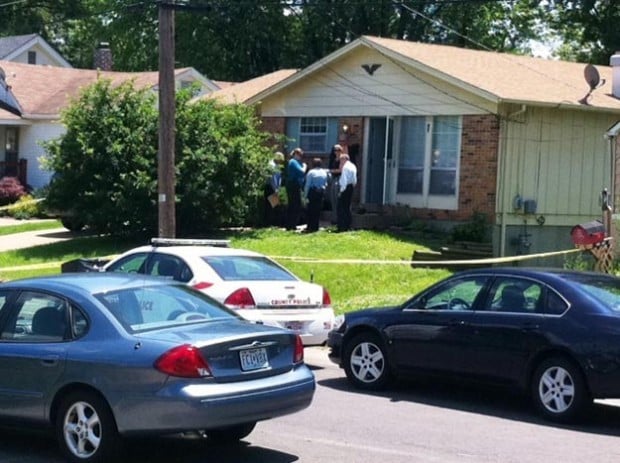 May 27, 2011 -- Multiple adult bodies found in a home in the 5300 block of Vine Avenue, in Affton Friday. Dawn Majors/Post-Dispatch 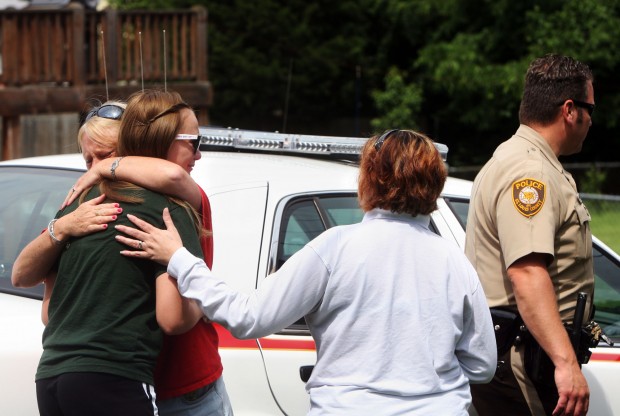 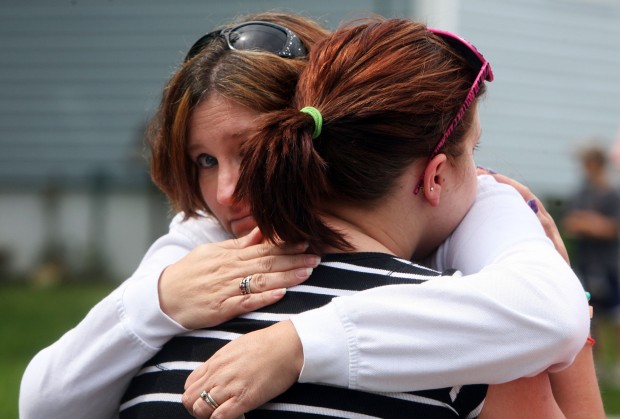 May 27, 2011---Chelsea Clifton (in striped shirt) hugs her mom Vicki Clifton near 5352 Vine Avenue. Chelsea was Emily's best friend. "She had the biggest heart. I don't want her to be remembered as the girl that got murdered. I want people to remember her as the who always had a smile on her face." Emily Rasinski erasinski@post-dispatch.com

AFFTON • Police said the deaths of four people in an Affton house appear to have stemmed from a domestic argument and they are not looking for a suspect.

"We think it was an isolated incident, a domestic incident, that occurred inside the home," St. Louis County police spokesman Rick Eckhard said.

Killed were Dennis Worden, 50, his wife, Dianna Worden, 44, and her children, Brandon Greene, 26, and Emily Dreiman, 18, according to Eckhard.

He would not reveal the apparent cause of death, saying he would wait for autopsies to be performed. He said firearms were found inside the home, but declined to say how many or whether any had been used.

Authorities are not sure when the four died. They were called to the home, at 5352 Vine Avenue, about 9:20 a.m. to check on the well-being of the occupants after family members couldn't reach them by phone.

A neighbor reported seeing Emily Dreiman, who was set to graduate tonight from Affton High School, on the front porch petting a cat about 6:52 a.m. Another neighbor thought he heard several loud booms Thursday night about 10 p.m.

Meckfessel said the two had argued over having guns in the home, especially after a suicide attempt by Dennis Worden.

Other neighbors described the couple living in the Vine Avenue home as happy and said they were often seen walking their dogs through the neighborhood.

"The only problems we ever heard from that house was barking dogs," said neighbor Nance Sutton. "Everything about them was average and normal. Nothing stood out."

'A GIRL WHO WOULD NEVER GIVE UP'

Contacted Friday afternoon, John Dreiman said he didn't know of anything wrong at the home. He said he was planning to attend graduation at Affton High School tonight to see his daughter, Emily, walk.

"She was supposed to call me about tickets today, but she hasn't yet," John Dreiman said before the deaths were confirmed.

He said his daughter had been active in Girl Scouts. She wanted to go to Europe , and planned to go to college, though she hadn't picked a school.

Barb Hegger, a member of the Affton school district's Mothers Club, would see Emily Dreiman at swim meets and her son, a junior, had classes with Emily.

Emily Dreiman had fallen behind in school but worked hard this year to earn the credits she needed to graduate, Hegger said.

"I always thought of her as a girl who would never give up," she said.

The student body is recovering from an earlier tragedy. Over spring break, a student at the high school died in a car crash.

"They kind of all pulled together," Hegger said.

Meckfessel said Greene had graduated from Webster University in 2009. He didn't have a job and moved in with Meckfessel in St. George about a year ago.

"He was real nice," Meckfessel said. "He just couldn't find a job, but he helped me take care of his brother's little girl and he helped me with the house."

She said she dropped Greene and Emily Dreiman off at the home on Vine Avenue Thursday night. They planned to help their mother clean the house up for the holiday weekend.

She said shortly after she got home, she got a strange call from her grandson.

She said she was afraid after the phone call. This morning, when Dianna Worden didn't call and she couldn't reach anyone by phone, another son of Dianna Worden went to check the house. He found his mother's car outside but the door was locked and no one answered. That's when they called police.

Jeremy Greene was at Meckfessel's home Friday along with other family, but was upset and declined to talk to a reporter.

Meckfessel said her daughter met Dennis Worden through a coworker at a hospital about ten years ago. They married about a year and a half ago. None of Dianna Worden's family was invited to the wedding, Meckfessel said.

"Right there I said something was wrong, but she wouldn't listen," Meckfessel said.

She said her daughter supported the family, working at a company called Healthways.

"He hasn't worked since she married him and she was paying all of the bills," she said.

John Dreiman, who lives in Overland, said he had talked to Dianna Worden on Monday. She said Dennis Worden had gone to the country to shoot his guns.

This is a breaking news story. Check back for updates through the day.

Police said Affton family was fatally shot within about 12 hours of bodies being found.

At the scene of Affton tragedy, a garage sale to benefit women's shelter

Jeremy Greene, 27, watched as a mix of strangers and friends emptied the house on Vine Avenue in the Affton area of its belongings.

ST. LOUIS • Police say they do not know what led a man to shoot his wife and her teenage daughter before turning the gun on himself Thursday m…

Ledale Nathan given life terms in prison, plus 75 years, in 2009 crime.

Body of St. Ann woman was found next to her sleeping child

Woman died from gunshot, but her child was unharmed.

May 27, 2011--- The Rev. Donald Siple prays over one of the bodies found at 5352 Vine Avenue. Photo by Emily Rasinski, erasinski@post-dispatch.com

May 27, 2011 -- Multiple adult bodies found in a home in the 5300 block of Vine Avenue, in Affton Friday. Dawn Majors/Post-Dispatch

May 27, 2011---Chelsea Clifton (in striped shirt) hugs her mom Vicki Clifton near 5352 Vine Avenue. Chelsea was Emily's best friend. "She had the biggest heart. I don't want her to be remembered as the girl that got murdered. I want people to remember her as the who always had a smile on her face." Emily Rasinski erasinski@post-dispatch.com
© Copyright 2020 STLtoday.com, 901 N. 10th St. St. Louis, MO | Terms of Use | Privacy Policy
Powered by BLOX Content Management System from TownNews.com.
You don't have any notifications.