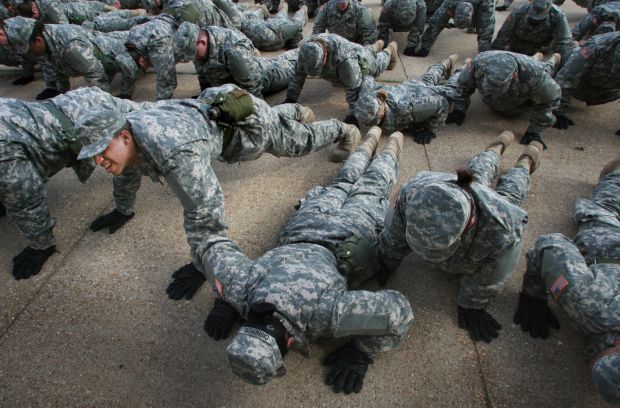 Army recruits do push-ups to the drill sergeant's cadence during basic training at Fort Leonard Wood in 2007. David Carson | Post-Dispatch 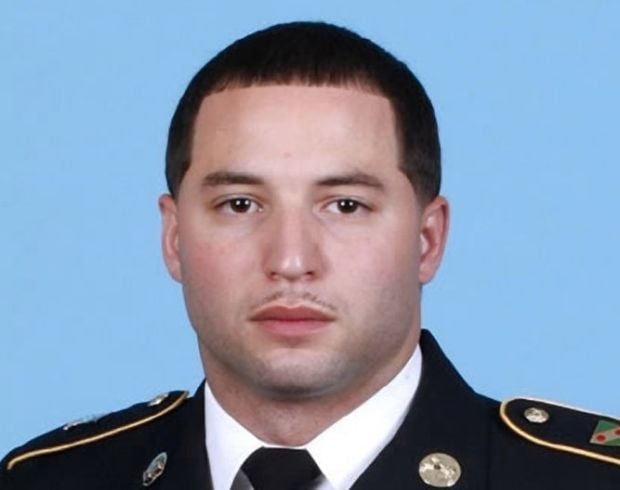 ST. LOUIS • As one of the drill sergeants at Fort Leonard Wood, Army Staff Sgt. Angel M. Sanchez barked orders from under a broad Smokey Bear hat. He was responsible for molding greenhorn trainees into disciplined new warriors.

But several women at the sprawling base in the south-central Missouri Ozarks say he instead added to a legacy of sex abuse that has plagued the military.

Sanchez, 30, faces three charges and 27 specifications of misconduct involving eight women. Some of the most egregious incidents allegedly occurred between mid-September 2013 and January 2014 in the female barracks latrine and drill sergeant office.

At least one woman said Sanchez threatened that she’d be kicked out of the Army if she didn’t engage in sexual acts with him. He’s accused of improperly touching a fellow drill sergeant, as well as other women during floor counts with the “intent to gratify his own sexual desires,” records say.

He’s accused of harassing low-level soldiers, telling one: “When you get to your new unit don’t be a whore, you will be fresh meat.”

Sanchez, who grew up in Philadelphia, also faces allegations from a 2011 deployment to Afghanistan, where he was accused of forcing an Army specialist to have sex with him. Another harassment claim stems from a stint at Fort Richardson, Alaska, between December 2012 and March 2013.

Jaw-dropping reports of sexual misconduct within the ranks have led to outrage and action on Capitol Hill in recent years to reform the military’s criminal justice system.

Of particular note, a sex scandal at Joint Base San Antonio-Lackland showed a culture of untouchable training instructors preying on Air Force recruits afraid to report crimes. Another case in Italy called the entire court-martial process into question after a commander overturned a sexual assault conviction levied against a F-16 pilot who also worked as an inspector general.

Meanwhile, a documentary film about sexual assault in the military, “The Invisible War,” was nominated for an Academy Award.

Publicity about these developments, and the military’s own internal efforts to combat sex crimes, were swirling when Sanchez allegedly crossed a professional line multiple times at Fort Leonard Wood.

When he was officially charged in May, he faced additional accusations that were dismissed after a pretrial, or Article 32, hearing.

“I do believe the government has serious issues with the credibility of witnesses,” he said. “I think that manifested itself in all the charges that were dismissed.”

He said some of the accusers were either facing disciplinary action of their own or forced separation from the military at the time complaints against Sanchez were raised.

“There clearly are some motivations on the part of the accusers that could lead to false accusations,” he said.

The attorney, who has handled other cases like this one around the world, said there is an unfair climate to report claims due to a “political bent on sexual assault.”

“There is almost a war against sexual assault in the military to the detriment of actual fact-finding,” he said. “What you’ve got are a lot of innocent soldiers who have devoted their whole lives to the military. All it takes is a simple allegation not based on any evidence. All of a sudden they are facing the end of a career and the end of their lives having to register as a sex offender.”

There has been a large effort to bring attention to military sexual assault cases in recent years.

While the numbers show most victims didn’t try to pursue justice, many of those who did said they faced retaliation for reporting crimes.

The military says that’s changing. The reporting of sexual assault and rape jumped 50 percent from 2012 to 2013. Officials say that more accurately reflects a willingness to report than a jump in misconduct.

“Sexual assault is a crime that is not tolerated, condoned, or ignored in the (Department of Defense). It is one of the most serious challenges facing our military,” according to the Pentagon’s latest 786-page report on sexual assaults in the military.

• Alleged victims are now assigned special counsel to advise them through the reporting and court-martial process.

• Retaliation against somebody who reports a claim is a crime.

• Alleged victims can no longer be required to testify at a main pretrial hearing.

• The statute of limitations on sexual assault cases has been eliminated.

• Dishonorable discharge is now a required minimum sentence for anyone convicted of a sexual assault.

Sen. Claire McCaskill, D-Missouri, helped push through these reforms. She differed with victim advocates and 55 senators who wanted more radical change to the system that would deny commanders the authority to determine if a case should rise to the level of a court-martial.

“Based on her years of experience as a courtroom prosecutor of sex crimes, she believed that policy would backfire for victims, resulting in fewer prosecutions of predators, and more retaliation against survivors,” spokesman John LaBombard said in a written statement. “The hard data in this area shows that commanders are more aggressive than prosecutors in pursuing cases.”

In the law that passed, there are instead calls for a civilian secondary review if a commander decides that a sexual assault case doesn’t merit court-martial and a prosecutor wants to go to trial. Commanders can no longer overturn convictions, but they can reduce sentences.

“Your boss has no business deciding whether your report of rape deserves its day in court,” Petersen said. “That decision should be left up to legally trained, experienced prosecutors.”

An ABC News/Washington Post poll in 2013 found that 59 percent of people favored the change.

In August, the governor of California signed into law a measure that turns military sex case prosecutions over to local authorities. The law, which goes into effect in 2015, only applies to state guard troops.

The Sanchez case at Fort Leonard Wood comes during an era of significant growth at the base.

Engineering and heavy equipment have long been a focus of training. In the past two decades, there have been major expansions that include specialties in military police and chemical weapons.

Fort Leonard Wood remains as one of only two bases in the country where women can go through Army basic training.

The biggest flare-up there in recent history over sex assaults happened in 1997, when at least a dozen drill sergeants were snagged in an investigation that led to several convictions.

More recently, in 2013, there were seven nonfamily related sexual assault cases, none involving drill sergeants. Not including Sanchez, there have been three cases so far in 2014, one involving a drill sergeant. In that sexual misconduct case, Staff Sgt. Steven Case was reduced to the rank of private and confined for 120 days for having consensual sex with a soldier in training.

The chief of staff on post said sexual assault is an “insider threat” to the military that is taken seriously.

“For all allegations, we actively investigate and discipline violators in a very transparent and public way through our military justice system,” Col. Jay Reckard said in a written statement. “This process balances the rights of the victims with the rights of soldiers accused of the offense. It is a fundamentally fair and just system.”

Sanchez, who is married, began his career in the military as a teenager. He deployed to Iraq in 2005 and Afghanistan in 2011. He finished drill sergeant school in 2013 and is currently assigned to the 701st Military Police Battalion of the 14th Military Police Brigade.

The case is expected to take several days as alleged victims are called in to testify.

“He’s doing fine,” said Sanchez’s attorney, Gapasin. “He is ready for the court-martial. We are going to be prepared, and we are going to move forward.”

The testimony came in the court martial of a former drill instructor on charges of sexual misconduct.

An investigation is sought into details revealed during court-martial testimony.

How a sexual predator operated under the radar at Ft. Leonard Wood

Despite recent reforms to improve reporting, documents show victims of Staff Sgt. Angel Sanchez hesitated to come forward on their own.

Missourians head out to tear down more bases in Afghanistan

National Guard unit will be deployed nine months as military winds down from the longest war in U.S. history.

SPECIAL REPORT: Clearing A Way Out of Afghanistan

Look through our special report about the Missouri National Guard's 1138th Engineering Company and their deployment in Afghanistan, finding an…

Army recruits do push-ups to the drill sergeant's cadence during basic training at Fort Leonard Wood in 2007. David Carson | Post-Dispatch