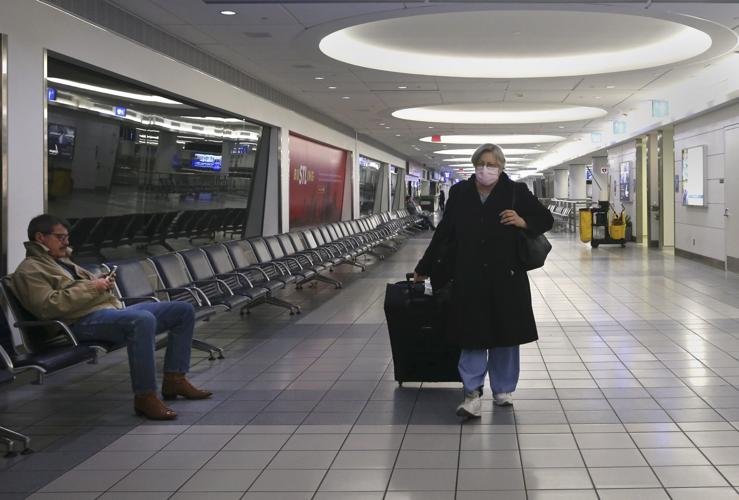 "I have been wearing this mask since I rode the metro this morning to the airport," said Elizabeth Knote of Cape Girardeau, who arrives early afternoon from Washington D.C. on Thursday, March 12, 2020, at Terminal 1 at St. Louis Lambert International Airport. "I have some concerns. I take care of my mother who is 92 years old. I don't want to have to be quarantined,î said Knote, who wears a mask to protect herself from exposure to the coronavirus. At least 23 cases had been confirmed in the District, Maryland and Virginia as of Wednesday morning. Photo by Laurie Skrivan, lskrivan@post-dispatch.com 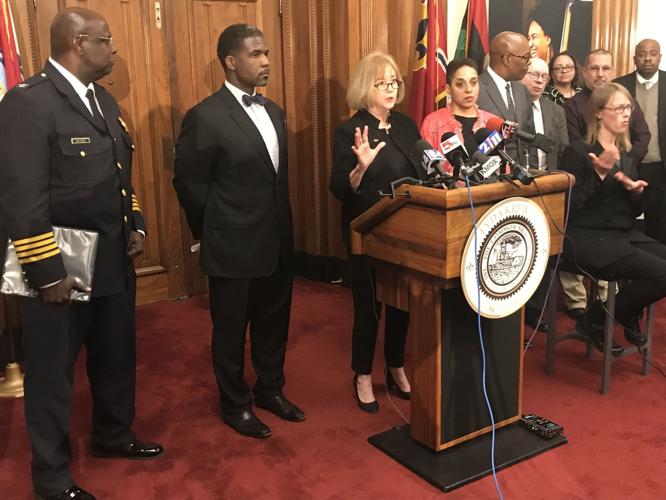 St. Louis Mayor Lyda Krewson and other city leaders initially announced limits on gatherings of more than 1,000 people as COVID-19 spreads in the U.S. and around the world. Photo by Nassim Benchaabane.

ST. LOUIS — Organized events of more than 1,000 people in the city of St. Louis will be prohibited indefinitely to limit the spread of the COVID-19 coronavirus, city leaders announced Thursday.

The ban came shortly before Gov. Mike Parson announced that a second person in Missouri has tested positive for coronavirus, this one in Greene County in southwestern Missouri. A Ladue woman who recently returned to St. Louis County after studying abroad in Italy was the state’s first confirmed case.

St. Louis Mayor Lyda Krewson declared the coronavirus a public health emergency in the city Thursday and said canceling events was necessary to inhibit potential spread of the virus.

Although the city has no confirmed cases, the extent that the virus may be present here is unknown because testing has been limited. The pattern of COVID-19’s reach in other other areas shows “that this virus has been spreading very rapidly,” she said.

”This is a pretty devastating situation for many of our businesses and many of our workers,” she said at a news conference with area public safety and health officials. “We did not make this decision lightly,” she added.

Krewson’s decision mirrors those of leaders canceling large events across the country, including Illinois Gov. J.B. Pritzker who banned all public events with more than 1,000 people statewide for 30 days, beginning Thursday. He urged organizers to call off all gatherings of more than 250 people.

Kansas City Mayor Quinton Lucas also declared a state of emergency Thursday and banned events with more than 1,000 people in his city.

Though the true extent of the virus is not clear because testing has been limited, nationally at least 1,500 people in 45 states and Washington, D.C., have tested positive for the coronavirus, according to a New York Times database; at least 39 patients with the virus have died.

There have been several known cases in Missouri’s neighboring states. Kansas reported four cases of COVID-19 Thursday evening, all in Johnson County near Kansas City and the Missouri border. Illinois had 32 known cases of coronavirus as of Thursday evening, though some patients have recovered since the start of the outbreak.

Fredrick Echols, head of the St. Louis Health Department, said a confirmed case in St. Louis was likely in the near future. “It’s really not a case of if, but when,” he said.

As of Thursday, three people in the city had tested negative for the virus, Echols said. Meanwhile, about 20 people across the city and county have been placed under self-quarantine, he said.

Each person, Echols said, either recently had traveled to an area with confirmed cases, or had been exposed to an individual who tested positive for the virus.

Shortly after Krewson announced the ban, several popular event spaces across the city canceled or postponed dozens of events through April.

Earlier this week, universities across the region called off in-person classes and extended spring breaks. Small events at libraries and businesses have been canceled, as have major ones such as St. Patrick’s Day parades.

The ban set Thursday in St. Louis exempts religious events, as well as regular activities at buildings where more than 1,000 people gather for school or work, Echols said.

St. Louis Public Schools students will take spring break next week as scheduled, said Public Safety Director Jimmie Edwards. If the break is extended, the city has plans to provide meals to children who depend on school breakfasts and lunches.

Krewson on Thursday morning directed the city water department not to shut off water to any business or residence for the next 60 days to ensure people will be able to wash their hands as recommended by public health officials. The order does not affect billing.

The city also placed hand-washing stations throughout downtown St. Louis on Thursday for those without access to soap and water, she said.

The actions are among a list of precautionary measures carried out by St. Louis police and firefighters, jail supervisors, courts officials and health workers in coordination with schools, businesses and institutions. Regional cooperation included activating the Unified Health Command, an emergency response task force across 18 area jurisdictions prepared to respond full time to coronavirus outbreaks.

The city’s jails will limit visits to two days a week, Edwards said. But inmates will only be allowed sit-down visits with their attorneys, he said.

City courts will remain open for now, with a focus on more high-profile cases, said Presiding Judge Rex Burlison. Residents are expected to show up for jury duty if they have a summons, though potential jurors will be asked if they have any symptoms similar to COVID-19. Those without symptoms will be separated at 6-foot intervals in the courthouse, and the courthouse will be deep cleaned.

Fire Chief Dennis Jenkerson said paramedics would ask callers a series of questions to determine not only a patient’s risk for the virus, but also the risk to themselves. The department has been getting eight to 10 calls a day from people exhibiting symptoms of the flu, he said.

“We’re not going to rush into the home and touch somebody to feel how warm they are,” he said.

Jenkerson sought to reassure St. Louis residents. The department is looking for evidence of residents contracting coronavirus; ambulances and paramedics are well supplied, he said.

“The city is prepared for this,” Jenkerson said. “I am very confident … we will get through this.”

Today, in order to be proactive and protect and safeguard the health and safety of the public, @STLCityGov and @CityofSTLDOH are declaring a public health emergency and are prohibiting events with attendees in excess of 1,000 people until further notice. #COVID19

Travellers taking precautions from exposure to the coronavirus

• Edward Jones canceled 15 events at the company’s sites through the end of May.

• The Fabulous Fox Theatre postponed performances and tours through March 31.

The Convention and Visitors Commission was working closely with partners and clients affected by the city’s event ban, spokesman Anthony Paraino said. The organization promotes conventions and tourism in St. Louis and St. Louis County and runs America’s Center Convention Complex, which includes the Dome at America’s Center.

”At Explore St. Louis, our first priority is the health, safety, and well-being of everyone visiting or attending an event that is held in our community,” Paraino said in a statement. “We certainly understand and respect the decision by the City of St. Louis in restricting large events of 1,000 people.”

Taylor Tiamoyo Harris of the Post-Dispatch contributed to this report.

Crowd begins to gather at St. Louis sports bar for crucial US soccer game vs. Iran

Venue owners don't expect as large of crowds as Friday's US match against England, during the Thanksgiving weekend, but say the must-win game Tuesday will still draw many supporters.

“It was remarkable to see a naturally occurring physics lesson,” said John Grass, after seeing what looked like the world turned upside down.

Soccer fans across the St. Louis region rejoiced Tuesday as the U.S. beat Iran 1-0 and advanced to the World Cup's round of 16.

US soccer has a secret weapon v. Netherlands: A St. Louis leadership pro

Travis Thomas, a consultant for St. Louis University's men's soccer team and a former Principia College player, is in his third year as the U.S. national team's leadership and team dynamics coach.

A few days ago, Kamenetzky read that Szapszewicz's family had lost almost all its belongings in this summer's flood. Kamenetzky called his museum coworkers immediately.

The shooting was reported at 1:38 a.m. on the 400 block of North 10th Street, according to police records.

The rehabbed Midland Boulevard bridge over I-170 will reopen Saturday; it has been closed to traffic since June.

"I have been wearing this mask since I rode the metro this morning to the airport," said Elizabeth Knote of Cape Girardeau, who arrives early afternoon from Washington D.C. on Thursday, March 12, 2020, at Terminal 1 at St. Louis Lambert International Airport. "I have some concerns. I take care of my mother who is 92 years old. I don't want to have to be quarantined,î said Knote, who wears a mask to protect herself from exposure to the coronavirus. At least 23 cases had been confirmed in the District, Maryland and Virginia as of Wednesday morning. Photo by Laurie Skrivan, lskrivan@post-dispatch.com

St. Louis Mayor Lyda Krewson and other city leaders initially announced limits on gatherings of more than 1,000 people as COVID-19 spreads in the U.S. and around the world. Photo by Nassim Benchaabane.