Getting the mail after dinner? You're not alone.
0 comments
Share this
{{featured_button_text}}
1 of 2 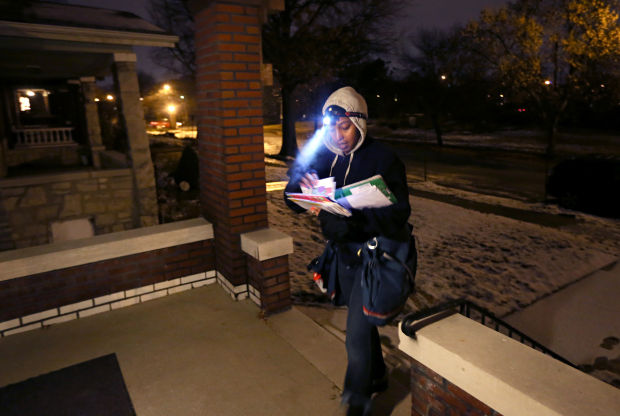 Ashley Chestnut delivers mail to a home in the 3100 block of Geyer Avenue in the Compton Heights neighborhood of St. Louis on Friday, Dec. 13, 2013. Chestnut finished her deliveries on the route at 6:41 p.m. Photo By David Carson, dcarson@post-dispatch.com 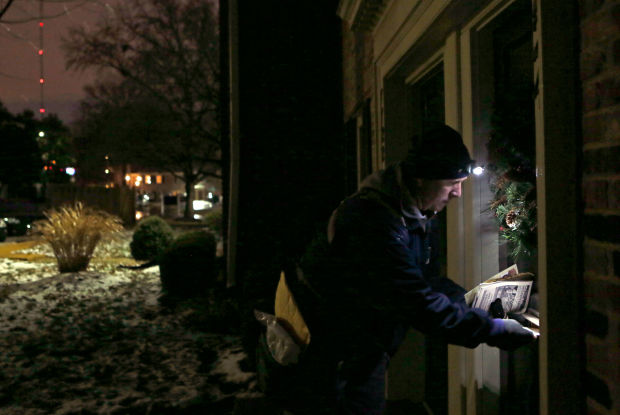 Letter carrier Michael Mooney delivers mail to an apartment in the Georgetown Apartment Complex in St. Louis County on Friday, Dec. 13, 2013. Mooney finished with his mail deliveries for the day at 5:18 p.m. Photo By David Carson, dcarson@post-dispatch.com

Sylvia Titgemeyer once knew when to expect her mail carrier ambling up the steps of her century-old home in south St. Louis.

Not that she could set her clock by it, but at least there was a general time frame – late morning to early afternoon.

These days, however, Titgemeyer, who lives in the Tower Grove Heights neighborhood, can’t say when the mail will show up.

The week before Thanksgiving, Titgemeyer noticed the mail didn’t arrive until after 9 p.m.

The carrier sometimes doesn’t even wear a uniform.

“As best I can tell, we don’t have a regular carrier,” she said.

The struggles of the Postal Service in the Internet age have been well-documented — high legacy labor costs, a decline in volume and burdensome congressional mandates.

But now the effects seem to be more acute, especially for customers, some of whom report that they are getting their mail later than ever.

“We’ve been short-staffed,” said Valerie Welsch, a spokeswoman for the Postal Service’s Gateway District. “It takes several months to go through the hiring process.”

The region’s postal service has seen a 43 percent increase in volume this month, Welsch said, much of it packages that take longer to deliver.

Welsch said the postal service recently hired 145 employees to ease the load, and some are still learning the ropes.

The carriers not wearing uniforms were likely newer employees who don’t receive money to buy their postal blues until their probationary period is up.

Last summer, Richmond Heights resident Corrine Patton noticed the mail wasn’t showing up until well past 6 p.m. Then every so often, she wouldn’t receive any mail at all for a day.

Now she worries she could be liable if her carrier trips on her property in the dark.

“I’m paranoid about getting the lights on,” she said.

The late deliveries have become such a concern nationwide that the Postal Service’s Office of Inspector General launched an audit to study the issue a few weeks ago, said Agapi Doulaveris, a spokeswoman.

That audit was partly prompted by the death of Tyson Barnette, a Maryland letter carrier who was gunned down by an unknown assailant on Nov. 23 while making deliveries well after dark, Doulaveris said.

Locally carriers said that for years now they have been forced to work longer hours in sometimes dangerous conditions. Some said they don’t understand how the postal service was saving money in light of all the overtime it was paying employees to work longer hours.

“Everybody is complaining,” said Dan Pittman, business agent with the National Letter Carrier Association, the union that represents carriers. “We are all sick and tired. We do not like to work after dark, especially in unsafe neighborhoods.”

William Lister, president of St. Louis area’s NLCA’s branch, said carriers are also picking up their mail from the processing facility later in the day.

In past years, carriers could pick up mail around 6 a.m., and head out for their deliveries. Now they can’t pick it up until well after 8 a.m., Lister said.

Welsch said that change is because the Gateway District now processes mail from a larger area. To accommodate all the trucks coming in and out of the processing center, “some mail goes out later than it did,” Welsch added.

The switch from daylight saving time also compounds the problems.

Lister said whatever the cause, delivering mail in the dark slows everything down. Some carriers are forced to use street lights to read addresses.

“It’s a recipe for disaster,” Lister said. “There are some high crime areas where we don’t want our employees. They hear someone at their door at 7 p.m., and they don’t know whether it’s someone trying to break in or the mailman.”

But it’s not just residential customers that have been affected.

She said she’s had problems with the mail arriving well after normal business hours for the past year.

“We’ve complained,” she said. “We are a business and we deal with legal issues.”

But despite Sullivan’s complaints, things haven’t gotten any better, she said.

Titgemeyer’s livelihood also depends on getting documents on time. She’s an immigration lawyer who works from home.

She has yet to complain. She doesn’t know it would do much good.

“I don’t know there’s much to be done, as they are trying to save pennies,” she said. “I have to at least give them some credit if they are finishing the mail that late at night.”

Lance Cpl. Drew Weaver was killed Feb. 21, 2008, during a combat operation in Iraq

Across the pond, an example of how to do postal reform right

Ashley Chestnut delivers mail to a home in the 3100 block of Geyer Avenue in the Compton Heights neighborhood of St. Louis on Friday, Dec. 13, 2013. Chestnut finished her deliveries on the route at 6:41 p.m. Photo By David Carson, dcarson@post-dispatch.com

Letter carrier Michael Mooney delivers mail to an apartment in the Georgetown Apartment Complex in St. Louis County on Friday, Dec. 13, 2013. Mooney finished with his mail deliveries for the day at 5:18 p.m. Photo By David Carson, dcarson@post-dispatch.com