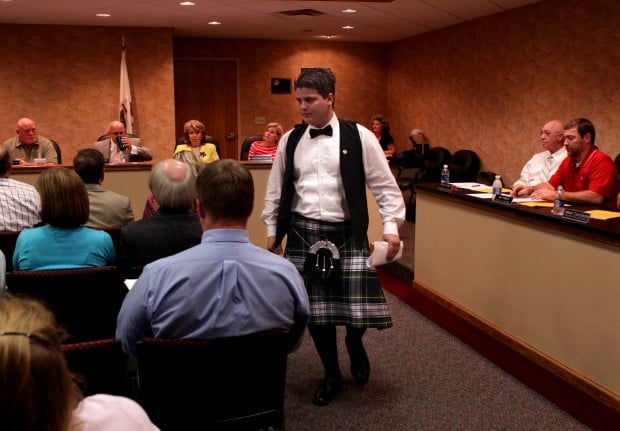 William Carruba, 19, returns to his seat after asking the Granite City School Board on Tuesday March 27, 2012, to lift its restriction on wearing a kilt to prom. Photo by Christian Gooden, cgooden@post-dispatch.com 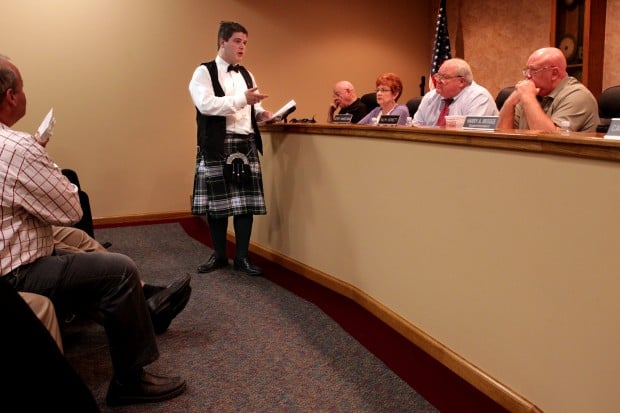 William Carruba, 19, makes his points before the Granite City School Board on Tuesday, March 27, 2012, that he should be allowed to wear his kilt to this year's prom. Photo by Christian Gooden, cgooden@post-dispatch.com

GRANITE CITY • A Granite City High School senior doing research on his family's Scottish heritage purchased a kilt made out of the family's tartan and decided the garment's coming out party would be at the senior prom.

School officials, however, said no.

William Carruba was denied again Tuesday by the Granite City School Board, where he had turned in hopes of having the school's denial reversed. Officials there said kilts are "nontraditional" and that they do not fit into the district's dress code.

"I understand full-heartedly," Carruba, 19, said of the board's decision after the meeting. "I'll just ... wear pants."

Superintendent Harry A. Briggs told the 65 people in attendance that the denial was not simply about the kilt.

"We must adhere to our (dress) policy," Briggs said. "To do otherwise would be reckless on our part."

While he said he respects the tradition of the kilt, Briggs, who said he is of Scottish-Irish heritage, said normal attire must be worn to school functions.

"It's not what we call normal wear," he said of the kilt, adding that "attending the prom is a privilege, not a right."

Carruba said his idea for the kilt began in the fall. Carruba, whose mother is of Scottish-Irish heritage, began looking into getting a kilt made out of the Gordon tartan, a sort of plaid pattern of blue and green, with yellow lines throughout. The garment arrived several weeks ago.

Carruba's prom date, Emily Nelson, said she was excited that he had decided to wear the kilt. Her love of Scottish culture is a bit different. It derives from a crush on Scottish actor Gerard Butler.

"I was excited because I knew he had wanted to do it for a while," said Emily, 16, a sophomore.

Then Carruba asked permission from school officials to wear the kilt to the prom, which didn't go as planned.

The denial has caused an outcry online, with people taking to blogs and social media to decry the decision. The dust-up has been fueled by allegations, affirmed by Emily, that Principal Jim Greenwald had said men should dress like men at the prom.

"There's nothing unmanly about a kilt," Carruba said.

Greenwald, who was at the meeting, did not comment.

Briggs said any allegations that Greenwald questioned the masculinity of the garment are untrue.

Carruba attended Tuesday's meeting in his new kilt, completing the look with a white tuxedo shirt, black vest, green socks and a sporran, the pouch many kilt-wearing men sport around their waists. He apologized for the attention the issue has brought the school, then said he wanted to wear the kilt to honor his family.

"One of my great-grandfathers came to this country in the 1700s for freedom," he said. "Saying I can't wear my kilt ... is a pronouncement that I cannot honor my family."

Some in attendance Tuesday night had come to support Carruba's cause, including Scott Rae of Hazelwood. Rae said he was bothered by a message he read on the social networking site Facebook about the denial.

"To say real men don't wear kilts offends me," said Rae, who also donned a kilt for the meeting.

It's not the first time wearing a kilt to a school function has been an issue. In 2005, a senior at Jackson High School in Jackson, Mo., was told to change out of a kilt at a school dance, resulting in outrage from across the world. The School Board there later issued a written apology to then-senior Nathan Warmack and gave permission to wear kilts at future dances.

Seven ways to save on prom dresses

1. Think Classic--The first lesson in frugality is versatility, meaning the more often you can wear something, the better value you receive in…

A group of Cinderellas who plan to go to prom may select their special dresses this weekend.

Keys to a great prom look

For a great prom look, Kelly Kossakoski of MAC Cosmetics suggests that you start with eyes and apply your foundation and concealer later. You'…

A kilt shouldn't be called a 'frock'

Granite City High School student William Carruba can't wear a kilt to prom. Our story today called a kilt a "frock," which wasn't the right wo…

From 2005: Scottish group backs student who wore a kilt

From 2005: Kilt-lovers rally around student

William Carruba, 19, returns to his seat after asking the Granite City School Board on Tuesday March 27, 2012, to lift its restriction on wearing a kilt to prom. Photo by Christian Gooden, cgooden@post-dispatch.com

William Carruba, 19, makes his points before the Granite City School Board on Tuesday, March 27, 2012, that he should be allowed to wear his kilt to this year's prom. Photo by Christian Gooden, cgooden@post-dispatch.com