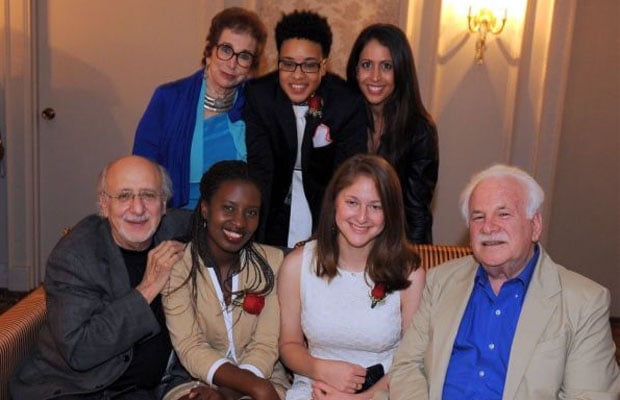 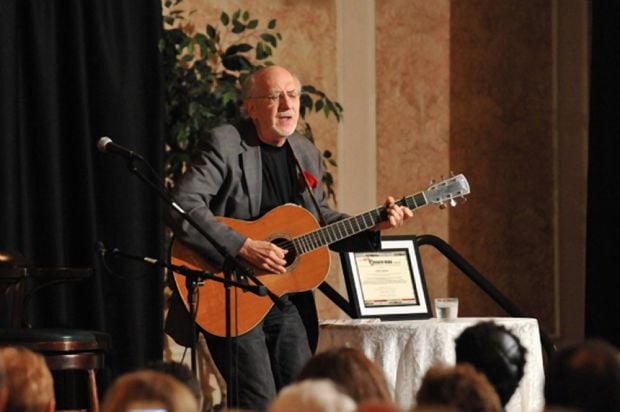 Singer Peter Yarrow performs at the first HateBrakers Awards in May.

Susan Balk never expected to come face to face with a man who spent much of his life as a white supremacist.

But last month, she did.

Balk interviewed him for HateBrakers, the organization she founded with the seemingly impossible goal of helping people overcome hate — hate between races, cultures and even schoolchildren who bully each other. It’s based on the premise that people can change, and she has found many people who have.

Once the head of a skinhead gang, Pearl said he wanted to tell his story to young people so they wouldn’t do the same with their lives.

Balk, of Creve Coeur, founded HateBrakers in St. Louis in 2010 to work with students, educators and the public to find ways to halt acts of hate here and around the world. The idea is to find good role models to show others how to counterattack violence, bullying, racism, scapegoating, revenge and genocide.

Balk said she has met people who, despite their painful experiences, “have found the moral courage to transform themselves and become healers, leaders and heroes instead of haters themselves.”

HateBrakers spotlights these people as role models and heroes. They tell their stories on the HateBrakers website, hatebrakers.org.

“We know from research that people’s behavior is influenced by role models,” said Balk. “We’re trying to provide them with tools to change.”

HateBrakers’ heroes are people like Olive Mukabalisa, 25, a survivor of the Rwandan genocide. By the time she was 6, both of her parents had been murdered. “I lost my entire family — my parents, some siblings, cousins, aunties, uncles, grandparents and friends were killed in the genocide,” Mukabalisa said.

With the help of Lawrence Jehling, also a HateBrakers hero, she was brought to St. Louis to study at Webster University. Last spring, she completed her master’s degree in international relations.

“The wounds of genocide are not completely healed; I wish they could, but once in a while they open up and start bleeding again; however life goes on,” said Mukabalisa, who is the executive producer of “The Rwandan Night,” a film about the stages of genocide. “We can only hope it does not happen again.”

Graie Barasch-Hagans, another HateBrakers hero, grew up in north St. Louis amid violence, gangs and poverty.

“I don’t think that you can be black in America and live without experiencing hate in some way,” he said. “You go into a store and people follow you around the store.”

Undeterred, he went to college, taught at MICDS and in New Orleans and served in Americorps. He’s now working on his master’s degree in public policy at Rutgers University.

Hero Suzanne Yatim Aslam, 28, a Christian Palestinian-American, experienced bullying as a child after 9/11.

One classmate spit on her and told her to “go back to your own country.” Another classmate said no one should get her mad or “she’ll fly a plane into your house.”

“It’s not easy being Palestinian living in America,” she says in a HateBrakers video.

Rather than becoming bitter, she dedicated herself to social justice.

She has worked in the Middle East with Christian and interfaith groups to help children. She now works with the nonprofit notMYkid in Phoenix.

“I try to inspire children to make positive life choices through my own story,” she explained.

HateBrakers is continually looking for powerful stories and people to spotlight.

“The more first-person stories we can get, the more we can hit the brakes on hate and stop the predictable cycles of hate breeds hate,” Balk said.

Heroes may be victims, witnesses or even perpetrators, like the former neo-Nazi Pearl, who is turning his life around.

In May, Hatebrakers gave out its first Heroes Awards. One went to Peter Yarrow of the folk singing group Peter, Paul and Mary. Yarrow started the children’s program Operation Respect. Another went to the Delancey Street Foundation in San Francisco, which is helping Pearl.

HateBrakers also makes presentations to community groups and has school programs, a Facebook page, an exhibit on hate crimes at the St. Louis Holocaust Museum and Learning Center and a book.

Balk got the idea for HateBrakers while working on “Vienna’s Conscience,” a book and exhibit of her late husband’s photographs and interviews about the Viennese conscience in the aftermath of Nazism. The exhibit has traveled from St. Louis to Shanghai, San Francisco and is now at the United Nations center in Vienna.

Balk, who has written books and edited and written for national magazines, said that she and her late husband, Richard Winter, “used to always talk about how hate can take over an entire culture but also how a young Catholic family in Austria hid his aunt and uncle during the whole Nazi time. How do people get that moral courage?”

Balk gets help with HateBrakers from several people including her current husband, Kenneth Balk.

“I really believe that everybody has some kind of HateBraking story,” Bradley said.

“Just because you’re a certain way or people put labels on you — like you’re a bully or did something mean — doesn’t mean you can’t change,” she said. “All people need to do is communicate to break down the barriers between people.”

ST. LOUIS • In April 2011, four teens attacked a 72-year-old Vietnamese immigrant and his wife as they walked home from a market in south St. Louis.

Singer Peter Yarrow performs at the first HateBrakers Awards in May.