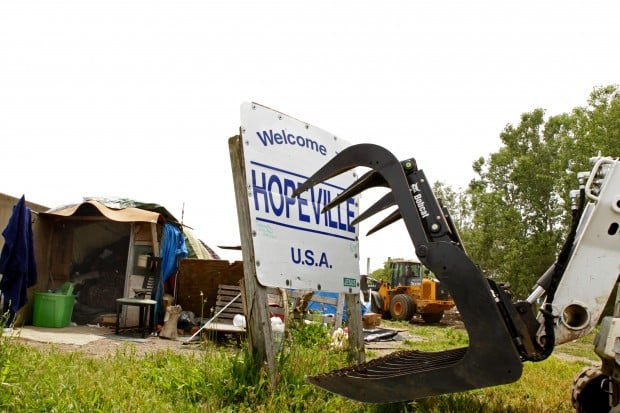 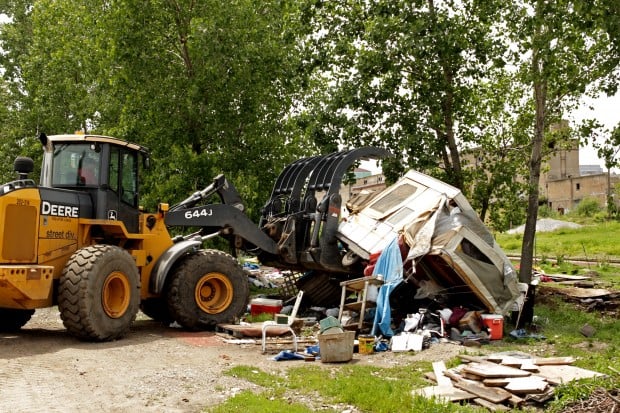 ST. LOUIS • As the rumble of Bobcats and a massive front-end loader approached Hopeville on Friday, Antoinette Triplett, who heads the city's homeless services division, scuttled through the riverfront encampment in high-heeled shoes, looking for one last hold-out.

"Have you all seen Angelo?" she yelled to a group of people gathered to see the homeless camp cleared.

She hurried past a torched shack, past makeshift showers, past a sea of litter, to Angelo's tent. He was gone and had left a new pair of sneakers and other belongings.

"We've been trying to reach him all week," Triplett said, walking back to a safe spot on the sidelines. "He's probably the most severe case that we have."

Hopeville was the second of three riverfront camps the city plans to clear by May 18. The first, Dignity Harbor, was bulldozed last week. Officials said they have offered housing vouchers to residents of all the camps so they can stay in hotels and apartments.

Hopeville, the largest of the camps, formed in 2010 when people were forced out of a tunnel system under Tucker Boulevard that was filled in for a new street. Dozens of homeless people lived in Hopeville in tents and shacks. The city wants to clear the camps because of health and public safety concerns.

People like Angelo, the last man to leave Hopeville, represent the challenges of working with the homeless, even if there is housing available.

Shortly before officials like Triplett arrived Friday afternoon, Angelo slept in a chair, near a firepit. A caseworker made a last-ditch effort to work with him. Then Angelo walked away and was last seen headed toward downtown on North Broadway. He was wearing a black winter coat on a hot day and talking to himself.

"You can't help what you don't know," said Richard "Wolf" Mattson, 42, a former Hopeville resident who said Angelo liked to be left alone. "You can only do so much for someone."

Many people who lived in Hopeville had more than their fair share of struggles, said Tom Burnham, who runs a shelter for Peter and Paul Community Services. Walking through the camp Friday before the destruction began, he said he had mixed feelings about its fate.

On the worst days when he used to visit he said it was like the "Lord of the Flies." Other days, he said, it was "downright pleasant."

He expected many of the former residents to benefit from the housing vouchers, but he thought a handful of people would wander back to the streets or be evicted from apartments. The people, he said, "have little or no insight into their (mental) illness."

Attorney Mark Schulte, who owns property near Hopeville, applauded city leaders for razing the camps but said the tent communities have been a 'shame" on St. Louis because so many people ignored the homeless.

Although the city is clearing away the riverfront camps, the Rev. Larry Rice vows to open a new one. He said he will dedicate "Integrity Village," a 2-acre camp on private property at South Vandevender Avenue and Interstate 44, near the Missouri Botanical Garden, on Monday.

Rice, in a press release, said the new camp will be modeled after "Dignity Village" in Portland, Ore., and will be "a religious community where all faiths and all people are welcome."

Location off I-44 draws immediate fire from residents, officials.

So Larry Rice is making good on his plans to open a new tent village for the homeless. The city has said it won't tolerate it, so now it's a w…

Larry Rice is among four arrested as homeless camp is cleared

A handful of homeless residents opted to leave prior to police officers arriving on the scene.

ST. LOUIS • The plywood shacks of Dignity Harbor were no match Friday afternoon for a scrum of Bobcats and a front-end loader fitted with a ma…

Homeless advocates in St. Louis, once allies, are now rivals

The differing positions of Larry Rice and William Siedhoff will be in public view today.

The camps, just north of downtown, primarily existed under the radar until 2010, when a tunnel system under Tucker Boulevard was evacuated.