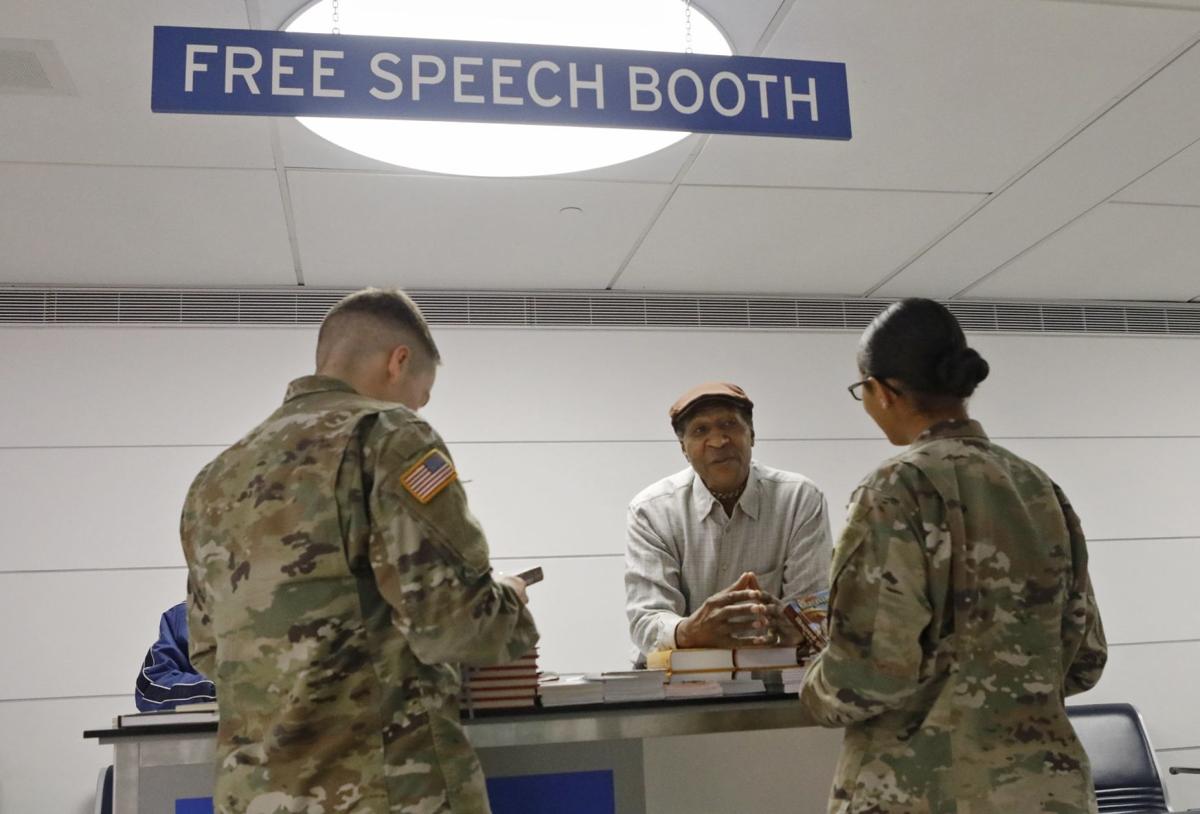 Gregory Brown, 66, greets two soldiers, who declined to be identified, on Thursday, Dec. 19, 2019, at a free speech booth at St. Louis Lambert International Airport. Brown was offering travelers books and pamphlets on Hare Krishna for a donation. Photo by J.B. Forbes, jforbes@post-dispatch.com 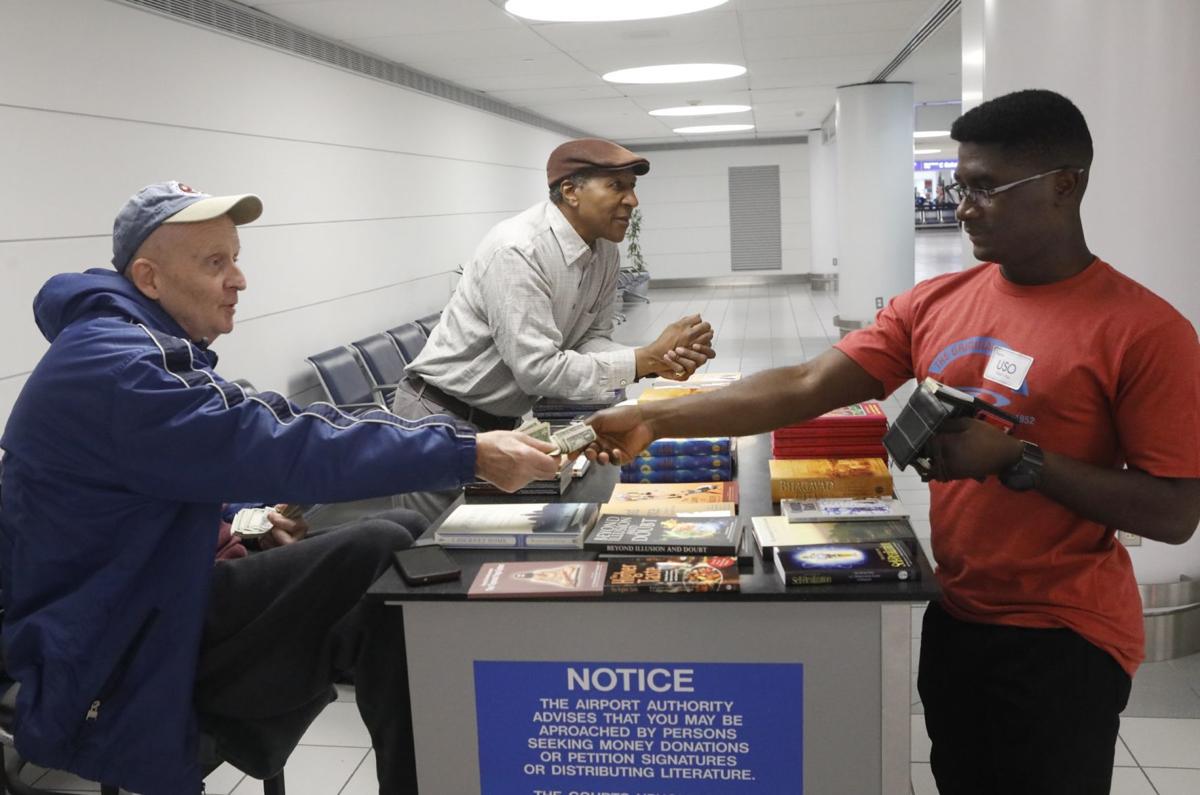 Charles Ryskamp, 70, at left, gets a donation from a soldier on Thursday, Dec. 19, 2019, at a free speech booth at St. Louis Lambert International Airport. Ryskamp and Gregory Brown, 66, center, were offering travelers books and pamphlets on Hare Krishna for a donation. Photo by J.B. Forbes, jforbes@post-dispatch.com 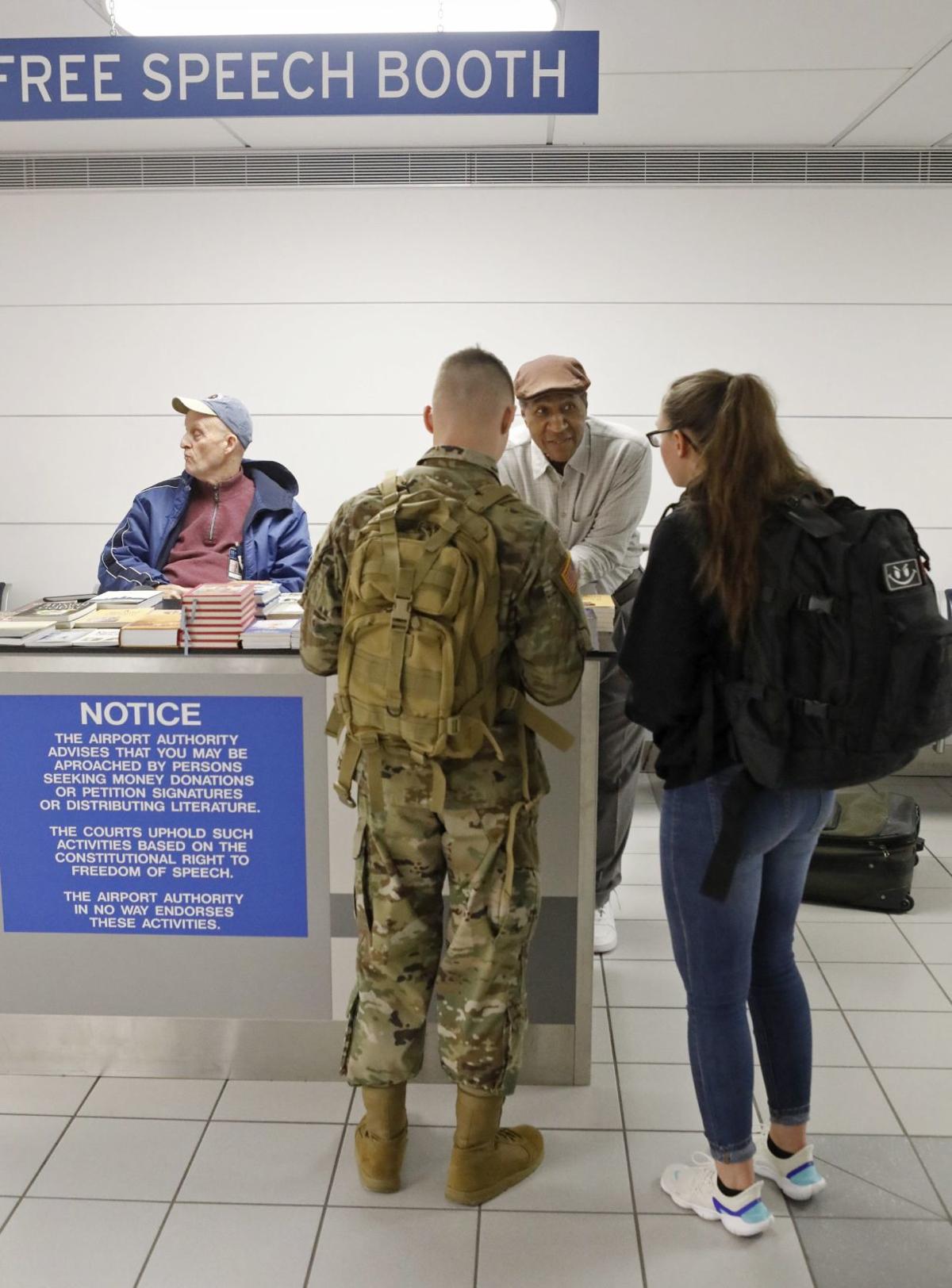 ST. LOUIS COUNTY — Tucked near a rarely used escalator in Terminal 1 at St. Louis Lambert International Airport is a blue sign that hangs over a nondescript stand announcing in all caps the spot’s purpose: FREE SPEECH BOOTH.

Underneath the sign on a recent morning sat Gregory Brown, 66, and Charles Ryskamp, 70, calling out to travelers and asking for donations in exchange for books about their Hare Krishna beliefs. Most passed without a second look.

“It’s like fishing,” Ryskamp said after a woman pulling a suitcase power-walked away from them. “Sometimes they are biting, and sometimes they’re not.”

The two men sit at this booth, on stools they bring themselves, six or seven days a week. For decades they’ve spent hours each day trying to entice people over to their selection of books on topics like yoga and reincarnation, taking advantage of an airport program that offers just about anyone a soapbox to proselytize, protest or raise money for a nonprofit.

Their spot is one of three free speech booths at Lambert that often puzzle travelers with their signs nodding to the First Amendment of the U.S. Constitution.

“Yeah, what’s the deal with these?” asked traveler Tienna Simons after a couple of minutes speaking with Ryskamp and Brown about karma. “Isn’t the whole country kind of one big freedom of speech booth?”

The first of the booths at the airport dates to the 1970s, stemming from years of legal battles over speech rights at Lambert. The disputes largely focused on Hare Krishna members who used to approach travelers throughout the airport offering flowers, candy or books in exchange for donations that funded their temple.

Three years of schedules show the booths are most often manned by the same few groups that have gotten permits from the airport. The regulars include the Hare Krishna devotees, Jehovah’s Witnesses and the United Service Organization military nonprofit, though booths have been used as Christmas caroling stations and for a protest message on occasion over the years.

Is a free speech booth a normal thing to have in an airport or is this just a Missouri thing? pic.twitter.com/Mdv3TLo5P2

“It’s a reasonable accommodation to allow people to express free speech,” said Jeff Lea, the airport’s spokesman. “And we don’t discriminate on who can reserve them.”

Airport management does makes a point to distance itself from the messages.

“The Airport Authority does not endorse the opinions or positions of the users of the Free Speech Booths,” read signs attached to all sides of the stands.

“We get a lot of people asking for directions to the bathroom,” Brown said.

Lambert was among the first airports in the country to attempt to restrict solicitations by Hare Krishna members and other groups when the first version of a free speech booth was introduced in 1977. Then-director Leonard L. Griggs, a former Air Force colonel, came up with the booth idea after years of battles with the Hare Krishna followers.

Griggs told the Post-Dispatch in a 1979 feature that the Hare Krishnas were the most frequent topic of complaints from travelers.

“If they want war, we will give them war,” he commented in reference to a group he said was harassing people.

In the early 1970s, the Hare Krishna followers were distinctive in most airports across the country with their bright orange robes and shaved heads. But by 1979 in St. Louis they had taken to wearing street clothes and wigs to keep people from avoiding them, according to a Post-Dispatch report. For a time, they even carried spray bottles of chemicals to defend themselves when passengers reacted aggressively to their approach, according to the newspaper.

The Hare Krishnas took both the city of St. Louis and St. Louis County to court in an attempt to ensure they could approach travelers. Early court decisions went in their favor, most notably a 1979 ruling from a St. Louis Circuit Court judge who ruled that the right to speech was protected at Lambert much like it would be on a busy street.

A few other groups also sued for the right to protest at the airport, including followers of cult political figure Lyndon LaRouche, who ran for president eight times, and a former baggage handler for Trans World Airlines who wanted to protest his firing with the sign “TWA discriminates against the handicapped.”

But in 1992 the tide shifted when the U.S. Supreme Court ruled against Hare Krishnas who had sued New York City airports over bans on solicitation in terminals.

The court ruled 6-3 that the airport was not a “public forum” like a street, but rather government property with a specific business purpose in which solicitation or speech that could interfere with its core purpose could be placed under reasonable restrictions.

”There are some publicly owned places like military bases or some government office buildings where the courts acknowledge there can be limits on free speech,” said Chad Flanders of St. Louis University Law School. “That decision made an airport one of those places.”

In the years since, Lambert, along with airports in Atlanta, Minnesota, San Francisco and elsewhere, introduced the current iteration of free speech booths as a way to confine speech to certain times and spaces.

Is a free speech booth a normal thing to have in an airport or is this just a Missouri thing? pic.twitter.com/Mdv3TLo5P2

Among the heaviest users of the booths across the country has been Jehovah’s Witnesses, including in St. Louis.

Bill Lane, 73, has been manning booths with his wife at Lambert for about a year. He attempts to talk to people about his faith and hands out pamphlets about roles in a family, among other topics.

Dear man trying to wave me over to the “free speech booth” at the StL airport: No.

The work may seem like a lot of rejection, but Lane spent years going door to door as a Jehovah’s Witness. By comparison, he’s able to reach many more people in the same amount of time at the airport, he said.

”We have to change our approach as life changes,” Lane said. “A lot of people don’t stop, but we’re not pushing something at people. We want them to come by their own initiative.”

The Hare Krishnas at Lambert, Ryskamp and Brown, said their work completes their mission to spread their philosophy and helps to financially support their temple. Hare Krishna, also known as the International Society for Krishna Consciousness, holds certain Hindu beliefs and stresses devotion to the Hindu deity Krishna. It was founded in the U.S. in 1966.

Ryskamp and Brown get donations for about 25 to 40 books they give out each day, they said.

There have been some complaints about the booths at Lambert over the years, including the United Service Organization taking issue with the Hare Krishnas targeting military service members in uniform, Ryskamp and Brown said.

Representatives from the USO have stood in front of the Hare Krishna booths in the past, telling military personnel to stay away.

“They can do that. We can’t stop them,” Brown said. “That is their freedom of speech, but we are practicing ours.”

Charlie Brennan, Mark Reardon and Tom Ackerman — all with KMOX (1120 AM) — each wrote letters supporting a self-storage warehouse in the county.

Crusading king of France is "example of an imperfect man," the statement reads, but did much to help the poor and sick.

‘It’s been too long’: Florissant faces calls for change

The Islamic Foundation of Greater St. Louis in a statement Tuesday appeared to support keeping the Forest Park statue in place.

Missouri reported 20,261 cumulative cases of the virus Friday, including 347 new cases. The confirmed case total in Missouri has risen 2% over the past day, and 9.8% over the last week.

Crusading king of France is "example of an imperfect man," the statement reads, but did much to help the poor and sick.

At the top of the highway, the two co-organizers, along with other attendees, shared stories of injustice living in west St. Louis County.

An eyewitness reportedly saw the woman go underneath the river, according to the fire department spokesperson.

The four officers were invited to Washington, D.C. as part of Fourth of July festivities this weekend.

The guest dined inside the restaurant between 7 p.m. and 9 p.m. Friday

Gregory Brown, 66, greets two soldiers, who declined to be identified, on Thursday, Dec. 19, 2019, at a free speech booth at St. Louis Lambert International Airport. Brown was offering travelers books and pamphlets on Hare Krishna for a donation. Photo by J.B. Forbes, jforbes@post-dispatch.com

Charles Ryskamp, 70, at left, gets a donation from a soldier on Thursday, Dec. 19, 2019, at a free speech booth at St. Louis Lambert International Airport. Ryskamp and Gregory Brown, 66, center, were offering travelers books and pamphlets on Hare Krishna for a donation. Photo by J.B. Forbes, jforbes@post-dispatch.com 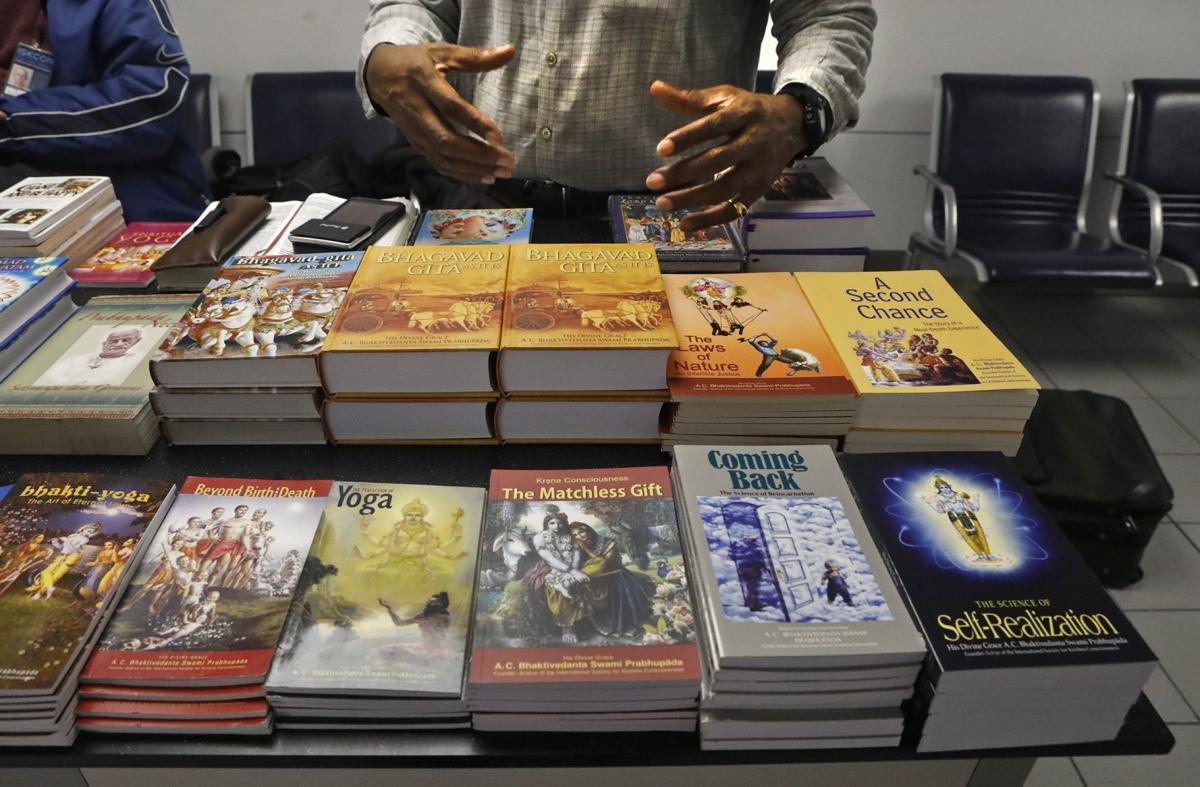 Gregory Brown, 66, talks to travelers about Hare Krishna books displayed on a table on Thursday, Dec. 19, 2019, at a free speech booth at St. Louis Lambert International Airport. Brown was offering travelers books and pamphlets on Hare Krishna for a donation. Photo by J.B. Forbes, jforbes@post-dispatch.com 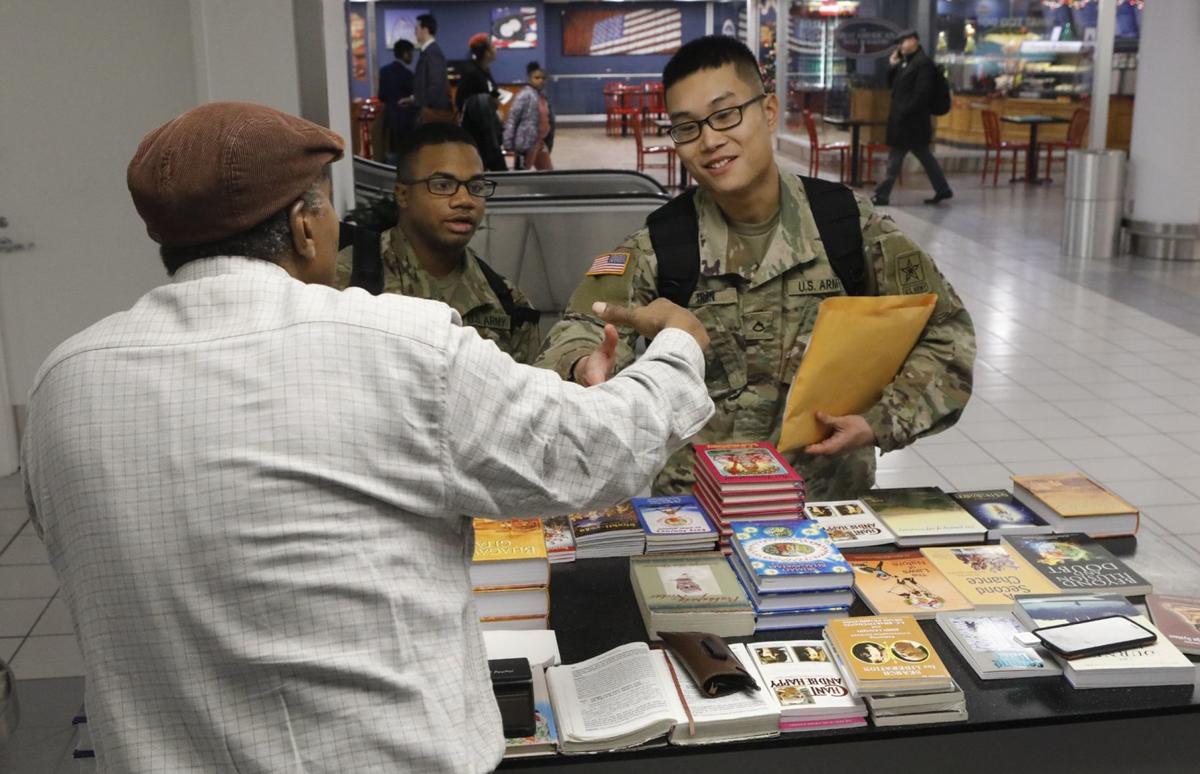 Gregory Brown, 66, greets soldiers Pfc Terrell Wilson, 26, and Pfc Trieu Tran, 23, on Thursday, Dec. 19, 2019, at a free speech booth at St. Louis Lambert International Airport. Brown was offering travelers books and pamphlets on Hare Krishna for a donation. Tran said he had never seen anything like a free speech booth before. Photo by J.B. Forbes, jforbes@post-dispatch.com 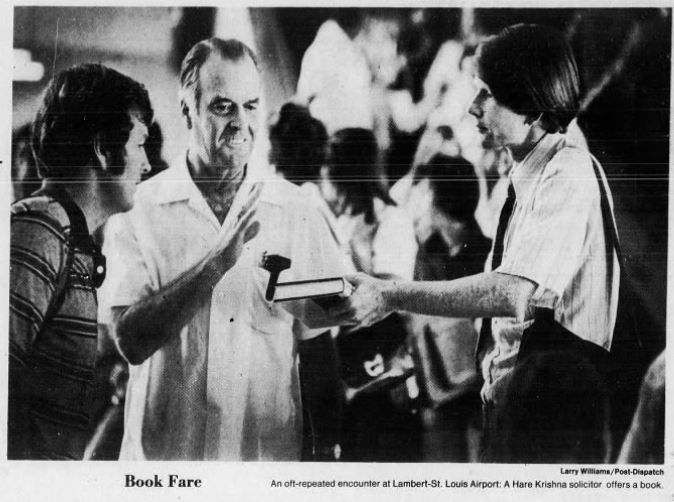 A Hare Krishna devotee offers a book to travelers at St. Louis Lambert International Airport in a file photo that ran in the St. Louis Post-Dispatch in September 1979.