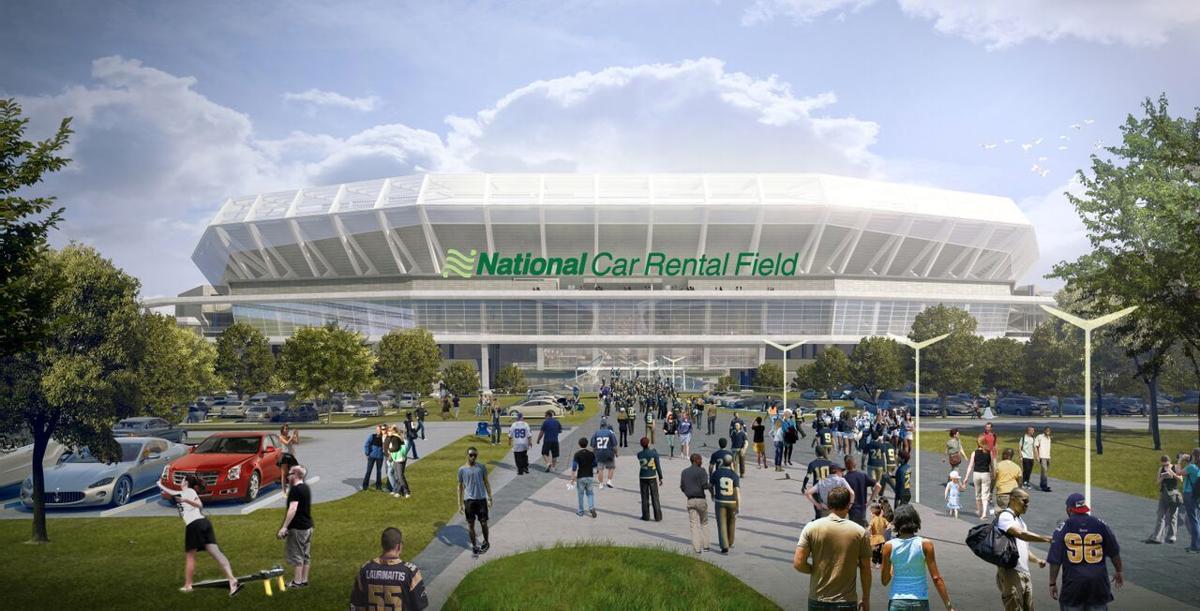 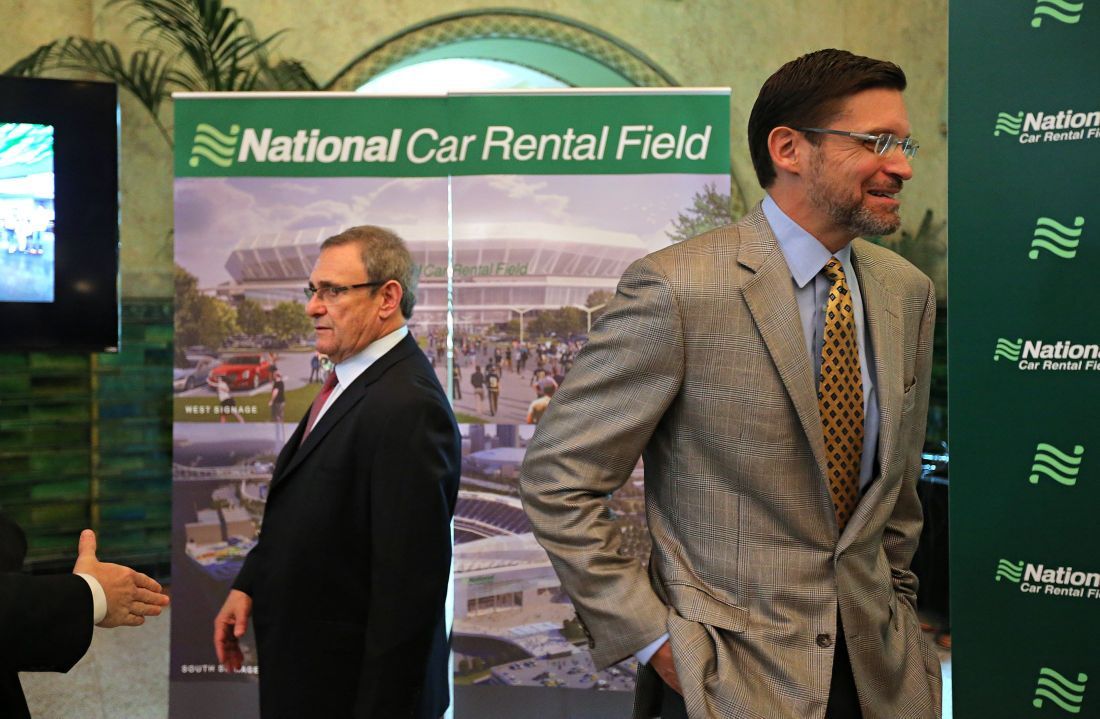 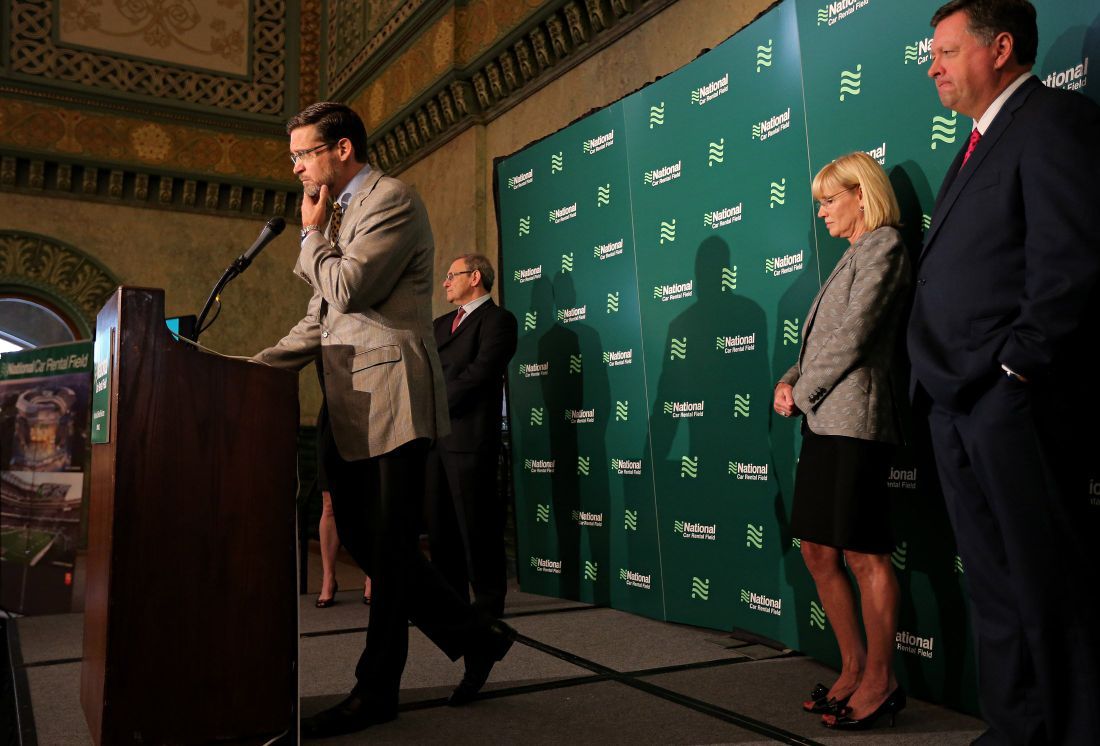 Dave Peacock takes questions about the proposed new riverfront stadium in St. Louis during a press conference at the DoubleTree hotel in downtown St. Louis to officially announce National Car Rental Field will be the name of the stadium on Wednesday, Oct. 7, 2015. Also pictured Pamela Nicholson (second from the right) president and CEO of Enterprise Holdings and Patrick Farrel (right) chief marketing manager and communications officer at Enterprise Holdings. Enterprise Holdings is the parent company of National Car Rental which the new field will be named after. Photo By David Carson, dcarson@post-dispatch.com

NEW YORK • Missouri Gov. Jay Nixon’s St. Louis stadium task force has not yet turned in the financial details of its riverfront stadium proposal to a key National Football League committee as expected, a committee member and influential team owner said on Wednesday.

Bob McNair, owner of the Houston Texans, chairman of the NFL finance committee and member of the league’s Committee on Los Angeles Opportunities, said the L.A. committee anticipated getting what he called “term sheets” on St. Louis’ proposed riverfront football stadium a few weeks ago.

“That’s what we have to see is the term sheet — you know, what’s the firm commitment,” McNair told the Post-Dispatch during a break between sessions of the owners’ October meeting here. “If they’re going to do something, they need to act.”

McNair said he did not know what was holding up the process.

Dave Peacock, a former Anheuser-Busch executive and co-chairman of Nixon’s task force, said the delay was in hammering out the city of St. Louis’ commitment to the project.

“The term sheets define the full scope of financing for the project, both public and private,” Peacock said. And the public side, he said, needs to be “fully conceived.”

NFL owners are in New York this week to discuss the relocation of a team to Los Angeles. The Committee on L.A. Opportunities met Tuesday to discuss timelines, transfer fees and stadium planning progress. The committee is also in charge of evaluating stadium efforts in home markets. Local officials from St. Louis, San Diego and Oakland have all proposed new facilities in hopes of keeping the Rams, Chargers or Raiders from moving to L.A.

On Wednesday, owners took up the discussion, appearing in the vaulted hallways of the Waldorf Astoria only for brief breaks. In general, they kept their opinions to themselves.

“It’ll be interesting to see how everything works out,” said San Francisco 49ers CEO Jed York. “I’ll vote on it when it’s presented.”

Owners said they expect to vote this winter, likely in January. Some said two teams could move this year; others thought one more likely. Several mentioned the importance of the reviews by the L.A. committee.

McNair, a respected NFL owner, broke the mold in speaking with the Post-Dispatch about the ultra-competitive stadium race.

St. Louis city officials have said they’ll cover $150 million of the proposed $1 billion riverfront stadium. But that agreement must be written into legislation, voted on by the city Board of Aldermen, and signed into law by Mayor Francis Slay.

And Slay’s staff has had some concerns about the first draft of the bills. The issue is how to use game-day revenues — for instance, taxes on stadium parking, hot dogs and the like. The city is likely going to issue a new round of bonds backed by $6 million a year from city general revenues that is now going to pay off debt on the Edward Jones Dome, where the St. Louis Rams play. But that’s not going to be enough to cover all $150 million.

So leaders are considering also issuing bonds on the backs of the game-day revenues. Alternatively, the city treasury could pocket the tax increase and pay more out of general revenue toward a second, or larger, bond issuance.

Peacock said task force and city officials are searching for other options, too. “There are a number of ways to make this work,” Peacock said.

The goal, he said, is to avoid overburdening the city budget or hurting the city’s credit rating, which has taken a recent hit.

McNair said the committee hasn’t “seen much in Oakland,” and worried that San Diego is moving too slowly on a public vote regarding stadium financing.

“They’re talking about an election in June. And I think that would be too late,” he said of San Diego. “They could have had one in January, but they’re not ready for that.”

“We hope in the next few weeks,” McNair said, “we’ll have firm commitments from these cities as to what they’ll do and what they won’t do.”

NFL Executive Vice President Eric Grubman later clarified that San Diego sent the league a term sheet last week. But Grubman said he has not yet examined it, and the league has not responded.

At day’s end, NFL Commissioner Roger Goodell urged haste in St. Louis. “It’s very important for them to stay on a timetable,” Goodell said. “It’s very important to have a proposal that’s actionable, and that brings certainty. We have said that repeatedly. They’ve done a terrific job. But ultimately, it’s making sure that we have a proposal that meets those standards by the end of the year.”

Peacock acknowledged the deal with the city “needs to be very soon.”

He said he expected aldermanic bills to be ready as soon as next week and no later than the end of the month; He is also waiting to hear about state brownfields tax credits, for cleaning up polluted land.

“Term sheets” will be sent to the NFL, he said, immediately thereafter.

Editorial: Time for stadium boosters to turn over their cards

It's crunch time for the new stadium proponents.

Area was a thriving Native American urban center before St. Louis was settled.

Edward Jones Dome will cover second half of city dollars through a naming-rights deal.

$150 million for stadium too much to 'shoulder,' says city comptroller

“The city cannot agree to fund the $150 million proposed by the stadium task force without extending itself well above the current $6 million commitment,” Green said.

Next week’s presentation in New York could involve as many as 17 team owners.

The 20-year naming rights deal is worth an average of $7.9 million a year

The beat goes on for Rams

Music during practice continues after upset win at Arizona.

Event will provide a forum for fans and others in the community to ask questions and express their views directly to league exec Grubman.

Dave Peacock takes questions about the proposed new riverfront stadium in St. Louis during a press conference at the DoubleTree hotel in downtown St. Louis to officially announce National Car Rental Field will be the name of the stadium on Wednesday, Oct. 7, 2015. Also pictured Pamela Nicholson (second from the right) president and CEO of Enterprise Holdings and Patrick Farrel (right) chief marketing manager and communications officer at Enterprise Holdings. Enterprise Holdings is the parent company of National Car Rental which the new field will be named after. Photo By David Carson, dcarson@post-dispatch.com